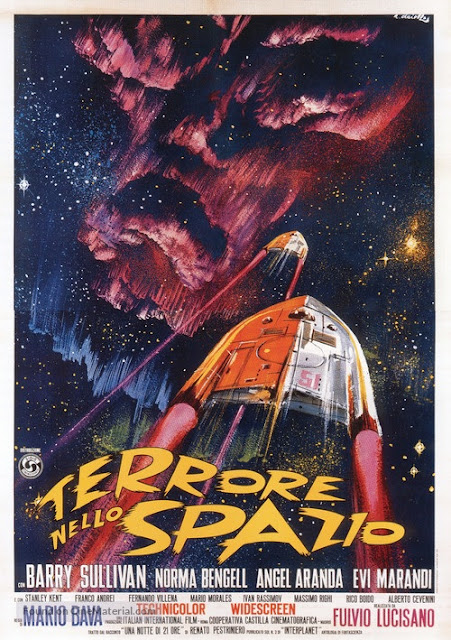 A pair of spaceships are investigating a distress call on the desolate planet of Aura. One lands, and after reporting successfully at first, communication is abruptly cut off, and their concerned friends go down after them. They find a hostile planet, dominated by an unseen enemy. When the crew least suspect, it tries to control their minds. Whatever the force is, it's deadset on killing all the humans, and escaping the planet for somewhere fresher... 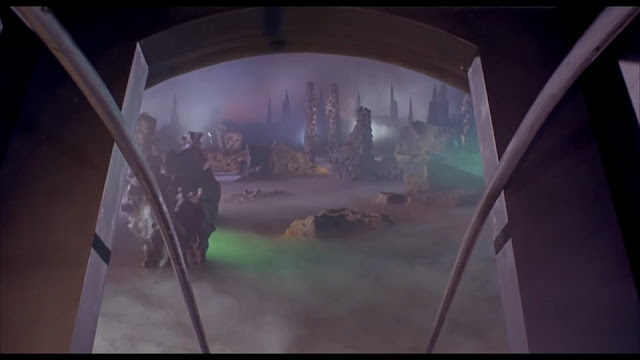 Planet of the Vampires is quite a departure from Italian director Mario Bava in that it's not a routine horror, thriller, or , but instead predominately sci-fi! The movie does still feature all the unmistakable touches his works have come to be known for. There is a strong atmosphere of terror, and an increasing body count, not to mention the outstanding visuals. 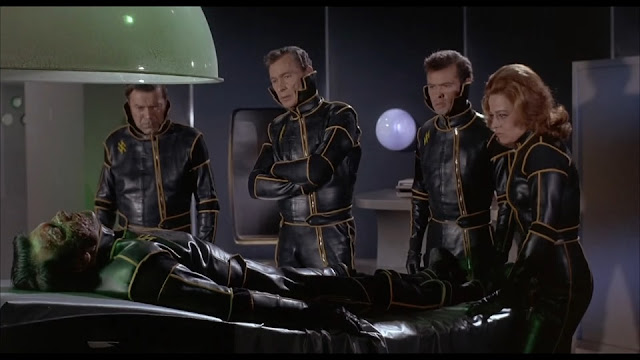 Planet has a pretty minimal story. A bunch of snazzy astronauts land on a planet, and amble about for 90 or so minutes. This works in some ways. For example, the movie always holds your interest, and for the most part it does work.
Where it falters a little is in some of the more boring stretches. The problem I feel is that too much happens offscreen. From important moments, to deaths of main characters, a lot occurs on the periphery. And since we're always following the point of view of the humans, we never see beyond them. On one hand it does help up the suspense, when we know as little as the heroes do. But on the other hand, it verges on too little! 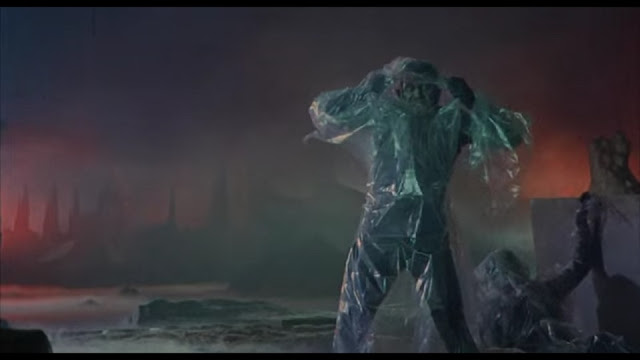 One of the bigger problems the movie faces is the complete lack of vampires! We get invisible aliens, and reanimated corpses, but no fangs, no blood sucking, or anything of the like! One can't help but feel a little disappointed. The original Italian title is better in this regard, translating to the more broad Terror in Space, which makes no such promises.
The ending is quite a surprise! If you really think about it, it doesn't make much sense, in a few ways, but the content is good enough for this to not matter. 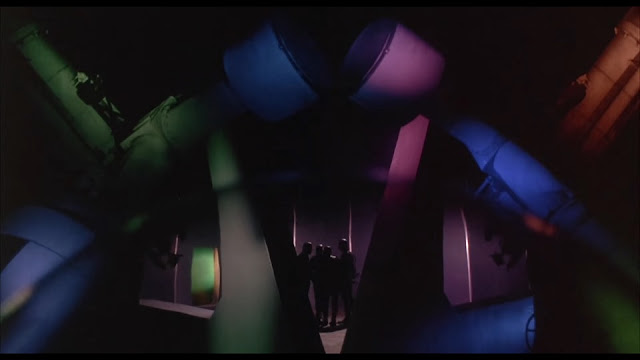 The characters are an alright bunch. They don't have the greatest depth, and half of them die like it's nothing, but they do get some good moments, like the captain's private admission of fear as he records his log, or Tiona's weakening sanity upon seeing her undead crewmates. Overall though, I really feel the movie could've used some context for who any of these people are. I understand not revealing too much, to a degree, given the surprise ending, but give us a little, Mario! 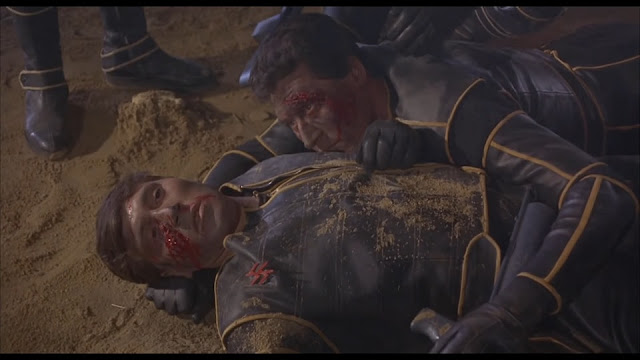 The actors all do fine jobs. Being an international production we have actors from all over the glove here. The lead is classic film stalwart Barry Silver. Being an Italian production marketed in the U.S. it was entirely possible he was really Bartolomeo Silvanio, but nope. He and all the others carry the movie well. 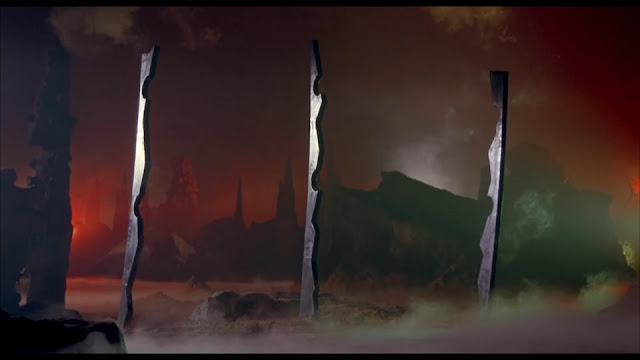 Mario Bava's direction is superb. Shots are crafted well, with moments of beauty, and eerieness. The lighting and colour go hand in hand with the visuals
The general aesthetic is neat too. Something that has long earned this film admirers is how it doesn't try to hide from any comic book inspirations, but instead uses them to the fullest, embracing those more colourful elements. And because of this, it gives them a seriousness that you always believe.
As with many other Bava films, the score is low-key, and have a heavy focus on ambient noises. This builds the atmosphere very well, and right out of the gate you can tell this isn't your typical sci-fi flick. 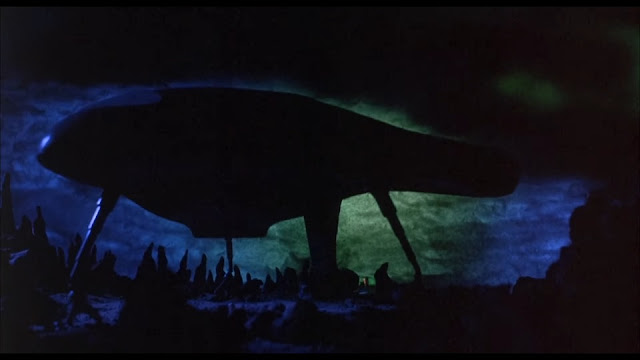 The effects in Planet of the Vampires are great! We've got some effective, if minimal, violence, great corpse make-up, and some alien skeletons in one of the film's most interesting scenes. Space is portrayed well, as are the crafts, and how they interact with their surroundings.
The most astounding thing is hearing about how tiny of a budget this was shot on! Decades later its portrayal of a truly alien world is praised, and yet according to Bava, all he had was a couple of plastic rocks, a cheap backdrop, and a little bit of trick photography and forced perspective. It really goes to show that even if you have next to nothing, it all depends on how you use it. 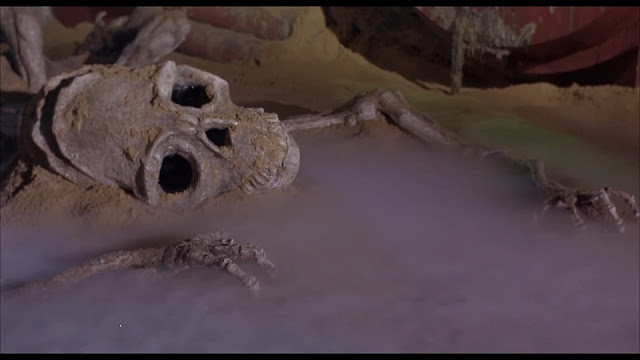 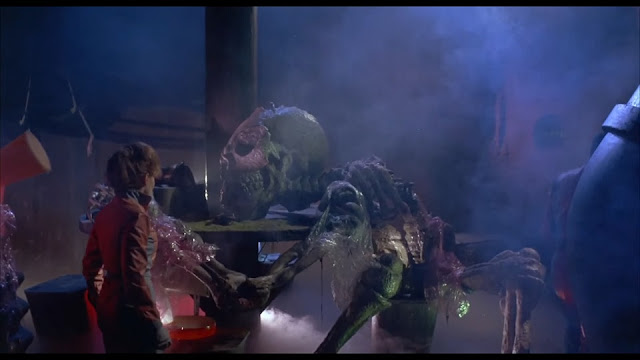 Planet of the Vampires has had a lasting legacy throughout the years. It was one of the bigger inspirations for the 1979 classic Alien (thought it would take decades before the creators admitted this, the cheeky bastards), and its DNA can be felt as far as movies such as Event Horizon, and Pitch Black. Despite having inspired so much, it still feels fresh and unique as you watch. Whatever flaws it might have are made up for by this fact. It remains a classic of Italian sci-fi...
Posted by Chris at 7:27 AM