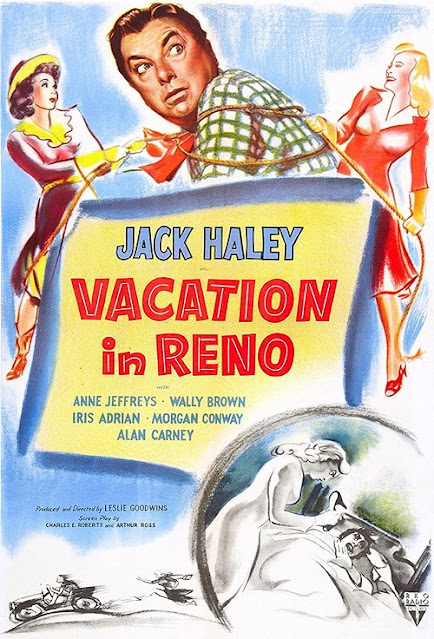 Jack Carroll is a happily married man full of harebrained ideas. After he and his wife pretend to fight, to smooth over their constantly arguing friends, they end up sparring for real and Eleanor leaves. Jack decides to go to Reno to hunt for some buried treasure, getting embroiled with a bank robbery along the way... 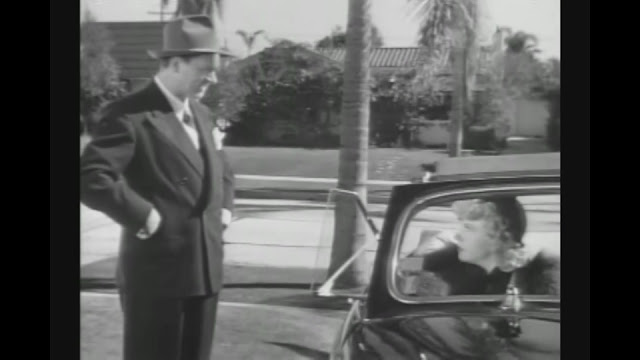 Vacation in Reno is a good example of 1940s comedy. Low budget, brief at only 59 minutes, and thoroughly entertaining. It's funny, but sometimes in an awkward way, so it can be hard to watch in places. You'll cringe just as much as you might laugh. Luckily the movie doesn't dwell on this, and the majority of the action is just plain fun.
It does get a bit confusing as it goes, what with bank robbers, buried treasure, marital confusion, and another lady. But to the movie's credit it doesn't force all this down our throats all at once, but builds to it gradually. Also nice is how expedient it is. Jack finds the buried treasure quickly, the crooks get the dope on him quickly, the married friends reconcile quickly, etc. Nothing is ever drawn out, which does lessen confusion for the most part. 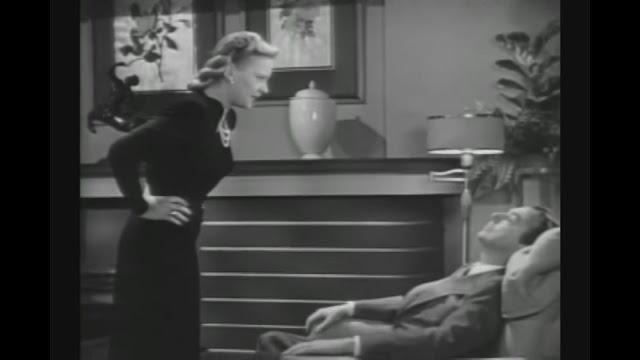 Since the plot is all set into place by the halfway mark, the movie from then on is really just a set of comic incidents one after another. Amusing for sure, although story does kinda take a back seat.
Jack is a likeable, if hapless, protagonist. He's never too stupid, and always proactive. When he and Eleanour fight for real, it's over an insult he levies at her mother. I found it amusing how Jack never actually retracts that statement. He'll ring up and after she opens with "It's your big fat porpoise of a mother-in-law!", he just continues with "Is Eleanor there?".
Eleanour is a nice girl. Always reasonable, she is occasionally fiery, but never enough to not listen to reason. She's also pretty badass in the climax! One last thing to note about the pair is their separate beds! Typical 1940s censors. We wouldn't want to see a married couple 'living in sin' after all. 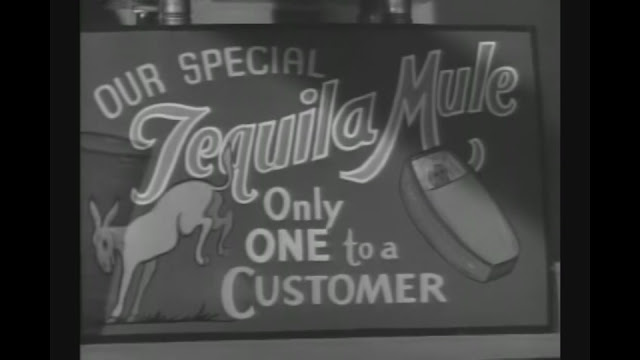 Their friends, a married couple, are very funny, with their comic spats and histrionics providing much amusement. Fortunately they don't fight too much, and never become unpleasant. Unfortunately they also disappear entirely from the action. I get why, and at least it makes room for the rest of the cast, but it's still a bummer.
The criminals are decent antagonists. Out of the three, Iris Adrian's Bunny gets the most screentime. They're rough, conniving, and a good mix of clever and dumb. 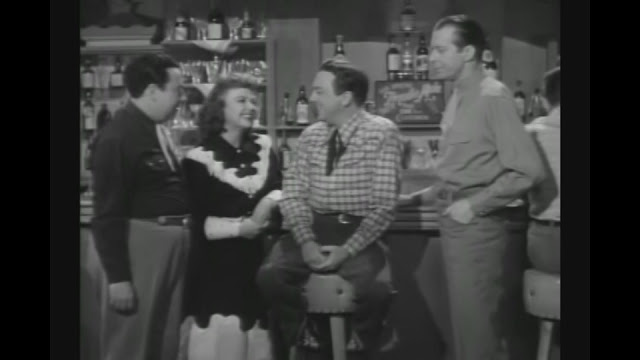 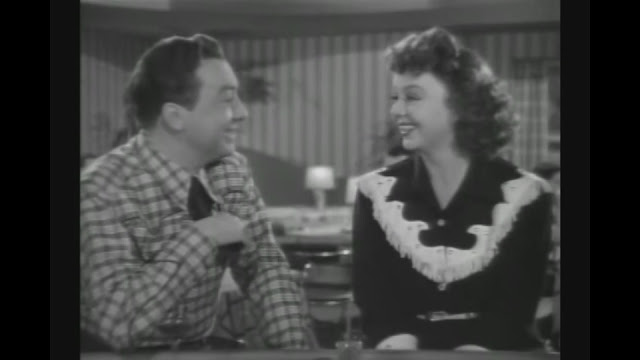 Other hotel guest Mrs. Dumont is a total pushover. While she's a rich society dame and her husband's a rough sailor, all it takes is for him to raise his voice and she cowers between her legs with repeated Yes dear's. At first I was annoyed by her character for this reason, but as the movie progresses she's forced into events that really test her resolve, and encourage her to stand up to her brutish partner. She probably had the most engaging arc out of any character in the film! It does kinda go unresolved, but it's ok for the most part.
The comedy in Vacation in Reno is very good. There's snappy dialogue, sight gags, and plenty of slapstick and misunderstandings to go round. My favourite joke involved a sneeze, and where you think one thing is gonna happen (knowing it'll be hilarious), but then the movie throws a curveball and does something else, equally funny. 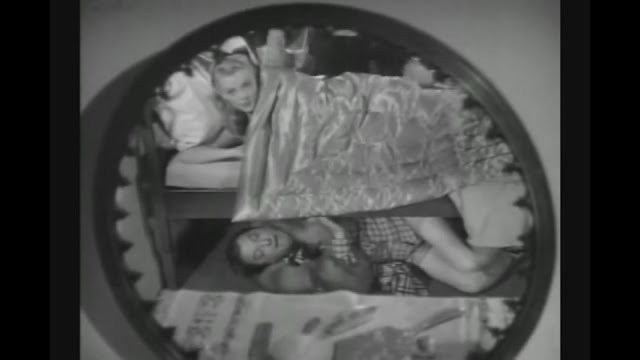 The direction is fairly standard, in a good way. Nothing bad, all reliable, and there are a few neat shots here and there! The dude ranch provides a good setting, and a nice minor-western feel. The film also has some amusing touches with sound, from chipmunk voices in one scene, to a very animated phone call.
The music is suitably jaunty. It's old stock music I think, but it's good stock music, and fits the movie perfectly. It also gets a few rescorings throughout, depending on the vibe or location. 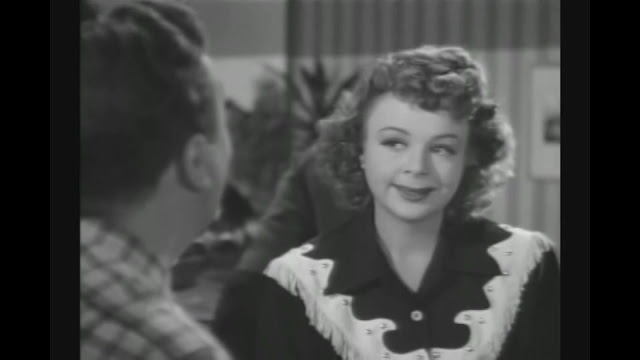 The actors all do well. Jack Haley is a fun lead, as is Anne Jeffreys. Wally Brown and Claire Carleton are amusing as the acid-spitting couple. Her voice is so distinctive I actually thought she was Iris at first. On that note, Iris Adrian shines in her role, providing a fun antagonist, along with the guys playing the other two mugs. The remainder of the cast is good, from Myrna Dell as the socialite, to Jason Robards (Sr.) as the Sheriff. 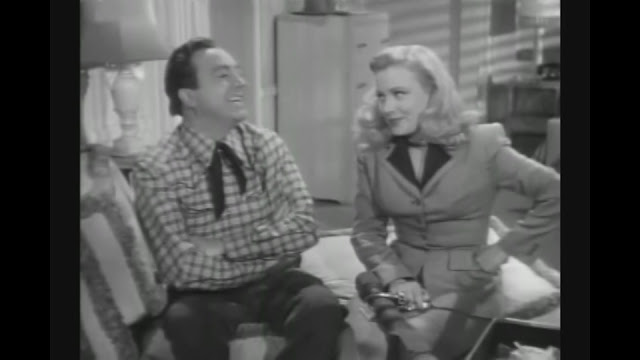 Overall this is a good movie to check out. It's a nice way to kill an hour, and highlights the talents of all involved...
Posted by Chris at 7:33 AM