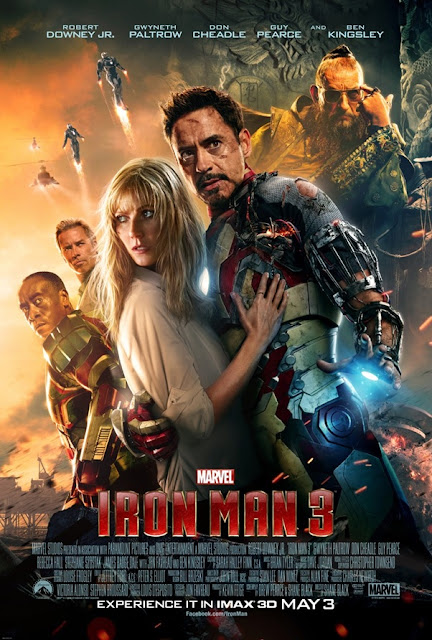 Warning! This review contains spoilers for Iron Man 3 and 4...

Iron Man 3 centres on multi-millionare and scientist Aldrich Killian (Guy Pearce) and his dangerously unstable Extremis project, while Iron Man 4 focuses on a terror threat by The Mandarin (Ben Kingsley) that's shaking America to its core!...


Despite Iron Man 3 being a good movie, I was REALLY pissed off with it, thanks to the ridiculous twist it has halfway through!

So, The Mandarin is a comic book character who is one of Iron Man's most popular and recurring enemies, and he was due to be in Iron Man 3. After the AWESOME trailers, people were hyped to see The Mandarin on the big screen for the first time!...And were then eye-mutilatingly disappointed/horrified when they got to Iron Man 3's halfway point, where it's revealed that The Mandarin in this movie was just an actor hired by the true villain to serve as a diversion! The film might as well have said: "Dear Iron Man fans. Get fucked!"

A lot of what makes the twist so infuriating is that minus a couple of short scenes, the movie is never about The Mandarin. It's always about Killian and Extremis, and it never tries to hide the fact that he's the movie's big bad. Even people who don't know the twist going in would be able to see it coming because of this!

Also, the scenes with The Mandarin are GREAT, tense stuff, with awesome acting, and great story! They were so good that a movie about them would have been awesome! But instead, we got an insulting twist, and probably the biggest missed opportunity in all of the 'Marvel Cinematic Universe'.

What's worse is some of the people who try and justify the change. I've read some claim that The Mandarin is a one-note, outdated, nothing, heavily racist character who could not be salvaged for a movie in any way! Anyone who's thought that needs to have their shins broken! Not only is The Mandarin NOT just a one-note nothing villain, but he sure as hell isn't a racist caricature! Given that he was created in the 60's, he was probably invented by writers with a yellow peril mindset, and I don't know if the character was racist back then (it's likely, given what comics were like back then), but since then, The Mandarin has been more than just some cookie cutter Fu Manchu villain! Even the sometimes-mess that was Iron Man: Armoured Adventures handled The Mandarin pretty well-and fucking characters up was that show's forte!*

*That is to say, it was great at screwing up its characters in its own continuity, not in the comic's continuity.

Another supremely annoying thing that some people are saying is that the movie DOES have a proper Mandarin in the form of Aldrich Killian, thanks to a moment near the end when he yells "I am The Mandarin!". THAT WAS A FIGURE OF SPEECH! What he meant was that he was the power behind the puppet that was Ben Kingley's Mandarin!

They also say that Killian is simply a different interpretation of The Mandarin, and that we should be happy about it...Uh-huh, yeah right! I don't even have to point out why that's a load of shit! Aldrich Killian bears literally nothing in common to The Mandarin, so anyone who condescendingly calls me out for "daring to not love this movie simply because its interpretation of The Mandarin is not %100 percent accurate to the comics" can go stuff themselves!*

*Yeah, you'll notice that I'm pissed at a certain person! I'd provide a link, so you could see their awful article about Iron Man 3's Mandarin for yourself, but I'd rather not. I'd probably feel like an asshole if I did that.

Ben Kingsley's Mandarin may have lacked a few things that the Mandarin of the comics had, but he was still recognizable as The Mandarin, and I'm sure that interpretation would have done the character great justice if they'd let him have his own time to shine, and saved him for Iron Man 4, instead of destroying the character of The Mandarin in this continuity for the sake of a few jokes.


Soooo, time to get away from all that and talk about the rest of the movie.

For one, many people are complaining that the movie had barely any Iron Man action, and too much of suitless Tony Stark. To which I say, it totally did have enough! As far as I'm concerned, this movie definitely had enough Iron Man action. And anyway, the whole point of this film is how Tony does without a suit for a large portion of the film.

The movie DEFINITELY wasted AIM though! In the Iron Man comics-cartoons, etc., AIM is a huge evil corporation that's constantly making trouble for everyone! In this movie, AIM is just the name for Killian's company, and never resembles its comic counterpart in the slightest.

One other big problem is that the villain, Killian is barely developed. All you ever know about him is that he's a scientist, and he's evil. Also, his death is REALLY lackluster! Pepper just blasts him through a wall, and that's the last we ever see of him. The movie seems to assume he's dead, but considering what he survived involving Tony's explosive suit, I really doubt simply being blasted through a wall'd do any lasting damage!

Another issue is that characters Pepper, Rhodey, and Maya Hansen are very underused. Also, Tony's PTSD never affects the plot, it's just a couple of random scenes when he has anxiety attacks when New York is mentioned, so I have to wonder why it was even included! It would have been great if it played out more in the movie, but it didn't.

As for Extremis, it was handled well. Sure, Tony didn't get injected, and if he did, he wouldn't have been able to process information at super speed, nor could he have had near-telekinetic control over all technology, but Tony has his AI buddy JARVIS, as well as other handy gadgets, doing all those things for him anyway, so there was really no need for Extremis to have that ability here.

So, that's enough outta me about Iron Man 3. I'll be back tomorrow with my reviews for The Addams Family, and Parks and Recreation!
Posted by Chris Hewson at 9:17 AM