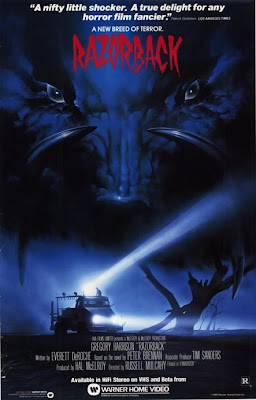 Jaws on Trotters! That's what the making-of special feature on my DVD of 1984 Australian horror/thriller flick Razorback is called, and it sure is a great description of this movie!

Razorback, one of the first films directed by former music video director Russell Mulcahy (Highlander, Blue Ice), and is about a giant razorback pig roaming in the outback, destroying whatever, or whoever's in its way...


The movie opens at a homestead nearby the town of Gamulla, where Jake Cullen (Bill Kerr), a local, is looking after his baby grandson. They're having a good night, but things take a turn for the worse when the house is totally demolished by a freakishly large feral boar, which carries the baby away to its death.

Cullen is put on trial, and, refusing to believe his story of a giant pig, most people assume that Cullen murdered his grandson. The trial starts, and naturally, this is small town Australia, so the town's courtroom is single-storey, smaller than my house, and besieged by flies!

Cullen's story is laughed at, but he's released anyway, due to lack of evidence that he killed his grandson.

Two years later, American journalist Beth Winters (Judy Morris), who specializes in cases about animal cruelty, goes from New York to Australia. She goes to Gamulla to ask around about the illegal slaughtering of kangaroos, which doesn't please the locals one bit, namely Benny (Chris Haywood) and Dicko (David Argue), two brothers who run a meat-packing factory-abattoir together, who toss darts near Beth's head. 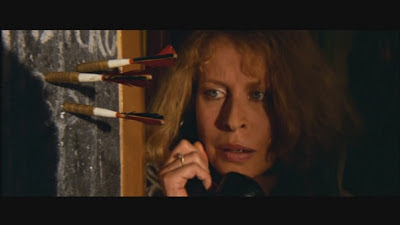 In most countries, that'd be considered a threat, but here, that's just a traditionial Aussie greeting*!

*I may or may not be slightly embellishing that.

Soon after, Beth follows the brothers to the meat-packing factory and snatches several photos of them doing their gory job. They see what she's doing and chase her, but she escapes. She's not so lucky later that night, however, as when she's in a secluded location, the brothers drive up and ram her car up, and are about to rape her when the razorback shows up. They make a fast getaway, and Beth is...Well fuck you too, movie, for wasting my goddamn time with this Beth character! 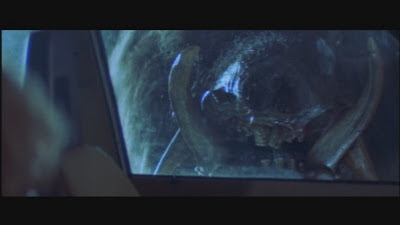 Yep, the film establishes Beth's character, follows her for close to half-an-hour, and then suddenly kills her! Movie, that worked for Psycho, it doesn't for you! *seethe*

A short time later, Beth's husband Carl (Gregory Harrison) arives in Gamulla, intent on finding out what happened to Beth. Carl locates Jake Cullen, and the two have a talk. Cullen recommends that Carl start his search at the meat packaging, so Carl heads there, pretending to be an opal miner, and talks with Benny and Dicko. 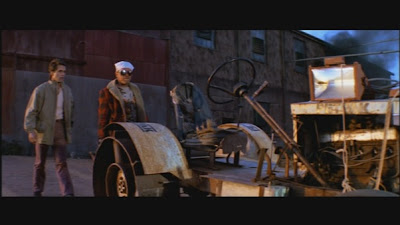 The three go out for a kangaroo hunt come nightfall, and once the injure a kangaroo, the disgusted Carl puts the animal out of its misery. The brothers, who wanted to take the kangaroo back to the factory alive, so it wouldn't be as stiff as a board while they processed it, are annoyed with Carl, and leave him behind with the animal and some carving implements, so he can skin and gut the animal.

Carl instead goes to sleep, and once he comes too, a boar stampede starts up, forcing Carl up a windmill, then into the outback.


Carl stumbles around the outback, and then suddenly WHAT THE HELL! 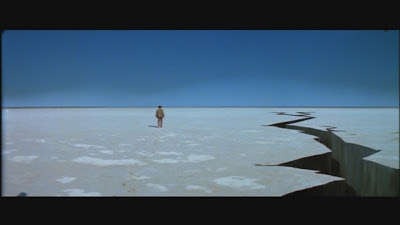 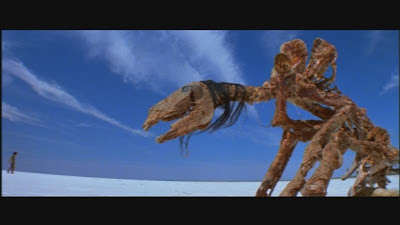 Huh?! Has Carl phased into the universe of Robot Unicorn Attack?! Or the Jawa-minions' planet from Phantasm?! WHY ARE HORSE SKELETONS BREAKING OUT OF THE EARTH AND ATTACKING CARL?! 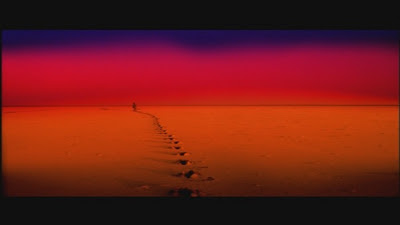 Carl comes to, and continues walking until he comes across a house. He approaches it and stumbles in on a woman (Arkie Whiteley) who's having a shower...outside! Lady, what the hell?! Who showers outside, and in broad daylight?! He collapses, and when he comes to, the woman, Sarah, an associate of Jake Cullen's, who talks with him. Once Carl mentions vaguely seeing a giant boar, Sarah quickly calls Jake over. Now having a rough idea of where the beast that kiled his grandson and ruined his life is, Jake goes on the hunt... 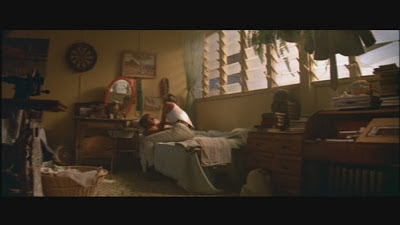 So, what did I think of Razorback? Well, for a start, the killing of Beth was just pointless! For one, we could have spent those 25 minutes following the real main character, and also, the film already had an Ahab-type, it didn't need two! As opposed to Psycho, where the killing of Marion Crane really jumpstarted the plot, Beth's fake main character seemed very unneeded. I did become accustomed to the protagonist switch eventually, thanks to Gregory Harrison's acting. I still find it really annoying though.

The acting is all good, the highlights being Gregory Harrison, Arkie Whiteley, and Bill Kerr. Chris Haywood and David Argue are good as the psycho brothers, but when it comes to laughing, they're weirdly terrible. 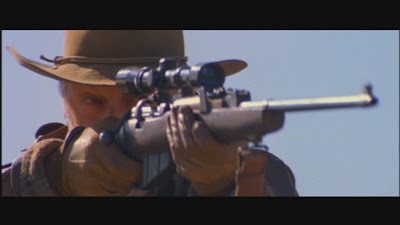 One of the best things about Razorback is the soundtrack, composed by Icehouse's Iva Davies (all my readers outside of Australia, you're scratching your head right now aren't you. It's to be expected. Just like I didn't expect anyone outside of Australia would get the Eskimo Joe joke in Django Unchained!). The scoring is plain fantastic at times!

One of the bigger problems I had with Razorback is that it's WAY too over-stylised! No more-so is this apparent than in Benny and Dicko's factory (which appears pretty frequently)-it's always really dark, there's smoke and blue lighting everywhere, and there's even an industrial fan with red light pouring up from under it! This is what happens when a music video director forgets he's directing a damn movie! The effects and visuals during the halucination seuence are great though! 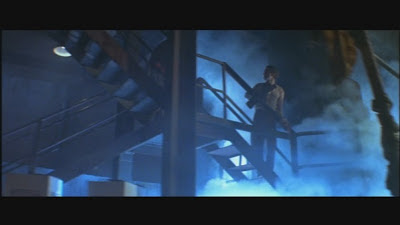 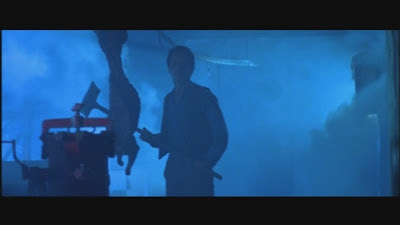 The biggest problem is that the killer pig is barely in the damn film! That wouldn't be too bad, considering the killer shark was barely in Jaws, but Jaws was at least about a shark! Razorback is mostly about Carl either doing random stuff, walking through the outback, and asking about his wife. And when the film's nearing its climax, he's going after Benny and Dicko for revenge, not the pig!

A couple of little things about Razorback are the really weird segues it uses from time to time, and at one point, there's a jaws-style zoom-in! 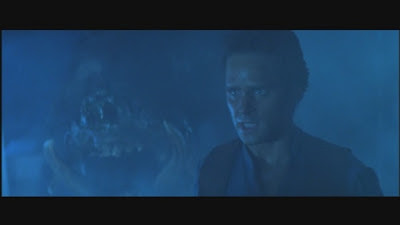 Onto the monstrous razorback himself, the effects for it look very good!...From what can be seen of them! The razorback is almost never onscreen for longer than a split second. The effects whenever houses are attacked and torn apart are also very good!

So, while it did annoy the living hell out of me at times, this is the first movie of my May Monster Madness Aussie horror run that I can wholeheartedly recommend! It's got great effects, greater scoring, fine acting, and some kickass action! What more could you want?!