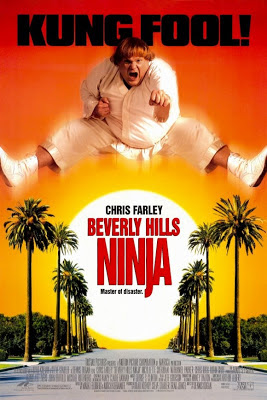 When it comes to movies, it's always fun to rediscover childhood favourites that you haven't seen in forever! Such was the case with me and 1997 Chris Farley flick Beverly Hills Ninja!

I watched this movie all the time when I was a kid, but somehow forgot all about it as life went on. I recently remembered about it somehow, and after nostalgically remembering all about it, I tracked the movie down, and gave it a watch!

So is the movie actually any good, or did I just think it was back then because I was a dumb kid?...The former! Definitely the former!

The movie opens with a voiceover from the ninja clan's sensei (Soon Tek Oh), who relates the tale of the Great White Ninja, who, according to prophecy, will be a great ninja hero. He then goes on to tell about how a white baby in a chest washed along his dojo's shore from a shipwreck .

The child, Haru, grows up to be the black sheep of the ninja clan in more ways than one. Not only is he white, but he's overweight, a bit simpleminded, and very clumsy. After a (hilarious!) ninja training montage, the film cuts to the graduation of the clan's trainees to ninjas, save for Haru.

Later that night, the sensei and all the ninjas go out on a training exercise, leaving Haru alone to keep guard at the dojo. 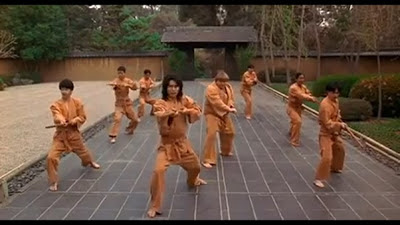 While Haru's keeping watch, a woman, Sally Jones (Nicolette Sheridan) comes to the dojo, wanting help from the ninja clan. She suspects her boyfriend Martin Tanley of something, and, thinking he's a ninja, she hires Haru to investigate. 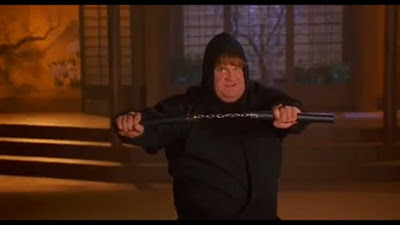 Haru goes off to the city on his own and locates Martin Tanley (Nathaniel Parker). He follows Tanley to a criminal deal. Tanley is buying 10,000 Yen plates from some guy, but the plates turn out to be of just one side of the Yen bill, as the other plates were stolen by other crooks. The angry Tanley shoots the seller, and kills him. Tanley dumps the body, which falls onto Haru's boat, and when Haru flees, he's seen by police, who think he's a murderer. 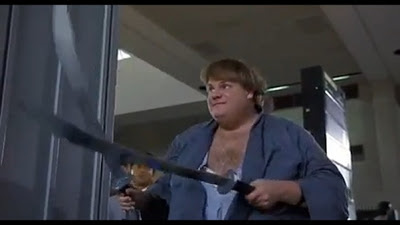 Haru manages to evade the police, and back at the dojo, the sensei reveals that 'Sally' is really named Alison Page, and he thinks that she decieved Haru in order to frame him. In order to prove himself to his clan, Haru goes off to Beverly Hills (thanks to a hotel lobbycard left by 'Sally') to find Martin Tanley and bring him to justice. 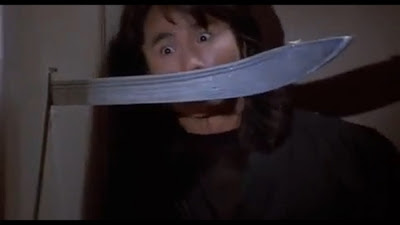 Haru arrives in Beverly Hills, and first goes to a hotel. After setting up shop in his hotel room, he befriends a bellboy, Joey Washington (Chris Rock), who is ecstatic to be meeting a real-life ninja. Haru teaches him a few tips on how to be a ninja, and soon after, Chris Rock vanishes from the movie, thankfully, because his voice is torture!

Haru soon locates 'Sally', and finds out that not only did she not set him up to be framed, but that she's dating Tanley so she can find incriminating evidence to have him arrested on, as he murdered her sister.

Meanwhile, as a gang war is brewing between Tanley's gang and the one that stole the other half of the plates, Haru's investigations get him, as well as Alison, in more and more danger... 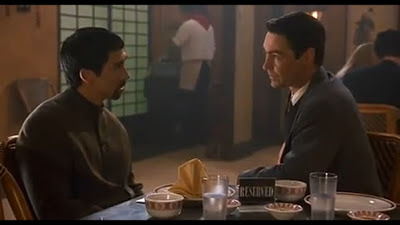 Beverly Hills Ninja is pure slapstick, and it's incredibly entertaining slapstick! The plot is is simple, but well-written, and the ninja clan is so cool that this movie makes me depressed that ninjas stopped existing several centuries ago.

The film has plenty of action too, which is definitely a plus!

Chris Farley is great fun as Haru. He carries the film on his shoulder, and succeeds. Nicolette Sheridan is a good addition, and Nathaniel Parker is very good, albeit a bit underused as the film's villain. One thing's for sure, he's definitely not as bland as he was in that maudlin Inspector Lynley Mysteries TV series! 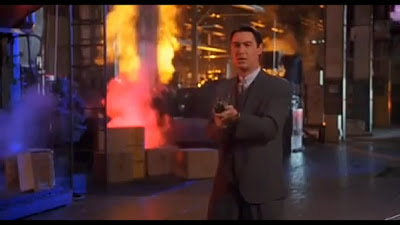 Chris Rock was intensely annoying to me at first and made me want to tear my eyes and eardrums out, but he sorta grew on me. Plus, he's not in it for a great deal either. Haru teaches Rock's character a few things, then tells him to not participate in the mission due to its danger, and Rock is absent for almost the rest of the movie.

Soon Tek Oh and Robin Shou are both great, with the former being a good mix of straight and funny, and the latter getting some good physical comedy (in more ways than one). The rest of the acting is all fine. 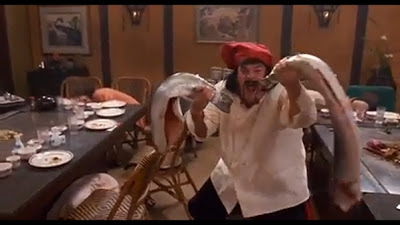 The soundtrack is all great stuff! Namely that Kung Fu Fighting song (You KNOW the one I mean), which makes a cool fight scene even cooler! Though there's a cover of it over the end credits which is pretty decent.

So, to finish, if you're ever feeling down about the fact that secret clans of ninjas don't actually exist, just watch Beverley Hills Ninja on a loop! It'll give you the temporary ninja fix you need!
Posted by Chris Hewson at 9:25 AM