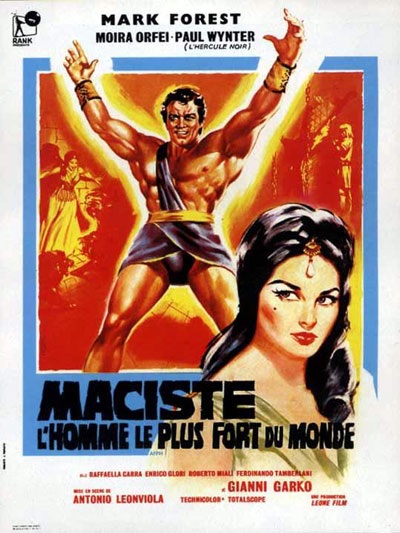 Mole Men Against the Son of Hercules occupies a somewhat special place in my moviegoing heart, not because I particularly like the movie (indeed I only saw it very recently), but it was one of the first obscure films I actually researched online when I started to get into movies as a youngin'! For that at least this is a memorable title for me. As for how it fares as an actual movie, though? Well...

In the ancient days of Greece, countless villages have fallen victim to the evil mole people, who kidnap the survivors of their conquests to be slaves in their diamond mine. The famous hero Maciste hears of this crime and swears to seek justice and take the mole people down. Aided by a fellow strongman named Bangor, Maciste infiltrates the caverns of the mole men as a prisoner, intent on freeing the prisoners and ending the reign of their sadistic queen Halis Moyaab. She has other plans though, and wishes to either see Maciste dead, or reigning by her side... 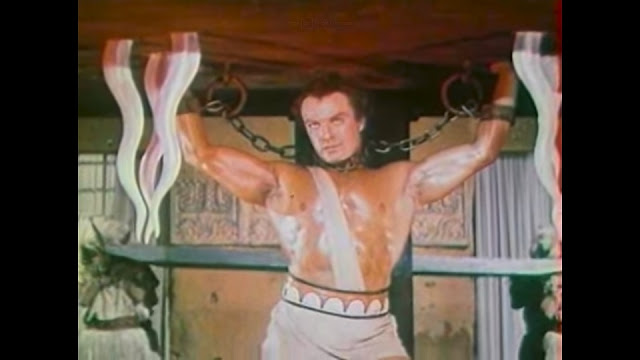 Mole Men Against the Son of Hercules is a slog to get through! The plot has little substance to it, and with the hero becoming a captive of the mole men so early, it leaves one to wonder how the rest of the film is going to do to pad out its runtime. What indeed! The majority of scenes are boring conversations, or the leads being tortured. Some of these scenes are good, like the weight setpiece, but others are just a draaaaag.

Maciste is a pretty unremarkable protagonist. Not very charismatic, and just full of great ideas, like infiltrating the Mole Men by getting captured. Not pretending to be captured, but actually taken prisoner, and thusly pretty helpless. There are also many scenes where his slow to act behaviour gets lots of people killed, often only fighting back against the mole men when there's no-one left to protect. Maciste also can't spot traps to save his life. I like that Maciste isn't so strong that nothing is an obstacle to him. I also found the occasional moments where he fells multiple targets at once, or with the same object, to be very amusing! Also, I have to admit, I do find it impressive that his muscles are able to remain consistently oiled up despite being a prisoner! 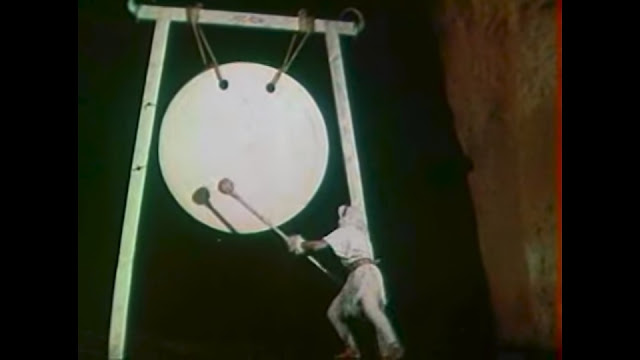 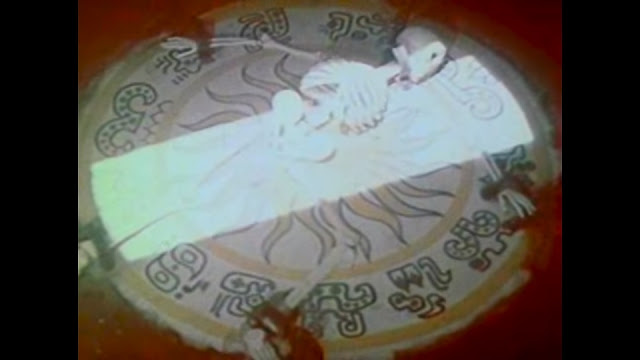 Bangor is a decent sidekick. Not much more charismatic than our main lead, but more likeable. He's gravely underused in the film's midsection though, mostly being chained up. There's an incredibly awkward moment early on when Bangor is rescued by Maciste, and he sticks his head under The guy's foot and pledges to be his slave forever more. Uhhhhh...

The villains plans are a bit confused. It's to have a mole-man mate with their secretly human queen, so that their offspring will have an immunity to the fatal effects of the sun's rays. Ok, nevermind that it'll take FAR too long for the effects of that plan to ever amount to anything, if ever, but why do the Mole Men even think it'll work? It might not work biologically, or maybe it won't because, oh, I don't know, the Gods who enforced the punishment in the first place will take issue with their plan?!

Also, the first time I saw this movie I was under the impression that kidnapping the baby Halis Moyaab is what caused the curse in the first place, so simply giving her back would've fixed the issue. I didn't hear a thing about that on rewatch though, so I'll give the movie credit in at least not being that stupid. 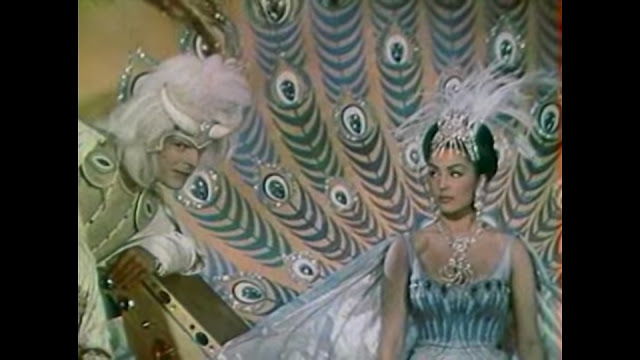 Halis Moyaab starts out as a decent villain, but that status is soon completely torpedoed as she's reduced her to an ineffectual and swooning damsel practically going "Oh, Maciste!". Her part in the end isn't really that involved, and what becomes of her is predictable, but satisfactory.

Possibly what pisses me off most about the whole last act is how 10 minutes before the end, when Maciste frees the slaves and they start overrunning the Mole Men, finally escaping as their antagonists flee, the moment is the ruined. What was previously a victorious scene is undercut by the exits being barred, and half the freed slaves being slaughtered by arrowfire. Way to totally make your triumphant climax become needlessy depressing! The climax as a whole is pretty unsatisfying, but the ending is amusingly cheesy. 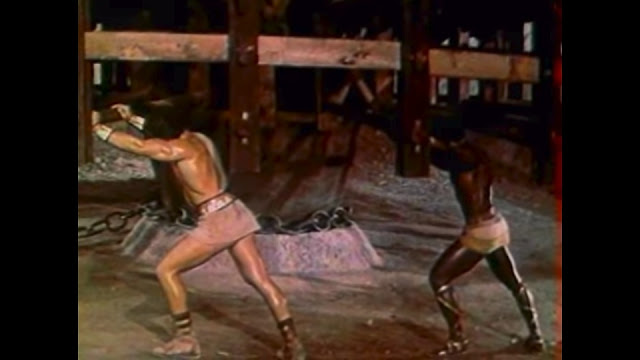 While we're on the subject of cheesiness, yeah, that's a factor here with the general feel of the movie, the costumes, the music, the bad dubbing, and some of the dialogue, such as "A man can only resist so much when he is a man". The moment when a mole man is executed by being exposed to the sunlight is pretty hilarious too! Other than those fleeting bits of entertainment, there's not enough to make Mole Men Against the Son of Hercules all that watchable though, I'm afraid.

The acting here is pretty mediocre, as is the dub performances. The look of Mark Forest and Paul Wynter is a sight to behold, at least! Their often-oiled pecs are so huge I'm surprised they aren't really the sons of Hercules! Gianni Garko is apparently in this movie too, but hell if I recognized him under the heavy costuming and make-up. 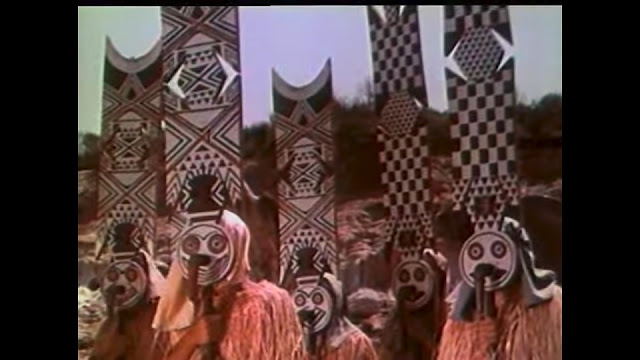 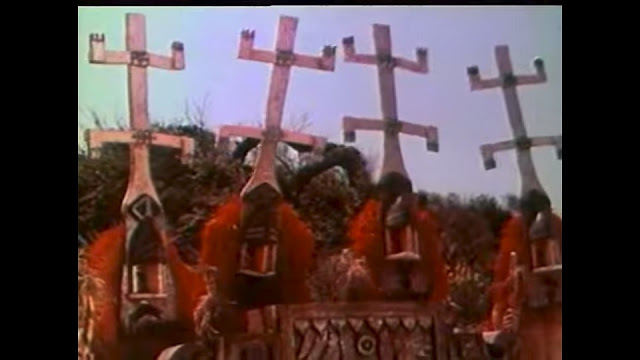 The set design and some of the props here are quite good, and sometimes creative, if a bit silly (or abstract in a Dom Patrol-esque way). One major special effects failure is how in any scenes when the mole people are outdoors, it's clearly broad daylight, yet they talk as if it's still night. 'We'd better get back underground before the sun's rays touch us!' says a concerned mole man while the sun's splendifferous rays are shining upon him.

There are some animals on display here, including some horses that were either greatly inconvenienced, or well-trained and adept at pretending to fall over. There's also a pack of adorable lions! The gorilla in the one fight scene though is of course a guy in a crummy suit. 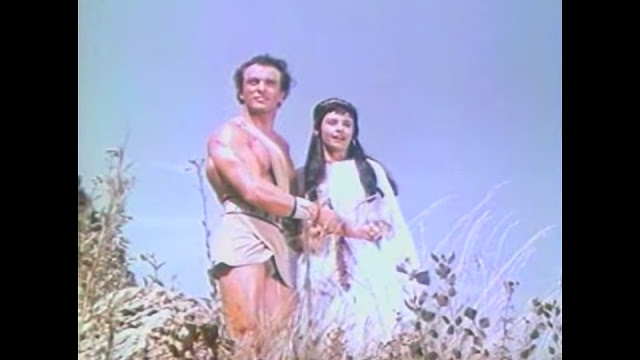 The music is generally ok, and the theme song (recycled in a lot of the Maciste movies, among other sword and sandal heroes, like Argolese for example) positively reeks of machismo with its over-the-top lyrics!

Mole Men Against the Son of Hercules isn't all that great a film. It seems as if medicority is the standard for a lot of these old Italian sword-and-sandal flicks. I sure hope not! I want to see some of these that are genuinely good! Well, Zeus knows there are plenty more to choose from!...
Posted by Chris Hewson at 8:56 AM