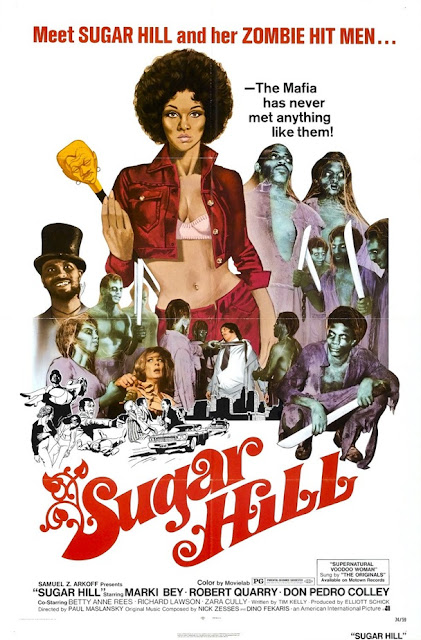 During the heyday of Blaxploitation cinema, there were quite a few horror titles coming out, some making a name for themselves. Quite a few of these got lazy following Blacula's example, inserting 'Black' into all their titles even though the reason that worked for Blacula is that 'black' rhymes with 'Drac'. I'll probably never stop harping on this, but Dr. Black and Mr. Hyde is one of the laziest titles I've ever heard! Quite a different story for Sugar Hill (aka The Zombies of Sugar Hill)...

Diana 'Sugar' Hill lives with her loving nightclub owner boyfriend Langston, looking forward to getting married. Things take a turn for the worse though when a criminal who wants the nightclub for himself sends his goons to beat Langston to death. Distraught, Sugar seeks out Voodoo priestess Mama Maitresse, who helps her get in contact with Baron Samedi, Lord of the Dead. Now in control of an army of the undead, Sugar is determined to wreak a terrible revenge upon those who killed her love... 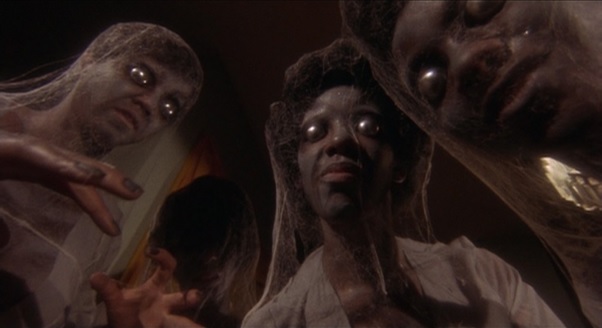 Sugar Hill is a great example of African-American horror! The plot moves along at a nice pace, never feeling boring as it tells this relatively simple story of Woman wants revenge, Woman takes revenge, The End. The minutes breeze by, and there are plenty of creative death scenes to keep one's interest, and creep one out. A couple are largely offscreen, but in an effective way, and the ritualistic stabbing is filled with tension! Perhaps less appealing to others is that the story never really diverges from its simple structure, nor is there any tension for the title character, who stays on top for the whole movie with no struggles against her opponents.

Unlike some Blaxploitation flicks, Sugar Hill isn't so much dated as it is a time capsule, which is very much in its favour. Also, I dig the variety of different black people/African Americans this movie shows. Some good, some bad, civilians, business owners, gangsters, cops, voodoo priests/demigods, etc.

The dialogue is sometimes cheesy, and there are great lines here and there, like Sugar's fabulous put down of "Talking to you means I look nowhere but down".

The effects here are pretty good! There's little violence on display, but what there is is decent. As for the zombies, they look neat, with their pallid skin, chrome eyes, and sometimes deranged grins. Unfortunately, they don't directly contribute to about half of the death scenes. Two of the gangsters get offed by Sugar and her voodoo dolls, while another is fed to hungry pigs. 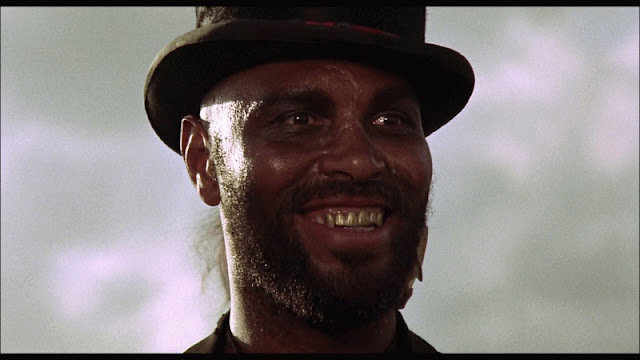 Onto the acting. Marki Bey is really good here! She starts off as a regular lovestruck person, and as the movie goes on, becomes a harder-edged avenging angel. One look at her and you know that this is not a woman to mess with. I particularly liked when the vengeful Sugar is pretending to be gracious with the villains she manipulates.

Don Pedro Colley is by far the best thing about Sugar Hill! He plays Baron Samedi with a wonderfully creepy charm, and is so amusing to watch! Thankfully his character plays quite a proactive role in events too, and isn't just offscreen for much of the movie. Zara Cully delivers a neat performance as Mama Maitresse, too. The rest of the acting is ok, though Robert Quarry doesn't make for a very good villain, and none of the other bad guys are at all memorable (except in the spooky conclusion).

Sugar Hill is a lot of fun, and it's the best Blaxploitation horror I've seen so far! If you're looking for something to watch that's positively dynamite funky, then go for this!...
Posted by Chris Hewson at 12:17 AM