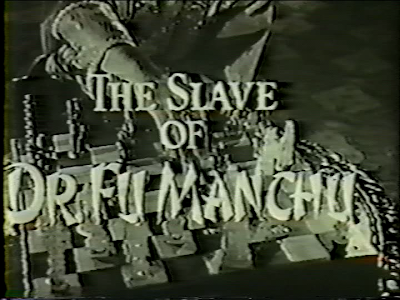 This review of The Adventures of Fu Manchu is brought to you by...Hewson Cigarettes! Cigarettes that aid you in your day to day life, and always make you healthier...

Yeah, this episode of Adventures has part of a sponsors message that was never cut out from the DVD-R! That is to say, only the words, 'sponsors message' are shown, but it's shown three times in the episode. Though, if memory serves me correctly, a later episode of Adventures actually does still have an ad in! It's not for Folgers Coffee though ("That's pretty harsh!"-"Yeah, well so's your coffee!"). 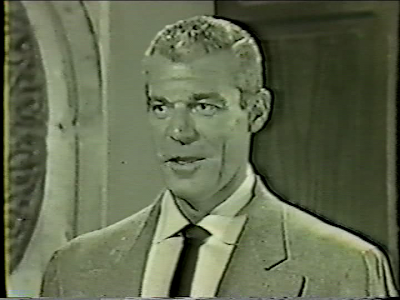 The episode starts off in Washington D.C., in one of Fu Manchu's many, many lairs. Fu calls in Arden, a henchman from Hong Kong who has just killed 'a whole plane-load' of Fu Manchu's enemies, and is ready for his second mission-destroy the reputation of Nayland Smith (or, Fu, you could just KILL him!)... 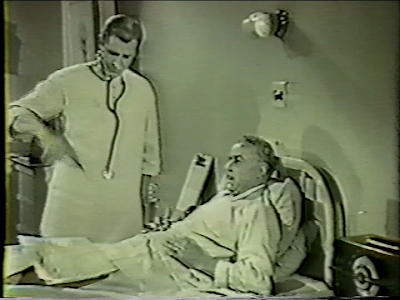 Nayland Smith is in hospital with Malaria when he hears a news report about his alleged cowardice on a plane (the one mentioned before), which resulted in the deaths of the nine passengers. As Smith is complaining about the charges (and being paranoid about Fu Manchu again, all while acting very active for someone who has malaria!), Richard Kingsley of the British Embassy arrives. Kingsley believes that Smith is innocent, and has launched a full investigation of the plane incident. Then Smith asks to be part of the investigation down in Hong Kong...even though he has malaria! I'm no expert on malaria, but shouldn't you be in extreme pain right now, Smith?! I'm surprised you can even talk properly! Stranger still, Kingsley accepts Smith's request, which would be weird enough if Smith was only sick, but he's the SUSPECT in this case!  Dr. Petrie won't allow Smith to leave because of his condition, then he decides that he and Betty will accompany Smith to HK. 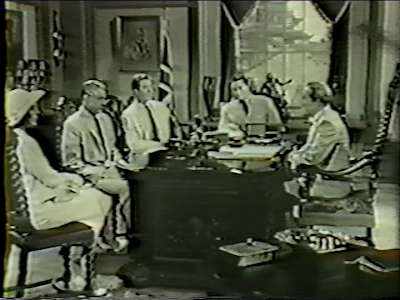 Smith and co. go to a small inquest, where a pilot named Johnson (Mark Dana) is testifying against Smith. Johnson claims that Smith approached him and used his government credentials to get a place on Johnson's charter plane, even though the plane was full-as a result, Johnson had to leave behind his co-pilot. The plane was soon headed for a typhoon, and Johnson says that he wanted to turn back, but Smith held him at gunpoint and demanded that he keep going. When they got by the typhoon, Johnson wanted to make a landing, but Smith made him fly up above the storm, and he put the only two oxygen masks on Johnson and himself. When the plane landed at HK, all passengers were dead. 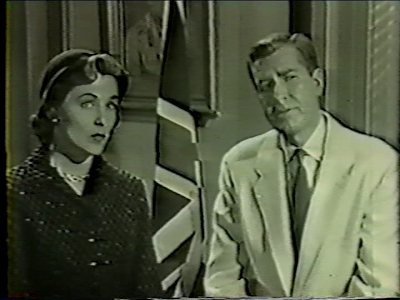 Smith denies the charges, claiming he was unconscious with Malaria when the plane was in the air. The inquest is adjourned for the day, and after Johnson leaves, Petrie says that Johnson looked like a desperate junkie. 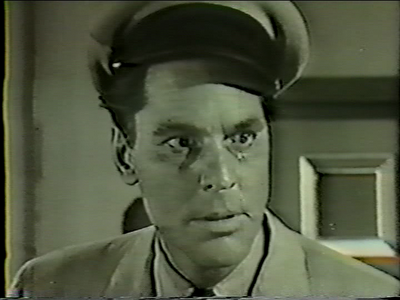 The episode cuts to Fu Manchu's secondary lair (it's a different set than the usual one), where Johnson yells at Fu Manchu for getting him hooked on drugs, which Johnson started using to dull the pain from a war wound. Johnson, disgusted with what he's been doing, refuses to help Fu Manchu anymore, and he storms off. Fu stops Arden from going after Johnson and killing him, as he's got a better way of doing things. Seven months prior, Fu had one of his henchmen steal Nayland Smith's gun, and it will incriminate Smith as Johnson's killer if he is shot with it. Man, Fu, do you plan ahead or what!

A little while later, Arden guns Johnson down. The plan is bungled though, as not only did Johnson survive, but Nayland Smith was in a hotel room for the whole day, knocked out by sleeping pills and watched over by Betty. Fu, angry, demands that Arden kidnap the witness to Smith's whereabouts-Betty Leonard... 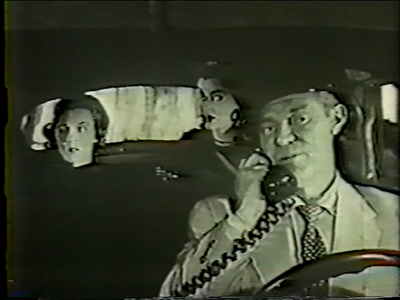 Will Fu Manchu's plan to incriminate Nayland Smith succeed?
Will Betty die?
If so, Will Nayland Smith and Dr. Petrie be able to find someone else to make their coffee?

The Slave of Fu Manchu is a good episode of Adventures, although its plot desn't have a lot of meat on its bones. It does handle character developement for Captain Johnson quite well though, for a twenty-five minute long episode. 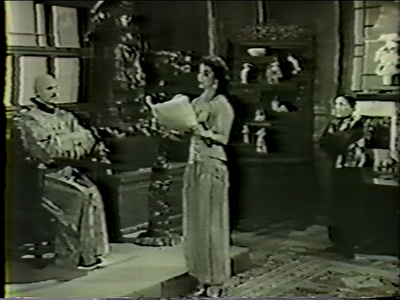 One big problem the episode has is a HUGE lack of Fu Manchu! As for side characters, Karamenah and Kolb both get to do a bit, which is good, and Betty has quite a bit of screentime, and she is integral to the plot near the end. The acting is all good, as usual, and Glen Gordon is awful, yet entertaining, as usual.

The episode has one fun moment in particular near its climax. An attempt is made on Johnson's life by Kolb with a sniper rifle! It is awesome! 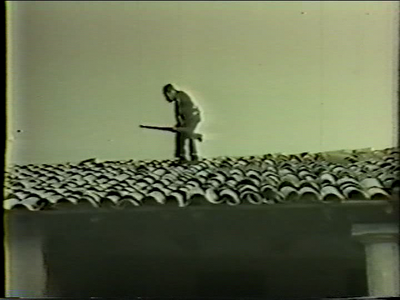 Another funny thing is that, at the end of the episode, Johnson names names, and pretty much destroys Fu Manchu's entire drug organization. The Adventures-Smashing Fu Manchu's drug empire in twenty-five minutes or less!

In closing, The Slave of Fu Manchu, like all ten episodes that preceded it, is a fun addition to the series...
Posted by Chris Hewson at 12:55 AM