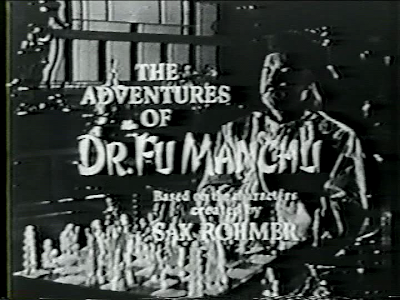 So, I've reviewed all thirteen episodes of The Adventures of Fu Manchu. Now to go over my final thoughts on the series as a whole.

The episodes are almost always a lot of fun! They have Fu Manchu trying to take over the world, with a new scheme in each episode. And the twenty-five minute running time only affects the plots sometimes, which is a huge plus!

As for Fu Manchu himself, I've mentioned many times that Glen Gordon is terrible, yet entertaining as the 'Devil Doctor'. His attempt at a Chinese accent is laughable, and full of pauses and 'ah''s, plus, he can't do his silly accent without smiling-not because it's entertaining to him, but because it's the only way to do keep the accent going, I think. He smiles constantly during moments where he shouldn't be smiling!

Lester Matthews and Clark Howat are good as Nayland Smith and Dr. Petrie, although they sometimes have to say really stupid things, thanks to the sometimes nonsensical plots! They've got the characters down ok, although poor Nayland Smith! In the books, he was a young, spry super fly! He was in his thirty's, yet in every single film, or tv show he's been in, he's always been portrayed as a guy in his middle ages! And of course, Adventures is no exception.

One of my favourite things about Adventures was definitely the supporting characters! Laurette Luez and Joh George as Karamenah and Kolb are cool main henchmen for Fu Manchu, but they tend to get underused sometimes, and they are rarely given dialogue. Whenever Laurette Luez talks, she does sound a bit stilted at times, but I think that's more due to her attempting something along the lines of a Chinese accent, rather than bad acting.

As for Carla Balenda as Betty Leonard, she's cool! She's a good actress, and Betty's usually with the guys in their efforts to stop Fu Manchu-she goes with them to other countries, she acts as a getaway driver, she helps them salvage an old ship etc.. She's a well-written female character-She doesn't just sit around and make coffee for the men (err, well, most of the time!), yet she isn't ridiculously over-the-top macho to try and show how 'not feminine' she is. She's just a real person (figuratively, anyway, what with her being fictional). Betty may not get any character development, but she was still a likable character.

I highly recommend The Adventures of Fu Manchu to fans of the criminal mastermind, as well as to random genre fans. It's so worth a watch!...
Posted by Chris Hewson at 7:30 AM