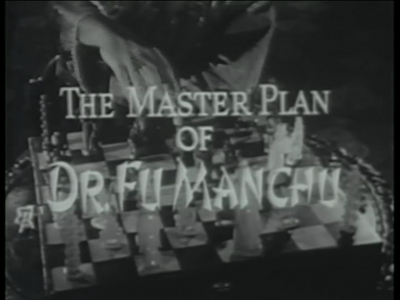 The Adventures of Fu Manchu has always been realistic(ish), and never absurdly goofy or ridiculous. Well that track record can be thrown right out the window, because this episode is about Fu teaming up with Hitler! 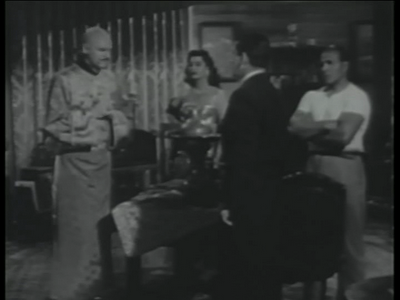 The Master Plan of Fu Manchu opens wth the 'Devil Doctor' watching stock footage of Nazi Germany. He talks nefariously to Karamenah and Kolb about 'a great periods in history-perhaps the greatest!'. Karamenah mourns the fact that Hitler's master plan for world domination died with him and 'was lost to the world'-(um, no it didn't, genocide wasn't original to the 1940's, lady!). Fu cryptically says that the plan did not die, and he will be ready to resurrect it. He then instructs Karamenah to kidnap Dr. Henderson, a famed plastic surgeon. 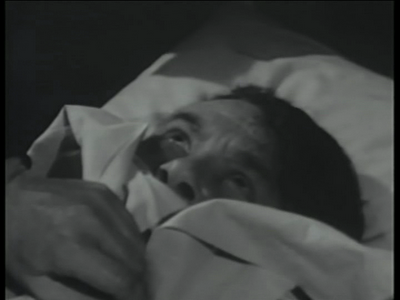 Karamenah and some dacoit henchmen kidnap Henderson and bring him to Fu Manchu, who wants Henderson to do an operation on a certain friend of his...

The episode cuts to Dr. Petrie and Betty. Petrie narrates about how Henderson, his friend, had gone missing, and he and Betty started searching for clues. They find one, and Petrie goes alone (dumbass! What about backup?!) to the address they found via pencil impression. He arrives at the address and buzzes the doorbell. Opening the door is Kolb, who Petrie DOES NOT RECOGNIZE! Kolb lets Petrie in, and he unwitingly walks in on Fu Manchu and his compatriots-Karamenah and a guy named Coco, as well as Henderson, who's finished his operation. Before Henderson can reveal who the patient is to Petrie, he is silenced, and Petrie is taken to another room. Petrie pleads with Fu to not kill Henderson, as he may still be needed if infection sets in on 'the patient's' face-job. Fu declines, claiming that Petrie can serve that purpose. In the other room, Henderson is killed by Coco...Thanks to stupidity from Henderson, who never fights back! 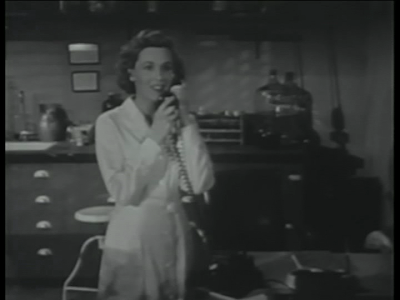 Next comes the point in this episode where anyone watching will yell 'DR. PETRIE, YOU MORON!'. Petrie says that his assistant knows where he is. Are you really so stupid to reveal that to your enemy, Petrie? That could have been a gambit up your sleeve, but now, you have to call Betty and say that the address was a dead-end. You're lucky Betty didn't get a bullet in the face!

Petrie is forced to call Betty and tell her that he found Henderson, who was fine, and the two of them will be gone for a few days on a secret mission for the government. Betty, as well as Nayland Smith buy it (would it be mean to call them stupid for that?), and everything is going fine for Fu until Kolb reports back from dispatching Henderson's body. The police showed up while he was dumping the body in a river, and have autopsied the body. 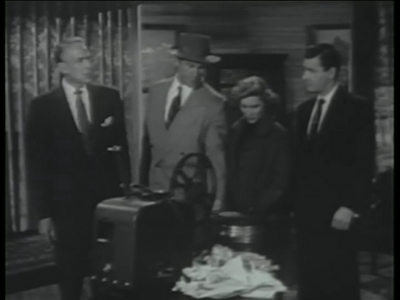 Betty reads a coroners report on Henderson and realizes that Petrie is in danger, so she calls Nayland Smith.
They, and a policeman, go to the address and find nothing but a copy of Mein Kampf, some Nazi propaganda footage, and equipment for plastic surgery. After finding out that Henderson was killed by the 'tarantula magna', a rare, extremely venomous species of spider (no, it doesn't exist in real life), Smith recognizes it as a common execution tool of Fu Manchu. Smith also deduces that the patient must be Hitler... 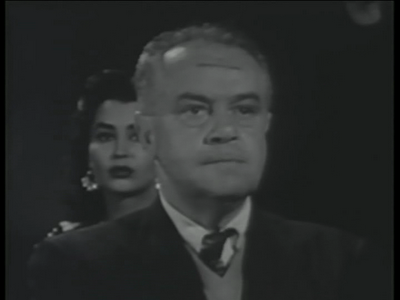 The episode switches to Dr. Petrie, who narrates that he was hauled onto a World War II submarine, helmed by a German crew, headed into the pacific ocean. Petrie unwraps 'the patient's' bandages, and instinctively senses that the man is evil. When the man goes into an 'I-will-rule-ze-vorld' speech, Petrie recognizes the voice, and knows who the patient is.

Over a week later, a 'field operator' in Singapore has spotted a submarine, and noticed 'one Eurasian female, one Eurasian dwarf and one Oriental male'. Nayland Smith arranges for an immediate flight to Singapore. Meanwhile, the submarine has been taken from Singapore to a South Pacific island, which has an underground base (please tell me it's in a volcano!). In his base, Hitler unveils his secret weapon to Fu-an atomic device that, if placed within a mile of a nuke, it will make the nuke explode. With their plan in hand, Hitler and Fu Manchu are ready to take over the world!...

With only a single submarine crew worth of soldiers. Um, guys, I don't think you quite thought this plan through! Will Fu Manchu and his sinister ally carve their murderous impression across the world?
Will Hitler's flimsy army be destroyed immediately?
Will Fu Manchu realize that Hitler hated Asians too?

The Master Plan of Fu Manchu is an entertaining episode, although it's plot has two crippling problems. One is Hitler's super-device, that can blow up nukes when it's placed near them. I suppose you think that sounds like a great plan-if several nuclear bomb stockpiles detonate all over America, it'd be screwed!...But that is not what the device does! It just blows the nukes up non-nuclearly. All the device will do is get rid of America's nukes. Fu Manchu claims that this will leave America defenseless to an attack...even though Nazi- Germany was defeated without the use of nukes! And a single submarine crew isn't gonna cut it against the ENTIRE AMERICAN ARMY!

The second problem is the usage of Hitler himself. As the episode is only twenty-five minutes long, Hitler first appears nearly five minutes in, only properly appears several minutes later, gloats about his evil plan for five minutes, then his base is attacked and he, and his forces, are destroyed. So, yeah, the episode is just a little bit abrupt!

The acting is all good (barring (the still entertaining) Glen Gordon, of course). The guy who plays Hitler is ok, but doesn't get to do much.

Speaking of characters who don't get to do much in this episode, the same can be said for Karamenah and Kolb, unfortunately. Betty doesn't get as much screentime as usual, but still quite a bit, which is good.


So, in closing, Fu Manchu and Hitler: Best Buds is a fun episode, with a strange thing at the end... 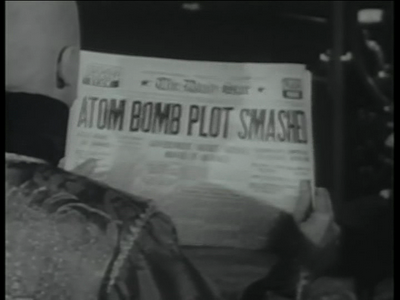 Why would the government reveal that? Haven't they ever heard of confidentiality?...
Posted by Chris Hewson at 5:30 AM