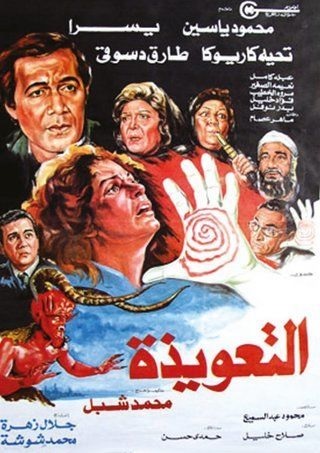 There are still three more horror films that Fangs (Egyptian Rocky Horror) director Mohammad Shebl made, and at first I didn't have any luck finding them, but then I had a realization. 'Oh yeah, Me, just search for them with Arabic text, not English', and would you believe it I found two of 'em instantly!

I originally considered not reviewing these films until I've learnt Arabic (not too far off), but as I was watching it, words were coming into my head, and I figured I can judge pretty much everything about the film as is, bar the dialogue itself. So, let's dig in to 1987s The Talisman!... 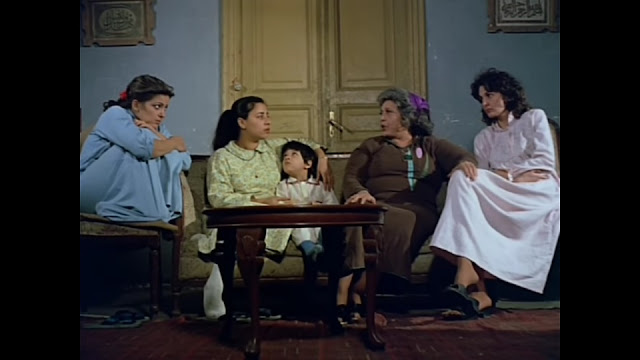 Family man Mahmoud lives happily enough in his apartment, but his villainous landlord is in league with the devil, and wishes to own the property all for himself, using his dark forces to torment the family into moving out. Can he control the malevolent power though, or will it consume him? And what will become of the family if this happens? Will they escape the evil that haunts them?...

The Talisman is a departure from Shebl's previous outing in that it's a more conventional and serious film rather than a comedy or musical. It actually manages to be quite effective! One of the spookier scenes is when the young boy's ball doesn't stop bouncing, and he ends up following it.

The movie is a bit talky, but perhaps that'd be less of a problem if I actually understood what they were saying. The villain's motivations seem incredibly petty, and we barely see him interacting with anyone, so it seems even more flimsy. Is he really only doing this because of real estate?! And would this come across as clumsy social commentary akin to Fangs' satire if I knew the language?

There's one super frustrating moment during the ritual the wife has organized, when Mahmoud comes home and is having none of it, breaking up the procession before its completion. Well don't go complaining to them for a refund once the devil comes to Earth, you dick! Oh well, I suppose I can't be too hard on him since he doesn't know he's in a horror movie, nor has he peeked ahead ala Spaceballs and seen the film's final 10 minutes, but surely he knows that something is up? Thankfully he does eventually come around, but geez, it takes a while!

Finally, the ending is a bit random. At one point, the mother walks into an elevator with her young son, and the supernatural haunting starts happening again. She starts yelling at the evil force, which apparently causes the villain to...turn into a lizard person? He is never seen or mentioned again. Then the devil in all his malevolence bursts out from hell like the Kool Aid Man and impales who I presume to be the villain's henchman on his horns. He is also never seen or heard from again. Following that, I guess we got a happy ending? It's a confusing one for sure, but awesomely spectacular, especially when compared to the rest of the movie, which was a basic haunting flick up until that point. 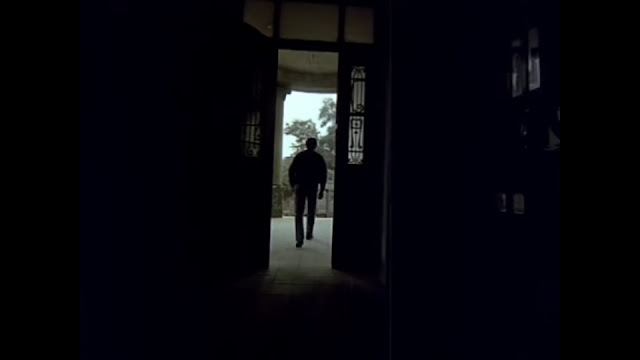 That's as good a segue as any other to dive into the effects. They're well executed, and the finale is really good! While the lizard man make-up/mask isn't that great, the skin tearing effect is neat and ghoulish. The devil is very well designed here, looking not too dissimilar from Tim Curry in that movie Legend. You have to wonder how much of the budget this make-up and prosthetics cost, because it's friggin' impressive as hell! Pun absolutely intended. Finally, the impalement that follows is also cool. I have to warn you though, there's an unpleasant scene involving a chicken sacrifice that may or may not be fake. Whatever the case, this is two for two now regarding the number of Mohhamed Shebl films, and number of dead chickens. The villain's henchman seemingly being in blackface is also weird!

There is one pretty hilarious goof I noticed at one point. The Evil Dead inspired POV shots are good, but in one, we see the shadow of the cameraman! Oops! Hehe.

The performances here is pretty good. Mahmoud Yassine is an ok lead. Nothing special, but he does his job ok. The actress who plays the mother is a trooper! She really puts her all into the movie, and is even willing to be [drenched] in real chicken blood for the role! That's what I call determination! Also of note is the presence of famed bellydancer Taheya Cariocca.

The Talisman has a fun soundtrack of licensed tracks like You Can Leave Your Hat On, Girls Just Wanna Have Fun, Living in America, plus it settles an age-old question: Do Egyptians enjoy Walk like an Egyptian by The Bangles? Yes. The answer is yes.

The Talisman is a mixed bag, but at the very least, it's a competently made horror film, the occasional technical oopsie aside...
Posted by Chris Hewson at 9:20 AM