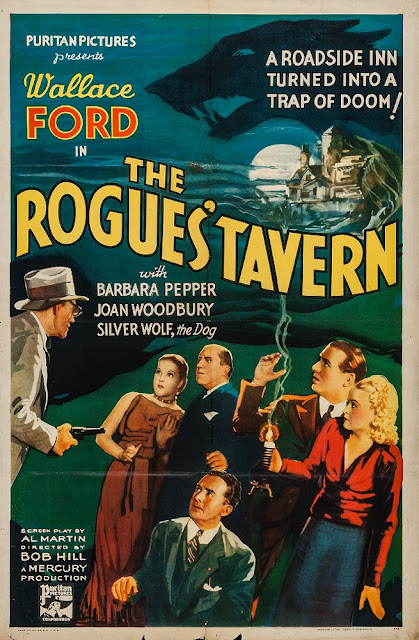 Newlyweds Jimmy and Marjorie, both detectives in one way or another, are trying to find the justice of the peace so they can get married. To this end they end up in a local tavern that's rife with activity for a change. Filled with six other guests, things quickly take an ill-fated turn when they start getting killed. At first it seems like an apparently vicious dog is to blame, but once his cute name is cleared, it becomes clear that the killer is all too human, and will strike again if he's not stopped first... 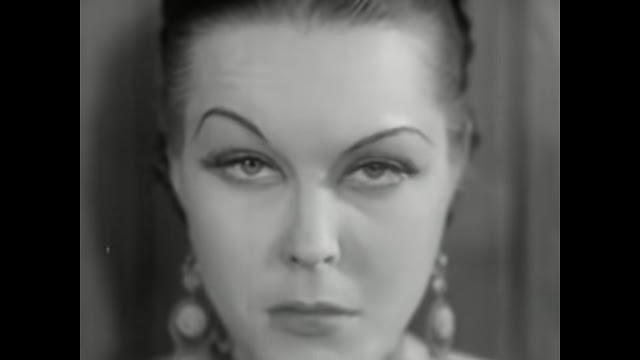 The Rogues Tavern is a decently fun movie, which starts off quickly and promisingly. Unfortunately, despite its positive qualities, it begins to be weighed down by a lot of little and big problems.

The plot to this film is pretty messy! It starts off with people being savagely killed by a psycho killer,  but as it goes on further, it seems like this story is ignored in favour of a different one about a disgruntled mad scientist trapping everyone inside the specially designed inn. Then this seems to be ignored! The movie keeps introducing new plot elements without explaining the old ones! 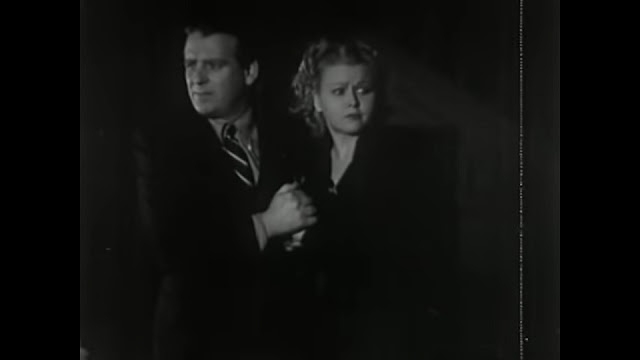 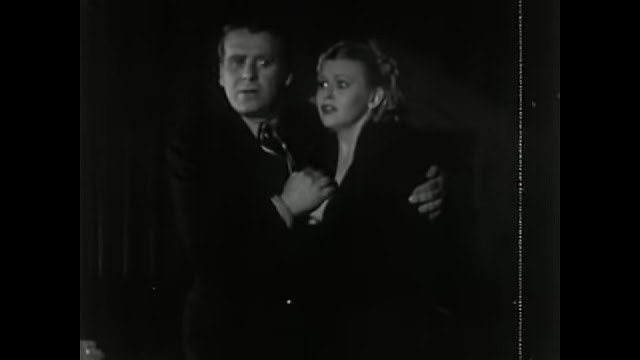 For a while the film is muddled, by things become a smidgen clearer by the climax,  and by the end it does make sense why the guy who's plotted this intricate revenge scheme would kill three of his six would-be victims an hour before making his grand evil speech of revenge! He's not the only villain around...

...Yeah, the plot's still confusing though.

The heroes are mostly unenjoyable. They're supposedly both detectives, but Marjorie's sleuthing side rarely comes up and she spends most of the movie trailing around like a dog, or being scared in the next room while Jimmy investigates. What's most frustrating is the way he treats her. He's a dickhead! It's like the writers intended their relationship to be a mutually snarky one (as if common in movies such as these), but forgot to write any pithy comebacks for her, so she seems like a doormat, and he seems one negative comment away from a divorce before they're even married! 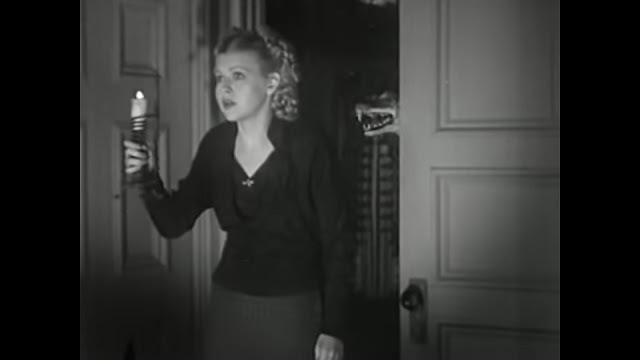 The other characters are an ok bunch, but we find out so little about their motives and personalities that it's hard to care or feel invested in them. The only remotely distinctive one is the psychic co-conspirator Gloria. She starts off interesting and mysterious, but gradually becomes a nuisance. She says "I knew this would happen!" so often and in such a way that makes it seem like she didn't have a clue. She also says 'We're doomed!' as often as Frazer from Dad's Army.

The lack of music really hinders the movie after a while. The fact that there's no atmospheric scoring or use of shadows (in fact, everything's almost always brightly lit) make for a not particularly spooky viewing experience. Another side effect of the lack of music is that whenever characters stop talking, everything goes quiet! If not for the hum of the film, you could be forgiven for thinking you accidentally hit the mute button by mistake! 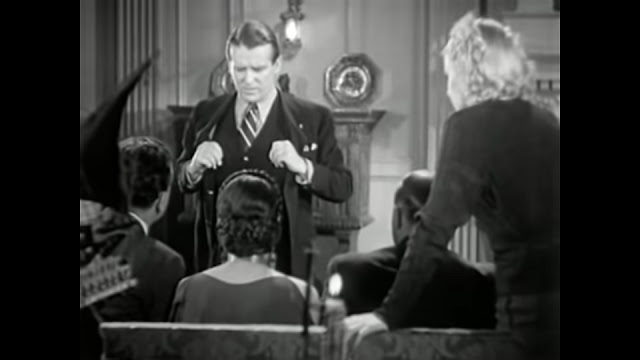 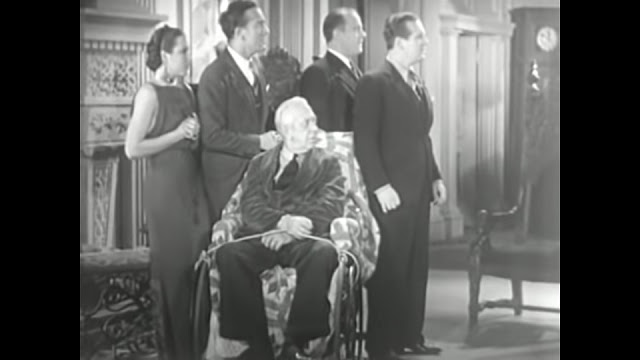 Since the story is utterly unclear at all times, it's up to the actors alone to sell this picture and keep the audience interested. They do an alright job. Whether Wallace Ford is entertaining or annoying to you depends on how you feel about his 'lovable asshole' type of characters, which can come across as just plain assholes!

Vincent Dennis is possibly annoying or funny as the local scaredy-cat Bert, and he disappears after the midway point. Earl Dwire has fun for about a minute as the possibly villainous mad scientist Morgan, looking a bit like a fish, but besides a bit of lurking beforehand, his big moment is fleeting and he's promptly ignored for the rest of the movie. Joan Woodnury is neat and stylish at the start, but eventually began to annoy me with her incessant whining. 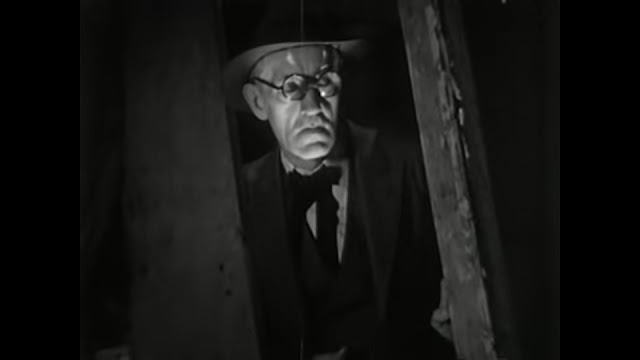 One member of the cast who really impressed me at first was Clara Kimball Young. She's wholly unremarkable for the first 45 minutes, but her expressions when her husband is covering for the murderer are really good! But then she squanders all of that with a bizarrely terrible turn at the end that sucks all seriousness from the production.

The location here is alright, but never really felt that lively. Or perhaps it was too lively and that's the problem! Always well lit, always bustling, and never particularly interesting, even when it becomes a deathtrap. 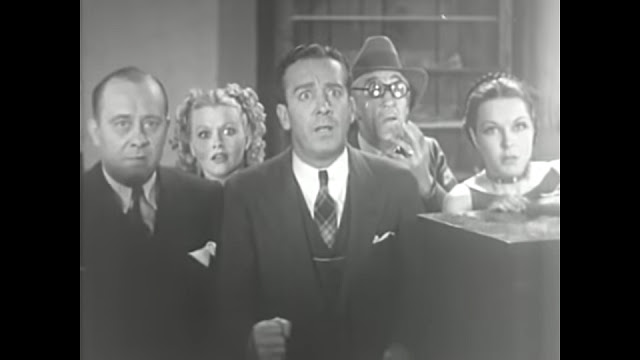 Overall, The Rogues Tavern isn't entirely worth ignoring, because it's got a fair bit to like about it. It really is a flawed movie though, and never comfortably found its footing. Give it a watch if you're interested. Now, to quote the movie,  Pleasant nightmares!...
Posted by Chris Hewson at 8:31 AM