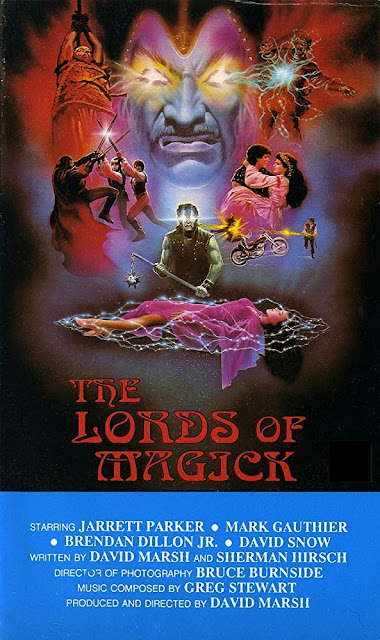 This post is dedicated to my old blogging pal Jesse Gable of Mr. Gable's Reality

Back in the middle ages, Merlinite wizards Ulric and Michael Redglen roam the land. Michael is more interested in keeping his head down and learning new magic, while his carousing brother does what pleases him regardless of the consequences. After the two are captured by the king's guard and sentenced to death for their use of necromancy, despite their benevolent aims, they appeal for their lives in exchange for a favour. He agrees, and commands the Redglen brothers to find the malevolent sorcerer Salatin and rescue the kidnapped princess Luna.

Michael and Ulric track down Salatin, but he taunts them with a riddle before vanishing. A divining session with their master reveals that their enemy has retreated to the future, and so they follow. They have trouble navigating the strange new world of Los Angeles, but soon find a friend in amateur spellcaster Thomas, who's willing to help the duo. The quest is truly on, but can Ulrich stay focused on his goals and not give in to the lure of Salatin? And can Michael and his new friend stop the evil wizard before he can become the one and only Lord of Magick?... 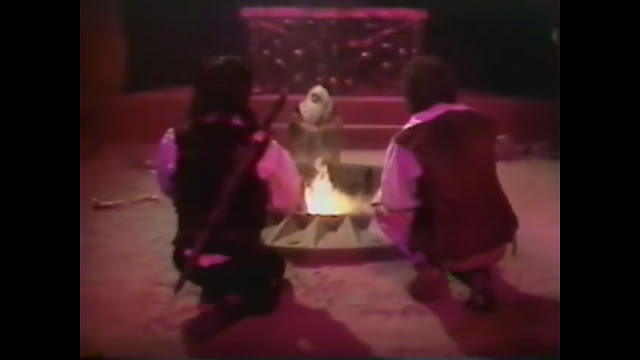 The Lords of Magick is a super cheesy fantasy film that brings new meaning to the word! While it may not be as famous as others of its kind, this is well worth remembering.

The story starts out pretty fun, with a neat classical setting. Unfortunately this soon goes the way of seemingly all high-concept fantasy films on a budget-A fish-out-of-water story on Earth. They've all done this. Beastmaster 2, Masters of the Universe, Thor, and more. I think it's in a way more excusable when it's a comedy, yet also less excusable. The typical 'confused by common modern day objects and customs' trope wouldn't be at home in a serious high fantasy, so a comedic film would be a good fit, however, do you know how many proper fantasy-comedy movies we get? Not a lot!

This qualm aside though, the movie does soon feel at home with its new setting, aside from a moody but otherwise lacking in oomph setting for the final battle-The back room of an electronics storehouse. 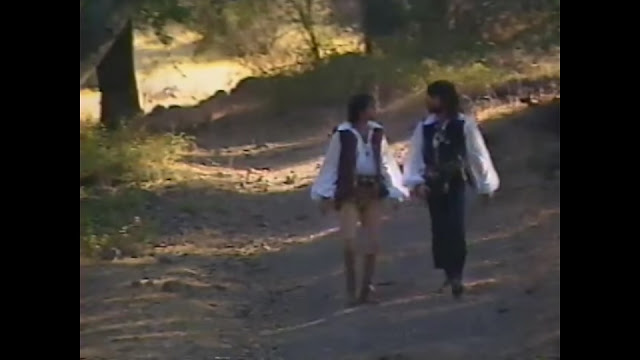 The plot isn't the most complex, but it's got some, good twists and turns, some more unexpected than others! There's also its fair share of odd moments, including one scene where the film briefly turns into The Warriors when the brothers accidentally wander into the turf of a garish street gang, who believe them to be a rival gang (a not unfounded guess given these two have swords).

The characters are one of the high points of this film. The two leads get across a good mix of being an everyman who still have a lot to learn, while still being believable opponents in the battle against the seemingly all-powerful Salatin. You never doubt that with a bit of extra training, these two could do the job. As for their personalities, Michael is a softly spoken nice dude who never fails to be pure. Ulric, meanwhile, is a player. A real hound-dog, he's always on the prowl for wine and women, beer and booty. Ulrich undergoes an interesting character change about two thirds in, and it's a surprise to see, but also makes perfect sense. It fits with everything that's come before, and all his seemingly innocuous bad behaviour is seen in a more serious light. 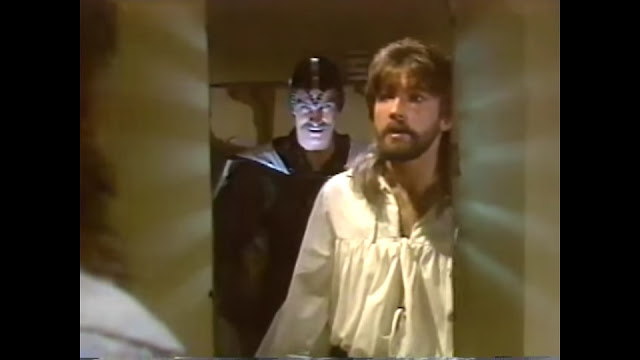 Magical protege and wannabe wizard Thomas is likeable and endearing, while his girlfriend Ellen isn't too skeptical and comes in handy from time to time. The princess is nice enough, but she doesn't appear much, and her love for Michael comes a little out of left field, though it is cute.

Among other things, Lords of Magick is also a comedy. While not all the jokes land, it does reasonably well, with some really funny moments, like the inquisition where the witness boasts about the level of torture he withstood, getting progressively more extreme until he literally says "And then they killed" me (and we realise just why the brothers are actually on trial), or when the brothers are in Salatin's lair to challenge him, and Michael tries to get the absentee villain's attention by peeing on his altar, immediately summoning the now extremely pissed off dark lord.

Moving on to the humorous elements that didn't work as well, there are some out-of-place comedy scenes right before and after a major dramatic moment. I'm also not sure how to feel about the ending. Given the brothers' proclivity to instantly turn to necromancy  perhaps the message of the ending could've been a good coda to that, with Michael realising that perhaps there is peace in death and it should be left alone. Instead he not only totally goes through with it, perhaps cheapening an earlier sacrifice, but we're also given a joke, which is admittedly funny, and closes the film out with a laugh, but could run the risk of spoiling the moment. 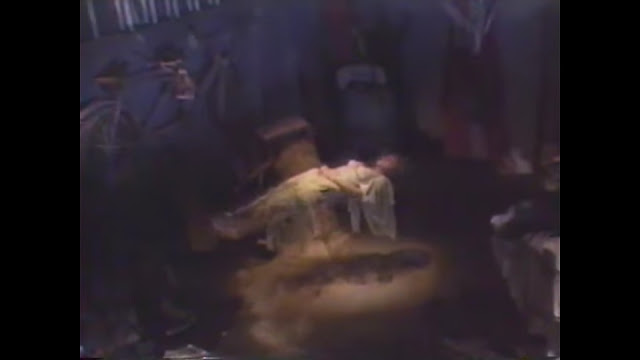 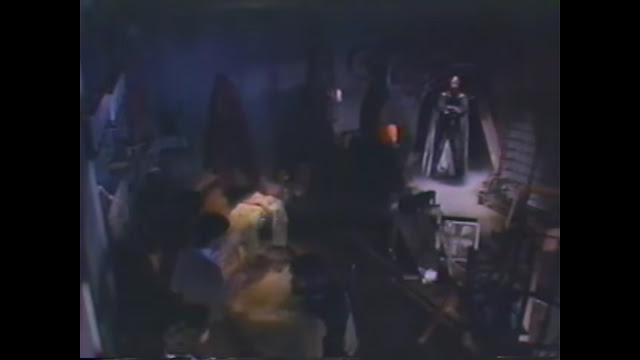 There's a reason this movie has a reputation as so bad it's good, and that's partly due to the often hilarious effects. The movie as a whole looks cheap, and we can freely presume the budget was comparable with a generous dinner at a Chinese restaurant.

One of the biggest budget-related hurdles is the fact that the movie's shot on video, but you get past this pretty quickly, which is a relief. Though the film comes dangerously close at times to looking like a home movie when we're shifted to the modern day.

As far as cheesy 80s effects can go, the stuff on display here is on par with the likes of Deathstalker. The visual touches are integrated well with the action, and the choreography is quite good! The effects are particularly impressive when portraying invisible forces, like a nightgown unfurling, a sword flying, or when a book is torn to shreds out of nowhere and set aflame mid flight. Lastly, there's the make-up for the zombies that intermittently show up...Yes, you read that right. Whether or not this production team were originally set to make a zombie film or whether these were leftover props I don't know, but they're not that bad, aside from an embarrassing devil mask. 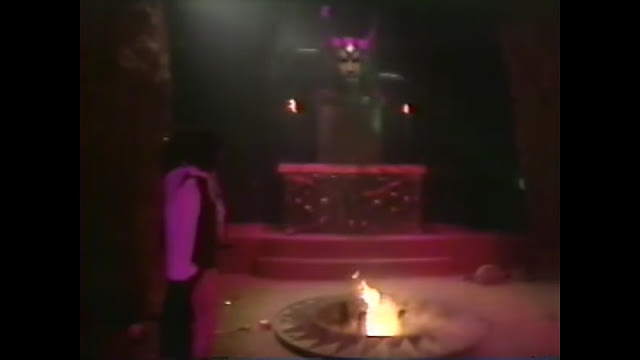 My final note on the effects work in this film is that there is a lot of it, especially in the final battle! It's on par with the climax of 1963's The Raven in terms of how much we see. While not all of them convince, and some are downright awful, this is effort I can get behind, especially when all too often you see magic in films reduced to a few blue sparks, maybe teleportation, and that's it.

The direction by David Marsh is standard, with a few decently staged moments. The final battle is a little chaotic, but not too bad. In one of the final scenes of the movie is a pretty neat transition effect! It doesn't look entirely convincing, but it's cool all the same. It actually makes you wonder why there weren't other creative shots throughout the film, rather than only one, 2 minutes before the end.

While it may border on sounding like a video game at times, the music here is pretty good. 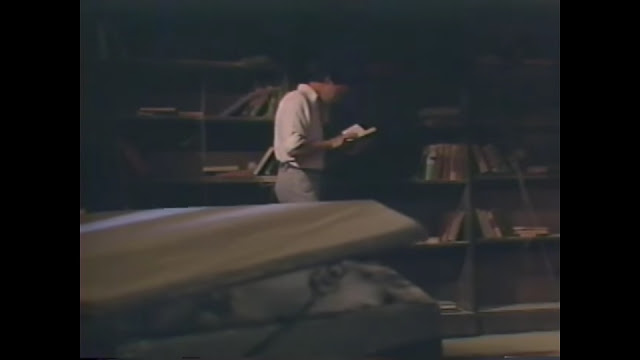 Despite anyone's inability to keep (or even attempt) a British accent, the acting in Lords of Magick is quite good. Jarrett Parker (Michael) and Mark Gauthier (Ulric) can get over-the-top at times (especially when chanting spells or displaying [broad] emotion), but on the whole they do decently well, especially with more subtle moments. Gauthier does really well with his character shift, making you believe what you see. I also felt Dolores Nascar did a very good job as Thomas's Gypsy friend. She's silly at first, then the way she shows fear really helps make Salatin seem intimidating. The only major weak link in the cast is Salatin himself, as played by Brendan Dillon Jr.. He's clearly having fun, but seems to get carried away, while also not being as good of an actor as the others, and the result is an actor who's chewing the scenery so much that you can see how wide he keeps his mouth open! 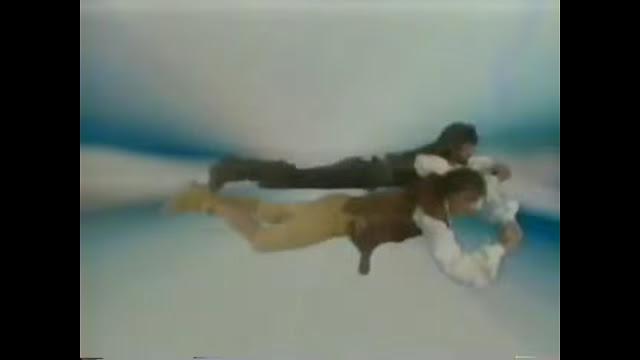 Lords of Magick has a lot going against it at first, and your reaction to it might vary depending on your tastes, but if you're a fan of goofy 80s fantasy, then look no further! This is a guaranteed fun time, and that's regardless of whether you find it genuinely good or not!...
Posted by Chris Hewson at 9:40 PM