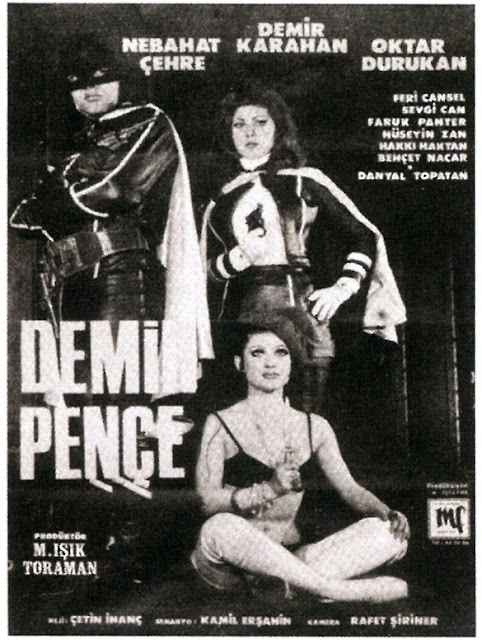 Turkish pulp cinema was a booming industry during the 60s. While it couldn't hope to compete with Hollywood's output, they tried their best with what they had, and provided much entertainment to the locals. Now, 50 odd years later, these films have found a second life among foreigners, much to the amusement and embarrassment of Turks, knowing full well these may be the only Turkish films these people see... 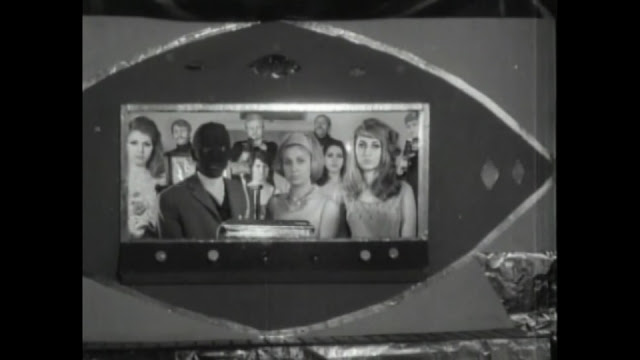 Arch-criminal Fantomas has returned to Istanbul with a vengeance! He is determined to retrieve some stolen microfilm, but standing in his way is the hero Demir Pençe. Together with his sidekicks Mine and Uncle, plus a vengeful cop, they fight valiantly against the evil Fantomas, in the name of their beloved country... 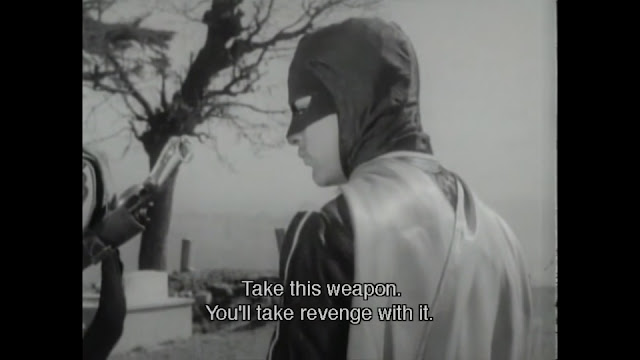 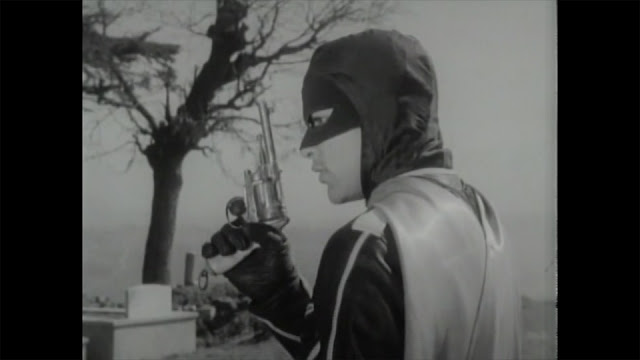 With a title translating to Iron Claw Pirate Man, Demir Pençe Korsan Adam promises to be a silly time, and it certainly lives up to that! It's part of the Turkish superhero scene, where masks are optional, human life is cheap, and the men get kidnapped just as much as the women.
The plot here is fairly basic stuff. A supervillain is after a macguffin, and the heroes try and stop him. In any other kind of movie it's be a pretty thin excuse for a story, but here it's exactly what you expect. A few punch-ups, cheesy dialogue, superfluous stripteases, and more. The film has a slight patriotic streak too, but nothing too cheesy, barring the amusing ending. 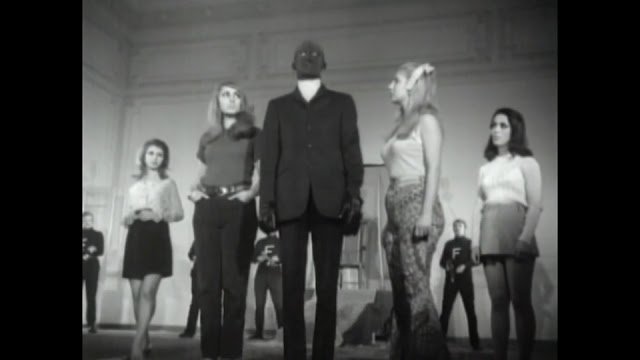 There are a few twists and turns. Nothing major, but enough to keep things varied, even though you usually know what'll happen. Naturally Fantomas always gets away during his encounters with the heroes, but it doesn't happen too much, and never feels frustrating. It's good in a way, because it means the film's not over yet. 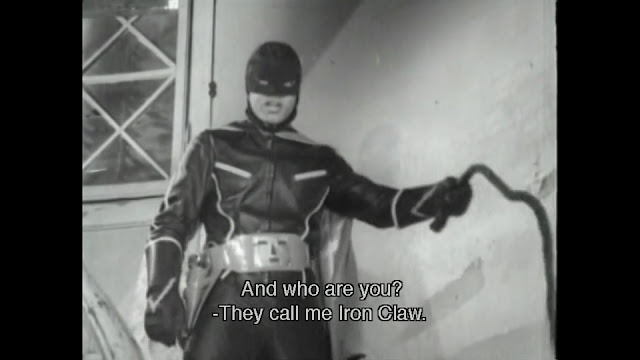 Despite being a z-grade pulp film, Korsan Adam actually looks quite well-made! Not to say Çetin Inanç was always a bottom-of-the-barrel filmmaker, but when your CV includes such 'gems' as Turkish Star Wars, multiple Turkish Rambo's, and the odd Kilink film, that's not exactly an 'inspiring' bunch. Korsan Adam however not only has plenty of imagination, but also enough money or DIY sklls to back it up. This much is apparent from the very first scene with Fantomas, and his fancy viewscreen monitor. 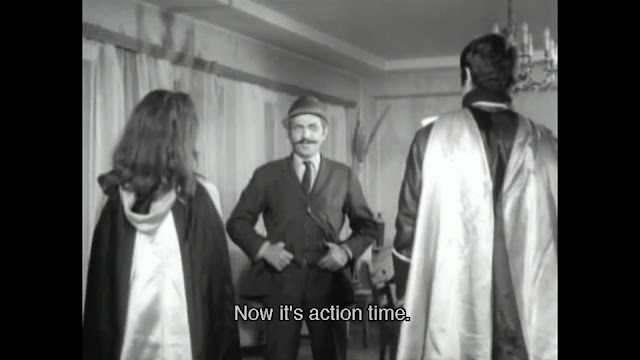 The heroes are a rough, tough duo. Demir Pençe and his sidekick Mine go in all guns blazing, possessing a 'Let's kill 'em all and let God sort them out' attitude towards human life. Mine proves herself just as strong and competent as the male hero, and is never a damsel. Demir meanwhile has no qualms with seducing the ladies for information, and going to bed with them! One wonders if Mine is aware of all this, and if she has a gun trained on him making sure he doesn't actually go all the way.
Uncle meanwhile is the comic relief. An older guy who tags along, he's not much help in a fight, but he does manage to help out in a few good ways! Then there's Yıldırım, the brother of a fallen cop who previously worked with Demir Pençe. At first he seems like he might be a little shifty, perhaps even Fantomas in disguise! But he soon proves himself to be a staunch ally. 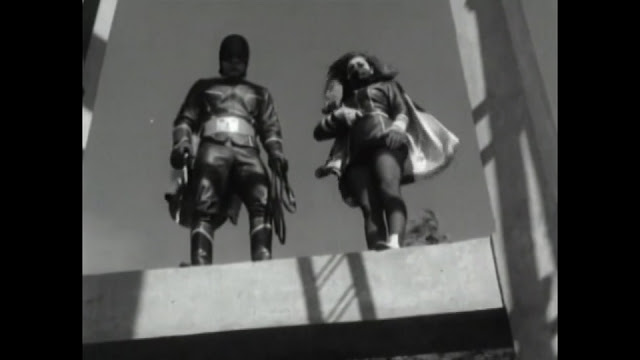 Where the heroes got on my nerves was when they kidnap henchwoman Gülgün and convince her to spill the beans. She's terrified Fantomas will kill her if she does so, but Demir insists she'll be safe and protected...Then 5 minutes later she's found in the same spot unguarded, by Fantomas and his gang, who kill her. Whoops! Also, for a guy who's impossible to find, Fantomas would've come right to the heroes if they had just waited in the shadows!
The heroes have some neat costumes, and wear them quite a bit, though the masks come and go. No cares about using their identities to protect their loved ones. After all, the friends and family of superheroes get kidnapped all the time anyway, so why hide it? These Turks are smart! 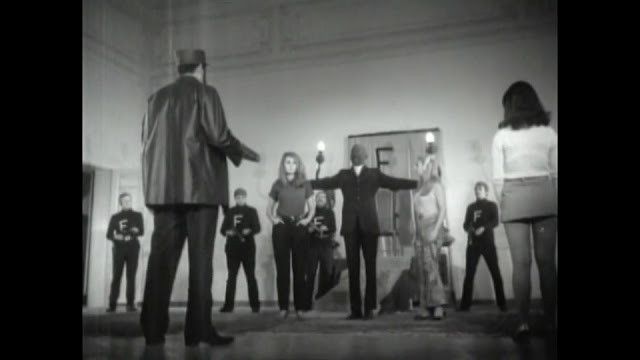 Fantomas is a great villain. Diabolical, violent, untrustworthy, and always possessing a new scheme for world domination. At the rate he murders employees it's a wonder anyone works for him! And that's not even getting into the ones who die in shootouts with either the police/local superheroes or rival crime syndicates (despite his guaranteed protection). 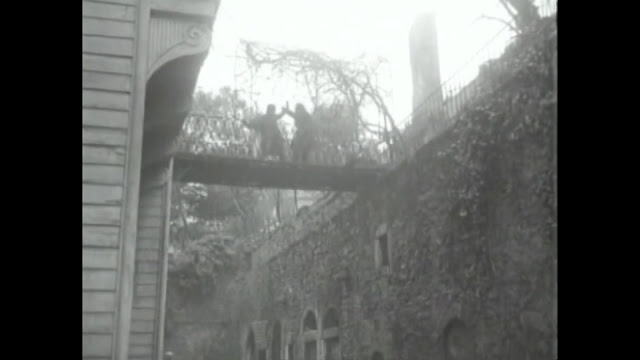 Onto the main henchmen. Behçet is an iron-mitten wearing lieutenant, while Fantomas's moll Gülgün is sure of her place, but falls afoul of her boss. And last up is the Countess/Princess, who Fantomas immediately goes gaga over. Despite his assurances to his current girlfriend, you just know he'll throw her off like an old rag, and sure enough he finds the perfect excuse.
Fantomas's villainous headquarters is a mansion by the Bosphorous, patrolled by guards all dressed in matching F shirts, wielding machine guns. Because nothing says "I'm a law abiding citizen and definitely not Fantomas" than monogrammed henchmen! 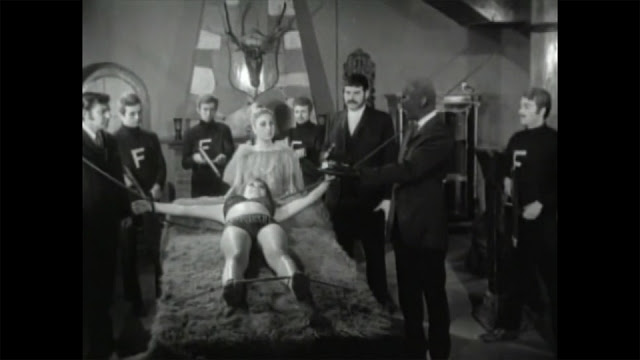 The last major characters are the professor and his daughter. As the creator(?) of the microfilm, he's No. 1 on Fantomas's list, but Demir Pençe is able to bravely rescue him...Before he is promptly re-kidnapped, because protecting people and keeping promises is not Demir Pençe's forte. The poor professor ends up facing a sticky end, after he makes the mistake of taking Fantomas at his word. I thought his daughter would be safe, but she ends up with a grisly fate too! Her dying felt completely unnecessary, and didn't make much sense either. It just felt like a depressing excuse for more carnage.
The acting here is all fine. Demir Karahan is a fun lead, as is the pretty and spunky Nebahat Çehre. Danyal Topatan is fun as the comic relief, while Yıldırım Gencer is your typical intense cop. Necati Er does a great job as Fantomas, masked for almost the entire picture, while Behçet Nacar is a good lead henchman. There are plenty of gorgeous women on display too, from Feri Cansel, Aynur Aydun, and Gülgün Erdem. 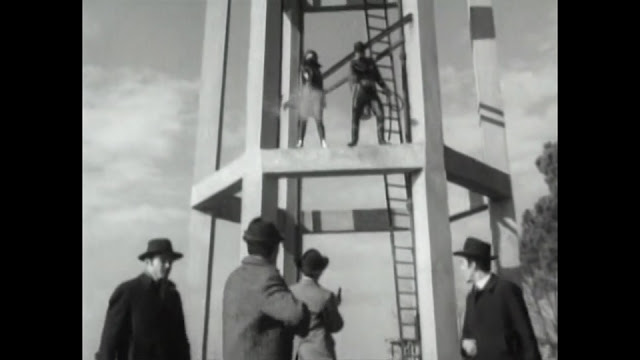 The fight choreography is dynamic, and while none of the hits probably actually connected, most look like they do, and you're frankly not paying attention when the action is this fun and fast-paced.   shootouts   The climax is the movie at its most entertaining, since we know all bets are now off. It's Fantomas's defeat that's the most cathartic, because of his ultimate fate! It's not what I was expecting, and definitely a satisfying end for the masked menace.
Also present are a few dances, and not only are they sexy, they're surprisingly skimpy! Those Turks know how to put on a good show. 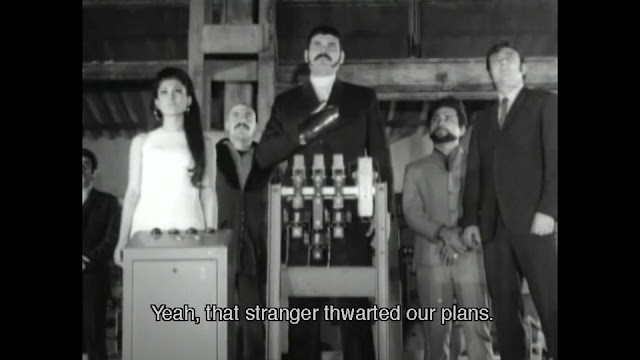 The score is great listening. It's groovy, with a few lively dance beats, and enough James Bond tracks to keep things thrilling. We also get some pieces from western cinema like The Magnificent Seven. Not everything is lifted, and the original pieces all get the job done too.
The direction here is very good! The action is all staged well, as are the chase sequences. There are some really creative shots throughout, including a multi-storey fight sequence. One shot with birds in the climax looks really good! I wonder if it was a happy accident, or deliberate. I'm impressed either way. 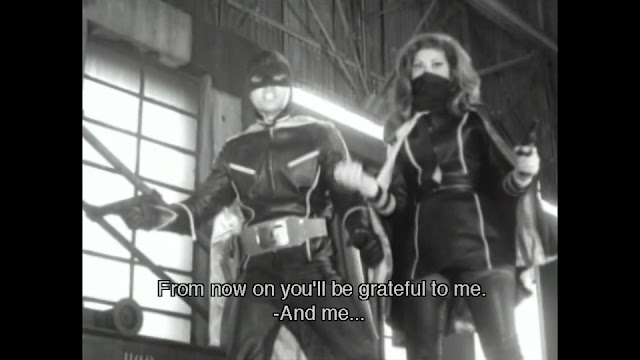 Demir Pençe Korsan Adam is perhaps the quintessential Turkish pulp film. It's a great introduction to the genre, and lots of fun in its own right. If you come into this expecting a big-budgeted Hollywood picture you'll be disappointed, but if you know to expect the opposite of that, it can be fun in an ironic way, or seen totally sincerely. Either way it's neat...
Posted by Chris Hewson at 8:03 AM