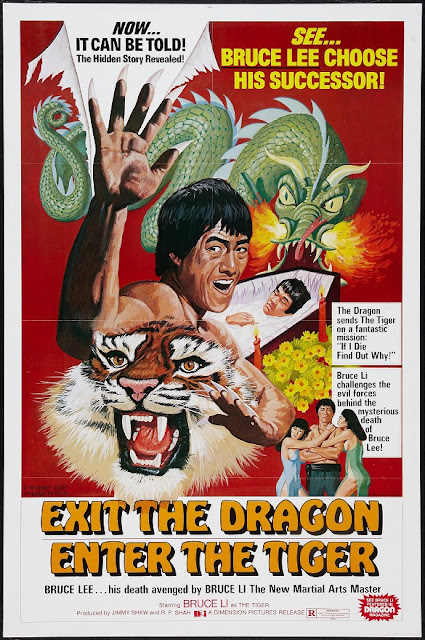 Bruce Lee has just died, and his friend David suspects foul play. He investigates he last woman to see him alive, learning of a secret plot by a drug lord known only as The Baron. Seeking to avenge the Dragon, the newly christened Tiger sets out to find the hidden evidence of this operation, and put it out of business permanently, just as his old friend would have wanted... 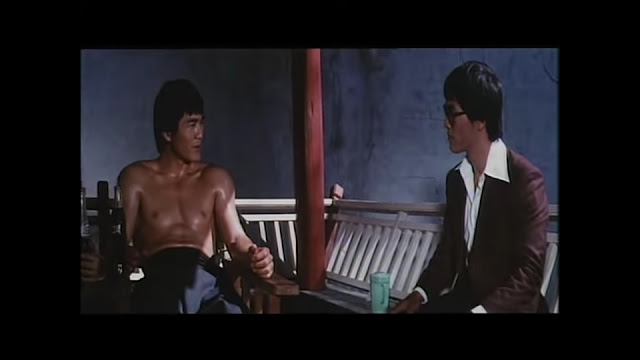 In the wake of Bruce Lee's tragic death, many copycat wannabes sprang up in his place, with increasingly ridiculous pseudonyms. The most notable of these is Bruce Li, because he had the closest resemblance to the star, though it's hardly like gazing into a mirror. Exit the Dragon, Enter the Tiger is a =.
It is strange that the movie is simultaneously trying to push the character of David as a successor and different person, while also casting Bruce Lee knockoff Bruce Li, selling the movie on the fact that this is THE Dragon (or close enough). I think this can be attributed to the [star's] motives, and the film's marketing 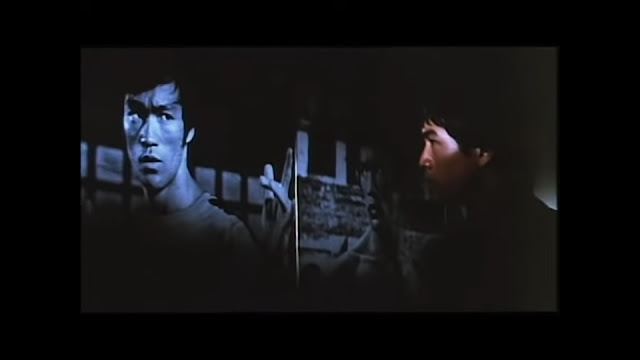 Not content with merely trying to ride Lee's coattails with their replacement, the movie is constantly trying to remind us of the icon, with posters everywhere. Even the villains have Lee posters littering their hideouts.
While the move was only made with the intention of cashing in, I did really like the concept of Lee being a larger-than-life figure who chooses a successor to replace him should anything go wrong, and his man honouring Lee by fighting evil, with the help of his friends, neat disguises, and fancy gadgets. One line I liked which reflected this is "There was a dragon." "And here is a tiger!" 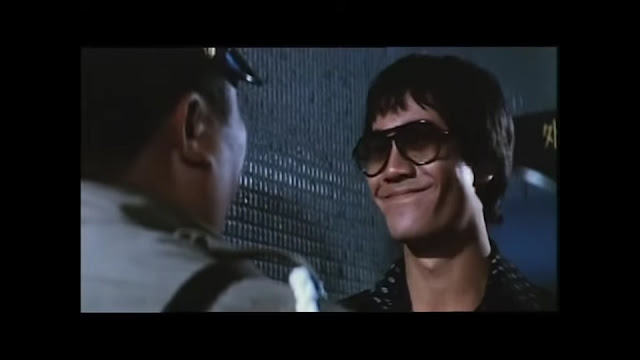 David is an alright protagonist, and you really get the sense he cares about his friends. In fact I think he cares about 'em a little too much! His girlfriend says, with complete sincerity, "If I can mean as much to you as Bruce Lee did, I'll be very happy". Dial it down, mate, and pay more attention to your girl!
What I found most surprising about him is his fallibility! He suffers a real beatdown midway through, and is really put through the wringer! It makes you like him more, as it shows he's not just an invincible warrior. 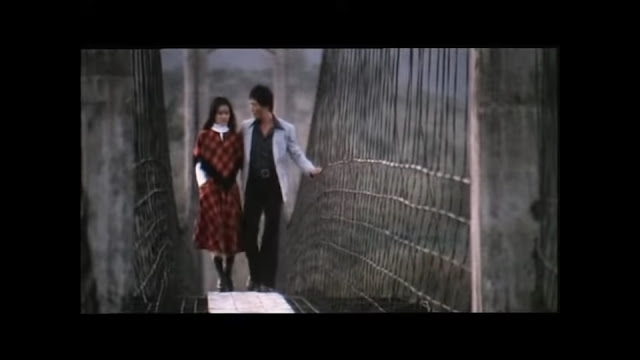 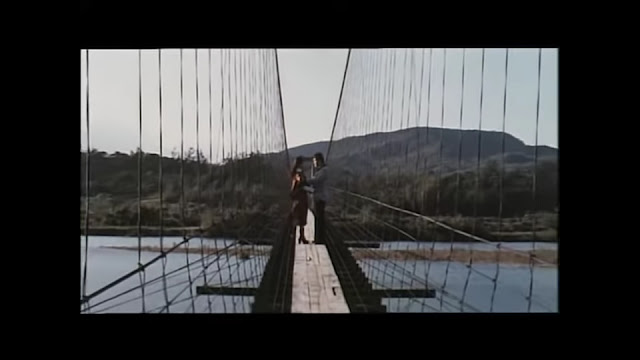 David's allies are ok, though it's a bummer his friend got killed. I was liking the movie building up a roster of characters, and would've been nice and consistent to see them all return in a later film.
The villains are just your typical gangsters. Nothing special. I found one henchman funny with how he offers to find his boss 'for real' no less than 3 times, betraying David each time, and promptly earning another beating. The highlight is the snappily dressed Baron, who goes around in a fancy bowler hat and cravatte, with a sword cane. 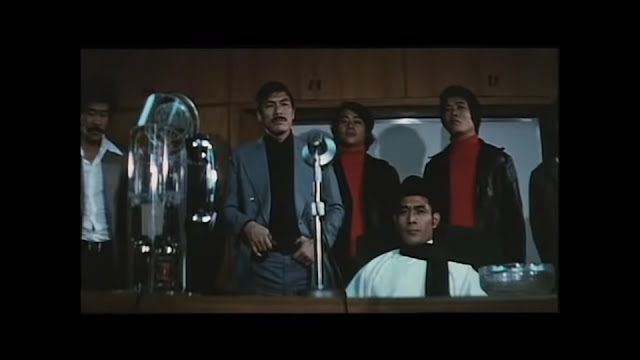 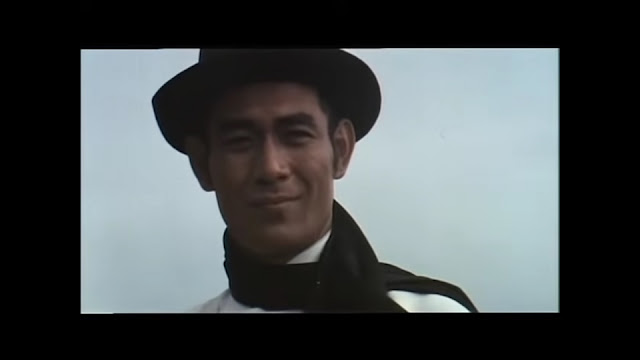 For all the talk of going to the police, they are bizarrely non-existent here, not during the public brawls, and not when David is leaving the broken bodies of his enemies everywhere. And they are completely forgotten by the end, when David just decides to challenge the Barron to a duel to the death, and presumably leaves the police to find his impaled corpse by the ocean.
The plot chugs along at a reasonable pace, and the movie is a breezy watch at only 80 minutes. The climax is surprisingly impressive! It's a pretty stripped back encounter, just David against the main villain (=), =. I also liked the foreshadowing of the back kick, and how it was used in the final fight.   It's the location that deserves the most praise. The rocky outcrop with waves crashing against it is a really =   and is filmed so well. 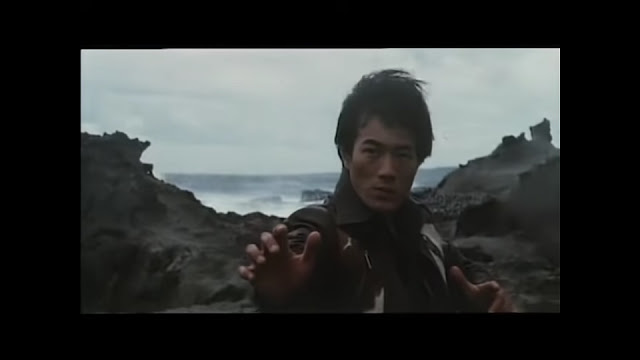 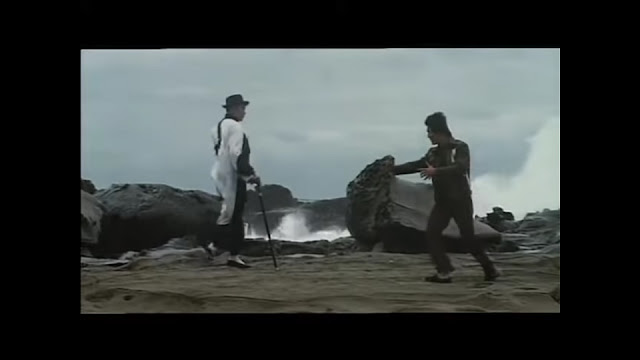 The ending itself however is disappointingly abrupt. As soon as the Baron is dead, the movie just stops. No coda, no happy wrap-up with David and his recovered girlfriend, just a last minute voice-over from Bruce's earlier dialogue, and that's it.
The choreography is pretty decent here. Nothing on par with a real Bruce Lee movie, but most Chinese movies could be reliably engaging with their fight scenes, and this is no exception.   One scene that's less impressive though is the laughable head-bashing later on. It's quite weird, actually. They didn't skimp on the make-up, yet despite looking like he's actually been brutally beaten, there's Ed Wood levels of =. 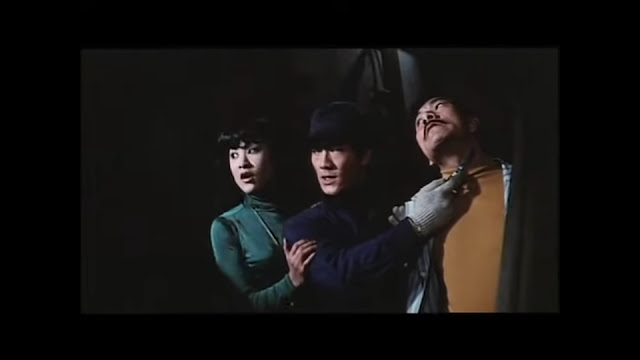 The acting here is alright, and the dub actors all do fine jobs, if incredibly goofy at times. The 'real' Bruce Lee briefly appears, and is played by Le in a splitscreen effect. Of note are two things. One, the Baron's dub actor seems to change in his final battle! And two, none other than James Hong has a role! His voice is instantly recognisable, and it was a real treat. 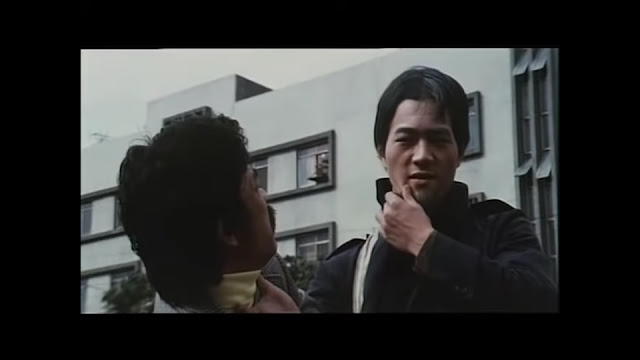 Overall, Exit the Dragon, Enter the Tiger is not one of the worst 'Brucesploitation' films, nor the most tasteless, but it still bears a few problems to its name, some to do with its =, and others all of its own. But if you're gonna watch any films from this subgenre, this is probably the best... 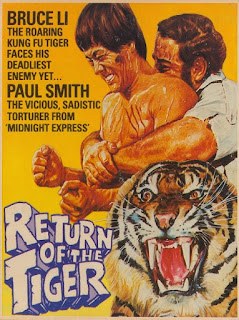 Return of the Tiger
A mysterious man and woman begin making trouble for foreigner Paul's martial arts operations, determined he stop his drug trafficking. He refuses, and tries reasoning with the man, even attempting to hire him as a bodyguard. Paul's opposition meanwhile notices what's going on and also tries hiring the man. Neither realise what these two have really got in store though, but they'll certainly fight to keep their criminal empires... 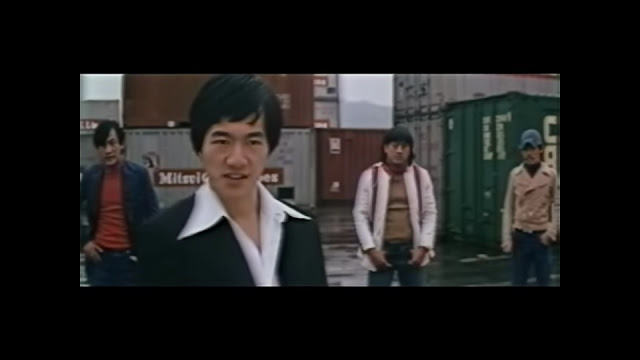 Return of the Tiger is a surprising film in a couple of ways. The first is its status as a sequel, and this is more of a negative. It doesn't follow on from the previous film at all. It's a shame, I was honestly hoping for a continuation to Enter the Tiger, to really go all the way with Bruce Lee's successor being a superhero fighting all manner of crime each entry, with new disguises, gadgets, enemies, and women. Instead we get a movie that doesn't even try and pretend to be a sequel. I suppose this wasn't the fault of the writing, since it's the English title that makes the connection, but still. 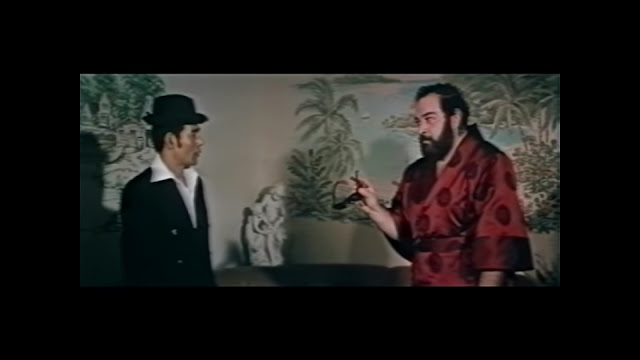 The second surprise is the story itself. It begins with an immediate hook. A mystery pair make an attack on the villains, with abilities and motives that suggest they are very much in control. I was expecting a typical chopsocky protagonist we get to know well. In fact the movie is built on his identity being a mystery, both to the villains and to us.
The two leads are a ballsy duo, who just burst right into the villain's gym, beat up his entire academy, then demand he shut down all his nightclubs, gyms, dojos, and cease his drug smuggling operation. Oh, is that all? He even in complete seriousness suggests Paul should also commit suicide! 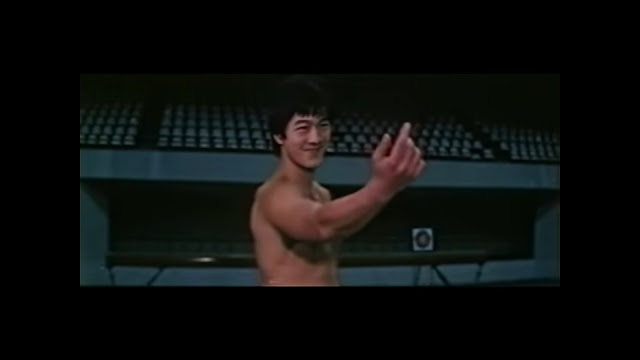 The plot started to lose me at the halfway point, after a major twist revealed a Sleuth style game going on, before being complicated by *another* twist, making everyone's true allegiances and identities hazy at best.
Huge stretches of time go without the lead and his lady friend, meaning we get very little insight into their true personalities, and don't get as close to them as we could've. This also has the effect of focusing on the warring crime lords more than it does the heroes, turning this into more of a crime film than martial arts. 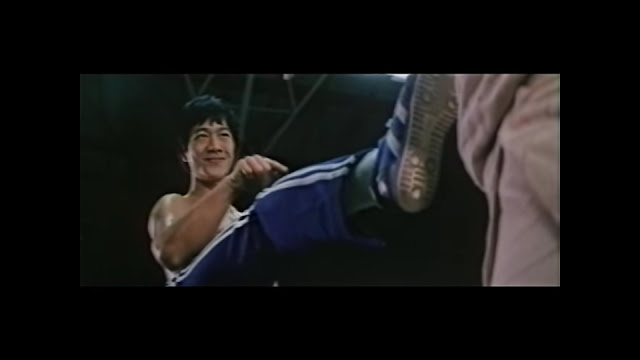 The climax doesn't really clear the plot up for us, instead just delivering a big brawl that has double crosses, triple crosses, and heroes who seriously fall for the oldest trick in the book0"Hey, look behind you", and they do! The bare minimum is that at least we do find out who the heroes really are. As far as explanations go it makes sense, even if it's rushed, though it's a bit mundane. The final one-on-one battle is pretty neat though, even if there is no ending.
Return of the Tiger has an ultra groovy soundtrck, comprising of some 70s bangers like Play That Funky Music, White Boy, =, and =.
The villains are decent, with the main duo being distinct from each-other. I liked their grudging interplay. The henchmen are your typical lot, though one scene amused me. When Paul discovers one of his men is a spy, he sends some others to deal with him. You expect them to just kill the traitor, but they encourage him to spill the beans, even offering him money and a plane ticket to flee the country! Very accommodating! So much so that I was kinda disappointed when they inevitably kill him. I just got such a laugh out of these henchmen genuinely good chums to offer a traitor [money and a plane ticket] if he co-operates.
The fight scenes range from fun to confusing. The best was a nifty motorcycle battle. The weirdest was by far the shipping container scene, where the hero is cornered by goons, only for a container to suddenly movie into view and drop down, releasing a couple dozen men all ready for business. This frightens away the baddies, after which the men immediately get back into the crate and it's flown away, then a taxi comes to get Chang Hung from another shipping container! 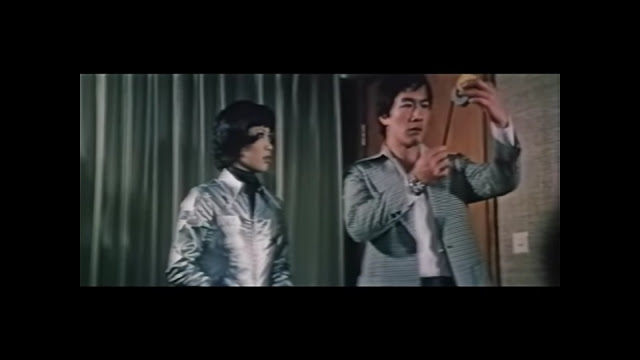 The acting here is alright. Le is a reasonably charismatic lead, and I really liked Angela Mao, though was sad she didn't get to appear more. Paul L. Smith is a fine villain, and gets to throw down like Bud Spencer in the fights. The other main villain is alright, and his dub actor delivers a great evil laugh.
Return of the Tiger has its pluses as a movie, namely it's not at all a 'Brucesploitation' film, outside of who it stars. In some ways it impresses, in others it's a bit boring after a while. At least it's rarely dull, and that's never a bad thing... 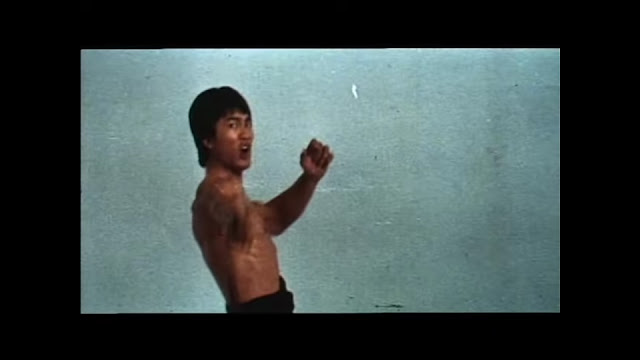 Overall, Bruce Le may have been a decent success if he had tried to do his own thing, though comparisons with Lee would always have been inevitable. The real question is, did he truly honour the man's name? Well, he could fight, and made a few decent movies, so I guess he did alright. As alright as any of these actors could've...
Posted by Chris at 12:30 AM