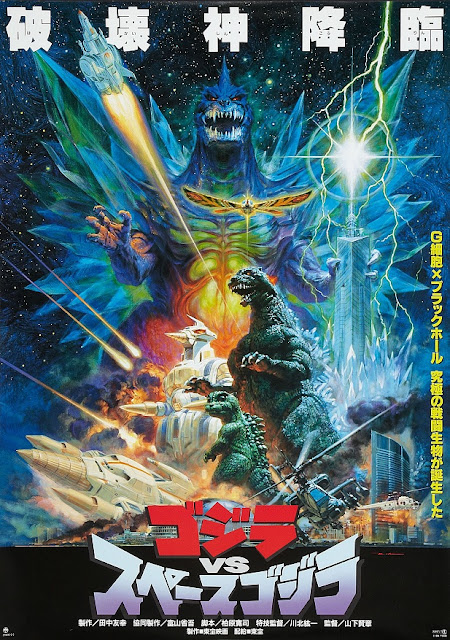 The Japanese government is developing two plans to neutralise Godzilla. The first is the direct one, creating a mobile attack robot named Moguera, while the second is the more human Project T, hiring resident psychic Miki Saegusa to take control of the monster's mind. All these projects might be needed sooner rather than later though, when a diabolical clone emerges from space, kidnapping Godzilla's son and wreaking havoc in Japan... 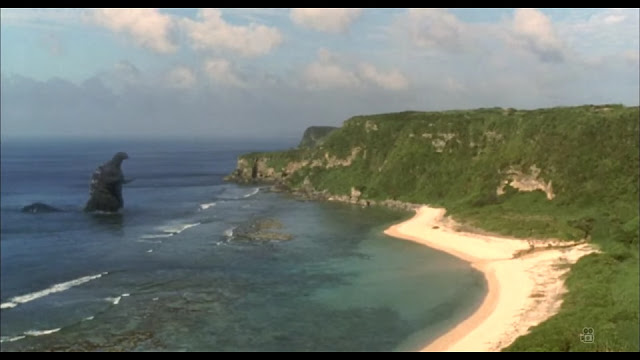 Godzilla vs. Spacegodzilla catches my interest right out of the gate with its goofy yet wonderful title, and in most ways it doesn't disappoint. The movie isn't a favourite of many, with some people feeling it doesn't add to the overall mythos, and feels like a filler entry. While I can see where they're coming from, I don't begrudge it these things, as a series about monsters fighting monsters is allowed to just have a 'fun' entry where they hit each-other, and that's it. There's enough mythos already set up for the story to fit snugly too, without adding any new material. 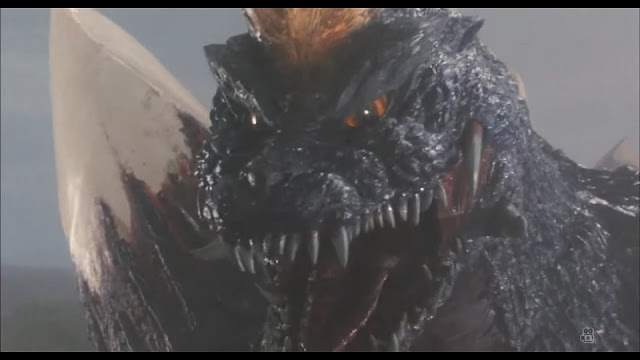 The setting and story for Spacegodzilla is very simple. The first half takes place almost entirely on Godzilla's home Birth Island, and the second half in a city block. I was afraid this would be boring, but this simplicity works in its favour, as the main crux of the movie is a father trying to defend his child from harm. Giant monsters really are just the same as us. They just want to protect their children from danger.
What detracts from the overall experience is the unneccesary 107 minute runtime. The film could've been around 80-90 minutes, easily. This is especially apparent thanks to the completely out of nowhere espionage plot halfway through the film. It's not that it's bad, it just comes so suddenly, without any warning or setup, then ends just as quickly. 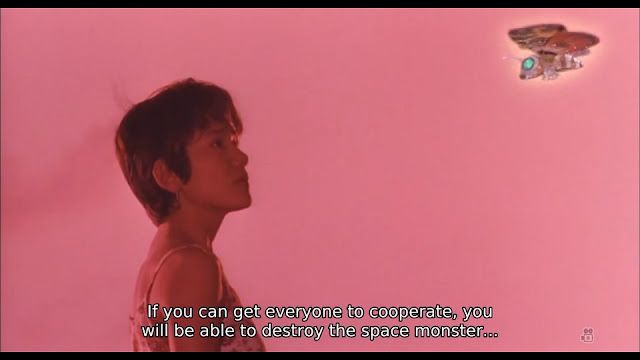 The human cast are decent, though there are two many, and some could have easily been combined. Miki Saegusa finally gets to be the main character, though still shares the screen with four other leads, so she doesn't get as prominent a role as she could've. She's alright, but just doesn't leave much of an impression. Dr. Gondo is more distinctive, and cute, and has a nice connection with past films. The two soldiers are alright, with the more serious one being a love interest for Miki, and the other being comic relief.
Yuki is perhaps the best and most distinctive character, bearing a one-man grudge against Godzilla, and is even willing to befriend his son to get to him! Scoundrel. He's likeable despite his obsession, and the movie does a good job of portraying it as a negative, without demonising him as a character. I did question his intelligence though, if he thinks a single bullet, no matter how fancy, is going to kill the king of the monsters. 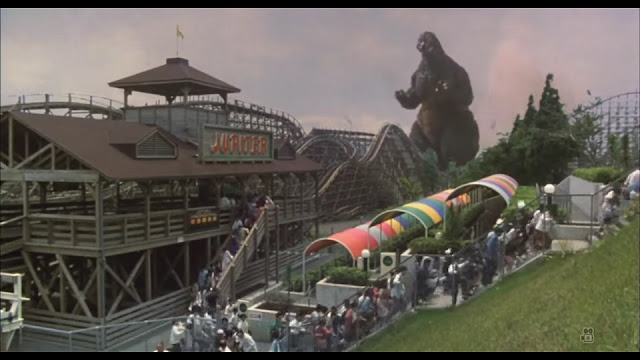 After a while I felt his character arc just kept stalling. You think he's gonna learn the error of his ways, and give up his revenge and settle down with the girl who likes him, but each time he seems like he's learnt this, the dumbass just keeps on hunting Godzilla, most egregiously in the end, ruining his big moment. Thankfully he does finally do the right thing and even gets the girl in he end, though if I was her I would probably have slapped him.
There is one human villain, in the form of the evil-looking doctor who tags along with the crew for the first act, until Miki is kidnapped and he reveals his intentions to use her powers to keep Godzilla under his control. This naturally goes awry. "What went wrong???" he dramatically cries. I don't know, maybe choosing to hatch your scheme when Earth is under invasion by a giant space monster?
One minor character I found amusing was the hilariously overdramatic newsreader. Yet she probably reports more honestly than most do in times of crisis! 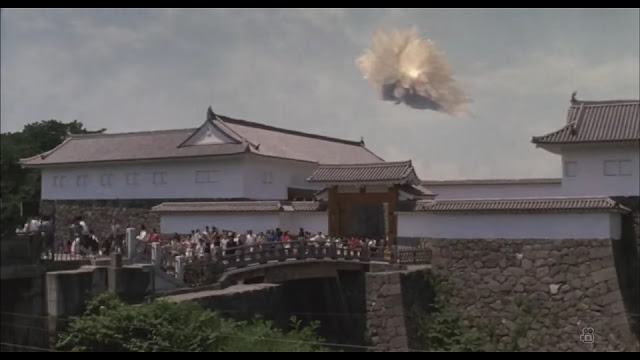 The military are generally sensible here, not portrayed as callous assholes, or as useless bureaucrats. I was confused by why they bizarrely decide to attack Godzilla near the end. Come on guys, you know he's probably here to help, why are you being difficult! And this leads to Yuki losing his cool again and using Moguera to get in on the action, though luckily the other two stop him, and Godzilla presumably takes the first few laser shots as a way of getting his attention. That's a relief! 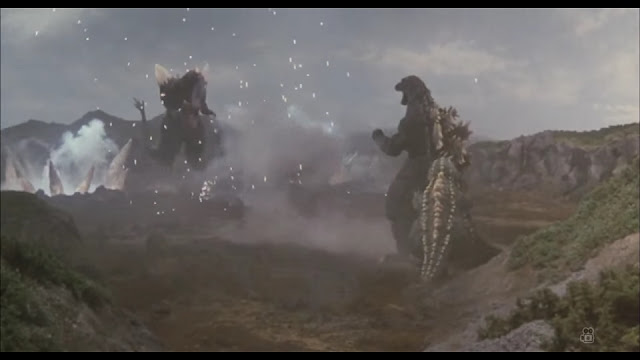 The climax is a spectacular brawl, and culminates with one of Godzilla's most satisfying victories. Although I admit I started to zone out after a while, with the endless sea of Roger's and Hai's all blending together a little. The action did drag a lot after Spacegodzilla's destruction too. I kept looking at the runtime and going 'It it still not over yet??'. But thankfully the ending itself is lovely! It's low-key and romantic, and shows that even amidst the destruction of this city block, things are still hopeful, and that humanity can count on Godzilla as a friend. 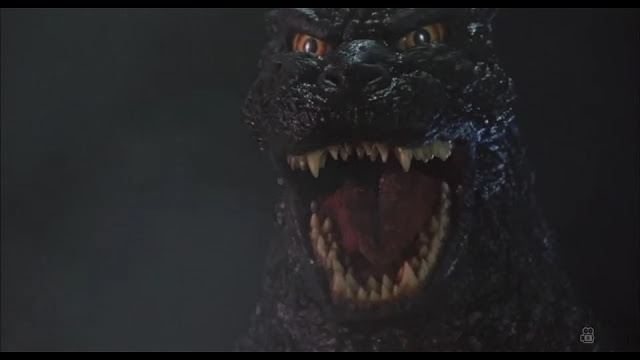 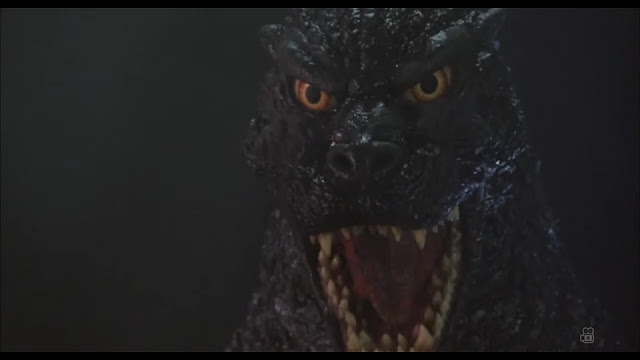 Godzilla is an unequivocal hero here, even if he does have a bad habit of leveling buildings when he goes for a stroll on the town. He's attacked by man, by monsters, and by robots, all while trying to protect his son. If there's one dad deserving of a Father's Day present, it's him!
One thing that sounds a little off though is his roar. His regular iconic roar is here, but alongside a more high-pitched screech he makes. It threw me through a loop every time I heard it. It just sounds...wrong. Spacegodzilla's roar is more fitting though, the higher pitch working in his favour to make him different. 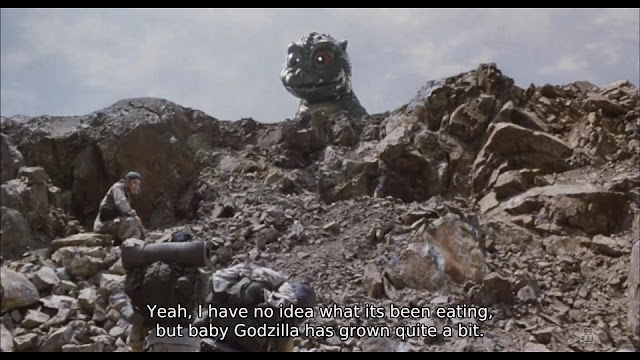 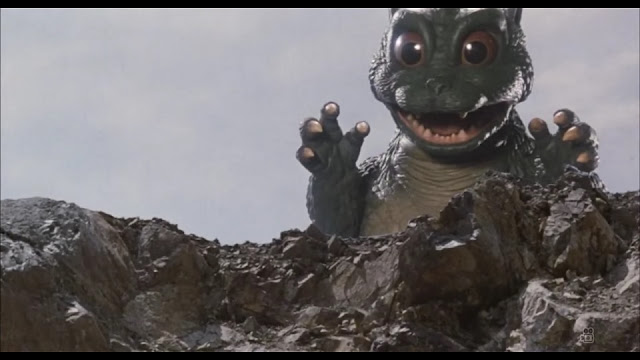 His son Minilla continues to be absolutely adorable! He's a gentle giant, and friend to all. Some say Godzilla is a heartless monster, but tell me, could anything evil spawn such an adorable creature? The only issue is that he disappears midway through, and isn't seen again till the end of the film. I understand why (even if his imprisonment wasn't established in the clearest way), but it's still a bit weird how totally he disappears.
Spacegodzilla is a neat villain. Almost identical to regular Godzilla, his bulking crystalline nature gives him a distinct appearance, and his meaner visuals come across well, especially combined with his actions. He's a bully, even attacking Minilla!
The robot Moguera is a welcome addition to the film, originally having appeared in the 1957 film The Mysterians. It's nice seeing how respectful Toho are of their past, and bringing forgotten or obscure characters back into the limelight. Moguera didn't really get much to do in his original film, playing second fiddle to his alien masters, but here he gets the screentime he deserves. He may not be as visually interesting as Mechagodzilla of the previous film, but he's still a worthy mecha. 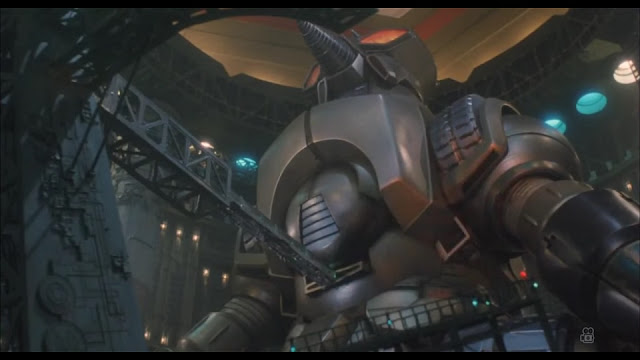 The moral of the movie is a bit skew-whiff. We mustn't pollute space with leftover Godzilla cells from battles with his plant clones, otherwise they might reach a black hole and create an evil twin. Ummm, ok? It tries to use this as a jumping off point to criticise general space pollution, which is good, though the way they do it is a bit wonky, especially when neither of the two theories that are proffered for Spacegodzilla's creation are due to man's actions.
The effects are a treat! The cityscapes and destruction is all fantastically realised, as is the integration of monsters with their surroundings. There's never a fake moment. Godzilla is perfectly designed, with a few new touches, such as more orange eyes. They're menacing in a way, despite his more heroic role here. Spacegodzilla. His back crystals do look a little lightweight and hollow, but I otherwise applaud the effort. Minilla looks a little plastic-y, like a big toy, but this is a small thing, and he's otherwise fantastic. And lastly, Moguera is fantastically designed, and even has a few different forms! Such a level of effort was put here. 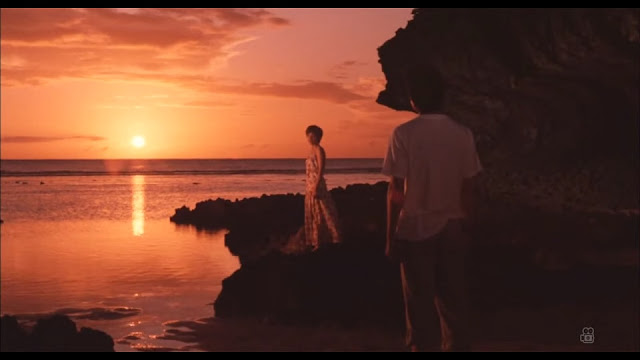 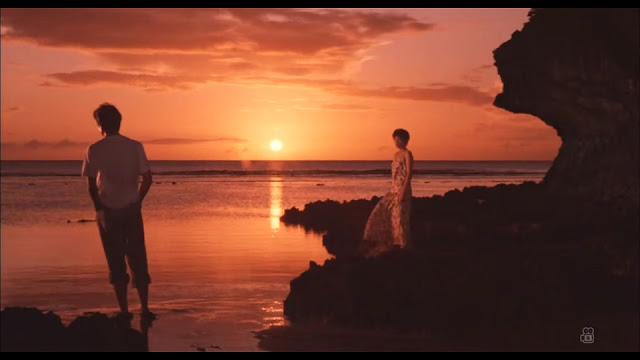 The direction here is very good, stunning at times with its visuals. Not only does the lack of locations not detract from the movie's appearance, it allows the director to really flesh out these places, and we get to know them very well. The lighting is again great, complementing the scenery perfectly.
The actors all do fine jobs. Megumi Odaka is still a bit so-so as Miki Saegusa. Not really her fault though, moreso the script. Akira Emoto impresses as Yuki, and I liked the other two guys, even if they did blend together at times. Towako Yoshikawa meanwhile is cute as a button! The Heisei's tradition of casting Americans who can't act once again makes an appearance. It's amusingly cheesy, and I can't fault Toho or the Japanese for being diverse.
The music is neat! Akira Ifukube did not return this time round, for a variety of reasons, but Takayuki Hattori does a fine job. What surprised me most of all (pleasantly), was the J-pop ballad at the end, which serenades Godzilla as he walks back to his home during the rolling credits. Even when you think it's gonna freeze-frame on the Earth for the last part of it, it shows Mothra flying about, from several different angles too! 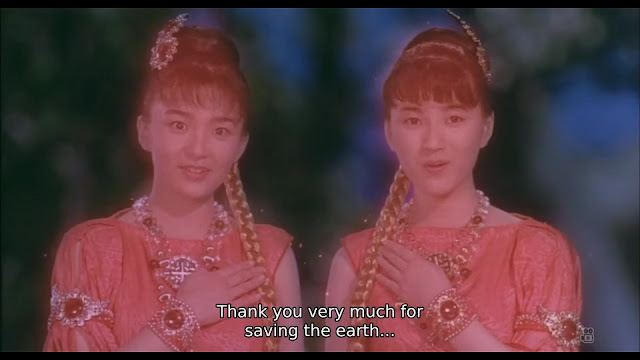 Godzilla vs. Spacegdzilla isn't a perfect entry in the series, but it's got far more good qualities than bad, and is a great way to spend an afternoon in...
Posted by Chris at 8:24 AM