Well here's my 100th review! I planned on doing something special, and I was going to review The Mask of Fu Manchu (per my blog's title) until I realized that my 50th review was Neon Maniacs. Since Neon Maniacs was a horror film with a large concert (kinda) for the climax, I decided that I'd review another rock 'n' roll horror movie for my 100th review. So, come my 150th, 200th, 250th, etc., I'll be reviewing stuff like Trick 'r Treat, Rock and Roll Nightmare, Hard Rock Zombies, etc. So without further delay, here's my review for Rock 'n' Roll Cowboys!... 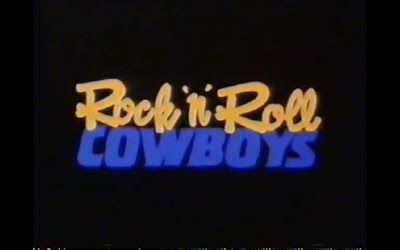 If there's one thing us Australians are good for, it's exploitation! From the soap opera tv series Number 96, which featured full frontal nudity and graphic sex scenes, to the women-in-prison show Prisoner (believe it or not, but the the women-in-prison genre is practically mainstream over here!), Razorback, the killer pig movie, and Mad Dog Morgan, a film that was censored in America by Troma! (which I imagine they were forced to do, due to the 'moral guardians').

What I'm reviewing today is a massively obscure Ozploitation movie about a super-psycho-christian who believes that rock music has destroyed the future, so he time-travels back to destroy it...Or at least, that's what the film's trailer would have you believe. The film's actual plot isn't far off though, and is still some crazy stuff! 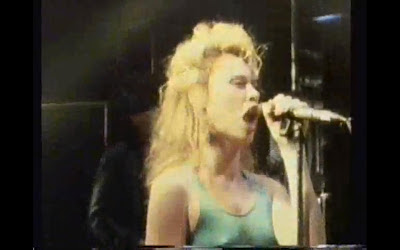 The movie starts off with a bunch of rockers setting up in a dingy recording studio. While singing their song (which is cool, but a bit repetitive), the studio's power short cicuits...Which one of the studio techs learns the hard way when trying to stop it!-"Got no power. I got power, I got power! Like 250 volts straight in the brainbox! I just turned my arse into a nuclear reactor!". One band member, Stevie (Greg Parke), leaves in a huff, and the singer, Tina (Niki Coghill) goes after him. The studio's power comes back on (when a mysterious spiked ball rolls onto the room's rafters), but the rest of the band all head out to leave, and two groupies hanging about asks Mickey (David Franklin) and Eddie (Peter Phelps), the two technicians out on a date. Mickey declines, as he's busy with work, and Eddie and the girls head off. 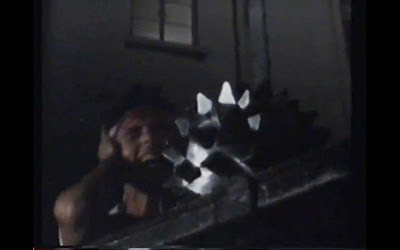 Upstairs is a strange man, talking to someone on a transceiver, and back in the recording studio, weird stuff start happening. Mickey sees a note on the ground-"Have you heard the song of Jesus?". He tosses it away, and in comes Tina. The two drink and chat until Tina falls asleep. Then more weird events occur... 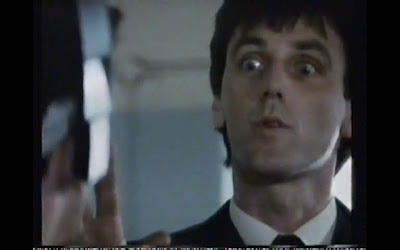 Mickey sees a weird spiked metal ball up in the rafters, and he climbs up to get to it, which takes him outside. He touches the ball and is immediately wracked with pain. Then something stupid happens. Mickey hears a tune (the movie's main theme) coming from a high up window, and, for no reason, Mickey decides to climb up to the precarious ledge to the window! He's let in the room by a crazy-eyed guy (John Doyle), who has a high-tech sound-thought-system (that he created) set up. After giving Mickey a drink drugged with a...plastic star thingie, the man let's Mickey try out the machine. Mickey tries it and it makes him trip out, seeing some strange stuff.

The film cuts to skeezy record producer (I think), Harvey (Ben Franklin), who's Mickey's (and the band from the start's) boss. Mickey tells Harvey about the thought-synthesizer.

Shard will give the band the thought synthesizer on the one condition that they let Mickey be the main singer. Harvey and the band refuse and Damien leaves with the machine. 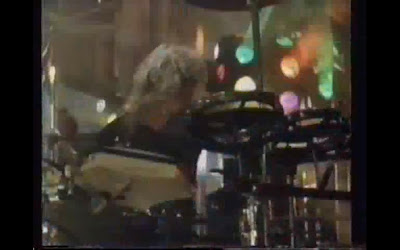 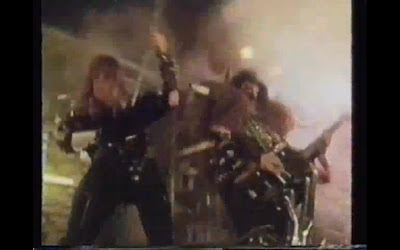 Next follows an incredibly repetitive instrumental song that made me want to bash my head into the speakers! Mickey and Tina talk, and he yells at her for taking Stevie's side before. She walks off in a huff, and the drunken Mickey leaves the bar and stumbles into a nearby church, where he collapses. Inside is Damien, who talks about when he was a kid, he watched Mickey on tv-something to do with Pondorosa Cowboys. Mickey mumbles that he's never been on tv, and one brief trippy dream sequence later, he's in his caravan being woken up by Eddie. 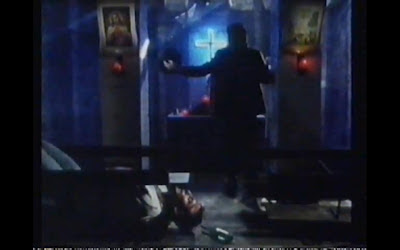 Eddie tells Mickey that one of the band, Dupont tried to recreate Shard's thought synthesizer, and now thinks he's a monkey.

Rather than have Mickey play Dupont's part, the band decides to play a recording of Dupont's instrument playing live. Mickey leaves in a rage, and later that night, he recieves the thought synthesizer in the mail, along with a bunch of plastic stars (in a bag labelled 'eat me', which Mickey does with one! Dude, they could be anything! Dumbass). 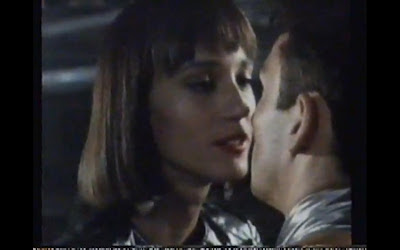 Mickey is called back to the studio and convinced to use the synthesizer to help the band (all of what I just summarized takes place offcreen!), and he makes the band sound better than ever before. Later that night (I guess), the band are at a big party, organized by Shard, and his evil plans come to fruition... 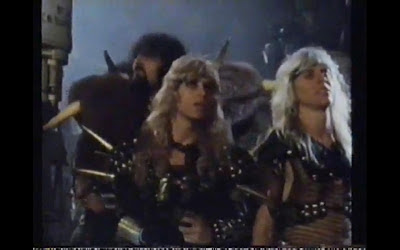 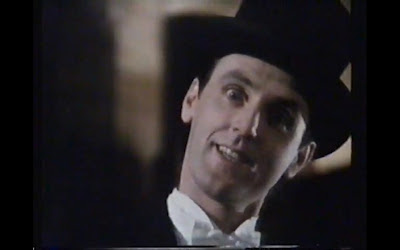 There are also a few maddenly unexplained plot points. What did Harvey's secretary (I think) Karla (Dee Krainz) have to do with anything? Is she working for Shard? It's never explained. And who the hell were the guys in yellow suits and gas masks at the climax who seemed to be working for Shard? And what's with Damien Shard? Who is he? What does he want to destroy rock music for? Because he watched a super-catholic tv show when he was a kid? That's not a good enough reason for someone to be a supervillain. The film's trailer gives a better backstory/motivation and that wasn't even in the movie! (What the trailers says definitely makes sense in the film's context!). And the ending is also crazy nonsensical. It made me just go "huh?!". 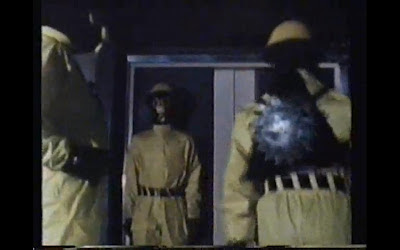 As for the film's music, it's half-and-half for me. Some songs were good, and others I didn't like so much.

The acting is all decent, with John Doyle being the highlight as the crazy-eyed villain Damien Shard. He doesn't get all that much screentime though, and he's defeated really easily at the end-too easily! 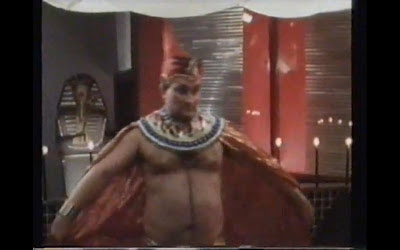 The best thing about Rock 'n' Roll Cowboys is how quotable it is!
"That was a really weird dream, man! Monkeys with keyboards were trying to strangle me!"
"That was a holy instrument, Mickey, and you profaned it. You made the band sound...good!"
"Don't die Mickey! People only die in the movies, Mickey!"
"Who changed my guitar into a baseball bat?" (This isn't memorable mainly because of the line, but more from its delivery).

I do recommend Rock 'n' Roll Cowboys, even if it isn't the best, or the craziest rock 'n' roll horror flick out there...

This post is part of the The Camp and Cult Blogathon (I tried to link the Camp and Cult portion of this post's title, but it wouldn't let me, so that's down here...)...
Posted by Chris Hewson at 7:51 AM