The Camp and Cult Blogathon-Thunder of the Gigantic Serpent (1988) 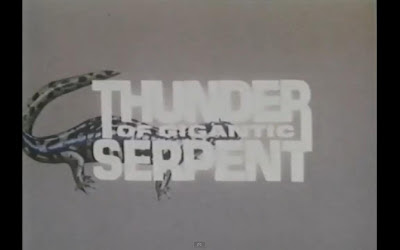 I've mentioned a few times about how Pierre Kirby is so badass, that he fought a giant snake, saving Hong Kong, and I was never lying!...Ok, I was embellishing a bit. Since this is your usual cut-and-paste IFD fare, the monster movie and the Pierre Kirby footage are separate from one another. But still...

Thunder of the Gigantic Serpent opens with thunder and a rockslide, then cuts to the evil terrorist leader Solomon (Edowan Bersma), and his henchman Jackson. Solomon wants to steal 'the formula', a government project designed to increase the size of things. Solomon has a cartoony evil villain speech-"Once I get the formula, I will be in control of the world's food production. Think of the power I wil have! Haaaah! Every nation on Earth will bow to my will!". 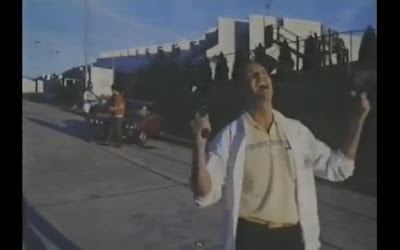 The film then tries to give its audience whiplash, with the scene going from an evil terrorist leader laughing maniacly about ruling the world, then cut to a little girl making a bow for her pet while happy music plays! The little girl is Ting, and she's one of the leads of Movie A. She's in her bedroom with her new pet snake (which is apparently so domestic that it understands English, and nods yes or no to what Ting's saying!), trying to think of a name for him. She names it Mozla (I'm not sure on the spelling. Any of my readers familiar with Greek cyrillic?).....

Next, the movie cuts to the labs where 'the formula' (it's always called 'the formula', even though it's a machine!) is being tested on plants. The military scientists decide to test it on living animals, much to the horror of the scientist who made 'the formula' (and by horrified, I mean the dub actor talks with all the nonchallance of a tranquilizer!). 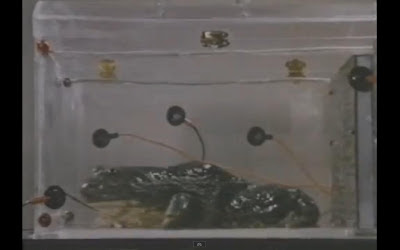 Another scientist, Dr. T (no, he doesn't have a mohawk or jewellry) uses 'the formula' on a frog, making it grow. Ther success is short-lived though, as the research base is attacked by 'Solomon's' henchmen. The base's soldiers try to fight back, but they're all useless, and most of them die without getting a shot off! All the scientists are killed except for a woman, who drives off with the 'formula' and fakes a car crash to make the goons think she's dead.

"But Chris, the film's been on for sixteen minutes so far-where's Pierre Kirby?" You're probably thinking. The film has deemed him non-important compared to Ting's hill rollerskating! After she's bullied by two other kids, the film cuts to YESPIERREKIRBY! Finally, movie! You only took nineteen minutes before you introduced your hero! 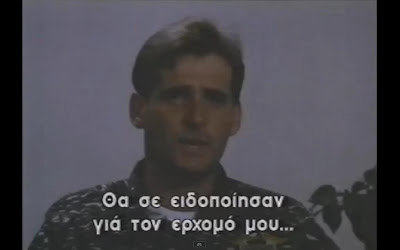 Pierre Kirby plays a 'highly trained specialist, who always works alone', named...wait for it!...Ted Fast! His name in this movie is literally Ted Fast! He's assigned to take down Solomon and his group.

On her way home, Ting finds 'the formula', and takes it home, thinking it'd be a great home for Mozla. When she gets home, she puts Mozla in 'the formula', and she sees switches on it, which she decides to flick. A short while later, Mozla grows rapidly, and Ting has to move him elsewhere. One montage (one. long. montage!) of her playing with the bigger Mozla later, Solomon's gang find out that she has 'the formula'. 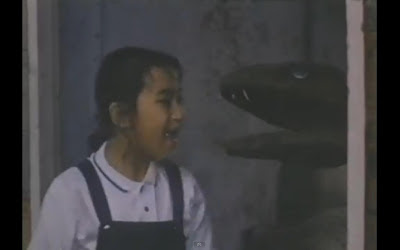 Meanwhile, Police Inspector Chow is investigating the lab incident, despite being blown off by the military, who find Lin, the surviving scientist, who's in a hospital. While she tells them what happened, Ted Fast is hunting down Dewey Bosworth (an IFD regular, who was regularly killed by Pierre Kirby). Ted Fast kills Dewey, and is out of the movie for another fifteen minutes! 'Yay'! 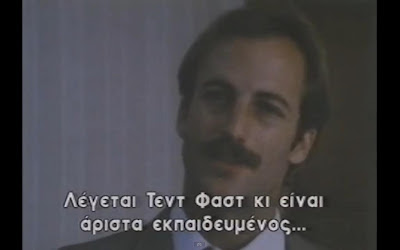 Inspector Chow finds out the hospital where Lin is kept (under a false name), and he goes over to ask what happened at Lab 707. Lin denies everything, and Chow leaves, sure that Lin will confess soon.

Solomon is talking with a henchgoon on his swank 80's brick phone, and orders the goon to find Lin, as she might know 'the formula's' location. Meanwhile, Ted Fast is hunting down two more of Solomon's men, and fights them in a hilarious gunbattle-who knew that people propel several feet forward when shot in the chest! 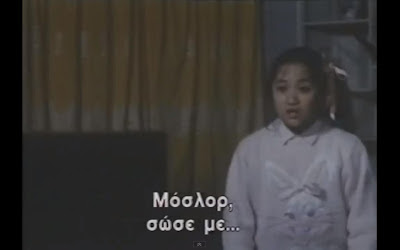 Lin is let out of the hospital (well, I guess, we never see her leave, she's just suddenly at her house, looking remarkably well for someone who was in a car crash only a day or two prior!) and waiting at her house are a gang of 'Solomon's' henchman. After they rough her up a bit and demand to know where 'the formula is', Inspector Chow and his partner come to the rescue (why isn't the army protecting Lin?! She's just alone in her house when a group of hitmen arrive!). Out of gratitude, Lin tells Chow about Project Thunder (the name of Lab 707's size operation project).

The military general and Chow butt heads at Ting's house, and afterwards, Ted Fast talks with Chow (who, by the power of cut'n'paste, he just happens to know!), and later, the terrorists kidnap Ting. Mozla follows, but is caught in an electric-fence trap set up by the goons. 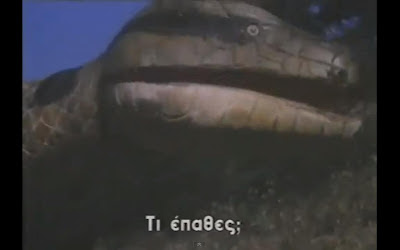 Mozla grows even bigger and sets out on a destructive quest to save Ting...And Pierre Kirby is out effortlessly dispatching terrorist goons. He's sure got a lot less on his plate than Inspector Chow!... 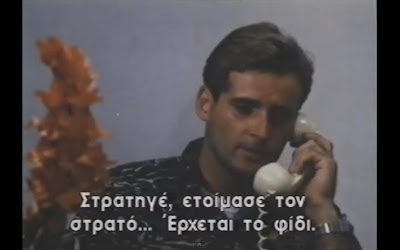 Poor Ted Fast. A giant monster is threatening Hong Kong and he's stuck talking with people on the phone for most of his screentime. At least he trashes Solomon and his gang though! 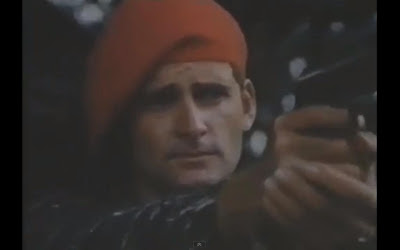 Thunder of the Gigantic Serpent is simultaneously Pierre Kirby's best and worst film. He's barely in it, with ten minutes of screentime at the absolute most, but, he plays a hero named Ted Fast!, and he fights an over-the-top 80's villain (played awesomely by IFD regular Edowan Bersma), and quotes Dirty Harry along the way! And he at least cut'n'paste interacts with a giant-monster movie, so that counts for something, I guess.

The Movia A portion is good, but it focuses a lot more on the terrorist storyline than one would want, until the hour-or-so mark, when Mozla finally grows to Godzilla proportions. 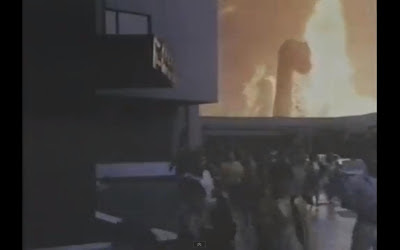 Speaking of Mozla, to quote The Cinema Snob(Brad Jones)'s 'review' of Thunder, "There isn't a moment in this movie where this snake looks real, it always looks like a puppet, but I have to be honest, sometimes it really does fucking look like a giant puppet!". Yeah, that's pretty accurate! The work for giant-Mozla is pretty ok! 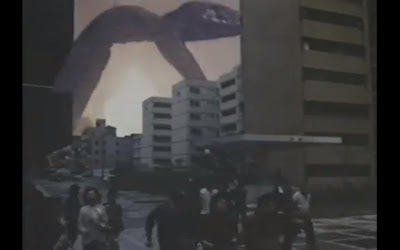 The film has a darkly-funny scene, just before Mozla destroys a bridge. A couple are driving across the bridge, and the girlfriend is whining about how she doesn't want to go to her boyfriend's mother's house. Well you got your wish, lady!

There's one stupid scene, where Billy, the lead villain of Movie A has Ting hostage in a high rise, and midway through the snake's city attack he looks out the window and realizes what's going on? HE COULDN'T HEAR THE GIANT SNAKE FIGHTING THE ARMY RIGHT OUTSIDE HIS BUILDING?!

Also, the ending to Movie A is pretty stupid. When Mozla is dead, Chow goes on a tirade to the General about how if he had notified the police on the situation earlier, then innocent lives would have been saved (and then he knocks the general out). Well that's bullshit! What good would it have done for the police to have known all along? That wouldn't have changed anything! By your logic, if you want to avenge the loss of innocent lives, it's Ting you should be punching for starting the whole mess, Chow!

All in all, Movie A is a pretty good monster movie, although be warned, Ting's dub voice is cruel, CRUEL! If you enjoy hearing little girls shrieking 'MMMMMOOOOOOZZZZZZZZZZZLLLLLLAAAAAAAAAAAAA!!!!!!' annoyingly, over and over (and over! and over!) again, then you'll enjoy those parts of the movie much more than I did!

As for Movie B, it takes up far, far less screentime than it should, but what there is of it is fun! 80's style! Especially in the final showdown between Ted Fast and Solomon, which contains one Dirty Harry quote (Ted Fast: "Go on, shoot, make my day, Punk!"), lifted usage of Neverland, by The Sisters of Mercy, Ted Fast completely dominating Solomon, and a hilariously impossible usage of a hat! 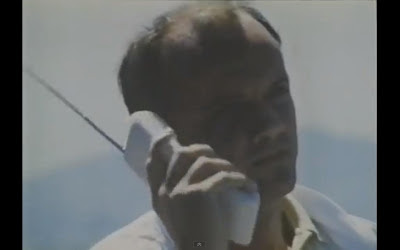 Seriously, Solomon hits Ted Fast only once during their big fight! And that's a cheap shot to the groin-then Solomon wimps out of the fight and goes for a gun...and Pierre Kirby throws his beret onto Solomon's hand, which knocks it skyward, allowing him to tackle Solomon! Yeah! A beret knocked someone's aim off!

The finale has one weird thing about it. At the start of the scene, when Pierre Kirby approaches the car Solomon's in, he pulls his gun out and says what I think is "Hold on today, uh, Solomon?"-What?! What the what?! 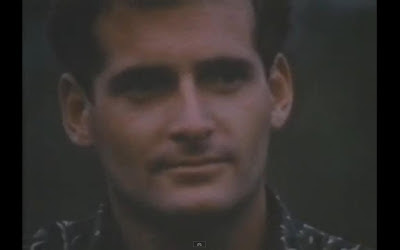 Movie B has one hokey thing going for it. Whenever the villains talk about Ted Fast, they always call him Ted, like they're on first name terms with him-"Quick, run, Ted's coming!". Although, to be fair, 'Fast's coming' would have sounded weird!

So, in closing, THIS IS A MOVIE ABOUT PIERRE KIRBY AS A MAN NAMED TED FAST! WHO IS VAGUELY INVOLVED IN BATTLING A GIANT SNAKE Go forth and watch!

The Camp and Cult Blogathon (I tried to link the Camp and Cult portion of this post's title, but it wouldn't let me, so that's down here...)...
Posted by Chris Hewson at 8:39 AM