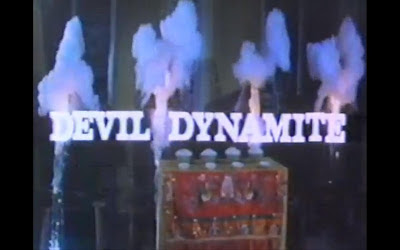 Yeah, there's a Counter Destroyer 2! Or a Robo-Vampire 3, depending on which alternate titles you go by (and if you're wondering what Robo Vampire 2 is, if it even exists, well...). Just like those prior two, Devil Dynamite is a Filmark cut'n'paste movie, and contains just as much crazy as a film can!... Mind you, I'm only reviewing the Filmark footage, not the presumaby-boring Movie A footage

Devil Dynamite lies to the audience from the very beginning, with its 'a Joe Livingstone film' credit-Riiiight, Tomas, riiight... 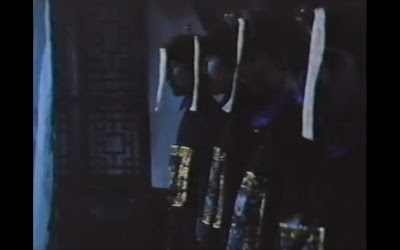 DD opens with a monk doing magic stuff. He's aproached by a criminal associate. Monk warns the associate that he is being watched. The associate rebuffs Monk, saying the vampires are their slaves (don't you just love films that skip any and all exposition?). Monk says that the watcher is someone else. Then, for no apparent reason, the guy, who I'd might-as-well call Boss, since he's never named (I also *LOVE* films that don't think the naming of characters as something important!) gets out a voodoo doll of the monk and chants, causing the monk great pain. When the guy stops, the monk acts like nothing happened (??) and summons their vampires (of the hopping variety). The two have victims for the vampires thrown into the room. The vampires give the prisoners what looks like a shoulder rub (Revenge of the Cybermen much?), and they kill them. 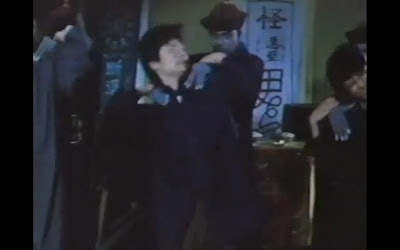 One of Boss' henchgoons pipes up-"Listen boss, Madame Mary will be very happy with these vampire killers, and they can help us with our smuggling, can't they!"...Uh, or you could just get hired help, it'd be a lot easier than taking the time to summon vampires that can barely move their arms! As for who 'Madame Mary' is, I'm assuming she's a character in Movie A to this Movie B storyline. Then Boss lets out an overacted evil laugh, and the movie cuts away... 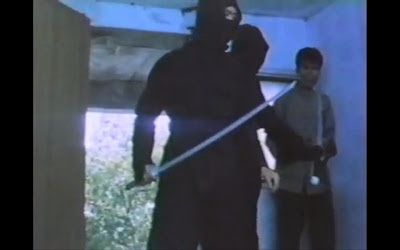 ...To a ninja flying across the night sky! A bunch more ninjas arrive to the area, and their ninja-boss gives them instructions to kidnap 'Steven Cox'. The next day, the ninjas attack a...place, asking for Steven Cox, and are in turn attacked by hopping vampires. So far, this film is sane!...

The vampires wipe the ninjas out, and Boss and Monk view the action, pleased at the success of their vamps. The movie cuts to the vamps attacking cops in a bar...or at least, I assume they're cops, seeing as how one of them randomly transforms into Robocop! 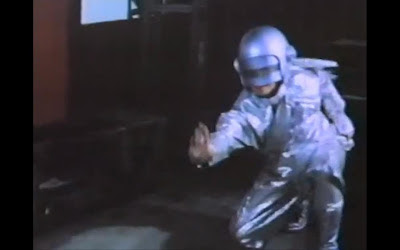 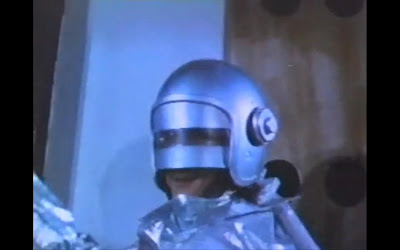 He wishes he was Robocop! He looks more like he's the Silver Ranger!

Robo-random dude and his associate flee from the bar, and the guy tells Robocop that the things were vampires. "There's no such thing as vampires!", says the magical cyborg ninja who just battled vampires! you'd think he'd be open to things like that, being a magic robot and all! They go back into the restaurant to see if the vampires are stil there, and all that remains are a dozen-or-so corpses. Great job you did saving them, Robocop! 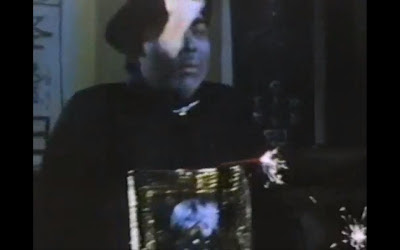 The film cuts to Monk  putting magical firecrackers on his vampire. Umm, yeah... The movie suddenly cuts to a group of hoppping zombie-ninjasWHATHEFUCK?!attacking a couple of kids. Robo-Ranger teleports into the room and beats the crap outta the zmbjas. The film then gets an immediate case of whiplash when it abruptly cuts to Robocop attacking Monk's hideout. He's pretty succesfull against the vampires, but nearly gets bitten (three movies into the Robo Vampire 'series' and we've only got a tease at a vampire-robot! Grr...). The film immediately cuts to Robocop back at the house with the two kids, who are again under attack by the bouncing undead (movie, WHO ARE THESE KIDS?!). After another fight, the boy and Roboguy exchange confusing dialogue. 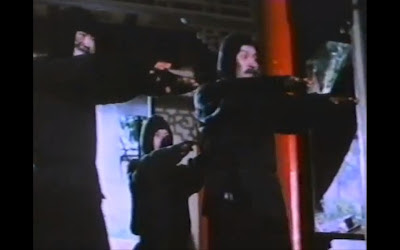 Robocop meets with his Taoist master, and is to be taught advanced techniques, so he can deal with the vampires. The films switches to Boss and Monk, who get informed that Mary, the villain of Movie-A, I guess, has been killed. Boss reacts to the news with all the underacting he can muster, and he nonchalantly orders for the vampires to be sent out... 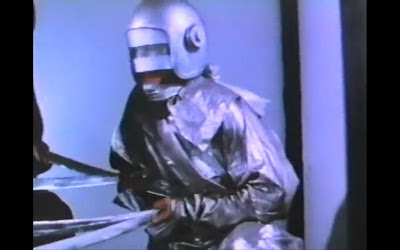 At half-an-hour long, Devil Dynamite is longer than most IFD/Filmark cut'n'paste films, but it squanders the longer than usual running time in order to have nonstop action and no plot (and what plot there is is unexplained and confusing), which makes the movie pretty boring. That's right, someone managed to make a film about a magical Robocop battling vampires boring!

As for the Robocop facsimile, it's a pretty terrible costume, and there's zero explanation on who the character is meant to be. The 'special training' he recieves before the climax amounts to nothing, and he still gets his ass kicked after a while, and his mentor has to bail him out! This mentor and Puma Man's Vladinho must meet at the 'overrused superhero mentors' meetings weekly! There is one cool bit though-after the mentor brings Robocop back to life, he robo-moonwalks! 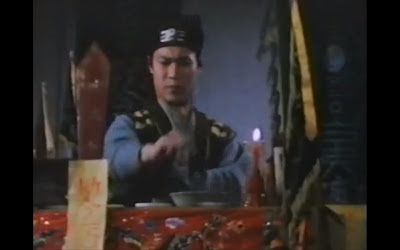 There's not much more to say about this disappointment of a movie other than 'go watch Counter Destroyer instead!'...
Posted by Chris Hewson at 9:07 AM