Well here I am with Bruno Mattei-Claudio Fragasso action feature Terminator II! Yes, it's really called that! And it's really a ripoff of James Cameron's other movie, Aliens! And it's from the director of Jaws 5!

*For those not in the know on who 'Vincent Dawn' and 'Clyde Anderson' are, explanation here.

After the opening credits, where Bruno Mattei is credited as both Vincent Dawn and J.B. Matthews (!), Terminator II-also known as Shocking Dark (actually that's it's first title, but honestly, what would you rather call it?)-opens in Venice with what I think is a news report, which is saying how poisonous seaweed is removing the oxygen from Venice's ocean...Umm, water has oxygen??...and is corroding the city's supports. The narrator/newscater/whatever says the usual 'if ths is Venice today, what will it be like tomorrow?' line. Sometime later, a poisonous cloud has made Venice a dead city.

The film cuts to the Megaforce (*stifles chuckling*), a squad of...umm...government? tough guys, who get a distress signal (containing massive overacting) from people in Venice. The people sending the signal are located in what I can only assume is a steam factory (those sure were popular in the 80's! Especially in Highlander films!). They're running like crazy from something and get split up. Two of the guys run into a strange creature, and the other, Tower, is found by a friend, Drake, who's acting crazed and strangles Tower to death. 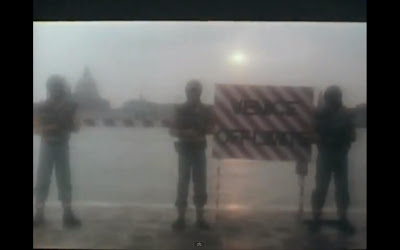 Back at Megaforce HQ, they've recieved a video transmission from Henry Raffleson, who tells the Megaforce that he and his team are facing a hideous death, and will most likely not escape. All of this Raffleson says with absolute calm in his voice! Don't worry about this underacting, the film's overacting makes up for it in spades! He talks about 'strange phenomenon' and the increasing insanity of Drake.

The Megaforce are asigned to see what's happened at the 'steam factory' (the place was supposedly meant to be a viaduct that going to try to purify Venice), and Samuel Fuller (Chris Ahrens), a member of the Tubular Corporation (bwahahaha!) is going to be accompanying them on their mission to find Raffleson's journal and scientific notes. The Megaforce complain, as does Sarah (Haven Tyler), a scientist helping with the mission (who's underacting is painful!). 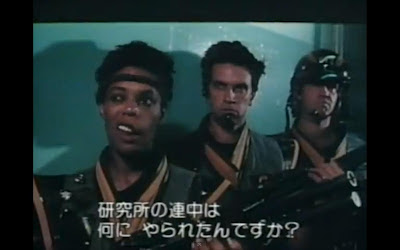 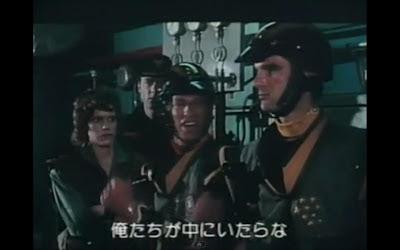 The Megaforce gear up, and are all hassled by the team-member Koster (Geretta Geretta, who gets a fun 80's line in!). After a whole scene full of funny lines and over-the-top 80's characters, the team get ready and leave for the sewers/steam factory/underground channel/secret lab/I-don't-know-what, ready to carry out their mission. 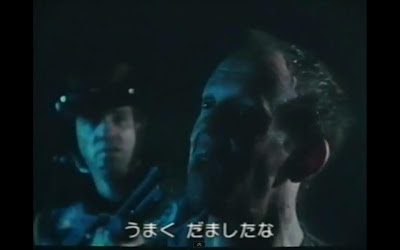 Everything's quiet until they start getting shot at. Shooting at them is the insane Drake. They manage to cacth him, and he overacts something crazy! He threatens the Megaforce, then lets out a piercing super shriek, which incapacitates everyone. He takes one of the team, Price, hostage and escapes. 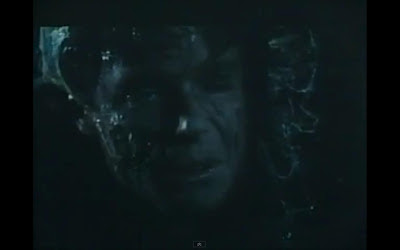 The group splits up, and Koster and Kowalski (Paul Norman Allen) go searching and find Price, stuck in a web and mutating into something. After being attacked by a mutant, they kill Price on his instructions. Another mutant attacks others from the team, and after it's dispatched, everyone groups back together.

Sarah detects multiple mutants approaching on a scanner-thingie, and the team run away and close their exit off with a bulkhead. 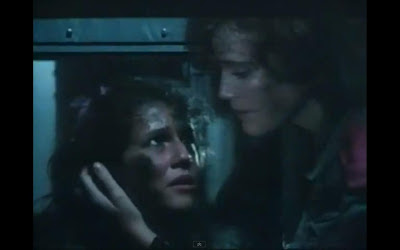 The Megaforce soon find Newt...err, Samantha Raffleson (Dominica Coulson), a survivor. They take her with them and locate Dr. Raffleson's lab, where they set up shop. Koster and Kowalski go off investigating the outer area, while Burke...er...Fuller does work on a computer. 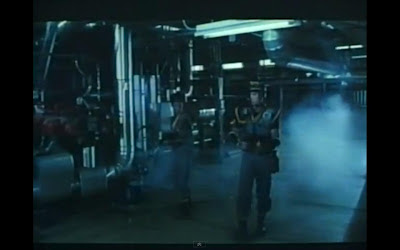 Fuller finds out what was being done in the lab, and his shocked reaction is completely monotone! "Incredible. Ingenious. What bastards. They've done it. They've done it.", he says like he's a living plank of wood! What he's found is computer DNA, that can be used for genetic and cybernetic engineering. The funniest thing about this scene other than the terrible acting (or dubbing, could be both), is that this is set in the near future, and everyone still uses floppy discs! 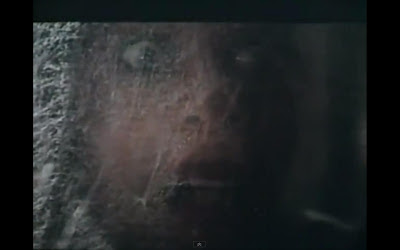 Soon enough, the mutants start attacking the team. The mutants, however, might not be the biggest threat to the surviving Megaforce-Samuel Fuller is not as human as he seems...

Terminator II is a load of fun! It's got goofy action stereotypes for characters, overacting (yay!), underacting (nnnnoooooooooooooooooooo!), and fun dialogue too-"Let's get out the KY, so we can shaft him real good!"-"Alright, ya bunch of pussies, I'm back and I'm kickin' ass!"-"Howdy stranger, make a move and we're really gonna screw your weekend, baby!".

Most of the acting is ok, with Geretta Geretta being a load of fun as Koster. On the other side of the spectrum, Haven Tyler, the lead actress is awful! Christopher Ahrens is the most monotone actor in the film, but since he turns out to be a robot, I think that's deliberate (mainly because I've seen Ahrens in a movie before, and he was a good actor).

The effects work in TII, from mutants, to explosions, is pretty good. The mutants look silly, but the fun kind of silly! 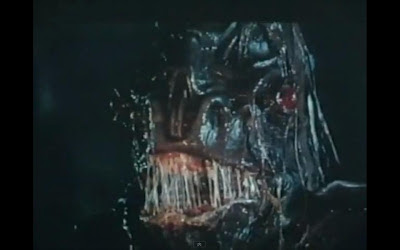 As for how TII rips off Aliens, it's been a few years since I've seen Aliens, so I didn't pick up on some little things, but I did with big ones. For one, a special ops team being sent in, along with a civilian, to a place which has lost all contact with the outside world; there's the Tubular/Weyland-Yutani Corporation, who are evil and want a specimen of the alien that killed the colony/created the mutants that killed the scientists and want to spread them across the world; the group find a lone survivor-a little girl; and there's a scene where Sarah and Samantha are locked by the film's Burke equivalent in a room with a mutant; and so on...

The film has a few problems. Probably the stupidest thing about it is that since the mutants are vulnerable to bullets, why didn't the Megaforce just shoot them when they saw them? Instead they ran away and closed bulkheads beind them! Morons! 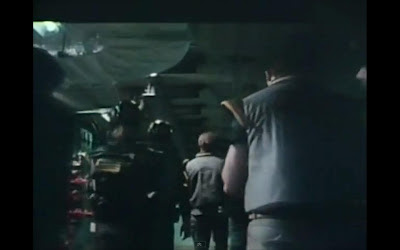 The Megaforce, despite being over-the-top stereotypical 80's action commandos, all have terrible aim, and they all pretty much die instantly when it's their time to fight! They are most certainly 80's tough guys though, which is illustrated no better than the scene where one of the team fires a shotgun one-handed with no recoil!

Despite being mainly an Aliens ripoff, Terminator II does have some elements of The Terminator, such as Fuller being an indestructible killer robot, and a 'certain other thing' that I'll mention soon... Something funny about the robot portion of the film is after Fuller is first injured by Sarah-his voice has changed from tough to squeaky! 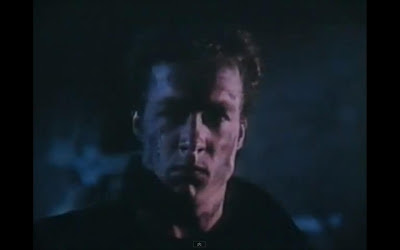 By far the craziest thing about the movie is the climax! Sarah and Samantha are running through the facility when the self destruction timer (which will not only destroy the facility, but spread the species-altering mutants all across the world) ends... ...And instead of, you know, self-destructing, the facility intercom gives another 'final warning', then another coundown starts!

By the time that countdown ends, the two women have found their way into a strange pod, and then...the film becomes crazy! The countdown ends, again, but nothing happens for some reason. Then a screen in the pod turns on and says the funniest (because of how unexpected they are, because they're said with a straight face!) words from the movie!-"Hello! Welcome to the Tubular time pod. Today we'll be travelling to the past. You have ten seconds to fasten your seatbelts. ... We wish you a pleasent time-space trip.". That's right, time-travel! Now I knew that there was time-travel in this movie, but I'd forgotten while watching it-I was thinking 'how are  Ripley and Newt going to make it out of the facility before boom-boom?', and 'are the mutants going to infect the whole world?' (to which I thought the answer would be 'yes', since this is a film written by Claudio Fragasso and Rosella Drudi! These two did not favour happy endings!), and then, suddenly, time-travel! It comes completely out of left-field! 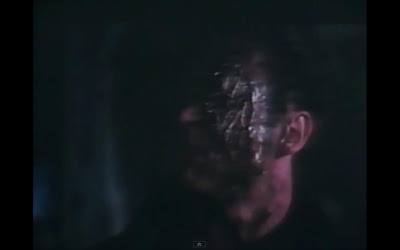 And what does the self-destruct look like, you ask? Well the exterior shots look good, but the interior ones...Well, the way Mattei pulled the effects off, it looks like the Tubular Corporation's idea of a self-destruct mechanism is gasoline and matches!

So, to finish up, Bruno Mattei's ripoff is a fun 80's action ripoff film (released too late, in the 90's, but watching it proves whch decade it was made in, without a doubt!) that I definitely recommend...If you can find it...Or if it stays on youtube for ages...It'd better, because I don't particularly enjoy having to hunt down rare Japanese VHS's of super obscure movies!...

This post is part of the The Camp and Cult Blogathon (I tried to link the Camp and Cult portion of this post's title, but it wouldn't let me, so that's down here...)...
Posted by Chris Hewson at 6:05 AM