The Camp and Cult Blogathon-The Torture Chamber of Dr. Sadism (1967)

The Torture Chamber of Dr. Sadism! That has got to be one of the best titles a movie could ever have, ever!

Originally titled The Castle of the Walking Dead,  The Torture Chamber of Dr. Sadism absolutely does not live up to its English title. Rather than a Hostel-like movie, where Christopher Lee acts like Jigsaw and SADISTICALLY TORTURES people in his CHAMBER while flaunting his DOCTORATE!, but rather it's a gothic tale of ookiness and fog, monstrous counts and haunted castles...

The movie opens sometime in the 1700's, I guess, with the execution of Count Regula (Christopher Lee), a brutal, satanic killer (with a 'imposing'  name that sounds like a line of cars! Fear the evil of Count Toyota!), who kidnapped several women and had them tortured and murdered. Regula has a golden smiley torture mask (that looks like if C3PO got a happy ending) spiked onto his face, and he's quartered by horses in the main square of the small town of Verghenstaff. 35 years later, Roger Mont Elise (Lex Barker), the son of the judge who executed Regula is in Verghenstaff, on invitation from Count Regula, as is Lilian von Brabant (Karin Dor), the daughter of a woman who helped catch Regula. 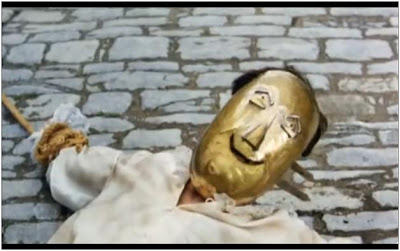 Roger goes to a small village and asks the towspeople where Andamine castle is. Everyone seems afraid and ignore him, except for one man, who tells Roger of Count Regula, and of his death, nearly four decades prior. Roger shows the man his letter of invitation from Regula, and the man warns Roger away. Roger inttends to go anyway, and he's approached by a kooky, loudmouthed piest, Fabian (Vladimir Medar), who offers to come with Roger and give directions. As the two get into a carriage, they see another one go by, heading their direction, with two women inside. 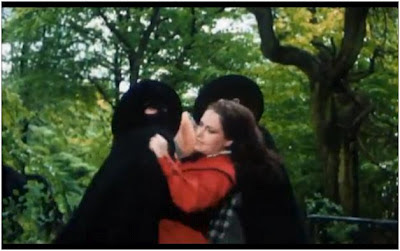 On the way, Roger's carriage catches up with the other one. He sees the carriage up ahead being attacked by a mysterious group of black-clad people, apparently robbers. Roger saves Lilian by scaring the people off and she introduces herself and her maid, Babette (Christiane Rucker) to Roger. 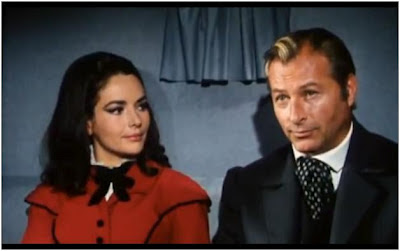 The two women come with Roger's carriage, and they head deeper into the forest. After coming across a blasted house with a mysterious man, the driver is reluctant to go any further but is forced to at gunpoint by Fabian. Come nightfall, the carriage is making its way through a dark forest, filled with hanging bodies. The driver, spooked out by them, and the fact that the bumps he's going over aren't branches (mwuhahaha!), speeds the carriage up, causing him to have a
heart attack. Roger sees what's going on and stops the carriage. After realizing that the driver is dead, he and Fabian see the bodies everywhere. While they investigate, the man from the blasted house comes onto the scene and steals the carriage, with Lilian and Babette in tow. 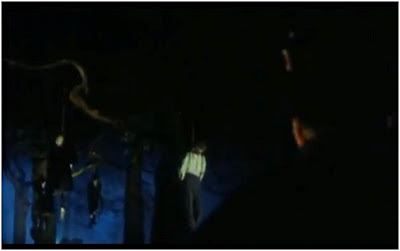 Realizing what's happened, Roger and Fabian make their way through the forest until they come across an entrance to castle Andamine (and it's a super cool entrance! it's a slab of concrete that rises up, and it has spikes all across the bottom!). They venture into the castle and encounter the man who stole the carriage. He acts cordially and shows them to Lilian, who's been drugged. 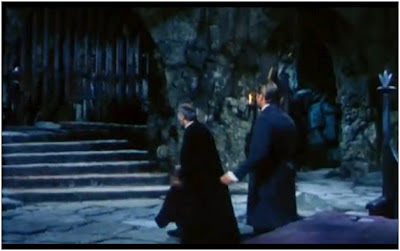 The man attempt to make Fabian unwittingly drink acid, but he is caught out. He leaves quickly and the way he goes is blocked off (by one of the many, many falling bar doors that Regula has installed in his evil lair). Roger, Fabian, and a back-to-Earth Lilian venture around the castle until they find a room where Babette is strung up on a wooden slab above a bed of spikes, with the rope supporting the slab slowly burning away. 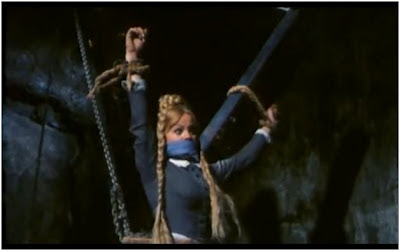 They save Babette and walk off, but are split up when Babette, scared, runs off and Fabian follows her (no, Roger and Lilian, don't bother going to her as well!). Babette bumps into the servant, who tries to attack her when Fabian shoots him. The bullets to nothing to him, and he captures Fabian, while Babette has escaped.

Soon, Roger and Lilian are caught by the man and seperated, with Roger being imprisoned in a room with a swinging pendulum blade, coming further and further down, and Lilian being forced to watch the resurrection of Count Regula... 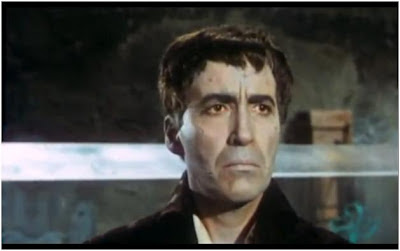 The Torture Chamber of Dr. Sadism is a fun gothic horror movie. It has very cool set design, and it has a cool atmosphere. It's never too horrific though, which is a shame, but it's also cool, because I didn't want any of the seconday main characters to die-Fabian is too fun to die, and Babette is too much of a babeYeah, I'm only saying that so I could make that joke. I'm a terrible writer... 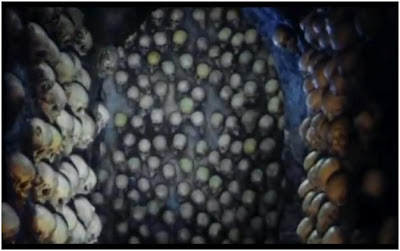 
The Torture Chamber of Dr. Sadism has an ending much happier than a film with that title deserves! The villains are destroyed, everyone lives, and they ride off into the sunset while happy muzak plays-The End!


The film's score is ok, but it's never great, or spine-tingling.

The acting is all decent, nothing special, save for Vladimir Medar as 'Father' Fabian and Christopher Lee! Medar is over the top kooky, and Christopher Lee is cool as usual as the film's villain, even if he doesn't get a massive amount of screentime. 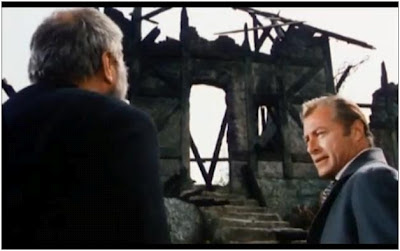 The character of Roger does have some stupid moments though, like when he's in the pendulum trap. The pendulum is close to him, and he manages to get a rock from the ground, but instead of trying to destroy the ropes binding him, he throws the rock at he pendulum! Given the angle he's on, he'll be lucky if he can throw anything very well, let alone hit a moving object! I have no idea what he was expecting the rock to do, but what it does is make the pendulum veer away, and it slices through Roger's binds...And nearly his belly! Well it worked at least...

So in closing, The Torture Chamber of Dr. Sadism isn't perfect, but it's definitely worth watching!...
Posted by Chris Hewson at 6:26 AM