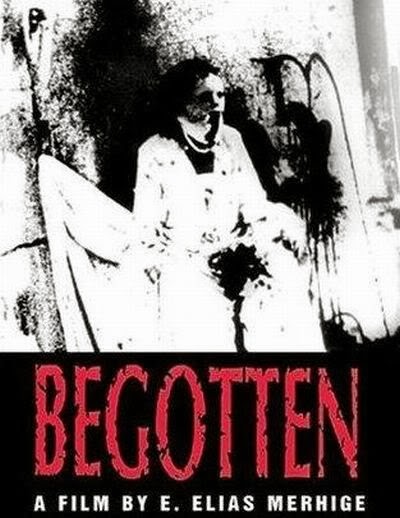 Begotten. A surreal experimental horror arthouse-type movie by Shadow of the Vampire director E. Elias Merhige, released in 1990 to a confused underground scene, who seemed to take the movie in, despite it being terrible. But hey, that's all opinion. There's almost nothing to this 72 minute movie, so let's start right away!

The movie opens with a heavily bandaged man (Brian Salzberg) who the movie says is God. 'God' disembowels himself with a straight razor, and following that, a woman appears, then does the deed with the corpse of 'God' and sticks his...man-juice in her...Whoah, Jane Foster really took Thor's untimely death hard, didn't she! 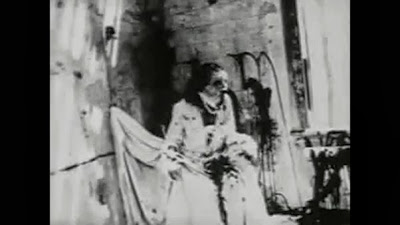 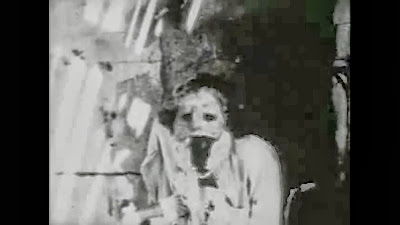 The woman, 'Mother Earth' (Donna Dempsey) then becomes pregnant, and gives birth to a strange looking, pulsating, constantly vomiting adult male, 'Son of Earth-Flesh on Bone' (Stephen Charles Barry) who is beset upon by a gang of murderous people...

First things first, the visuals. The film was edited heavily in post-production, which involved Merhige and co. having every frame rephotographed (whatever that means), among other things, giving Begotten a surreal look. Surreal, not good!

Ughhhh! When will arthouse films learn that black-and-white doesn't work for them!...Ok, that's not strictly true. It works for many (Singapore Sling, for example), but I've seen plenty where the black-and-white is a hindrance! Take Tetsuo: The Iron Man. In that film, I could barely tell what the hell was even happening, because along with that movie's cluttered visuals, the black-and-white made it impossible to make anything out! Sometime black-and-white enhances the visuals, but other times, it completely sucks out all life from the film! Such is the case for Begotten, not only because of the blank colour palette, but because of the super-grainy look (the screenshots I took are among the very few parts that you can actually make out). It looks worse than my public domain Charles Bronson DVD's, and it was a deliberate editing move!? At least Tetsuo: The Iron Man was in good quality! 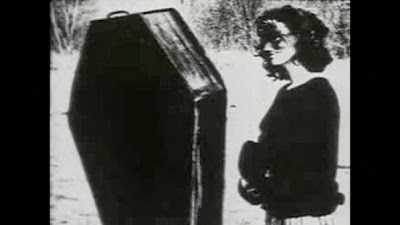 Of course, the movie IS pretentious as all hell. The movie opens with a bandaged man committing suicide with a straight razor, which is CLEARLY meant to symbolize that this man is God, and he is killing himself to spread his essence all over the world, creating new life!...Yeah righ, and our tears apparently help the flowers grow, Mr. Merhige! 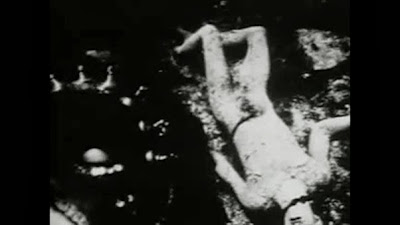 Two can play at this game! When 'God' is disemboweling himself, it looks like the word 'tire' is written in the wall on blood. This is CLEARLY meant to symbolise car tires. Car tires are made of rubber, and rubber can be used to make gloves, and murderers wear gloves as to not leave fingerprints, and fingerprints are the eyes of the window to the soul, and therefore are the most important thing in humankind. Such knowledge is tiring knowledge to know. You see how the circle of life comes around? YOU SEE?! 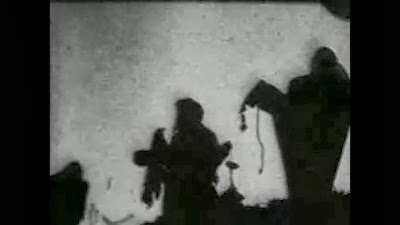 I'm not just gonna sit here and insult E. Elias Merhige though, because I actually can see where he's coming from with this plot, and I do somewhat understand the symbolism. The problem is that you need to have read what the film about prior to watching it. Without having that knowledge beforehand, the movie is pretty much a fake snuff film. Unless Merhige intended the movie to be a meaningful slate from which multiple legit meanings could be taken from. Though if that were the case, I would prefer to be able to SEE what I'm watching, or does the super-film grain photo effect symbolize the ever-changing will of the gods compared to the feeble eyesight of us mere human vessels. "We saw the Nephilim there. We seemed like grasshoppers in our own eyes, and we looked the same to them". 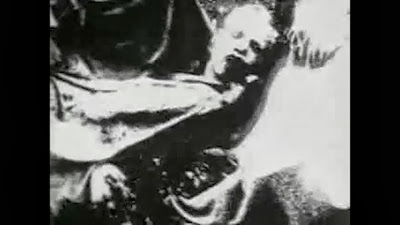 The film's plot is nonexistent, and there's no dialogue. Just ambient noise, and the sound of chirping crickets.

Begotten is well known for being disturbing, but I didn't find it so at all. That doesn't mean the film isn't disturbing though. I've watched a film before where a woman graphically masturbated with human offal, then rode a guy while electrotorturing him before (Singapore Sling) and didn't even flinch, or gasp. I simply can't be disturbed by any film out there.

This film does have its fans, and I'm not going to just leave you here with my negative review. Here are links to two positive Begotten reviews, one from Maynard, from Maynard Morrissey's Horror Movie Diary.

So, to finish, don't watch this film unless you want to be bored to tears, or are majoring in Bible studies and need to do a report on a theological film of your choosing. If you want to see a movie of this type that you might actually like, then watch Singapore Sling instead! 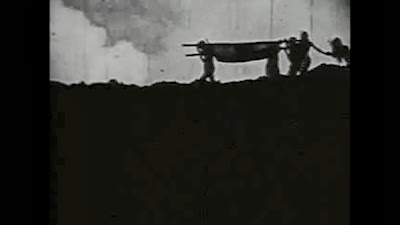 So, does anyone know of any films like Begotten? I'm seriously asking, because I love watching these types of movies! I'm not just some close-minded jerkoff who calls anything symbolic or artistic a piece of crock, and it genuinely hurts me seeing films of this type be really poor! I'd definitely like to see many more films of this kind!
Posted by Chris Hewson at 9:28 AM