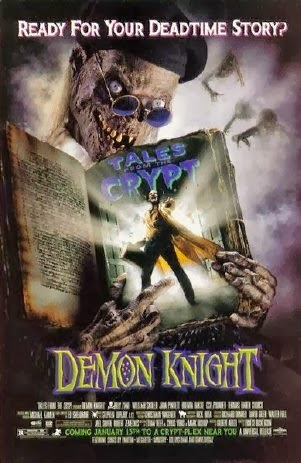 I'm going to open with a statement that I can only assume Emily of The Deadly Dolls House of Horror Nonsense would find controversial...Here goes.
...
I like Tales from the Crypt's Bordello of Blood more than I do Demon Knight!

That's not to say I didn't like Demon Knight, of course not. It's great fun!

Tales from the Crypt's Demon Knight is a 1995 horror flick starring Billy Zane (well, not really, but face it, it's HIS movie!) as The Collector, a demon hellbent* on getting the last of seven mystical keys, which will enable him to destroy the world as we know it, and unleash a world of darkness. In a small town, a mysterious man named Brayker has stopped at a motel, to evade the Collector, who's hot on his heels. Soon, the hotel is surrounded by demons, and the only thing keeping them at bay is a strange liquid that Brayker keeps inside the key, and not for long...

The plot to Demon Knight is pretty standard stuff. Fun stuff though. It follows the 'all in one night' formula, which I normally dig, but not here! I like those types of movies because of how much can happen in a single night (i.e. Vice Squad, Brad Jone's Midnight Heat, a few of my own works, etc.), but with those movies, they usually go all over the place, but Demon Knight spends its whole running time in a motel. The movie is never boring, and it never drags, it's just not my kind of plot. I think that's why I like Bordello of Blood more, because it's not set in just one location for ninety minutes.

The acting is all passable. None of it's bad, but nothing special either. Except of course, for Billy Zane! Billy Zane steals every scene he's in! He's so gloriously over the top, with fun dialogue, and a super-cool demeanor. As for the Cryptkeeper though, God, he's annoying! Thankfully he's only in the film for about two minutes, tops (which actually kinda sucks, given this is a Tales from the Crypt movie).

The effects-practical, unlike the movies of today-are great stuff! Pretty silly at times, but still cool! Definitely better than what was supposedly originally planned-just an army of killer guys in suits. There is one thing about the film that looks so fake though-the boobs! For the most part, all the nude boobs in the movie (which isn't many) look very fake. I remember Bordello of Blood having this same problem. *sigh*

There are a couple of stupid things about the movie. For one, a character (played by CCH Pounder [what a name!] from Warehouse 13!) gets their arm ripped off, and after only a few minutes, is totally fine! I guess some flimsy bandaging, and not enough vodka to get you drunk will literally remove all pain, and urgency for medical care that a torn-off arm would usually pose!

Another part is where said character gives her life to save the others with a grenade belt (not really a spoiler, given she's missing an arm while stuck in a motel-she's probably gonna go join the choir invisible pretty soon anyway). The stupid bit is when, for no reason, a perfectly fine character stays behind to die with her!

That's all I can say about Demon Knight. It's a fine horror flick, and I definitely recommend it!
Posted by Chris Hewson at 8:40 AM