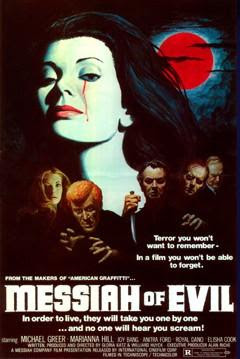 There aren't that many Lovecraftian films, best to my knowledge. There's a few, like From Beyond, the silent Call of Cthulhu film made a few years ago, Dagon, the Dunwich Horror flick starring Al from Quantum Leap with a silly moustache, and...that's pretty much it. There's only about fifteen more at the very most.

My point is, in 1973, a very Lovecraftian tale was released. Messiah of Evil, one of the most underrated horror flicks out there...

Messiah of Evil is about a woman named Arletty (Marianna Hill). Arletty is on her way to Point Dune, a coastal town, to visit her father. The two frequently communicated via letter, but after the letters started getting strange, they abruptly stopped, with him warning Arletty to not come looking for him. So naturally, she heads off to Point Dune, looking for him. I suppose I can't call Arletty stupid-after all, she doesn't know she's in a horror film. As far as she knows, her father could simply be mentally ill or something.

She arrives at her father's house, which is full of strange paintings, and she doesn't find her father anywhere. The next day, Arletty goes into town, and after asking around about her father, finds out that three other people have been doing the same, and they're staying at a local motel. She goes there, and finds the three-Thom (Michal Greer), an investigator of odd things, and his two lady friends (Joy Bang and Anitra Hill). Thom (what a horrid way to spell Tom!) is in the middle of talking with Charlie (Elisha Cook Jr.) an old drunk, who talks about the blood moon, an eerie occurrence from Point Dune's past. When the moon went blood red, everyone in the town became inhuman and violent.


Messiah of Evil is one of my favourite horror films! It's an extremely eerie sit, and is a pretty unique zombie movie.

The film has a really off feel, and it does wonders. The music is fine, and I really like the opening-ending song! Some hate it, and find it grating, and those who have seen the recent super special edition DVD of the film much prefer the original music for the opening (Which I have no idea what is), but I like the current music. It sets the tone for the film wonderfully, and its lyrics directly pertain to the film, so if it is a replacement song, it definitely does a good job of fitting in!

There isn't much story, and that doesn't matter. What's there is fine, and the movie is good without an intricate storyline.

The look of the film is nice, and the artworks in Arletty's father's house are suitably creepy. The effects are also pretty good.

The acting is all good. The standout is definitely Elisha Cook Jr. in his small role. He may be playing the same role he played in what I can only imagine is every other film in his career, but Charlie the drunk regaling his father's story is one of the film's best scenes, in my opinion.

Of course, the very best scenes are two special death scenes! The first takes place in a movie theater, where one of Thom's female friends is sitting, watching the movie. As the movie goes on, the zompire townsfolk slowly start filling up the largely empty theater. That, and what comes afterwards, is filmed perfectly. The next great death scene is when the othe female friend goes into a supermarket. Both scenes are creepy, well-filmed, and definitely make this film a step above the rest!

Messiah of Evil's biggest problem is that it has too much 'tell', not enough 'show'. It's effective for the scene where Charlie talks about the blood moon, and for when a woman is talking to Thom about what happened to her family, but it is TOTALLY unwarranted for the ending! The reason for this is that the film's backers pulled out before an ending could be shot, so the film doesn't have a climax, just Arletty talking about what's happening. This was of course unavoidable, but it still really irks me.

Another big problem is the character of Arletty-She does next to nothing in this movie! She just exists!

There's also one stupid moment where one of the women wants to leave the town, and hitches a ride...with the zompire albino. The zompire's car is full of bodies, which the woman sees, yet she still gets in the car. And the guy has to eat a rat whole before she wants to leave. What, were the dead bodies not enough of a hint for you, lady?!

I don't like depressing Lovecraftian endings, not at all. I'd much prefer it if Arletty actually did something and roasted all the ghouls in Point Dune up, then kicked the crap outta the Dark Stranger until he lay bleeding in a pile of his own blood! Well it's not too far of a stretch to assume that could've happened-when she sets her ghoul father on fire, she only has a small flame on a bit of wood, but it immediately sets him alight like he's covered in napalm! And Arletty started gagging up insects and didn't feel cuts, so maybe she could also have super zombie powers. Come on Arletty, fuck these zompires up!

Some call Messiah of Evil a phantasmagoric nightmare, and they couldn't be more right! I asolutely recommend this movie to anyone who considers themself a horror fan! And if you've got a scaredy-cat friend, don't show them some random dead teenager flick, show them a real creeping dread film like Messiah of Evil...

*For now, this review is image-less. I'll rectify this tomorrow. The reason is that I've been super busy, and as of writing this, it's nearly midnight.
Posted by Chris Hewson at 9:26 AM