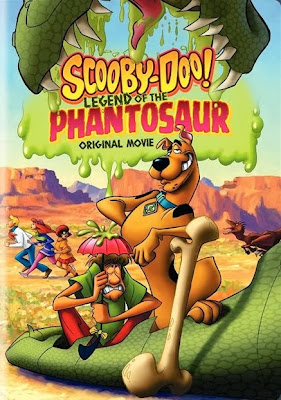 Well this is a change! I went from reviewing experimental arthouse horror, and a gory Tale from the Crypt flick, to looking at a Scooby Doo film of all things!

Scooby Doo: Legend of the Phantosaur was on tv, and given that I kinda sorta dig anything Scooby Doo related, I decided to watch it, expecting a mediocre sit, and I was pleasantly surprised!...

Legend of the Phantosaur opens with the gang doing their usual stuff-that is, chasing 'ghosts' in a haunted house. While the ne'er-do-wells are caught, Shaggy becomes so cripplingly scared that he shrieks constantly for three hours (Why?! He always gets scared, but screaming for three hours on end? Did the 'ghosts' rape him or something?!) and he's brought to a doctor, who diagnoses Shaggy with a condition I'm not even going to try to spell. The doctor demands that Shaggy be as far away from anything scary as possible, so the gang head off to an archeological dig in a small town. Everything goes well, until the mysterious Phantosaur rears it's ravenous head...


At 77 minutes, Legend of the Phantosaur moves at a very brisk pace, and most definitely does not overstay its welcome. One huge positive to the film is how crazy unpredictable it is! It goes one direction for a while, then just as you get comfortable, it suddenly 180's into a totally different direction. Then it does it again! It's awesome!

The characters are all fun, the bikers especially so. They were a fine addition to the plot, and Tex, the leader is a load of fun! A tough badass with swagger, and nonchalance towards his dislike for ghostly dinosaurs...

The film is definitely funny, and it has some fun dialogue all over too:
Velma-"What would Velociraptors want with holographic equipment?"

Tex-"If there's one thing I can't stand, it's ghost dinosaurs!"

The voice acting is all fine stuff, even Mathew Lillard. The guy may be skin-peelingly annoying in about half the things he's in, but the guy is a fine Shaggy Rogers!

If there is a problem I can find with the movie, it's that it doesn't to a good job with the mystery of what's going on (or should I say, all the things that are going on). It detracts a bit, but it's not a major issue. Also, the opening credits theme is VERY annoying! Chances are though, you'll forget all about it once the movie starts proper. I did. I only remembered its existence about four hours after I finished the movie.

So, to finish, I definitely recommend Scooby Doo: Legend of the Phantosaur!...Unless you hate all things Scooby Doo, that is...
Posted by Chris Hewson at 8:09 AM