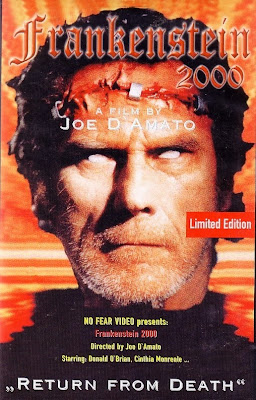 Holy yikes, this is a Joe D'Amato film that's actually good! If you've ever seen any given D'Amato film that isn't Beyond the Darkness or Anthropophagus, then that may come as a system-shaker to you!

Ok, good may be too strong a word for Return from Death aka Frankenstein 2000. You'll see why soon...

'Frankenstein 2000'  is about Georgia (Cinzia Monreale-What a name!), a woman living in a small Austrian town (or suburb, it's kinda sketchy), where bad things start happening. She's violently harassed by a group of thugs at one point, but just when they're about to rape her, her friend Rick, (Donald O'Brien), a hulking but mentally challenged (I think-again, it's sketchy) man. She's fine, for now, but later, she's attacked by the same three thugs, and is hit violently, sending her into a coma. The corrupt town officials, wanting to cover up the crime for reasons that somewhat elude the screenwriter, frame the also badly injured Rick for the attack, and eventually murder him, under the guise of suicide. What they don't see coming though, is Georgia's previously mostly latent psychic powers coming to a forefront and bringing Rick back, with an unstoppable vengeance...

The film's proper title (Frankenstein 2000 is under it in brackets in the opening credits) is Return from Death, and that's a much more fitting title, not just because it makes sense in context, but because it doesn't leave you expecting Frankenstein or his creator to show up for over half the movie.

Like I said, things don't start rolling until an hour through the movie. If this was an actual Frankenstein movie, that'd be a HUGE problem, but in this case, it's smaller. It's still a big flaw, but since this isn't actually a Frankenstein movie, it's not like if Boris Karloff only showed up in the last five minutes of the 30's flick.

But you know what, this film's plot is still crippled! If it was just a drama, then I'd be more fine with how much happens in the first hour, because I wouldn't be anxiously waiting for the resurrection and murder scenes. The film could have continued on from the corruption of this town, the framing of Rick, and investigations by Thomas (Georgia's husband) into the true cause of his wife's state, then it would have ended with Rick being rescued before the crooked cops can kill him, and he ends up exonerated. That could 've made for a decent crime-drama, but unfortunately the movie doesn't follow a route like that, and it fails.

As for the acting, It's ok, I guess. The film is dubbed, so I can't really tell. As for the dub acting however, get the Razzie awards and give them to these guys, because all of the voice acting in this film wil hurt your ears!

Donald O'Brien is an imposing enough figure to make a good Frankenstein's monster (or random living dead man in this film's case), but for some reason, I don't know what, he just doesn't click. His rampage is pretty cool though, and he's pretty badass. Despite being undead, he still looks human, and the only make-up he gets is the stapled autopsy gash on his head. I don't know if his still-human looks are good or bad for the film-I can think of reasons for both sides.

There aren't much effects, and some of what's on display is terrible! But it's the kind of terrible which makes you laugh. The scene in question involves a head getting crushed. 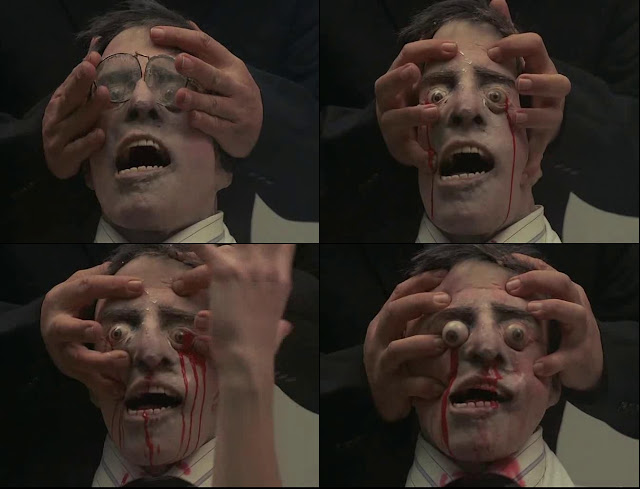 *These fine images are from Maynard Morrissey's review of this film.

The death scenes are pretty groovy. The head crushing scene is cool, despite, or because of, the terrible effects, and there's one GREAT death scene where Rick pulls out an electrical cable from the ground and whips it around one of the villains, electrocuting him. There's also a death scene that awesomely screams of overkill, where Rick literally uproots a power pole to kill the two crooked cops!

The movie has one hugely illogical moment. When Georgia is in a coma, the doctors try to use brain stimulation (or something like that) to help wake her up, and when that fails, they decide that brain stimulation, plus the presence of the guy who put her in a coma and tried to rape her (well, he is as far as the doctors know) will shock Georgia enough to snap her out of the coma. What the hell?! Rick is a huge guy, who 'savagely attacked' Georgia, and they put him in the same room with her, with no security whatsoever!

Also, how is undead Rick able to hunt down the villains of the film, including the ones he didn't even know about? Maybe comatose Georgia is psychically pinpointing their locations, but how about the ones she didn't know about? Again, she's probably reading the minds of the villains, but if she can do all that, how come she can't wake up? That's only a tiny nitpsick though.

What isn't a small nitpick though, is why Rick went after Thomas with intent to kill him. Surely if Georgia was able to mentally supply Rick with that much info, then she'd be able to insist that he should pretty-please not murder her husband!

I also didn't like how Thomas ultimately defeats undead Rick, given that it was a big fuck-you to his wife, although given the final shot of the movie, I thought the movie ended on a fine enough note.

Speaking of the ending, I really liked when Georgia's son came in on undead Rick trying to kill Thomas. It was a great callback to an earlier revelation about the kid's previous father.

Onto other things, the score is decent enough albeit a bit repetitive in places. Also, the quality for this film was REALLY good! If you've ever seen a Joe D'Amato film, then you know what I mean. Plenty of his films are grainy, and of low-quality, so it's always a joy (or rather, a horror, depending on which movie it is) to see a movie of his in High Definition!

I don't exactly recomend Return from Death, but if you want to watch it, go ahead, I won't try to sway you against it.

To finish, If you want to watch something involving murder and the locale of Austria that isn't super drawn-out, then go watch Stockinger!...Eh? Why the confused looks? Oh, yeah, no-one outside of Australia or Austria knows what that is..