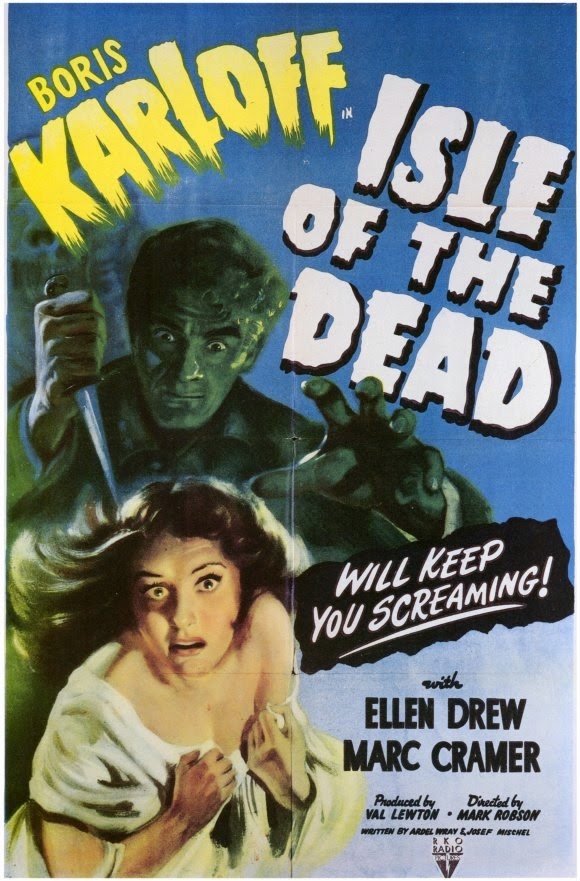 Ah, it's been a while since I've seen a Boris Karloff film!...Well if you wanna get technical about it, it's been ten hours, but prior to The Raven, I haven't seen a Karloff film in some time. Too long! That's something I must rectify!

In 1912 era Greece, during the Balkan wars, an American journalist is doing a piece, and talking with a tough-as-nails military general Nikolas Pherides (Boris Karloff). The two sail to a nearby island to pay respects to Pherides' dead wife, but soon realize that septicemic plague has struck the island. The general quarantines the island, firmly demanding that no-one may leave. Only one person is allowed to come to the island-A doctor.

With the doctor's death a short time later, the general's faith in rationality is shaken, and after being influenced by Kyra, a superstitious old woman, he takes to believing the old tales he once derided. He soon starts to think Thea, a kind young woman, is a malignant spirit, and to get rid of the plague, he must destroy her...

For the first two acts, Isle of the Dead is a very good film! For a start, it's very well-directed, and has great imagery. Its setup is good, and not only is Boris Karloff's character well-rounded, but all the other characters are too, even ones who die at the 30 minute point! It's one thing for a film from this time period to have one three-dimensional character, but for its whole cast to be is damn impressive!

The acting in this movie is very good, with the obvious standout being Boris KARLOFF, who's fantastic in what's basically a straight role for him. There's a very good reason why the man's a horror icon, and it's not just because he played a lot of monsters.

Unfortunately, here's when we start to get to the bad. The final twenty minutes of Isle of the Dead are badly paced, and the story completely goes off the rails, completely botching two character arcs, capping it off with the 1940's equivalent of an ADR rush job doing some 'moral' closing line, as the Hays Code was wont to do. At least the Code ensured that the psycho bitch Kyra dies horribly!

The first character to have their arc botched is Miss St. Aubyn. She's cataleptic-Wont to fall into deep trances which seem like death. She's been afraid of this her whole life, and being buried alive is a chilling possible reality for her. However, she eventually loses her fear, comes to terms with death, and is at peace for a long while, until she dies of sickness, and the remaining characters, knowing of her condition, even do the requisite tests to make sure she's really dead...But it turns out she's not dead, and is entombed alive! Well fuck you, movie! Worse still, she goes pretty trident-crazy afterwards, a role I was sure Boris freakin' Karloff would play!

Now, while I am glad that Karloff's character didn't go crazy and kill-crazy (unlike what the poster would have you believe), as he was a likeable character, and such a downward spiral would be pretty depressing, I also feel that's what should have happened, as 1, that's what was being set up, and 2, this is apparently a horror film after all, so something horrific has got to happen at some point.

One last thing to note is this film's genre-Despite what everything seems to class it as, it's not a horror film. For the majority of its running time, it's more of a drama, and only in the last five minutes does anything even remotely horrific happen. The film has a sombre tone of unease, and accepting death, but it's never ghastly.

Isle of the Dead is a very flawed movie, but it also has some very good qualities, so I do recommend it, especially for the great performance from the fantastic Karloff the Uncanny!...
Posted by Chris Hewson at 9:49 AM