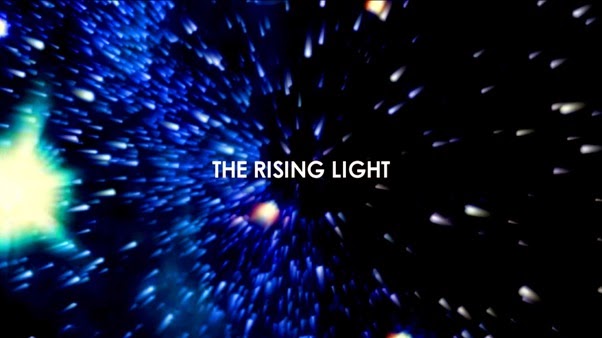 Would it be bad form of me to deliberately seek out more works of newcomer indie filmmaker Ansel Faraj knowing I'll likely loathe them? Nah, probably not. After all, if the guy's remaining filmography is as bad as his dreadful Doctor Mabuse movies, then they have whatever harsh things I can say coming! Granted, I hope the rest of his films are good, regardless of my feelings towards the schmuck (for giving the Dr. Mabuse franchise a severe compound fracture, that's the kindest thing I can call him), but I'm wary all the same. So what do I have to say for his 2013 effort The Rising Light?...

Daniel, the son of a mystic star, has been sent on a mission to Earth to give a silver 'gift' to 'The Dreamer' in order to save mankind. With only two days to live, Daniel must act quickly to find the Dreamer and prevent eldritch evils from crossing over into our world. Unfortunately, while he thought he found help in the form of a man named Alex, he's really no comrade at all to Daniel, and his intentions are in no way noble... 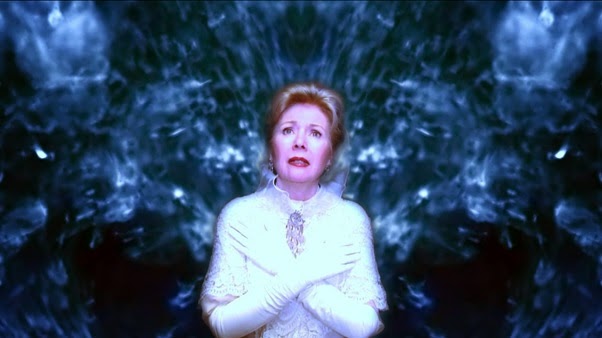 The Rising Light is a zero-budget sci-fi 'road movie', which is to say that as much as Faraj says this is a road movie, it really isn't in any shape or form, as there's little traveling, on-road or otherwise, and the lead is only briefly with a road-trip buddy before he's abandoned and betrayed by him. The plot is a sci-fi fable, and at first I was afraid that this would be set entirely in woodland, and a couple of tourist attractions, with only the actors' word for it that this is meant to be science fiction, but whether it be nifty locations, or horrid CGI green screens, The Rising Light actually does go to the stars! Thankfully, while these locations are both fleeting, and absurdly fake, respectively, at least they're here. If The Rising Light has one positive, it's that it doesn't pull a rock and roll space patrol.

A lot of filming in this movie is done in front of green screens, even though these are of real, easily-accessible locations (I guess the costs of filming permits are to blame in this case, although maybe it was just to help with the CGI). In due part because of this, I take issue with the 'On location' credits listing at the end. At your studio is not filming at location, just as much as shooting in front of a green screen facsimile of a place doesn't count! 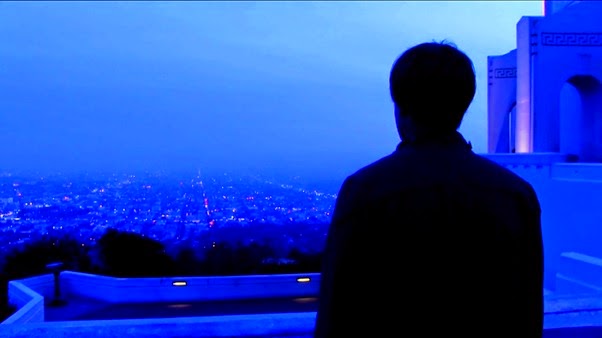 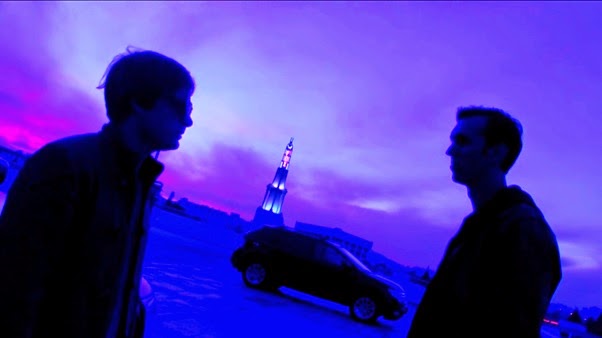 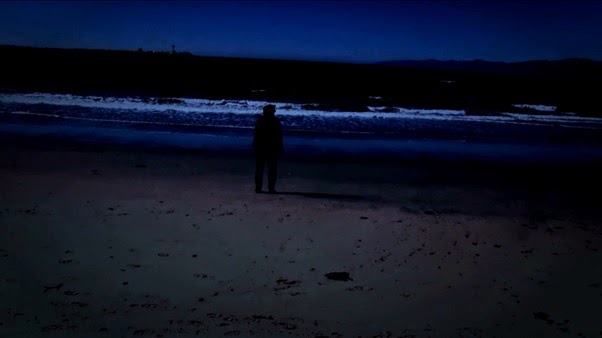 This film's plot is pretty bare, and extremely unexplored at only 52 minutes long. According to the official Hollinsworth Productions summary, The Rising Light "...blends 50's sci-fi with existential themes, the exploration of an outsider, and a study of loss and failure". None of that came across to me. There seems to be absolutely nothing of 1950's sci-fi (though the effects are on par with Robot Monster, but I'm sure that's not what Ansel Faraj had in mind by that summary's meaning), and as for the themes, if they are here and were too subtle for me to understand, they're not well-crafted, and should have played deeper into the plot, and not be so darn vague and underutilized.

The dialogue here is stilted and so is the acting! Neither Nathan Wilson or Derek Mobraaten are very capable actors, with Wilson being particularly bad! He is in serious need of a DVD of Starman, so he can watch a real actor do fantastically at playing an emotionally alien alien without being wooden. Of course, that's if I'm not being too generous by assuming that he's intentionally playing such a role. He could just be that bad of an actor, and Ansel Faraj is that bad of a director that he likely doesn't even notice! His direction didn't seem to do any of his actors any favours in his Mabuse movies! 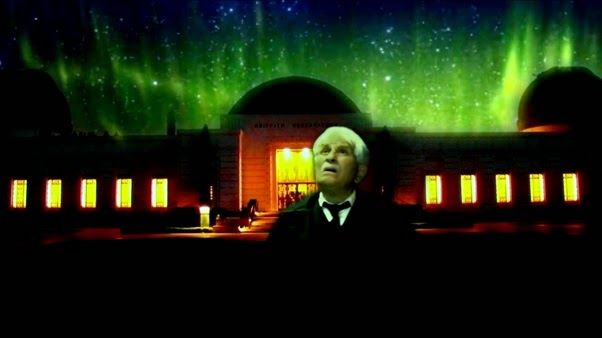 Linden Chiles (R.I.P.) is pretty decent, and certainly the best actor in the movie, while Kathryn Leigh Scott is also good. As for John C. Smith, he's unfortunately continuing his career trend of being utterly wasted by Ansel Faraj, which is a shame, as he's a fun actor, and he's an Aussie, which is always cool seeing in genre films.

The writing here is pretty meh. We get lines both hilariously bad, and just plain grammatically incorrect, from "You can't trust anyone in life. Even in outer space, they'll stab you in the back.", to "You have powers beyond no-one!" Err, you mean anyone, Ansel?

The main character of Daniel is both boring and stupid. When briefed on his mission, he's told to be very careful about who he trusts and reveals his true self to...and the very first person he meets on Earth, he instantly spills the beans to! Dumbass!  He even realizes his mistake, yet continues to make it! And of course, this turns out to be a bad mistake! The remaining characters are all pretty bland and/or unexplored. 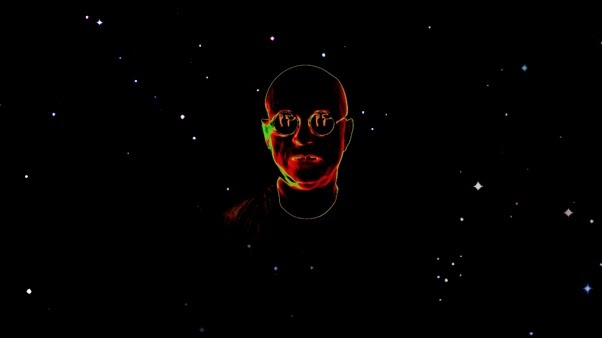 Ansel Faraj's direction is ok, but the editing in the chase scene at the end is terrible, and there are many scenes that are crazy overexposed! I took a screenshot of the sky at one point, and is was so pure blindingly white that when I pasted the image to both MS Word, and Paint, it literally perfectly blended in to the white of the pages, to the point where I wasn't sure at first if I'd hit paste properly!

The effects are not good. The majority of effects are the green screen backgrounds, but there are some different ones in other parts, such as the sometimes-negative look of the villain, and other stuff. The only practical work is the make-up for a particular character at the end. Particularly galling is a claim I read by the creators that this film has zero CGI. Uhhhhhhhhhh... 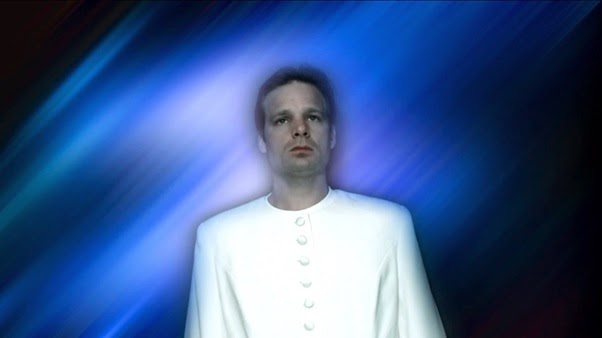 The score, largely (or entirely) made up of archive music, is decent, and the main theme is quite nice, and softly beautiful!...The first goddamn time anyway! Thankfully it doesn't repeat too much.

Overall, The Rising Light was neither terrible, nor particularly boring. It's not good, but it's not dreadful either, in part due to the fact that Ansel Faraj hasn't seen fit to butcher an existing franchise this time round. I don't recommend it, but if you have time to kill, and for some reason don't feel like watching a real movie (that is to say, a good one, particularly with more of a real plot than this), then I guess you could stand to give it a watch.

To finish, I am glad I sought this movie out. After all, it gave me the opportunity to say "I get it, he's fucking human bigfoot in the negative zone. Do something!", and really, is that not a victory of sorts?... 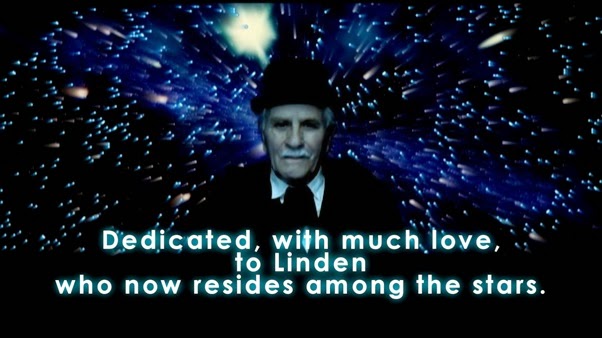