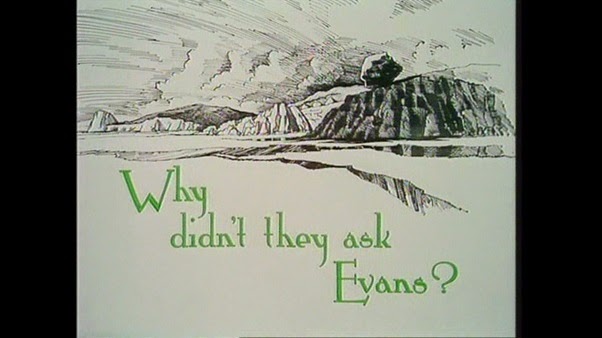 It's generally a good rule of thumb to not adapt novels literally when making movie adaptations, because they're two very different mediums. For example, if you translate every single line of dialogue from a simple 180-page book to the screen, you end with a three hour long movie! The example in question today is Why Didn't They Ask Evans, an adaptation of an Agatha Christie book...

Bobby Jones, a young man in the Welsh town of Marchbolt, comes across a near-dead man, who utters cryptic last words to Bobby-'Why didn't they ask Evans?'. Bobby believes the man's death to be an accident, but events after the inquest make him suspicious, such as a replaced photo. Originally, a photo of a beautiful woman was in the dead man's pocket, but after Bobby left watching the body to another man-Roger Bassington-Ffrench, the photo was replaced by one of a woman named Amelia Cayman, who, along with her husband, shows up at the dead man's inquest, claiming he's her brother. Bobby, and his friend Lady Frances 'Frankie' Derwent realize the Caymans are lying, especially after an attempt on Bobby's life after he send them a letter detailing the dead man's last words. The two sleuths start investigating Roger Bassington-Ffrench, and soon uncover a large conspiracy... 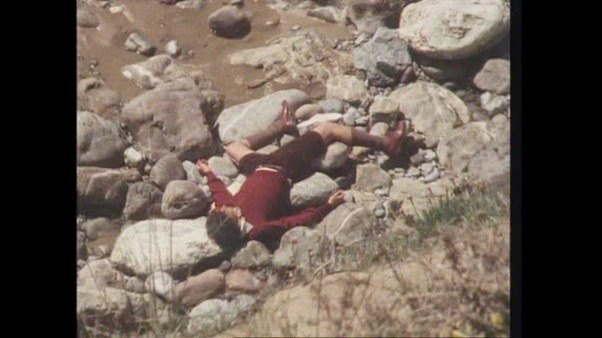 This is a largely faithful adaptation of the book, although it rearranges certain lines of dialogue, and changes certain conversations up to include bits of the prose that weren't verbalized by the characters. The finale is also altered, as a letter in the book is an in-person moment. This is a good decision, as it fits better with the TV format than the book's version of the scene would. As an adaptation, this is quite good, but there are two problems dragging it down. The first being that the book's plot itself has serious problems, which carry over, and the second...THE RUNNING TIME!

Why Didn't They Ask Evans is three hours long, and it really, really doesn't need to be!
There are numerous scenes that could have easily been trimmed. And I'm not even talking about scenes with dialogue! There are a lot of scenes where the camera is just aimlessly surveying its surroundings, or characters are taking forever in walking/sneaking around! Now these particular scenes aren't badly paced on their own, but as part of a bloated three hour monstrosity, they'll make you yell at the screen! 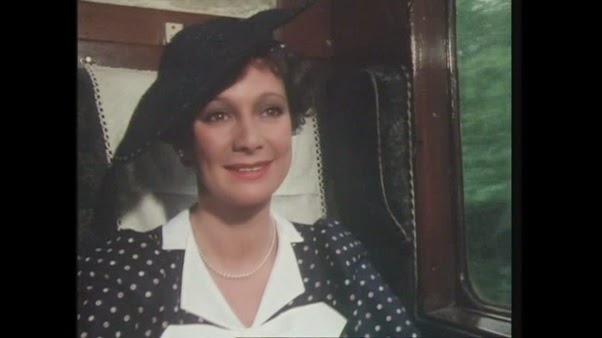 Onto the plot. It has some pretty sizeable issues! The first is that the two leads keep going after their presumed suspect, and never go to the obvious ones! Sure, they investigate the character Dr. Nicholson, eventually, but they don't investigate the Caymans until well past the 90 minute mark! The Cayman's are heavily tied into this case, as it's their photo in the dead man's jacket, they lied about his identity at the inquest, and tried to murder Bobby. Despite knowing all of this, Bobby and Frankie seem determined to believe Roger Bassington-Ffrench is the culprit, even though he's innocent in every way!...Well, except in the respect that he turns out to actually be guilty, but as far as the two sleuths knew,  there was extremely little, if anything, tying him to the murder. Then there's the John Savage part of the case, which they also should've been investigating way sooner than they actually did!

The mystery here isn't that great (which is partially why I had no compunction with spoiling Roger's role as a bad guy. That and the monstrous running time.). It's good when the characters finally get around to learning something (Frankie's visit to her lawyer, for example), but the majority of plot is them dicking around at the Bassington-Ffrench's learning nothing but red herrings! 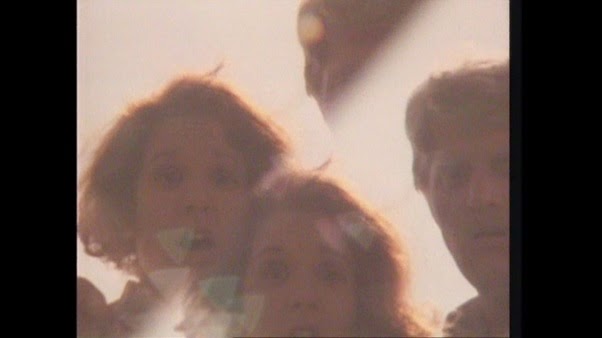 One final writing problem is a small one, and not even all that noticeable in this adaptation, as it's a movie, but it irks me all the same-The name Bassington-Ffrench! Yes, it really has two F's! That's Fucking Fucked!

The main two characters are amusing, even if they do wear out their welcome a tad in the 185 minute running time.

Other characters are not so lucky. After the death of 'a certain character', Sylvia Bassington-Ffrench drops out of the movie entirely! There's an occasional mention to her, and an offhand reference to an offscreen character resolution, but that's it.

Two particular minor characters have their roles expanded on from the book, which is good for the respective reasons. The first character in question is played by John Gielgud, even though he only has barely over two scenes in the book. I've no idea why they hired such a big name actor for so small a part, as it's not much even when you take his extra scenes into account. The other character is Dr. George Arbuthnot, who has one scene in the book, and then I'm pretty sure never appears again, while he has multiple scenes in the movie. This is good, as it gives the character more to do that be a plot convenience in one scene then scoot off, never to be heard from again. 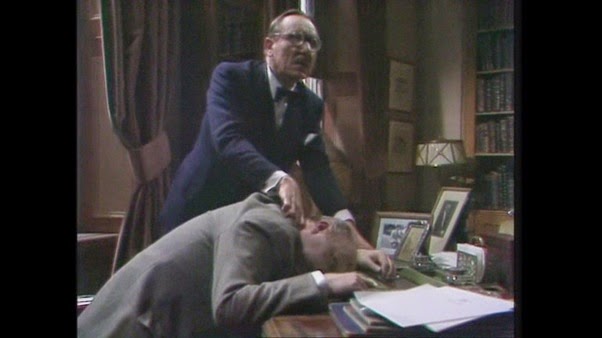 The acting in Why Didn't They Ask Evans is all good, although Connie Booth never attempts an American accent despite that being her character's nationality. Still, better that than what the actor playing the Canadian Nicholson does! He's attempting a Canadian accent, and failing so much it seems like he's just not trying! Also, no-one in the Welsh town of Marchbolt has a Welsh accent! The actors are all British!

This obviously isn't an effects feature, so there's little to talk about in that regard-Just two pretty big mistakes. The first is when a 'certain character' has seemingly shot themself in the head, and there's zero blood or brain splattered all over his desk, or the walls, or anywhere! The second problem is the lack of fog in the movie's opening scene. This is important in the book as it's the whole reason everyone believed the dead man accidentally fell off the cliff, as he couldn't see his way around the area! If he could clearly see where he was going, then either this case is obviously murder or suicide, or the guy was incredibly stupid! 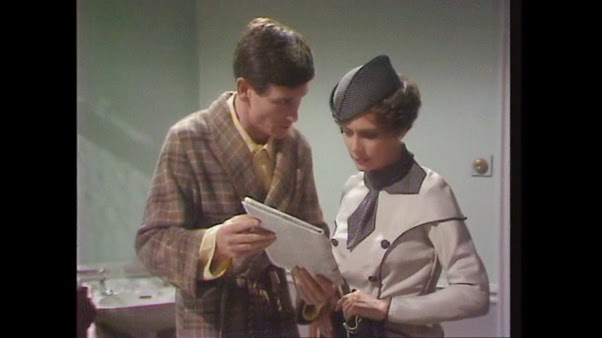 As I said, this was originally a miniseries, which is partly the reason behind the absurd length (the other reason being their faithfully adapting the novel), and it was divided into either six or three episodes. For its DVD release, it was spliced into one movie, and the pacing isn't as off as you'd think due to this decision, but the editing in those five spots is! Every time an 'episode' is ending, it cuts to the next scene so abruptly you'll get whiplash! Granted, it's a better trade off than hearing the happy theme each time after a menacing cliffhanger ending, such as the main character potentially dying of Morphia poisoning!

Finally, the scoring. It's ok, but repetitive, and said main theme is merely ok to me. Still, I mildly dig the storybook opening credits! 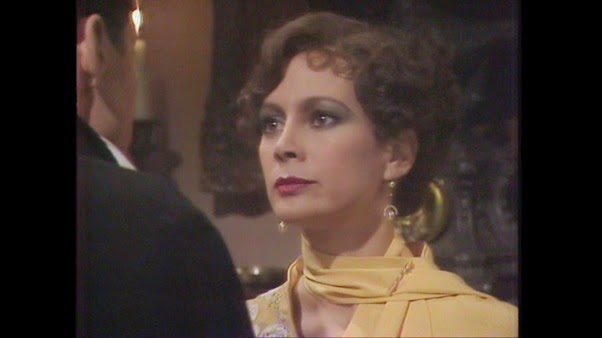 To finish, I don't recommend this movie, due wholly to its length. Still, it's a better watch than the Miss Marple TV episode that adapted Why Didn't They Ask Evans, which, as that dreadful series was wont to do, changed almost everything about the plot, making it baffling why they decided to adapt the book in the first place, especially as it has nothing to do with Miss Marple! And there's that version of The Sittaford Mystery that changed the killer, his motive, and I think the victim too! And there's when they adapted The Pale Horse and...
Posted by Chris Hewson at 8:29 AM