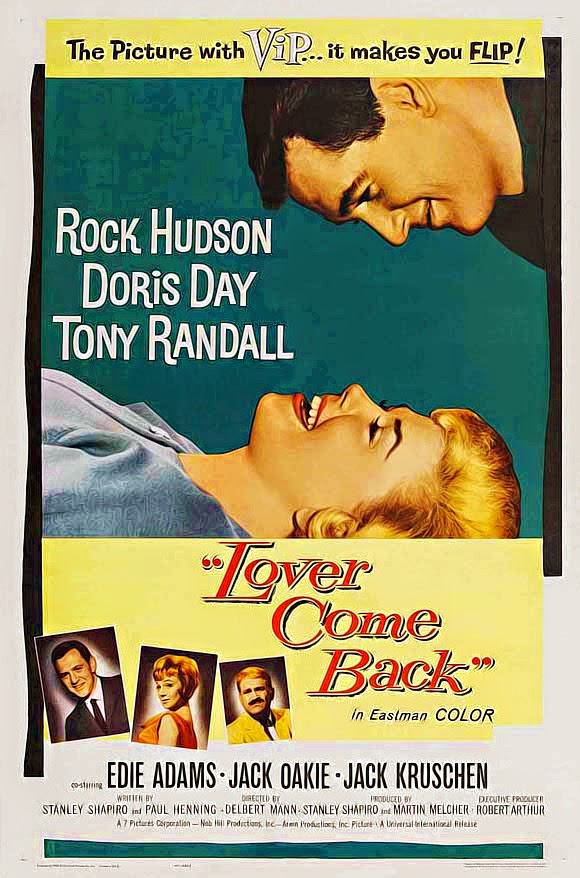 Lover Come Back, Doris Day and Rock Hudson's second outing together, is the second film I've seen where he's seducing her character under false pretenses. That's...disturbing!...

Madison ad executive Jerry Webster (Rock Hudson) is stuck in a battle with Carol Templeton (Doris Day), a rival from another company. She's trying to ruin his career, and even turns a ladyfriend of Webster's against him, but he wins back her favour by starring her as the lead in a series of advertisements of a mystery product known as Vip. Jerry immediately shelves the commercials, having no desire to ever air them. Unfortunately his boss and friend Peter Ramsay unwittingly allows the ads into the public. After being away from the world on a camping trip for a short time, Pete and Jerry come back to find that Vip is in high demand, with everyone eager to know what this product is, and dozens of companies wanting to get it on it.

Jerry hires the misanthropic Dr. Linus Tyler to create Vip, and sets out to distract Carol, who's intent on finding out about Vip and taking its account for herself.  While Dr. Tyler is in a rush to create whatever Vip may be, Jerry is taking his time in seducing Carol, pretending to be Tyler... 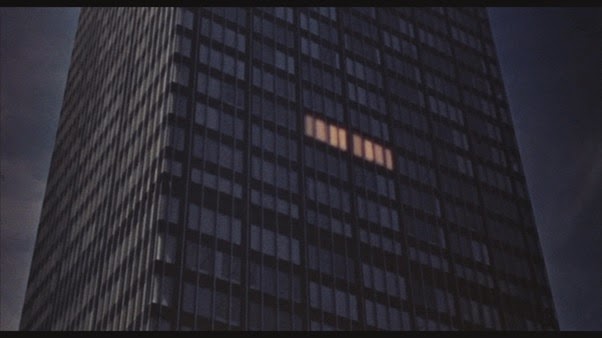 Lover Come Back is a comedy, but don't believe any source that calls this movie a romance, as the only thing close is the main character's deception. More on the story below.

The acting is all good. Doris Day is definitely a delight (I have a thesaurus in my hands and I have no intention of stopping), but this is Rock Hudson's movie for sure. My Doris Day four pack should be retitled The Rock Hudson four pack (which coincidentally, is exactly what most women (and undoubtedly plenty of men too) envision on his chest). Tony Randall is hilarious, from his first scene, to his last! I need to watch more films with this guy! There's also Ann B. Davis (Alice the maid, from...that show), who's pretty funny, but unfortunately she's only in the film for a bare minimum of scenes. 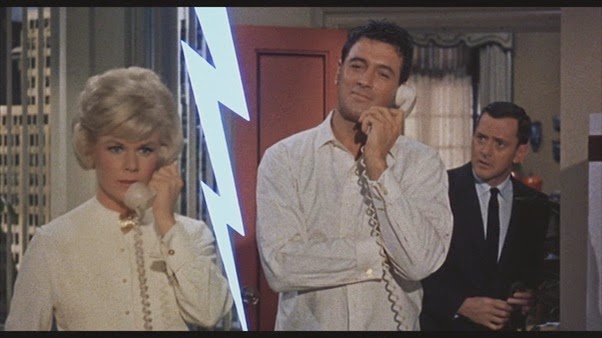 Lover Come Back's writing is solid, and it's very funny, and there are many hilarious lines and exchanges!
Pete: "Well you should feel sorry for me. You don't know what a handicap it is to be born rich!"- Jerry: "Some handicap!"- Pete: "Don't sneer. Wealthy people are hated and resented! Look what's written on the Statue of Liberty. Does it say 'Send me your rich'? No, it says 'Send me your poor'. We're not even welcome in our own country! It's all very well for you to laugh, you're one of the lucky ones, you grew up in the slums!"- Jerry: "That's lucky?"- : "Of course it is, you had everything going for you. Poverty. Squalor. There was only one way for you to go-Up. But I started at the top. I've done it the hard way!"
Carol "All I know is Jerry Webster's trying to land it, but we're going to beat him to it."-Millie: "Are you sure you wanna tangle with him again? He fights rough."-Carol: "Then we'll fight rough. This is war, Millie!"-Millie: "That means liquor, wild parties, getting sponsored girls, right?"-Carol: "Right!"-Millie: "Good. I'd like to volunteer for frontline duty."
Pete: "We've sold a product that doesn't exist! We have ruined the great agency of Ramsey's."-Jerry: "Relax, Pete."- Pete: "Dad will kill me!"-Jerry: "Pete, your dad's dead and gone."-"No he isn't, he's around someplace. He wouldn't go away and leave this business to someone like me!" 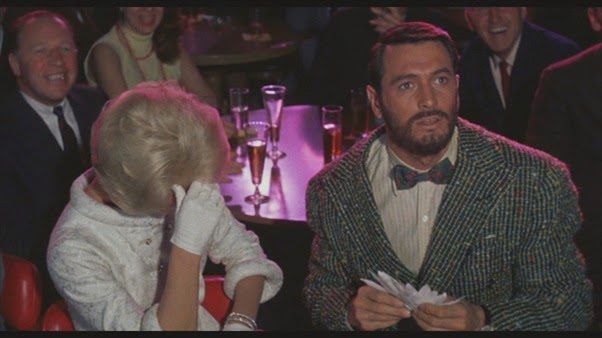 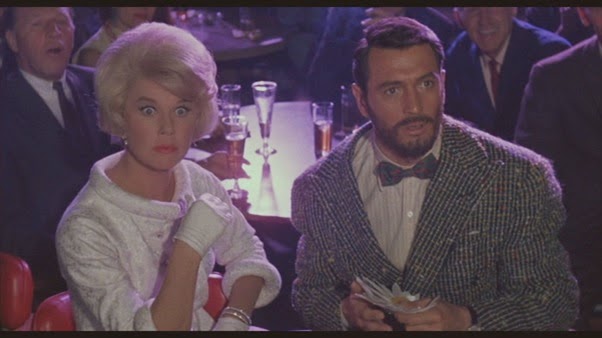 Lover Come Back is unfortunately not without problems. Once the 'romance' part of the film starts, the films slows down a lot. Not only does the main plot come to a complete standstill, but the likeable Jerry Webster becomes a pretty unlikeable sack of crap due to his actions-Actions that don't even make much sense! He could have just skipped the whole rigmarole, and (either as himself, or pretending to be Dr. Tyler) told her to go away. That way, we wouldn't lose an entertaining comedy, and he wouldn't go to jail for committing serious fraud.

The film's ending is odd and rushed. It seems like production was wrapping up, but the script wasn't yet over, so they hastily wrote the ending on a tissue on a Ritz dinner table. 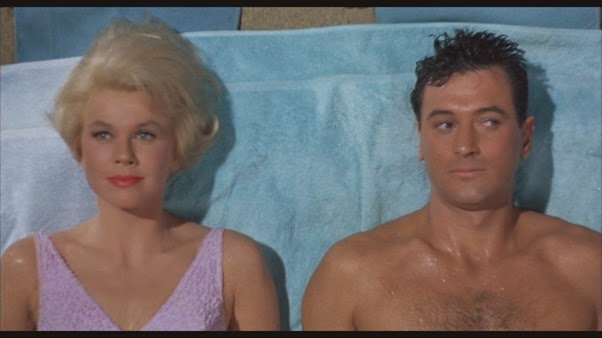 There are also some pretty irksome qualities about the film's final act. As far as this ending is concerned, if you and the woman who despises you for grievously deceiving to her get drunk and bang, then you're both a-ok fine, as long as you were married in the interval. Well that just makes everything ok, doesn't it!...Yeah, this is painfully dated, almost to a degree of misogyny, and possibly misandry too. Neither party wanted to knock boots, and especially not get married! Granted, the moment this happens, Jerry is instantly in love with Carol, which is pretty out-of-nowhere, as is her eventual reciprocation. 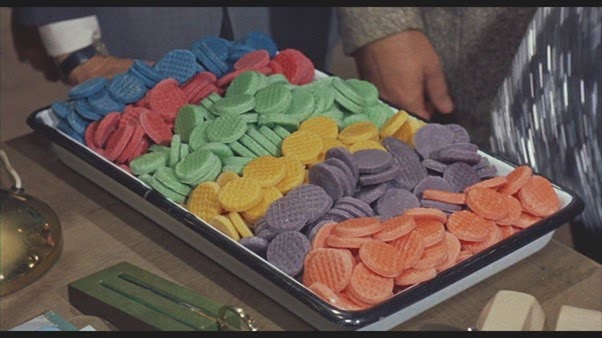 So, to finish, this is a fine comedy, albeit one with serious issues. I also haven't the slightest idea why it's called Lover Come Back. Still, I recommend it to Doris Day and Rock Hudson fans...
Posted by Chris Hewson at 8:36 AM