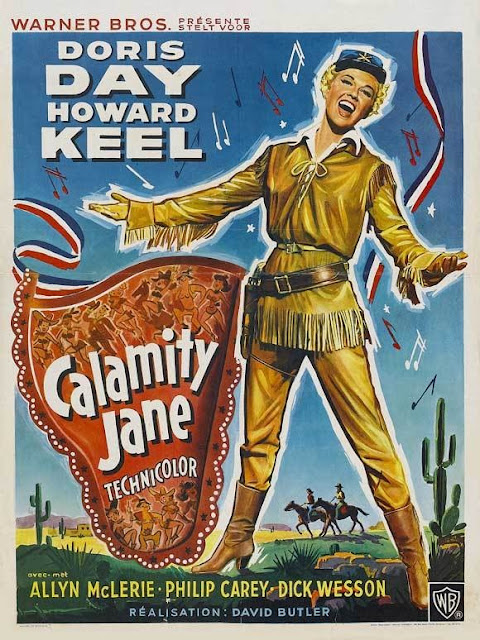 Another December and I've got more Doris Day movies to look at! With any luck I won't get any duds this time!...

Cowgirl Calamity Jane routinely traverses the untamed landscape, facing many dangers, and always telling of them to her fellow townsfolk in Deadwood, albeit with extra spice added to her tales. Meanwhile, the local theatre manager has hired who he thinks is a female performer (a rarity in these parts), but turns out to be mistaken. Calamity calms down the riled-up crowd by swearing to find the popular starlet they've all been pining for, and arrange for her to perform in Deadwood. Things go wrong once again when Calamity accidentally brings the singer's maid Katie Adams along. Not only does this cause turmoil with the townsfolk at first, but also creates a love quadrangle between Calamity, Katie, Wild Bill Hickok, and Lt. Dan... 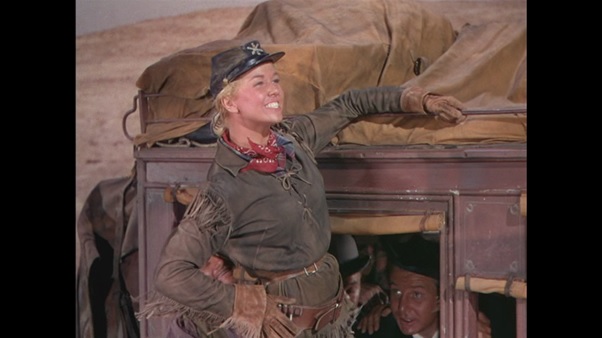 Calamity Jane is a mixed experience. The story is a pretty standard western romance, containing many of the genre's tropes (as well as being quite unflattering to Native Americans whenever it deigns to mention they exist).

Calamity is quite an unlikeable character, and she's sometimes pretty unbearable. One thing I found weird about the character is how she exaggerates about her exploits, yet is still a legit frontierwoman who gets involved in real adventures/battles, and totally kills people! Why'd you need to exaggerate when you already live like that?! But then again, but apparently the real Calamity Jane was like that, so I guess this is true to life in that regard? 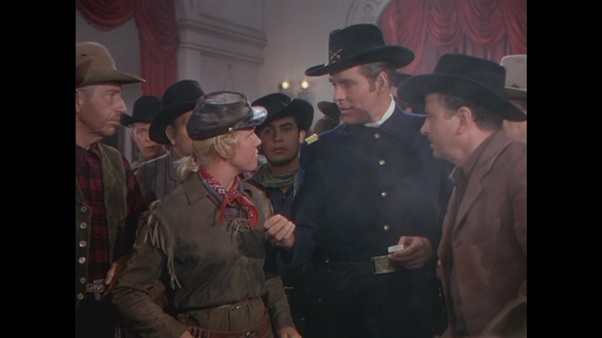 Given the conventions of popular fiction, you just know there's gonna be a point where the scruffy and tomboyish Calamity cleans herself up and dresses pretty, much to the shock of the townsfolk, who all now find her beautiful. That does happen, but it takes a surprisingly long time, and thankfully Calamity at least still acts the same, despite the change in dress.

There's one large hindrance to enjoying this movie fully, and sadly it's Doris Day herself. The idea of her playing a gruff cowboy is awesome, but she goes way too overboard in the role, affecting a voice that she really didn't need to. She speaks in this very exaggerated voice that got on my nerves, and I thought 'She couldn't possibly talk like this for the whole movie, can she?'. The answer is yes, she can and she does! It's annoying! It also doesn't do wonders for her singing in some spots either. 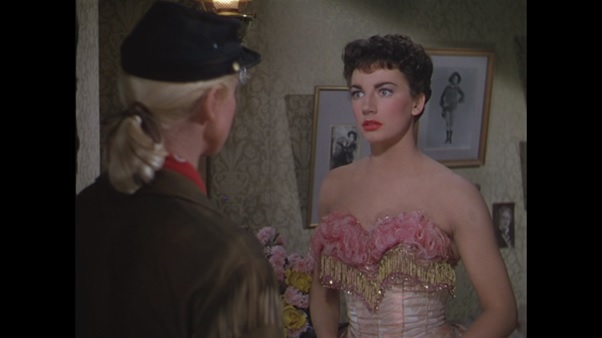 The rest of the acting is fine. I really liked Allyn Ann McLerie, and often wished she was the sole lead character. Howard Keel as Wild Bill Hickok is decent, but his character appears rather fleetingly in the first half, and looks friggin' exactly the same as Lt. Dan's Philip Carey! Bill is ok as a love interest, even if it is a bit frustrating that you know based on the vitriol they're showing each-other that Calamity and him are gonna end up falling for one another, even though they both already love other people. Lt. Dan meanwhile has serious trouble taking "No" for an answer when women are involved, which hardly endears him to the audience.

By the way, while we're talking about her, why the heck was she disparagingly known as 'Hollywood's oldest virgin'?! The characters she plays either have sex, get married and have sex, or are already married and have had sex, having raised a family. Add that to a lot of her movies being about relationships and/or battles of the sexes, I've no idea where the impression of her being virginal came from. 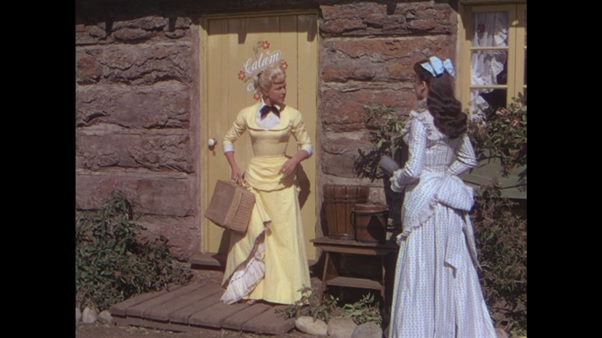 The musical numbers are likewise mixed. Some are quite good, others not so much, and others had potential but were let down by the performers, such as Howard Keel's too-deep voice (which sounds like it's being put on), or Day's gruff tone, both made worse by a 'sing-speaking' song at one point. I of course know Day can sing, so I chalk her sounding kinda bad to poor direction, and if I'm being generous I can say the same about Howard Keel. 'Ok Howard, you're doing pretty well but we just need you to sound a liiiitle bit deeper. No, deeper'.

The dance choreography is mainly isolated to the leads, while the townsfolk just stand or move around them in the numbers they're present in. The dancing itself isn't that interesting, ok but not fantastic, however the direction and staging is great! The Windy City number for example is all in one take and contains quite a few impressive scenes! Must've been a pain to shoot, but worth it.

This film is a convincing enough western, with good looking sets. It does become noticeable pretty quickly though that there are only a few sets and locations available for the shoot. It's not particularly egregious or cheap, but visible all the same. 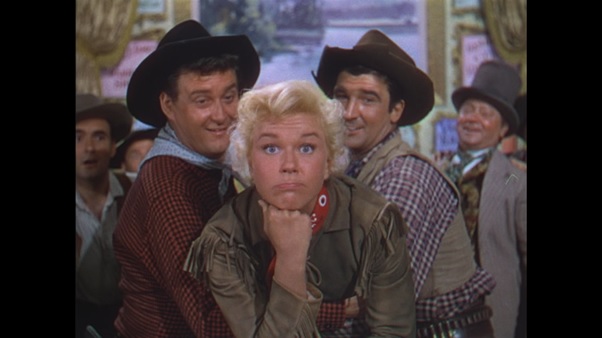 Calamity Jane didn't really get off on the best foot with me, and there are quite a few things that annoyed me, but overall it's not that bad a movie. Given her not being at her best here, I hesitate to recommend it if you're a Doris Day fan, but if you're just into older musicals, or if you tolerate American westerns, then sure, you can give it a shot...
Posted by Chris Hewson at 1:52 AM