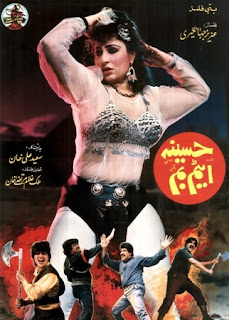 Body shape is something that's all too often the same in mainstream pictures. They push the idea that to be attractive and happy, you have to be slim, much to the chagrin of bigger people out there. You're probably wondering what a sleazy revenge movie from Pakistan has to do with that. Well, the movie I'm looking at today, Haseena Atom Bomb, showcases a plus-sized vigilante heroine!...

Haseena is an exotic dancer making ends meet with her job at her nightclub.  One day, tragedy strikes when a gang of bandits attack Haseena and her fiancee. She's raped, and the fiancee is hung. The wronged woman swears to bring her attackers to justice, and upon recovering, sets out to work. She gradually gets revenge on her rapists one by one. Meanwhile, a roving warrior contends with his own band of rivals, who he decides to end the threat of once and for all before they can hurt any more women... 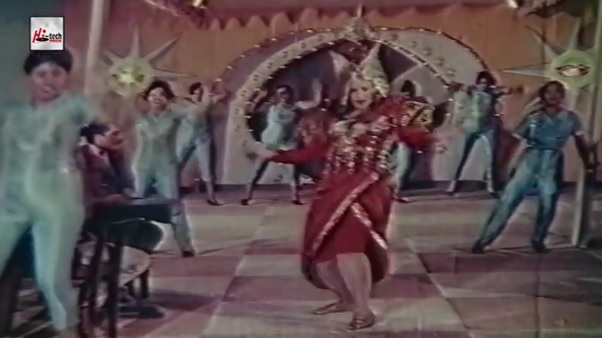 This is a weird movie! What we see is pretty simple, all things considered. A woman is raped, and she gets revenge. She lures each to their unsuspecting doom (because they're seriously too stupid to recognize the woman they raped) and kills them. It's the presentation that's somewhat bizarre though, from the film's musical nature, to the over-the-top performances, and death by comically large syringe, which does serve its intended purpose and isn't just for show.

While not understanding Pashto, I don't think that necessarily hindered my understanding of the plot, since it's gotten across through the power of song, sexual assault, and punching. Lots and lots of punching. There's so much action that we don't actually get a huge deal of dialogue! The dialogue there is isn't that hard to grasp, like a certain twist at the 90 minute mark. Overall, the story to Haseena Atom Bomb isn't important, and is only an excuse to string together various setpieces until the excitement's over. It's potentially a cathartic movie for those who want to see rapists punished in creative and fitting ways. 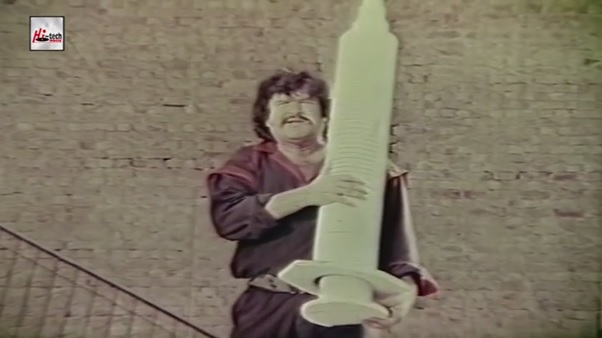 The story here also feels disjointed, as if two separate movies were edited together. Characters from one story show up in the other, so this was all part of the same production, at presumably the same time. Some bizarre editing moments make one wonder though, such as part of the final fight taking place at night while the rest is at daytime. The ending is a pretty depressing hodgepodge. With only a few minutes to wrap up at least two plot threads, it does so clumsily, including an impromptu musical number mid climactic fight scene. The end itself is incredibly abrupt to the point of nearly resembling a cliffhanger, but that might be down to missing footage.

The version I saw was only 2 hours and 18 minutes long (yes, only), and I've heard there might be longer cuts out there. Perhaps those fill the plot in with greater detail? Or maybe it's just more fights or song and dance numbers. 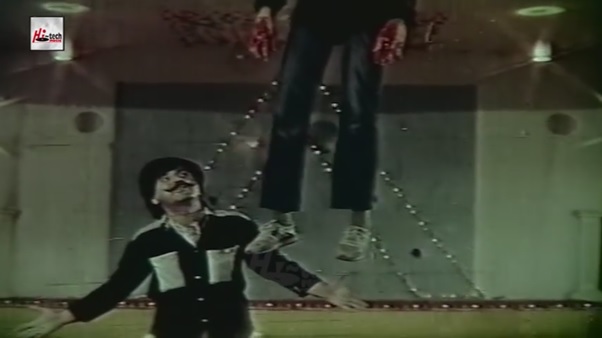 There are quite a lot of characters to keep track of in this movie, and it's a while in before Haseena actually does anything proactive. It's ok, it does happen. It just takes a while, is all, as you'd expect with a movie this long.

There are plenty of strong female characters here besides the titular heroine, and they're all distinctive, too. We've got the more open dancer Haseena, the more conservatively dressed police officer (albeit still predisposed to skimpy Bollywood fantasies), and the tough-as-nails good bandit. Their motivations are all kinda the same, but how they go about things can differ.

As played by Badar Munir, the main hero guy who's sort-of the lead of the B-plot (until the ladies take over for the most part) is fine. When he's introduced upon saving Haseena from an attack, we see an extended flashback sequence that goes for around 10 minutes. While I guess it is a pretty effective if overly blunt way to introduce you to a character by info-dumping their entire backstory all at once, this segment felt pretty superfluous for the longest time, but does end up coming into play later on when it comes to another character.

There's one comic relief guy who's either a Greek chorus, or fancies himself Pakistan's answer to a one-man Abbott and Costello. Could be both. While weirded out at first, I didn't begrudge his presence, actually finding his friendship with Haseena pretty neat! 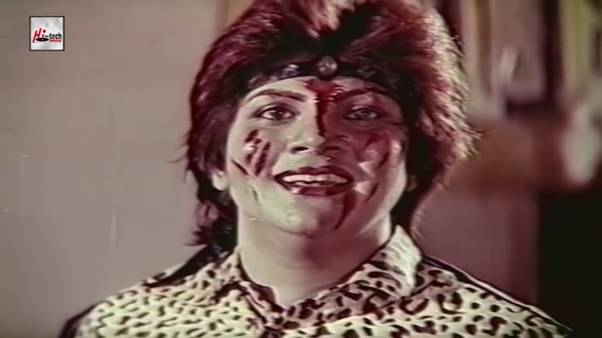 Haseena Atom Bomb is definitely a cheap production, but it doesn't look too bad for what it is. The   violence is where it looks the worst, with axe hits for example obviously either not touching targets, or only lightly tapping their backs to show they've been struck. The fake blood looks fine, never looking fake, if you know what I mean.

The fight scenes are decently staged, but sometimes dizzying. Hits rarely connect, and the same shots are often looped again and again to show repeated strikes. It's a potentially effective trick (see, Godzilla vs. Megalon for a good example), but here it's used a bit too much. One thing I liked about the battles is that the heroes aren't seen as infallible, so it's never boring in that regard.
The sounds effects are of your typical chopsocky variety. We hear the same cheesy noises, even when characters simply walk into each-other. 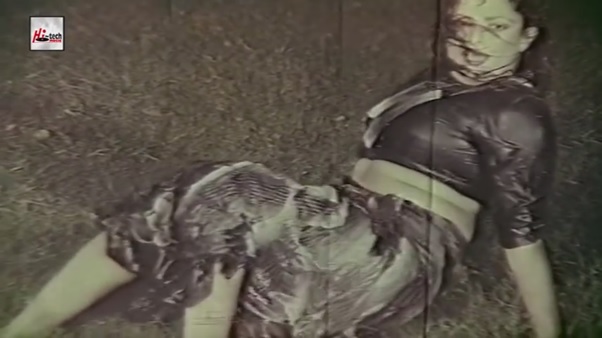 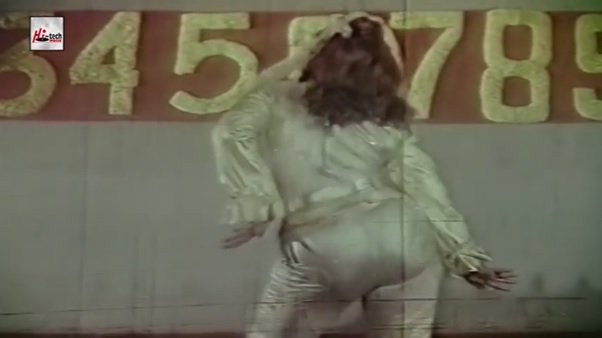 The acting is pretty bad, hilariously overdone in some parts, but ok in others. I liked Mussarat Shaheen as the lead. She brings a lot to the role visually (and no, I don't mean in that way, although yes, she does in that department too). Interestingly enough, she's currently a politician. Not sure if she's still in the scene, or how far she's gotten. Hopefully that's all going well for her. There's also another Mussarat Shaheen who worked in Pashto telefilms before her untimely death a couple of years ago. May she rest in peace, and I hope to see her filmography soon. 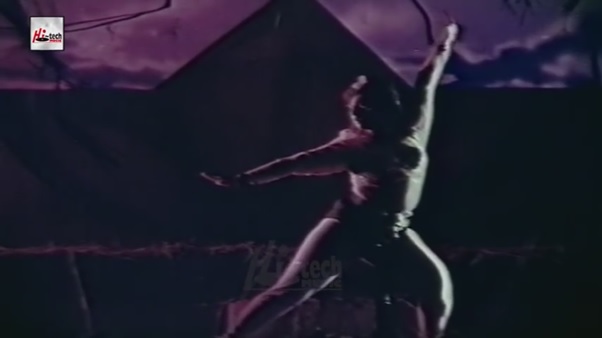 I'm not sure I'd say Haseena Atom Bomb is a good movie, but it's certainly...interesting! It's not worth watching if you're looking for something goofy though. While it has kooky elements in spades, I'd recommend you have an affection for both weird stuff in general and South Asian cinema, as well as an extremely patient disposition in order to sit through the whole movie without exploding from boredom...
Posted by Chris Hewson at 7:02 AM