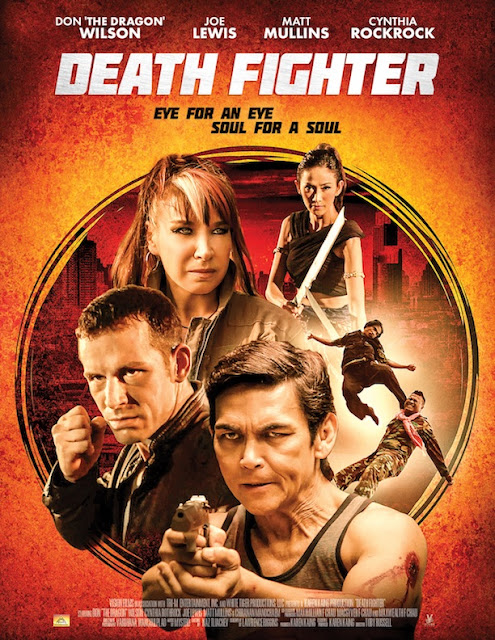 Michael Turner is a fresh-faced cop form the States, on duty in Thailand. Together with his older partner Conrad he's trying to take down the notorious gangster and warlord Draco, but the operation is a failure and Conrad is killed. Deciding to go outside the law, Michael is sent to old veteran Bobby Pau, who's disdainful of his idealism, but decides to help anyway. As they trek into the East Asian jungle they meet new allies, and come closer and closer to Draco and his fearsome entourage...

A homage of the old direct-to-video action films of the 80s and 90s, Death Fighter is a very entertaining picture! My first exposure to it was through the trailer, which gave off the impression of something cheesy, but also earnest, and fun. I was curious to say the least, and thankfully the movie lives up to what it promised. 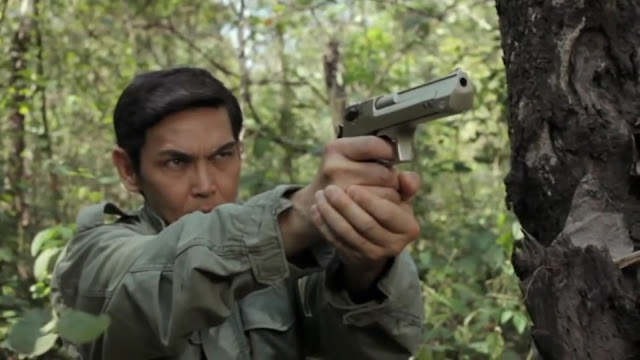 The plot is a simple one, but it's well crafted, has stakes, and always feels enough. It's never underwritten, nor does it try and bite of more than it can chew. There's not only plenty of action on display here, but heart as well.

Michael is a good lead, and the movie introduces us well to him as a character, and his involvement with the plot. You feel for the guy's on-the-rocks relationship (whether or not you find his girlfriend to be a huge bitch will probably depend on the viewer), and you understand why he feels he has to see this case through to the end. He's always likeable, and has good comebacks, but also knows his own limitations, and isn't afraid to rely/relies on others. The movie also does a good job at showing him as someone who is experienced in general, but new to jungle surroundings.

Bobby Pau is your typical burnout drunk who used to be the best there was, but has fallen on hard times. He's written in a believable way, and gets the lion's share of the film's snark. He's not exactly optimistic at first, and has very low opinions about their odds in succeeding, but the fact that [this of all characters'] optimism steadily grows really makes you feel like the heroes are actually doing something right, and might be able to succeed. Pau handles the emotional moments well, and his backstory really helps inform his character. He's got a kickass name too! 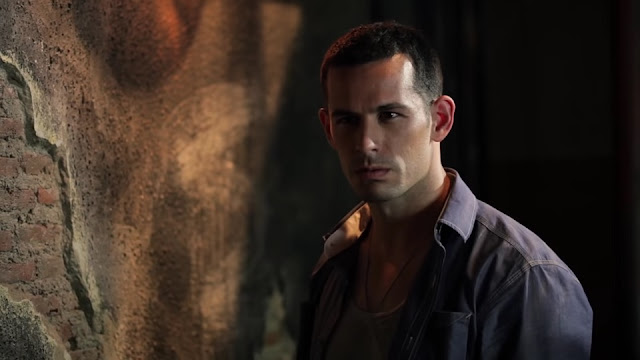 Going in I figured Otto would be the foreign tracker who gets killed half an hour in, to build the tension. Thankfully he sticks around, and despite being a man of few words he has quite a personality, and is very likeable!

The last main character is local doctor Yui, who helps the group when they stop and rest before the point of no return. She's a sweet lady, and her camp gives you a good sense of what and who the heroes are fighting for. Yui is quite the action powerhouse herself! This is neat  and I like the extra dimension to her character, though it did overfill the broth a little, when we've already got three other protagonists fighting the army of bad guys, including three distinct villains. It also felt a bit weird that this otherwise peaceful doctor is able to take lives with such ease during the climax! She also gets one of the most ridiculous action scenes in the movie, when she uses a fallen guard's body as a bulletproof vest, and holds off enemy fire long enough to throw one of the body's grenades! Crazy, but fun! 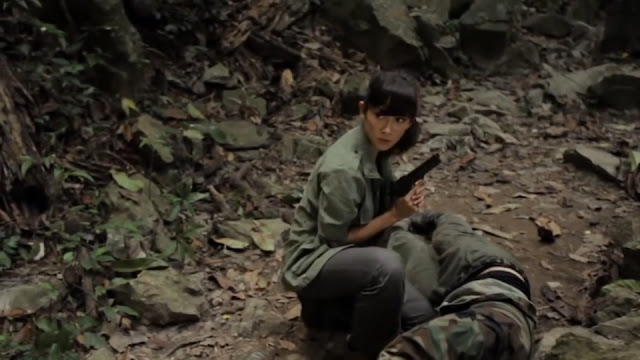 Not only is there a great variety of heroes, but the same can be said of the villains. Besides the endless army of henchmen, there's the lieutenant, Cynthia Rothrock's Valerie, and Draco himself. As for that first guy, he's pretty good, but I feel the movie made a mistake not killing him off after the big fight scene he has with Michael. There are already plenty of characters, and more than enough villains remaining, so we don't need extra time devoted to someone we've already seen beaten, when Cynthia Rothrock and the big bad are still waiting in the wings.

Valerie's amusingly psycho, and isn't someone you'd wanna meet without a rifle in your hands. Draco himself is pretty over the top, and not the deepest of characters, but does come across as someone you wanna see stopped.

There is one problem I have with him as an antagonist though. While I appreciate that the movie's not a bloodbath where dozens of innocents die, Draco actually does so little villainous beyond ordering one guy's execution and killing Michael's partner that he's actually not as intimidating as his fearsome reputation suggests. He's got about 50 men and they're all defeated easily enough in half a day, leaving his entire operation in tatters. That leads me to the film's other problem. I really don't buy that this warlord was able to pose such a threat to so many people for so long when this was all it took to take him down. 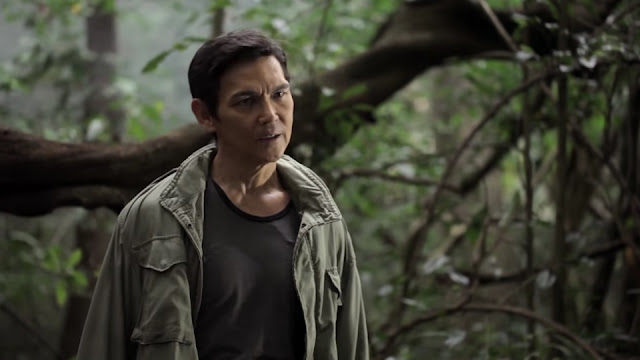 There's some nice dialogue here,  such as the line"Courage isn't the absence of fear, just the ability to overcome it" with the follow-up of "Overcome it for the right reasons". Very true!

Then there's the line that sold the movie for me "White Tiger. Sometimes it takes a stubborn tiger like you to to get a reluctant old lion like me to fight And you're white." This line both sounds triumphant in how its delivered, and had me pissing myself laughing. I love that the film has a sense of humour at times, and mixes it well with the more serious elements

The action in Death Fighter is a lot of fun. The choreography is all good, and everyone clearly knows what they're doing. The talent on display is neat to behold! A few moments are cheesy, and some of the brawls are a little over the top, but never ridiculously so. Until the ending that is! I mean it in the possible way when I say the way the main villain is defeated is both riDICULOUS, and stunningly unique! You've gotta see it to believe it! 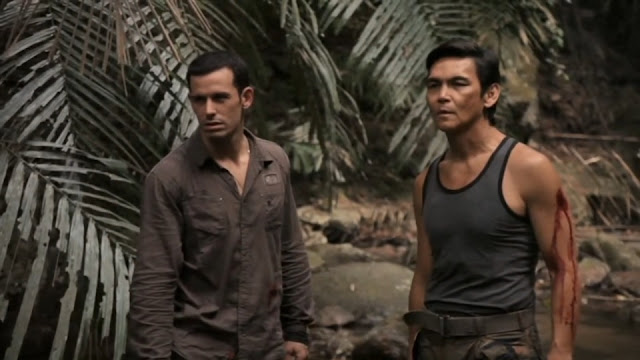 Matt Mullin's acting is hard to describe. He delivers a good performance, carrying the film well enough, but his tone of voice often seems to sound too...gentle? Too casual, maybe? It's a little strange and distracting at times, but like I said it's not a major issue. He's otherwise an effective and engaging lead. Don The Dragon Wilson is great as usual. The man's always had a perfect demeanour, and even in his 50s he's still never missing a beat, with either charm, or action. He could probably put most 20 year olds to shame!

Former kickboxer Joe Lewis makes a brief appearance. As the short-lived partner, he's understandably not in a great deal of the film, but he doesn't have a walk-on role either. He feels like a proper character, and is important too, no matter how short his role is. Chiranan Manochaem is very nice, both with vulnerability and emotion, and asskicking. Prasit Suanphaka rarely says a word, but is a really likeable presence. At first I thought his character would just be boring, but he was just the opposite. 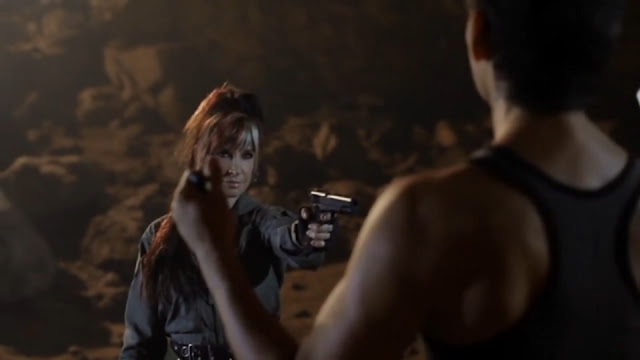 Cynthia Rothrock is clearly relishing the chance to play a villain, and is amusingly sadistic! She's great to watch. Jawed El Berni is neat as the third villain. He's mainly there to look tough, but with little dialogue he actually gives off some interesting expressions, which tell you what he's feeling in a subtle way. Because of this, I was wondering what he'd do as the movie went on. Lastly, Gigi Velicitat is crazy! I don't know if I'd describe his performance as good per se, but does he nail crazy? Sure does!

The direction here is good! The slow-moving shots through the jungle are good, utilising the location to its fullest, and creating a nice atmosphere]. The fight scenes are mostly directed well. There's no shaky-cam or quick cuts with 100 edits per second (thank God!), though some fights were a little too zoomed in and close up for me. Not a big deal though, as you can always tell what's going on.

One last random thing to note is attitude when it comes to actors. Some can have bad attitudes, and be real prima-donnas, who take criticism really poorly. Don The Dragon Wilson however is the opposite, coming across most definitely as the kind of actor who takes criticism well! He also knows how to comment on Youtube reviews of his own movie without coming across as a defensive asshole! How many people can ya say that about! 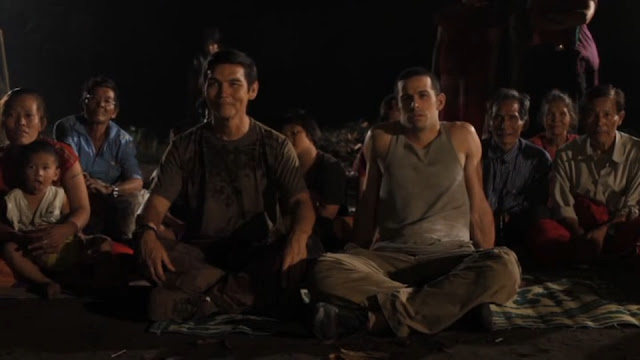 Overall, Death Fighter is quite a pleasant surprise! It really reminds you of the DTV action films of yesteryear. They weren't perfect, and neither is this, but it's still a great time to be had, delivering on every front you want it to...
Posted by Chris Hewson at 11:31 PM