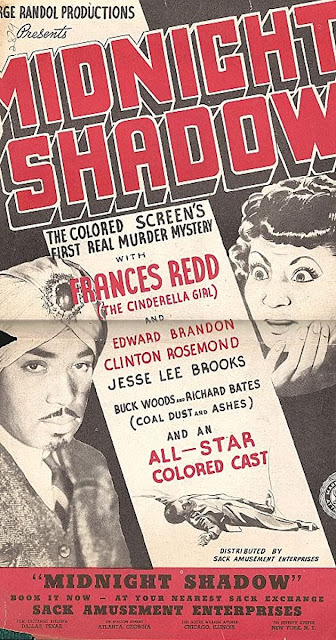 In a sleepy African-American town, trouble is afoot. A young girl Margaret has just been swept off her feet by a charismatic foreigner, much to the [consternation] of her old boyfriend. Her parents are split down the middle, with her mother disapproving, but the father is trusting enough of Prince Alihabad to share with him papers of a secret oil field in the family, which Margaret will inherit on her marriage. That night, tragedy strikes and the father is murdered. The police begin investigating, as do some private detectives hoping to find success. Is the obvious suspect the culprit behind this killing, or is there another motive?...

[*No, it's the obvious suspect. There's nothing complicated here.] 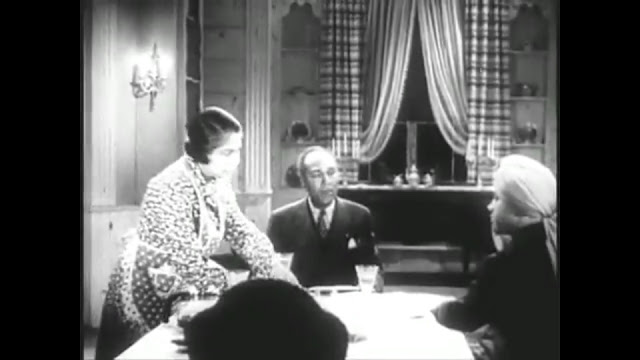 With its opening crawl detailing the unique nature of small town black Americana, Midnight Shadow promised to be an interesting picture, but some problems were apparent from the very beginning, and I hoped they wouldn't grow. The film really has its work cut out for it, as it tries to set up this community as a living breathing entity unto itself, populated with a diverse cast/roster of characters and conflicts, but has only 52 minutes to explore it. Because of this the film never really fleshes out anything, nor can it decide who to follow. Margaret? Her spurned old beau Buster? The crooked Hindu? Or the two would-be detectives?

The other big issue with the film is its pacing. It's very slow, and often quiet too, compounding the trouble. Scenes that should take 1 minute take 5, and so on, and while no scene on its own is boring per se, when taken together it's a bit of a frustrating experience. The movie has severe 'Hurry up!' syndrome. Like I said, it's not bad, far from it, but we're half an hour in when we've reached what should have been the 10 minute mark. Characters will ass about meaninglessly while we wait for them to do something. 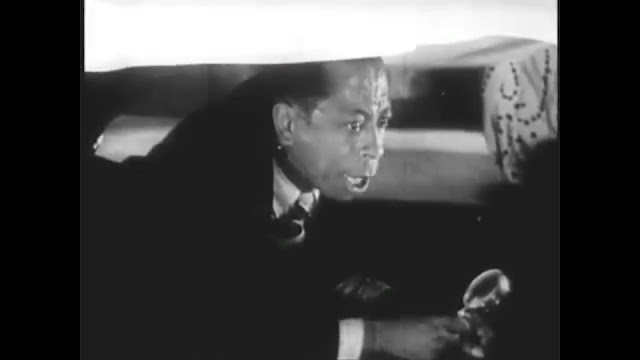 The plot isn't very good, in more than one way. The first is that it starts out as one thing before becoming another. This starts out as a small-town romance, with a heroic figure trying to win back his girl from the clutches of a fake fortune teller trying to steal her family fortune. But then the movie suddenly becomes a murder-mystery, albeit one with no clues or suspects. I was looking forward to   even if it was a pretty cliched story, and it felt like a big missed opportunity to see this squandered/.

What makes Midnight Shadow interesting is the question is what makes a film good, its quality as a product, or what it represents. This isn't always clear cut, because naturally a movie being bad is a pretty conclusive thing.  However, even if a movie is bad, that doesn't mean you can't respect it, or admire the message it tried to convey. Midnight Shadow is a 1930s film that says without condescension or malice that small town black communities are awesome, and hopes to show us that. What an admirable sentiment, especially for this era! And people look down on low budget cheapies. Pah! 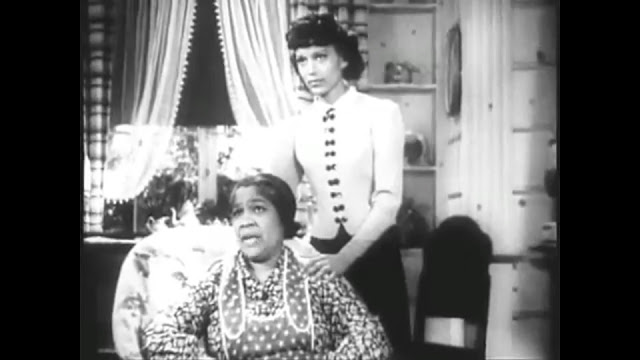 In this particular case I really respect the movie for what it strived for, but am really annoyed at it for not presenting this as best as it could, instead choosing to faff about with bullcrap for most of the runtime. Still, a little goes a long way regarding a topic like this from a time like this, so I may not like this movie as a product, but goshdarn do I love what it preaches!

The spiffy opening credits had me looking forward to seeing this large cast in action, but really only a few of those players has any substantial role, and even few appear consistently. Margaret is a likeable enough romantic lead, but we've come in so late to this story that we never got to know her and Buster's old relationship, or their new one, or her romance with Prince Alihabad. Buster meanwhile is never really fleshed out. He's just there, and we're expected to root for him because he's the handsome young guy who's not the comic relief. He's a bit of a demanding little shit in places. They get back together at the end with zero effort or conflict, in a pretty unsatisfying way. I knew it was coming, but you guys coulda had more fun with it! 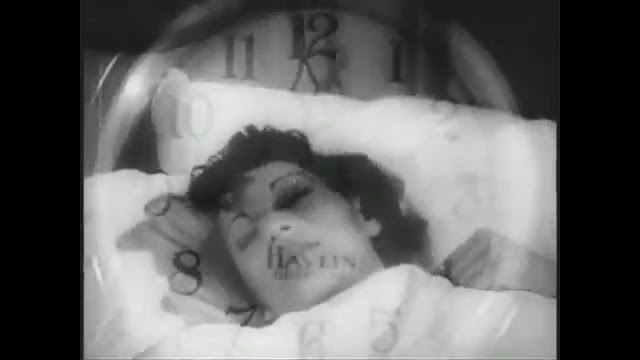 The true leads are dopey amateur detectives Lingley and Lightfoot, and had I known this going in I probably would have been 10% less annoyed. Despite their awesome names (there has to be a Lingley and Lightfoot series in the future!), the duo themselves are mixed. Sometimes funny, sometimes annoying, and they mainly waste our time. They don't seem to contribute much to the end, but get all the credit anyway. Ah well, I don't mind. God knows we barely saw any of the 'main' detectives.

Prince Alihabad is one of the more interesting characters, in that he's a proud Muslim!...well, not really*, but that's how he acts at first. It's very unique to see a Muslim character in an old African American film like this, especially a black one! Africans have had a long history with Islam    and the film even knows that Allah and God are one and the same! (There's some confusion on whether he's Hindu, but I put that down to Turbans being cross-religion, and Google not existing back then). Now, as you may have guessed by the first frame, Prince Alihabad is a con-artist. While on one hand it bugs me that this means he isn't really a Muslim character, at least it never comes across as judgemental.

By the end everyone works out he's a sham, though I wasn't sure/was unsure what made the heroes realise that, nor did I understand his connection with the main criminal affair, if any. The whole ending is very rushed, but that most of all. 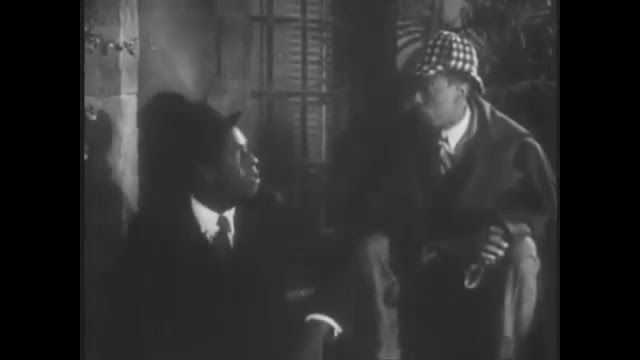 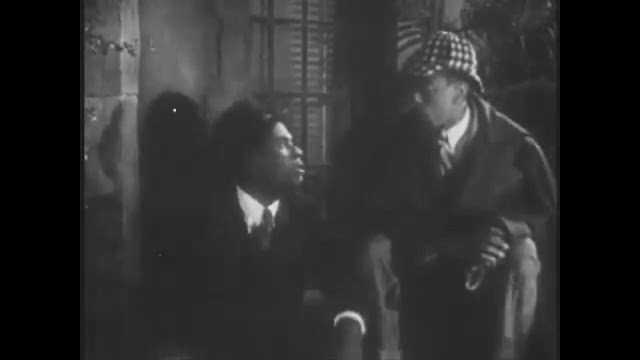 The rest of the characters are ok, though underused. Margaret's father is a nice though very naive guy, while her mother is more levelheaded and grouchy. The father is murdered, though at first I thought it was the mother, and no-one really seems that broken up about it as the film progresses, making me very confused. Detective Sergeant Ramsay is ok, but appears too little. One scene of his I liked was when Buster tries warning him about this shifty Hindu looking fellow who's probably in on the crimes, and Ramsay immediately comes to the conclusion that Buster's just throwing this foreigner under the bus to save himself!

The film looks pretty good, with some neatly directed and staged moments! Midnight Shadow is mostly pretty common, but in shines in places. It's at its worst in the prolonged night-time sneaking scene early on. It's hard to see what's happening, and because of this it's hard to care. There's very little music to speak of here, and this really hurts the film, though there is one very nice track, which perfectly complements its scene. If only the rest of the film followed suit.

The performances here are mixed. Some are good, some are really neat and effective, while others are laughable bad. Over-emotive with melodramatic reactions. Frances Redd is cute as Margaret, while Edward Brandon as Buster is one of the weaker performers. Richard Bates and Buck Woods are a bit of both, and have a couple of slightly amusing moments. Lawrence Criner (credited as John for some reason) is competent, but nothing more . I don't mean he's bad, but rather his character is never really allowed to live and breathe, always acting the same, calm and reserved no matter what. 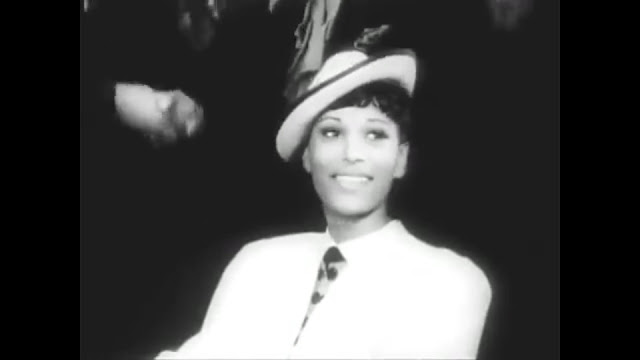 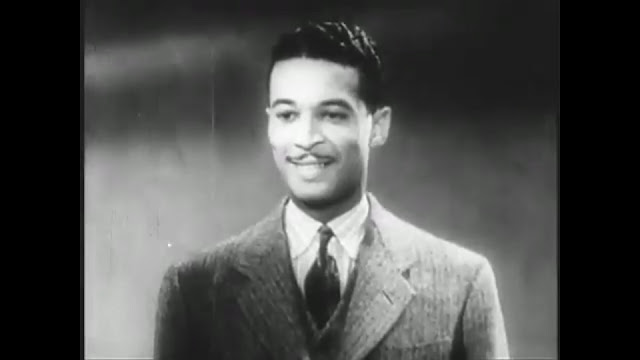 Midnight Shadow is a crummy film. It promised a lot, but never delivered, not on anything. I appreciate it for its positive messages, but as a film it's a pretty leaden time, and you could do much better...
Posted by Chris Hewson at 11:16 PM