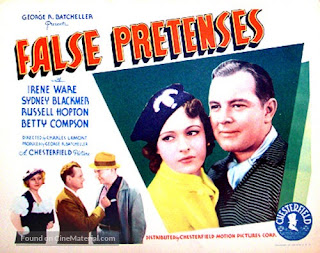 Low collar waitress Mary Beekman is down in the dumps. Her thuggish boyfriend Mike is getting on her nerves, and won't take the hint when she dumps him, ending up in her losing her job after a public spat. While out walking in the night, Mary's paycheck flies off a bridge, and in her haste to go after it, a drunken bystander mistakenly believes she's trying to commit suicide and 'saves' her. The man, former millionaire Kenneth Alden, is likewise in the doldrums. Hit by a sudden brainwave, Mary comes up with a plan to help them both. Alden will shop her around as a = for a beauty  and get rich men to invest in her, with the end goal being marriage...

False Pretenses is a thoroughly entertaining 1930s rom-com. It's simple in some ways, and predictable in others, but never badly. You always look forward to seeing where the story goes and what happens to all these colourful characters. The different or unpredictable aspects also help shake things up.

Unless it turns out I'm mistaken, the plot of/to False Pretenses is quite unique, and has a distinct creative flair. With its = anglings, this is a fun story of playful deception, and while it may not utilise the = of its concept to the fullest [extent], it does enough  It does a decent amount, but then it gets almost bogged down in a romance, and kinda forgets itself. The romance isn't bad, but I [kinda wish we'd gotten more]

Unlike [other films], the pacing in False Pretenses is actually pretty good. I think the problem is that unlike other hour long films of the time, this could've stood to have had an extra 20 to 30 minutes on the runtime.

ending is a little crowded. There's a lot happening and very little time for it to happen in. The whole = theft subplot is unceremoniously dropped, with little explanation as to what the shady butler is up to. Is he a thief or isn't he, movie? Explain!

funny old social rules, like how it was considered impolite for a man to wear a hat indoors but fashionable and acceptable for a woman to do so, or how = just can't accept the concept that a rich person of high esteem could possibly have stolen her jewelry.

Ken: "Not the Grenwich Beekmans?"-Mary: "No, just the telephone book Beekmans."
Mary: "I suppose you know everyone in the social register, don't you?"-Ken: "Well, everyone worth knowing. Of course, that eliminates most of them."
Ken: "Miss Beekman, there are certain things a lady does not talk about"-Mary: "Name one!"
Miss Milgrim: "Don't be impatient, dear. I feel you've aroused tremendous interest."-Mary: "Yes, but don't forget, I'm here to collect the principle and let the interest go!"
Ken:"Oh, there's someone I know, will you excuse me?"-Clarissa: "Oh no, you're not gonna get rid of me that easily!"
Ken: "While we do know that Courtland is worth ten million"-Mary: "He may have it but he's certainly not worth it!"

succeeds in making Pat so likeable that it's quite a surprise when his true colours are revealed. I suppose something had to happen to drive a wedge between  since Mary and Ken are the main duo, and thus most likely to end up together, but surprisingly they never become a couple, and things actually do work out between the young lovers. I guess

As for said reveal, I thought it felt out of nowhere the first time I watched it, albeit amusing enough, but on rewatch it's actually quite well foreshadowed.

while = scheming, she's not catty, and the two women end up becoming friends by the end, laughing over their former = [rivalry].

soivice  and poifect   whose idea of a proposal is "Say the word and we can get hooked up" (followed = by "If you wanna be somebody, why not Mrs. Michael O'Riley!"), and for whom romance is clearly a secondary art.

funny watching his accent go from a refined Transatlantic = to a = Chicago drawl.
has an odd voice, but it's =, and kinda fits well with her more mature personality. She successfully comes across as scheming in a good way
fun watching  cooking  mouth watering French toast, though watching it burn was painful.heartbreaking!