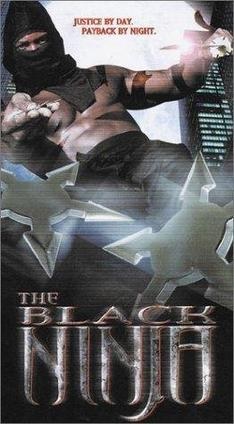 Defense attorney Malik Ali is notorious for protecting the lowest of the low, and always getting his client off the hook. Meanwhile, a mysterious vigilante has been prowling the streets recently-The Black Ninja! No-one realises the two are one and the same, though Ali eventually opens up to one Dr. Tracy Allen. She's a therapist who recently witnessed a gangland killing, and now crime lord Finelli wants her dead, hiring an old enemy of the Black Ninja's to get the job done... 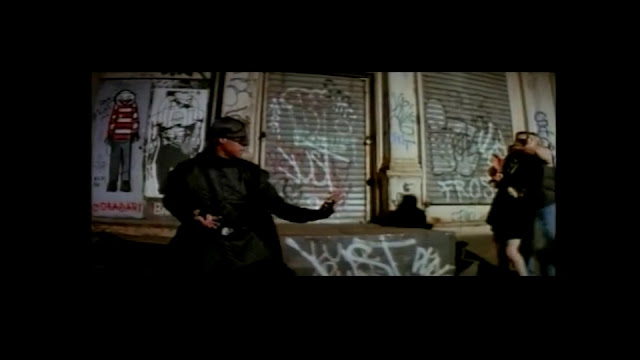 The Black Ninja is a bad movie, but it's an amazing time! This is exemplified in the very first minute! The abrupt pacing, the cheesy fighting, the terrible dubbing and stock sound effects, etc, followed by a credits sequence that could've been made in Microsoft Paint. That first minute is a perfect package, that tells you everything you need to know about the movie, and whether you'll enjoy it or not. And if you're anything like me, you'll enjoy it!

The story itself here is pretty standard, but told in an alright way. With some strange elements too. It doesn't make sense that Ali gets criminals off the hook just to beat them up later as a vigilante. They never would've gotten free in the first place if you hadn't defended them! 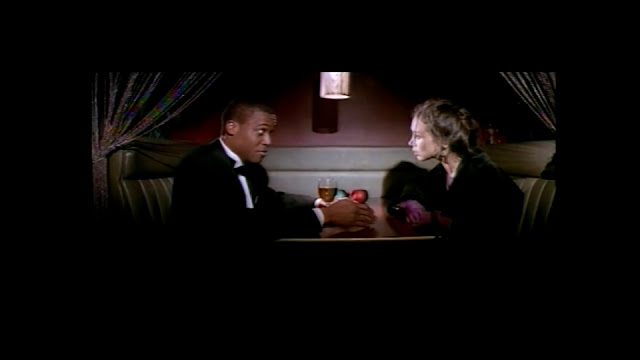 Made for a minuscule budget, this whole production has a very amateur feel to it. The movie is full of poor continuity and ridiculous moments, like the characters pondering on why Finelli could possibly have killed this cop, only for a flashback have him openly say why, right in public! In front of a heck of a lot of witnesses who aren't Tracy (who's nowhere to be seen, despite apparently/purportedly being the only witness). Some of these issues might have been fixed with more money, but others not so much.

Overall the film is paced pretty well, and I never get bored with it. The only real exception is the last half hour, which is mostly comprised of Ali tracking down random crooks. There is a reason, but since all these encounters end the same way, with him getting nothing, they feel pointless, and just pad out the movie, since Finelli/the secondary villain is gone, but it's too early for the final encounter with Hagiwara. At least none of these scenes are bad though, in their own right. The plot is eventually furthered by Hagiwara just calling Ali upon the phone! 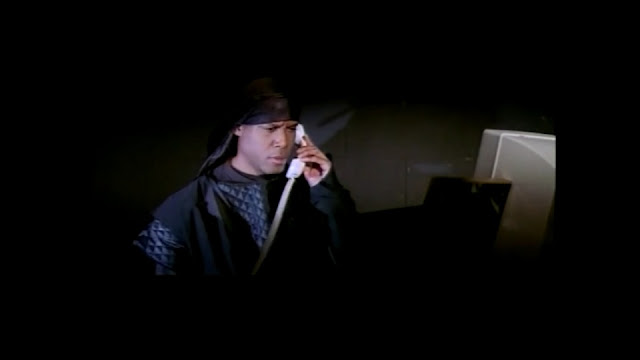 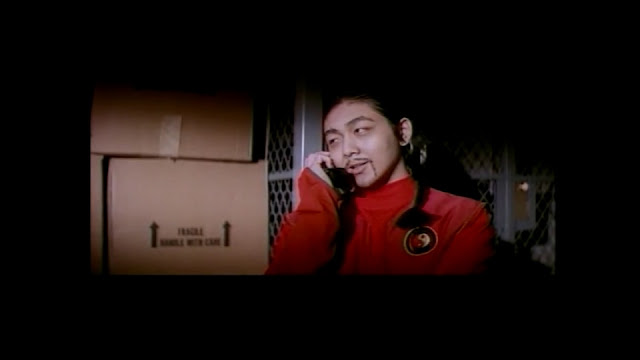 The characters here are very familiar for action film fans. You've got the righteous hero with the tragic past, the sweet love interest who helps him open up, then gets kidnapped, and stereotypical Italian-American mobsters as the villains. Malik Ali is hardly likeable, and kinda smug early on. It is all a front, but I still wanted to deck him. When he shows his true self he's more likeable, though still a bit of a dope. He's an effective enough superhero, using either his fists or a variety of weapons against his enemies. His revenge against Finelli near the end has got to rank as one of the cruelest/most diabolical punishments you'll ever see!

Tracy is better, and despite a few moments of idiocy (she picked the wrong time to go find a/the ninja bathroom!), she gets some moments to shine too. Finelli is an amusing presence  The true villain is Shinji Hagiwara, the man who killed Ali's family. Despite the threatening build-up, he is the least intimidating antagonist possible! He is such a ridiculous character that he's too much! The movie might have its comedic side, but it shouldn't have a baddie like this if it wanted to be taken even a little seriously! Hagiwara gets his amusing moments, and it a pretty fun villain at times, whether intentionally or not. 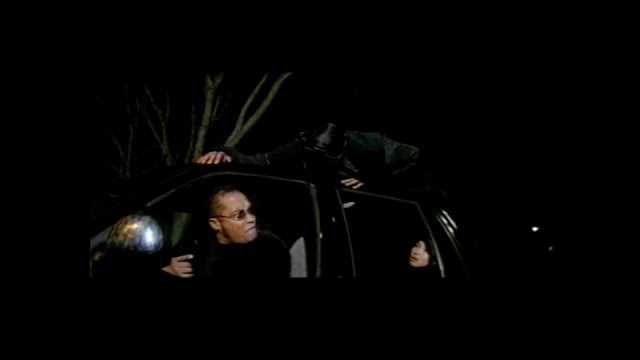 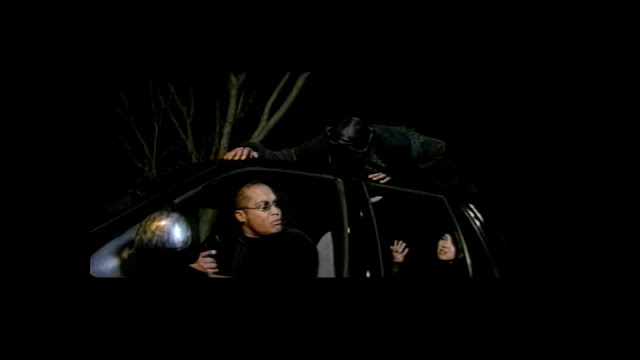 The fight scenes here are pretty poor, but with their good moments. Many of the punches don't connect, and the camerawork is often janky, but it's not all terrible. The editing also plays a significant role, as there are so many strikes and hits that get repeated not once, not twice, but three times! It gets beyond a joke after a while! I began to wonder if they were just trying to be cool, or covering up for other shortcomings.

Other edits are bad, weird, or almost come across as mistakes, like when a nighttime brawl sees the baddies get tossed out a window into what appears to be broad daylight (or Ali just has aspotlight on his house during bedtime!).

As for how the film itself looks, it's ok. The sets are convincing enough, even though some are cheaper than others. The budget is The Black Ninja's biggest enemy, but also its biggest friend. It may not be able to do what most other films can, but even its failures make you laugh. 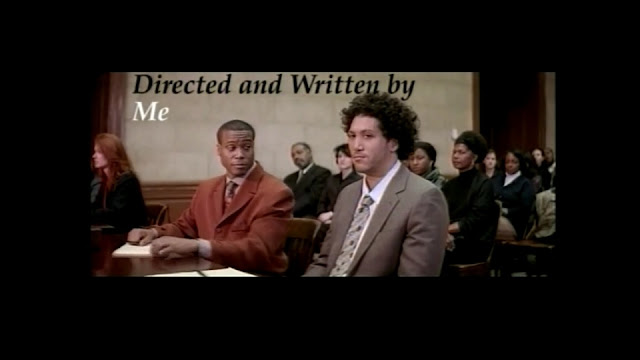 Doubling as both the writer and director, Clayton Prince is also the lead. He does an alright job in places, bad in others. His delivery of the more comedic lines work better. Carla Brothers is ok, despite looking lifeless in some scenes. Nicky DeMatteo is fun as Finelli, while Yuki Matsusaki is spectacularly terrible as Hagiwara! It's hard to say how much of the bad performance is deliberate, or just lack of talent, and it's also hard to say whether it's just right, or a bit too much, even for this film. Regarldess, I am at least glad he's here. My favourite performance comes from Michael Chance as the acerbic detective. He doesn't appear as much as I'd have liked, as he livens up whatever scene he's in. 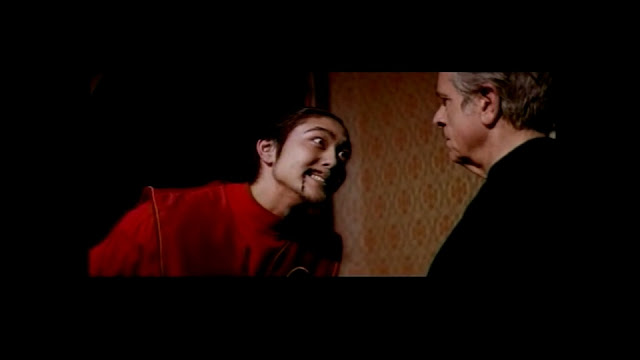 Some of the funniest scenes are whenever characters emotional, especially Prince! The big "NOOO!" he gets at a certain point is hilarious, and had me just about rolling on the floor! Brothers meanwhile looks...I don't wanna use a word as harsh as bored, but she looks [bored].

The soundtrack here is fun! The title track will be stuck in your head all day long. It has other lyrics, though the only one you'll make out is the constant "Oooh, ooh ooh, black ninJA!". It's repeated a lot, but never too much, luckily. The rest of the score is alright. The sound effects are one of the cheaper parts of the movie, from the archive screams in places, to the constant swooshing everyone makes when they movie. Even when they only move slightly-SWOOSH!

Something I like about The Black Ninja is its diversity. An all-black movie, with Asian representation too! That's nice period, but especially because the African-American community has always embraced kung fu movies. It's a really cool historical relationship, and different cultures joining together.

The Black Ninja perhaps bit off a lot more than it could chew, and it is not a good movie in the traditional sense. It also probably wouldn't be an inspiring mark on your CV! However, it has a charm to it, and its heart is in the right place. So while it may not be any Enter the Dragon or Rumble in the Bronx, it's still well worth a watch for those who appreciate wacky martial arts fare!...
Posted by Chris Hewson at 11:59 PM