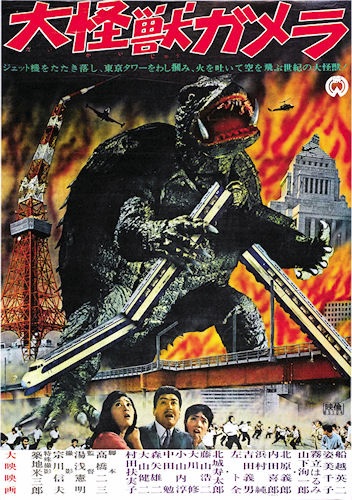 Thanks to the popularity of Godzilla, other monsters were soon on the way, some from Toho, and competitors, including rival company Daiei. Keen to replicate their rival's success, Gamera was born!

A scientific expedition is taking place in the arctic meeting with a community of Eskimos, when suddenly a Cold War scuffle leads to the explosion of an atomic bomb, reviving an ancient creature. The Eskimos warn of this beast, Gamera, and the authorities immediately take note, though it is too late for the nearby ship, immediately showing the destructive powers of this monster. Nobody knows what to do, and every new idea seems to fail. But perhaps the answer may lie with the small boy Gamera befriends... 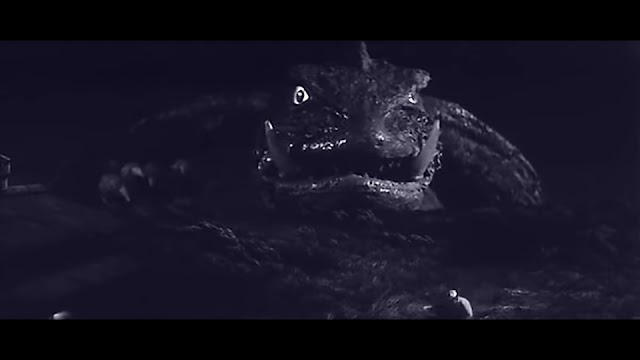 Gamera the Giant Monster gets off to a very good start! It introduces us to the main cast in the opening minutes, as well as our monster! His first appearance coincides with the title, and it's spectacular. There's always a consistent = of the monster, and his appearances compared with those of the humans. The human cast are never a drag, and carry the movie well. They're also quite varied too, so we're never just focusing on the one thing all the time. Try as they might though they can never be as fun as Gamera is when knocking down building, or fighting the military! 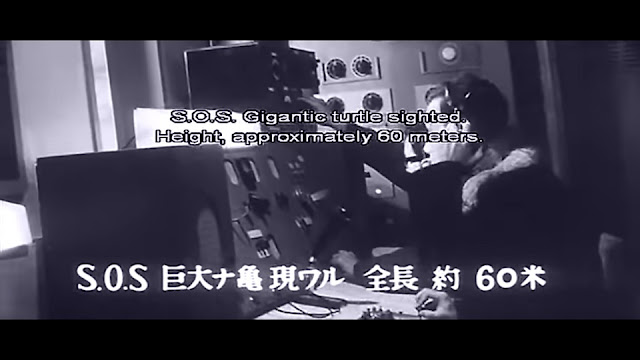 To its credit this isn't just a monster brawl but also pays attention to the characters, and they're a pretty fleshed out bunch. The main trio interact well, and have a good stake in events, although I did increasingly wonder why the government keep calling the main guy in, when he's really just a random biologist who saw Gamera for like 5 minutes in the Arctic

The child Toshio is pretty likeable. He's never whiny, and while he may have been crazy to trust Gamera, he's never wrong. We never get a scene where he wildly sabotages anyone's plans out of misplaced admiration in a 60 foot tall monster. Something else I appreciate is how everyone believes him, no matter what! When he's saved by Gamera, not only do the adults previously fearful of the giant turtle believe him, they witness it, and praise the creature! It's nice seeing a kid in a monster movie be believed for a change, rather than endlessly pooh-poohed. 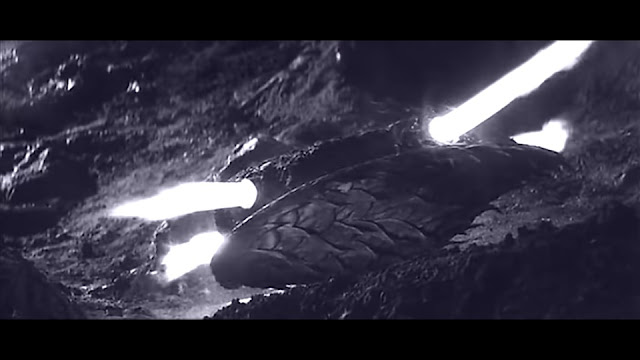 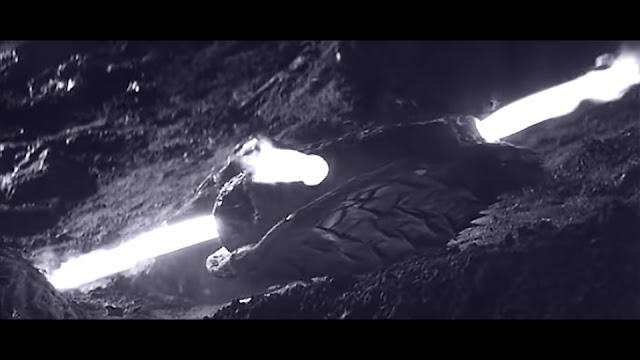 I also really like the film's portrayal of the Eskimos, as it doesn't show them as uncultured savages, but rather benevolent and normal people, who know more than the matter at hand than the scientists due to their cultural traditions and stories. I was a little confused though why the main characters speak to them in English, but the Eskimos respond in fluent Japanese.

Overall the film has a very positive message to share. Not only can its other main thesis be summed up with the simple words of "All turtles are good!" (a wise observation), but this movie made at the height of the Cold War shows all these enemies coming together as friends and allies to stop a global threat. It's pretty sweet, and never cloying or on-the-nose. 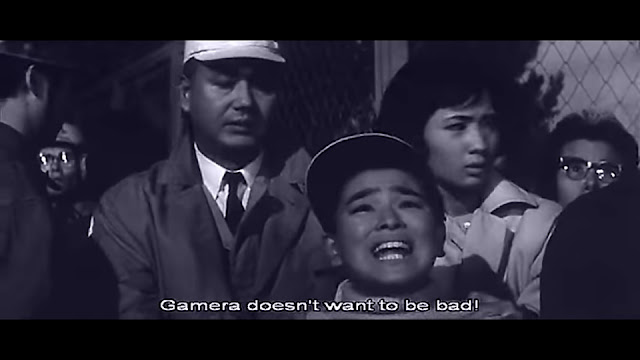 Then there's Gamera himself. He's the villain of the movie, but a complex one. He starts out = by trashing a = vessel, but then when he's on the coast, he saves a = Toshio from falling! When he could have crushed the boy with a single flipper, Gamera kindly set shim down, earning the admiration of many. The authorities still believe he's a force for/of destruction though, and try to stop him. They're a little mean, honestly! They're never shown as ignorant, and are always open to new suggestions, even from = Toshio, and yet al their = are destructive ones that just piss Gamera off even more. I wish they would have put more effort into = After all, he only destroyed the ship on instinct, and anyone would be pissed off at being woken up at 5:00 in the morning, especially by a nuclear bomb! The rudest awakening their is! His later destructive spree is more retaliation than it is malicious.

The destruction in Gamera is actually quite interesting. Tokyo doesn't take a beating until over halfway through the film. This sounds like it could be boring, but I like it, as it builds up gradually, culminating in this major escalation. In some movies the monster is already trashing Tokyo by the second reel, but the fact that it takes so long to get to the big stuff makes the destruction /catastrophe feel more important, and holds more weight. 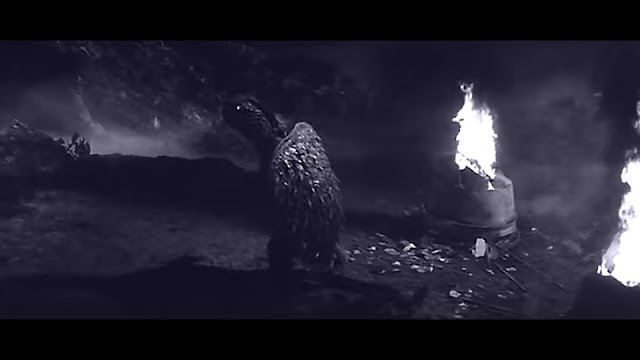 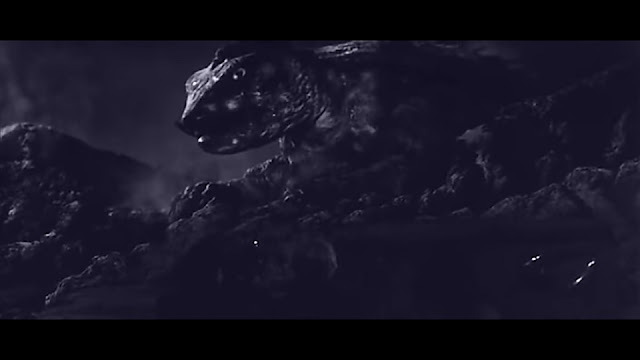 The effects here are very good. Gamera is a uniquely crafted monster, and is as scary as he is cute and slimy. You don't wanna mess with him, and anyone insulting him for being a turtle is gonna get stomped! He always moves convincingly too, in more ways than one! He not only waddles and swims, but flies too, as a spinning UFO! The models he destroys all convince, and the integration of the actors and real locations with the monster are always effective, even in scenes like Toshio falling from the lighthouse.

The sound effects are important too. Gamera's roar is great, and very distinctive! A truly blood-curdling howl, it really makes him stand out from Godzilla!...Most of the time. In a couple of scenes he's given a more traditional Godzilla style roar. 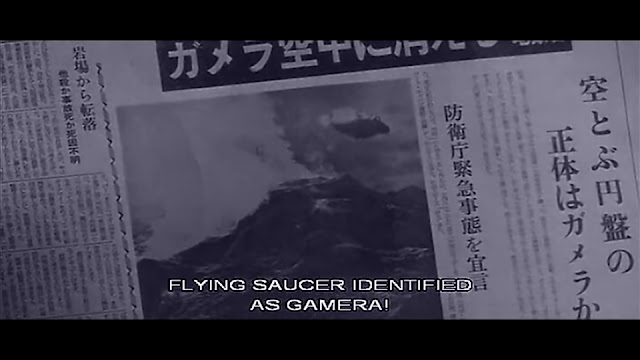 I watched the original Japanese version of Gamera. The American dub is a little different, not because it's shorter, but rather it's longer. It adds more American military characters, and =. But for the most part it seems like a good dub, not like the Godzilla ones that totally massacred the original films! As for the Japanese version, it's interesting in how cosmopolitan it is itself! There are scenes with American soldiers, as well as foreign diplomats. In the former scenes they speak their own language while we get very stylish Japanese subtitles over the screen, while in the latter they speak Japanese. And I don't mean westerners badly dubbed either. They are legitimately speaking Japanese!

The acting here is all good. The main trio are =, and the kid playing Toshio does a fine job. Some of the women playing his female relatives blended together for me (they and = looked exactly the bloody same!), but are otherwise nice. The older biologist is also =, his fake beard not hampering his acting much. The, errr, American actors though? Dear god they're awful! They're hilarious to watch with their bad line reads, some sounding hopelessly wooden, others sounding like Chicago mobsters as generals. I kinda hoped they appeared more! 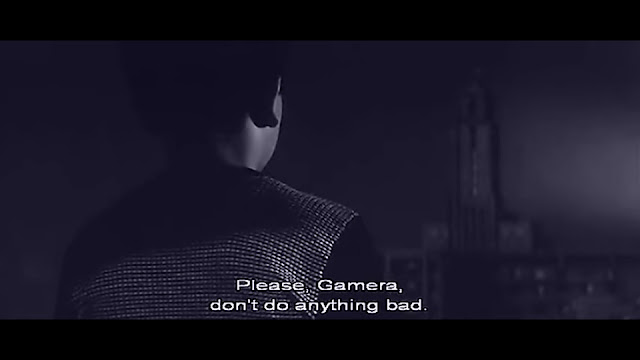 Gamera the Giant Monster is a great opening to a long-running series. It may have its ups and downs/highs and lows, but any series that starts out this strongly is sure to be never down for too long...
Posted by Chris Hewson at 11:01 PM