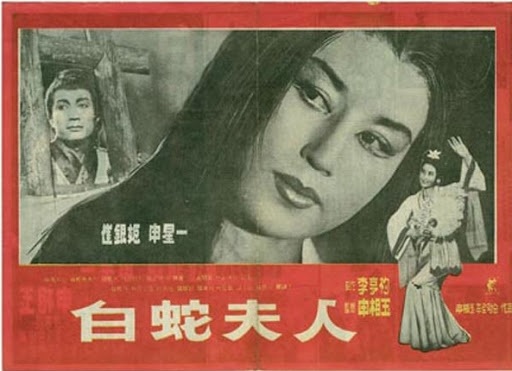 Heo Seon is a bright young man, who one day meets the lovely Baek, The two fall in love, but when she gives him some money for heir wedding, he's arrested by government officials believing them to be stolen coins. Not only is Seon arrested, but Baek has completely disappeared, like a ghost. She returns weeks later to free Seon from jail, and the two go to live happily in a faraway town. But when a plague begins afflicting the people, the blame falls on Baek. Desperate, the woman tries helping the townsfolk, all while trying to avoid telling her husband the truth about her... 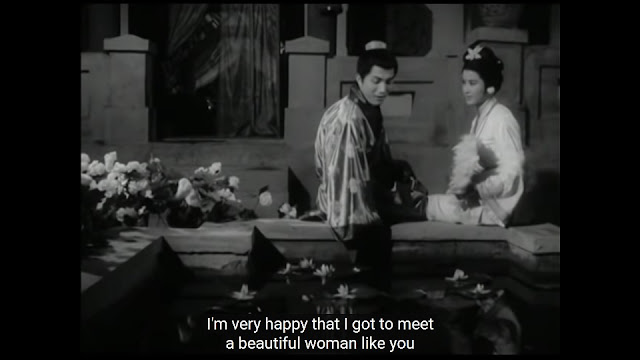 Korean horror has had a long history. While it may not have been the most popular genre, there was always an audience for it. Always eager to see more, I found Madame White Snake. With a title like that I immediately had vivid mental images of what the movie might hold, and began right away. It was about the 20 minute mark when I wondered something. If the movie is about a man being ensnared by a hungry snake woman, how come he's already fully ensnared less than a third of the way through? This is when the film took a sudden shift for me. It was about 40 minutes in when I realised this isn't a horror film. [So sue me], it's called Madame White Snake! I assumed she'd be eating people and using their bones to decorate her lair! 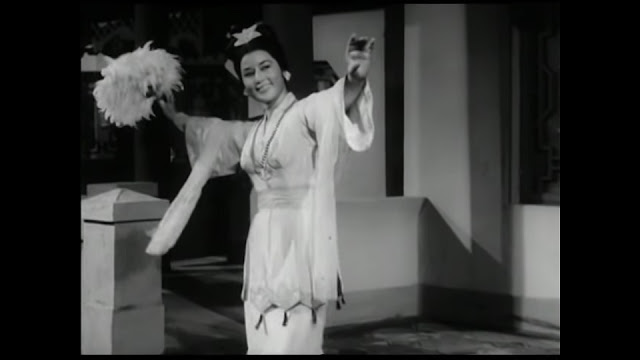 Madame White Snake is a nice fairytale. It's got its dramatic moments, and happy/romantic ones, with a good dose of supernatural twists and turns. The concept is a rich one, and while I felt the movie doesn't do quite enough with the fact that one of its lead is a snake woman, I wouldn't say it shirks away from showing mystical elements.

Where I feel is a problem though is in the pacing. The couple have only shared two scenes together before Baek disappears and Seon is arrested. It feels like the complication comes too soon. We perhaps should have been allowed to get to know these characters more and grow comfortable before the arrest and such, instead of it happening only 20 minutes in. The movie's story and pace continues fine after this, right up until the last act. The movie actually reaches a climax at the hour mark, and extends itself with an extra plot. This was pretty frustrating, and what we're given isn't bad, but is unnecessary. 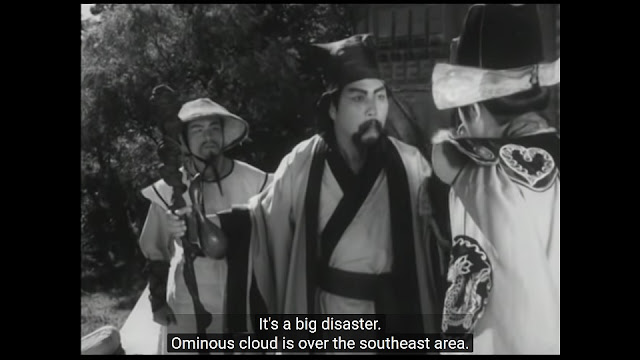 What's worst is when the film starts to retread plot points its already covered before! We get another set of scenes where Seon is confronted about the truth of his wife by a supernatural guy, he refuses to believe it, and is given a magical item to reveal her true self.

If  the false imprisonment storyline maybe could have had more weight, but as it is that whole section ends up feeling entirely pointless. It also makes you wonder what happened to Seon's family! Did he ever visit them or do they still think he's dead?

The characters are where Madame White Snake focuses the most attention on, to good effect. They're likeable enough heroes, while the villains are suitably loathsome. Heo Seon is very gullible, being lied to by just about everyone in the movie on a consistent basis, and he's also pretty hard done by, as he's arrested three times, and drummed out of two towns! The man's beginning to make a habit out of it! 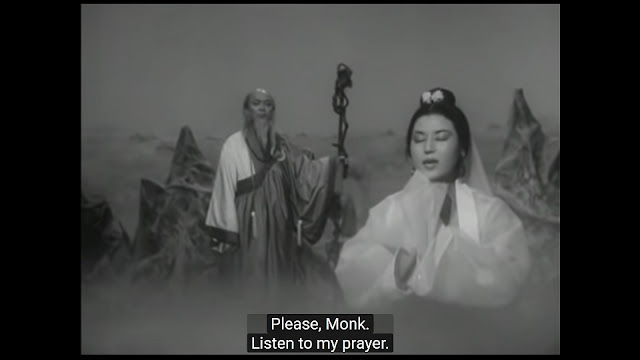 Baek is a sweet character with noble enough intentions, though I didn't like her passive-aggressive attitude she has at times. For example, during the couple's first reunion, Seon's understandably pissed off, after her disappearance and her actions getting him arrested and beaten, but she then responds with "Oh, well if you're not even gonna trust me then I guess out marriage doesn't mean anything to you!". She does that a few times, and it's frustrating seeing such bad behaviour, especially when she's lying to him about being a snake woman. Her most bizarre moment is after their reunion, where Baek declares out of nowhere that if he ever crosses her, she'll make him regret it. These moments aside though she is a loving/devoted wife, and humble to the heavenly forces she meets.

Baek's maid Cheong-ah is an amusing and likeable presence, acting as a good sidekick to her mistress. Their friendship adds a lot to the film, and it's nice that she gets a confidante during all of this. Then there's Seon's family. They're nice and supportive, though end up vanishing entirely after the first half hour, never seen or mentioned again. It's quite disappointing really. What a dick Seon is to not keep in touch! 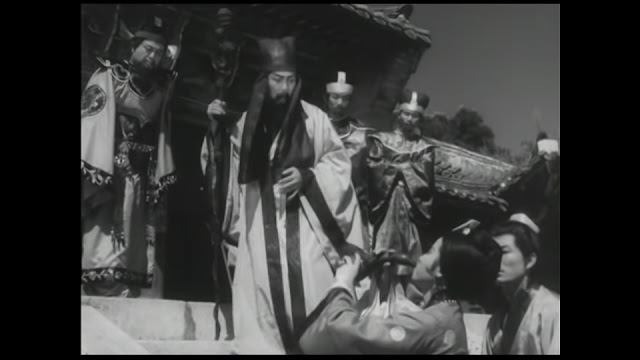 The first villain is a fake shaman who comes into town to make trouble for the couple, insisting that he sees a dark cloud above their heads, and that they are the ones responsible for a virus sweeping through the village. He's a good antagonist. It's maddening seeing his schemes play out, and cathartic when he loses and is denounced.

Another major character in the final act is the Governor. From his first appearance he seemed like a bit of an asshole, in that he's blindingly trusting of Strangers, and too quick to chop off heads, but once he realises the truth, he's much nicer. But then in the last half hour he suddenly becomes a real creep. Feeling that his 9 wives aren't enough, he wants Baek for his own, and machinates to have her for himself. His lowest moment comes with his jawdropping quote of "I have 9 women already, but they're all stupid like bears and greedy like pigs. What's more, they're all very ugly and filthy". feels a little inconsistent having him be presented in such different ways.

The heavenly entourage are varied. The monk is a dick, always calling Baek a monster and a brute, insisting she's wicked, refusing to  help her, and even conspiring to turn her husband against. The female Buddha Gwaneumbosal is much more wise and sympathetic though, and it's nice that she's the one in charge. Something I found strange is that despite being gods, they aren't able to see what people are doing down on earth. 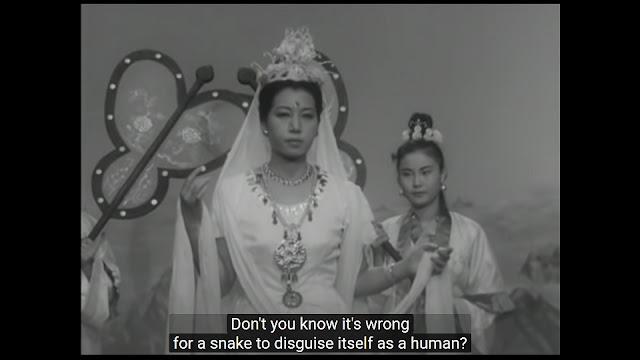 As well as telling a regular story of boy meets girl, girl turns out to be snake, boy and girl face difficulties, there seems to be some social commentary too, both on the brutality that the police can wield, and quack shamans, out to make a quick buck no matter how much hysteria they whip up or whose lives they ruin. It's quite well done I think, always feeling pointed and never forced (although the cops being mean in the second town is pushing it a bit).

The direction by Shin Sang-ok is pretty good, while the actors all do decent jobs. Some performances are a little weak, and others over-the--top, but nothing too bad, and the leads (Choi Eun-hee, Shin Seong-il, and Go Seon-ae) are all good. 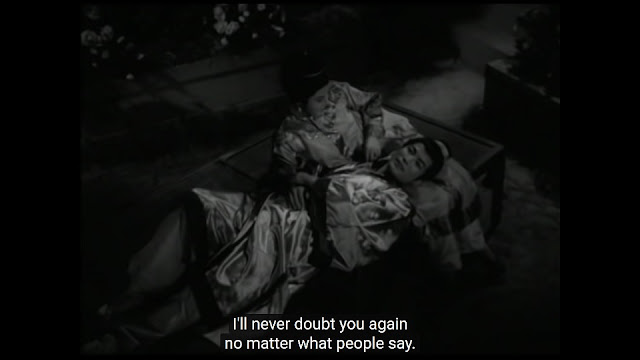 The music here is nice enough, and gets the job done. It's suitably dramatic, and the heavenly or magical scenes get the appropriate scoring, as do the romantic moments.

The effects are pretty decent in Madam White Snake. The titular snake is barely visible, and Baek is human for most of the film, disappointingly enough. The gods are presented well though, as is their cloudy domain. The flying is executed neatly too. It may look cheesy to some, but they move in a believable enough way, and there are never any visible strings. 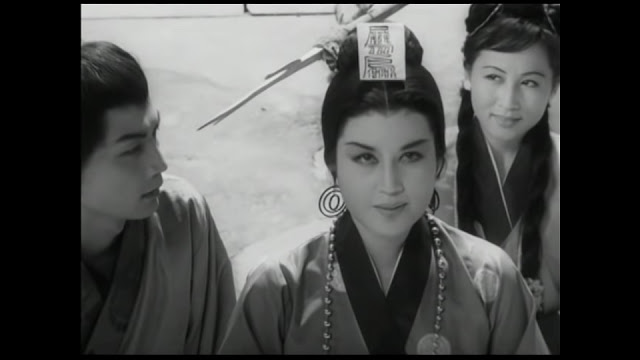 To finish, Madame White Snake is a pretty flawed but otherwise good supernatural romance. One can always rely on a Korean movie to entertain at least a little, and this is no exception. It may or may not be the best adaption of this old fable, but it's still a good one I feel...
Posted by Chris Hewson at 11:14 PM