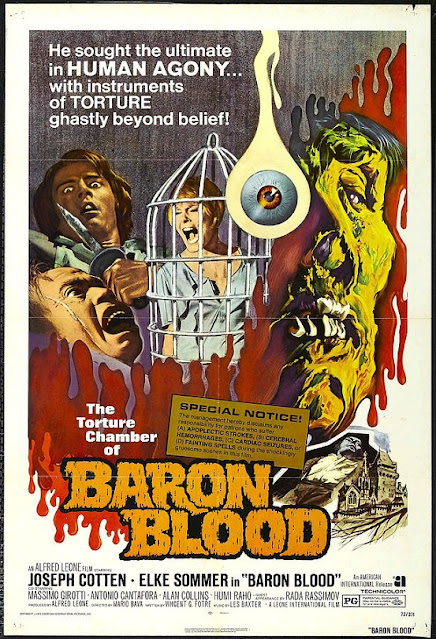 Baron Blood was my first exposure to the works of Mario Bava. I caught the first half hour on tv as a kid, late at night on SBS. Naturally the film was in a foreign language (German, if I recall correctly), with subtitles. I had great fun with its creepy atmosphere and moments. It's just a shame I was unable to stay up any longer to watch. I was able to, theoretically, but didn't want to push my luck in case I was discovered up past my bedtime watching gruesome horror movies. Now, many years later, I have finally seen the whole picture, and am eager to discuss... 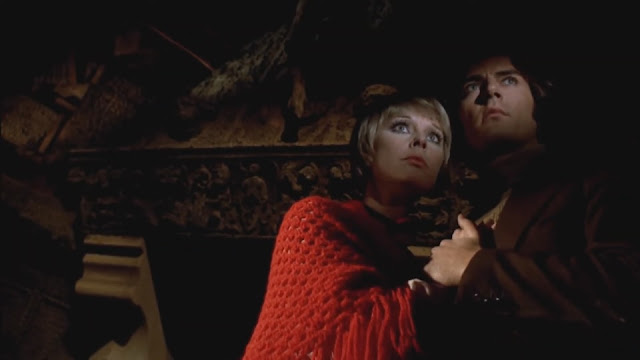 Peter Kleist arrives in his ancestral hometown in the German mountains, and is drawn to the Schloss des Teufels, castle of the infamous Otto von Kleist, aka Baron Blood. After making friends with Eva, the renovator for the property, Peter convinces her to help test out an old parchment he found, which will supposedly resurrect his bloodthirsty ancestor. The spell unfortunately works too well, and a gust of wind sends the spell onto a fire. Now the Baron is once again alive, and free to bring torture and murder to the land...
Baron Blood is a wonderfully spooky horror. You wouldn't actually know to start with, since the film begins in such a cheery way. Lighthearted music, a brightly lit airport, friendly locals, and nice European vistas. Sure enough though the movie does eventually adopt a fitting tone. It may take things a little slowly in that regard, but only to pace itself, and build up anticipation. 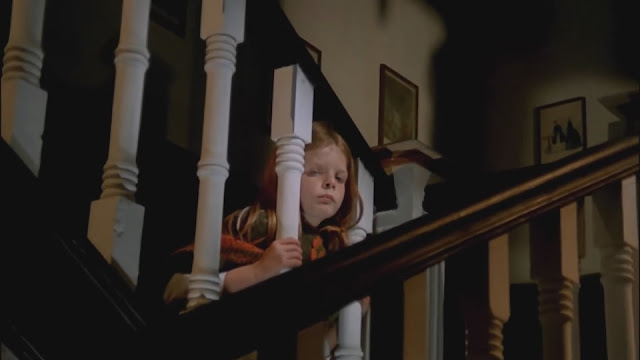 The film is a nice length, although the Baron getting two resurrection scenes felt pointless, just there to fill time. They could've been combined, and the movie wouldn't lose anything. That aside, there's never really a lot wrong with the story, and when the bodies start piling up, they do so quite quickly! And lastly, the climax is fun. The villain was diabolical, the torture dungeon was spooky, and the heroes were lucky!
The setting is great, and shooting on location really pays off. The 'Castle of the Devils' is grand, Gothic, and as the characters say it's only $600,000 dollars (including the dungeons)! I wish I could find myself a castle to buy for that much! The spookier the better! 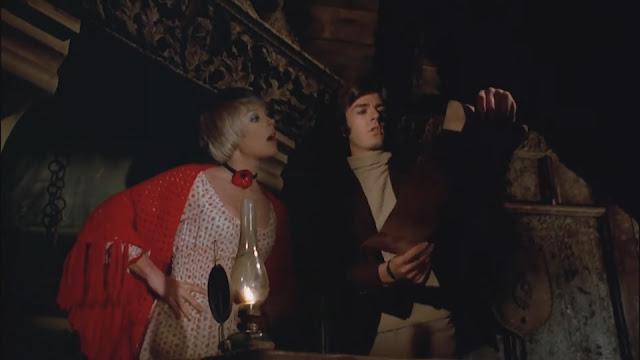 Peter is a traditional friendly and good looking protagonist, and the exact opposite of his ancestor. Eva is likewise nice, and has a good relationship with Peter. Imagine that, doing up the castle of a bloodthirsty madman, then becoming friends and falling for his handsome descendant. She's mostly smart, though has moments of stupidity, like when she's asked if she wants to stay on her own, and only 5 seconds after saying "Yes, I'll be fine, don't worry", ends up on the run from an undead killer.
While these two are generally likeable, they both suffer from one fairly sizable problem-They are assholes! Their careless decision to resurrect a bloodthirsty madman out of curiosity results in the deaths of at least 7 people!
The psychic who briefly offers help for the gang ("I won't help, I won't I won't I won't!...Ok, I will.") is an interesting character. She does get uppity about these guys for bringing the Baron back to life, and yeah it is totally their fault, but it was your innocent witch who wrote the incantation that resurrected him! Thankfully the witch's spirit is happier about it. She bloody better be! As for the psychic, her end is a bit un-proactive. Just get in your car and drive, dumbass! 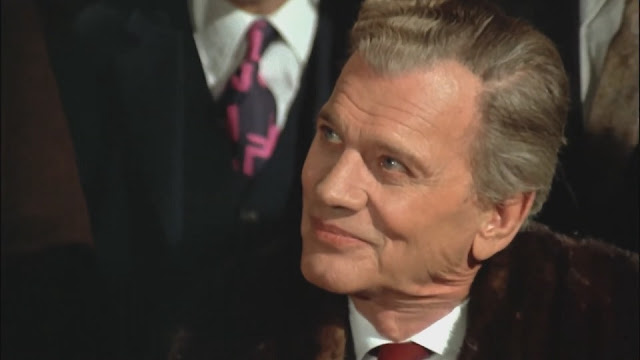 Next up is the titular Baron. He's an effective villain, violent and homicidal, but in control enough to make plans, and appear suave and well-adjusted when need be. He has a good rapport with his descendant, and is sorry to have to kill him, though will do so happily. As the film trundled along I wondered why the heroes didn't just kill him normally, if the parchment is burned, unless the witch saw fit to curse the Baron with immortality. That is indeed the case, and we see first hand a conventional attempt at killing him.
The castle's creepy manservant Fritz (it was either that or Igor) is a neat presence during the movie's third act. He dies surprisingly quickly after the Baron's resurrection, but I suppose that's ok. After all, you don't need a guy playing scary pranks when you've got the genuine article wandering about. 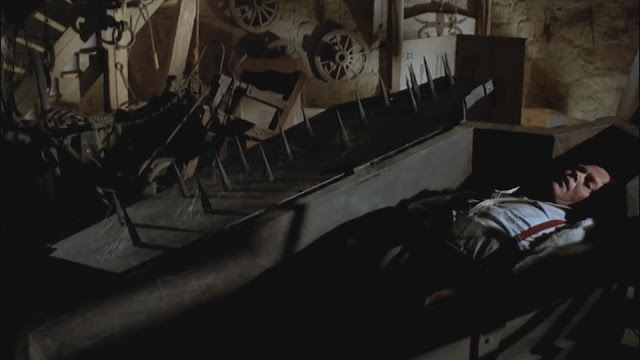 Peter's uncle Professor Hummel is a decent supporting character. His daughter Gretchen is one of the film's more enigmatic characters. She knows more than she could, and listens in on conversations from afar, like she's planning something. She's also adorable!
Overall the story here is satisfactory. There is one area I feel the plot does disappoint a little in though. The character of Gretchen is a spooky little girl, with some strange habits, and she knows things she couldn't possible know, such as what the Baron looked like without ever having seen his portrait (something the film makes a point to specify). As a kid, I thought maybe she was a reincarnation of the witch who cursed the Baron, and would play a part in his downfall during the climax. She's even a redhead like her! But nothing comes of this, which is a shame. It could've been cool!
There were a couple of other loose ends that left me wondering, such as what the police will do with the investigation after the end. They naturally didn't believe in fairy stories, and I  especially doubt they'll be inclined to now that the Baron's dead again. Maybe the non-existent millionaire Joseph Becker will cop the blame? Though I have an amusing mental image of the heroes explaining to the police just how he died. 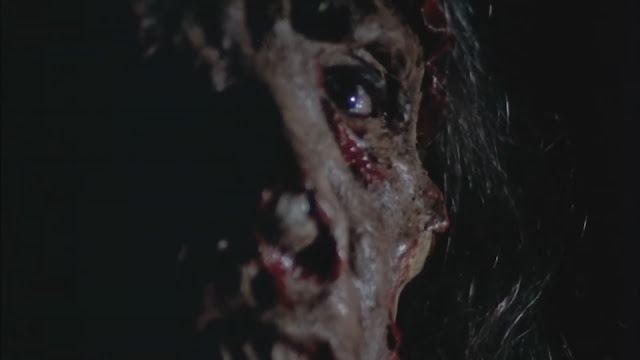 The effects work in Baron Blood isn't as prominent as other films, but what there is is great! The violence isn't gory, and perhaps not bloody enough to live up to the title, but there's certainly enough of a body count. The Baron himself is a grisly sight, and he's kept in the shadows just enough. We see him enough to creep us out, but not so much that he loses all impact. There are some other good moments too, like the ending sequence.
The acting here is all good. The English dub is cheesy, but amusing. Antonio Cantafora and Elke Sommer are good leads, while Joseph Cotton is nice as the human Baron, acting both suave and friendly, and intense. I wonder if he was under all the make-up! Probably not, but it'd be fun if he was. The rest of the cast is fine, including the lovely Nicoletta Elmi, who delivers a really neat performance as she puts yet another horror film on her stellar resume. 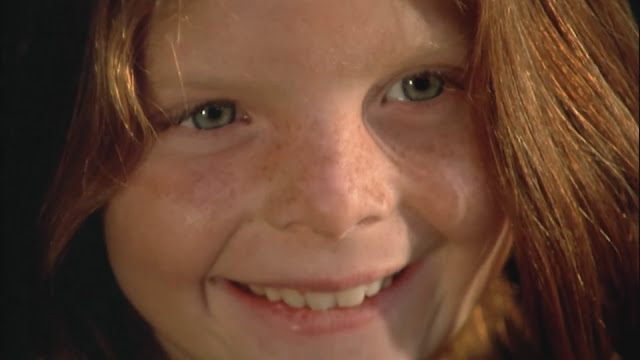 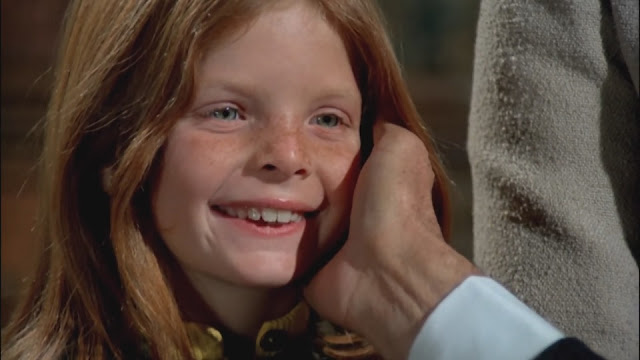 The score is a mix of different styles. You've got lighthearted and happy tunes, like it's an episode of The Saint or something. Can the kindhearted romantic Baron Blood find love in Italy? Or will his heart wither and die, like so many of his victims? But when the movie buckles down, it has plenty of tense and atmospheric tracks. 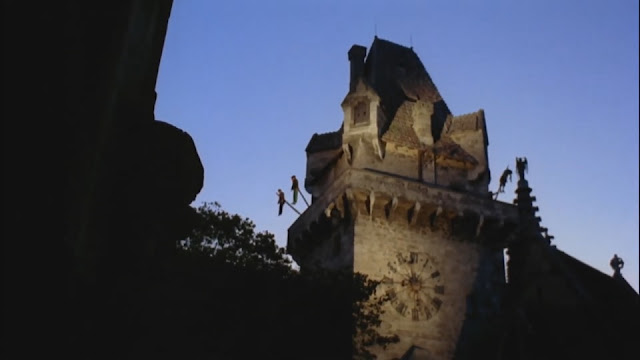 Baron Blood isn't a masterpiece or anything, but it does a really good job being what it is-A traditional low-key horror film, with all the tropes you'd want. It's fun to watch on a spooky night in, and is a great horror to introduce kids to the genre with. Might they be scared out of their wits? Perhaps, but kids can be a hardy bunch. After all, look how I discovered the movie!...
Posted by Chris at 8:22 AM