Silent cinema has given many famous films to the world. Perhaps none moreso than 1922's Nosferatu. The horror genre was one that flourished in the silent era, and many of the most iconic coming from Germany, with classics such as The Cabinet of Dr. Caligari, and today's film... 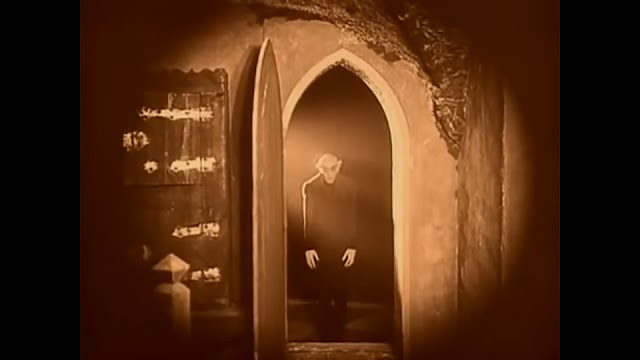 Thomas Hutter is a real estate agent travelling to the wild mountains of Transylvania, where the locals shudder in fear at the mention of Count Orlok. He is cordial with the count at first, but soon repulsed when he is attacked in the night, and witnesses terrifying supernatural events. Desperate to escape, he makes a mad dash through the mountains, having unwittingly aided the vampire in his plan to reach a new world... 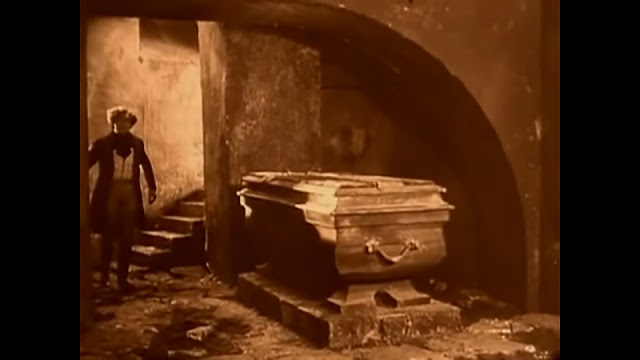 Nosferatu: A Symphony of Horror is a genre classic, delivering simple but effective Gothic horror to its audiences. While some modern people have a mental image of silent films being primitive and dull, this proves them wrong with its dynamic moments and fantastic imagery.
The film is a loose adaption of Dracula. It brings many of the book's famous moments to screen, and each character has an analogue to the book. But much of the 500 page book is omitted, along with half the cast. There's not even a Van Helsing. Nosferatu is very economical, combining Mina and Lucy into one, connecting Hutter (Johnathan Harker) and Knock (Renfield) together, etc. In some ways this works, though others not so much. 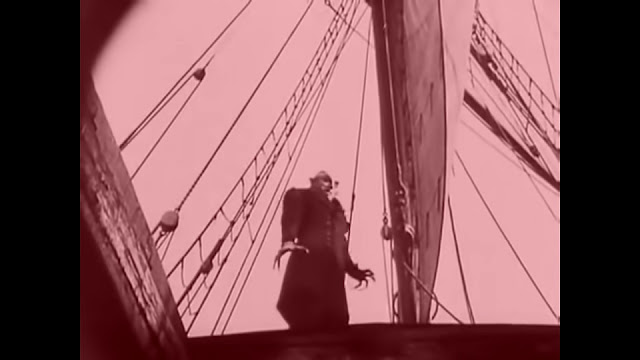 One problem is that it takes pretty much the whole movie for the plot to just get started. Also, combining Mina and Lucy into one character has the adverse effect of leaving the first major death to the very end of the film. It does also end the movie on a bit of a bloody downer! 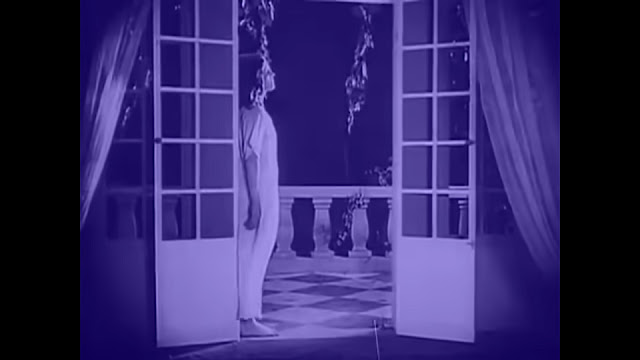 Nosferatu added much to the vampire mythos. It is famous for showing a vampire that is disgusting and animalistic, like a human rat, instead of a more handsome and suave bloodsucker. This film is also singlehandedly responsible for introducing the idea that vampires are destroyed by daylight. Something not present in the book, but forevermore such a popular trope that we just assume it's ancient mythology. 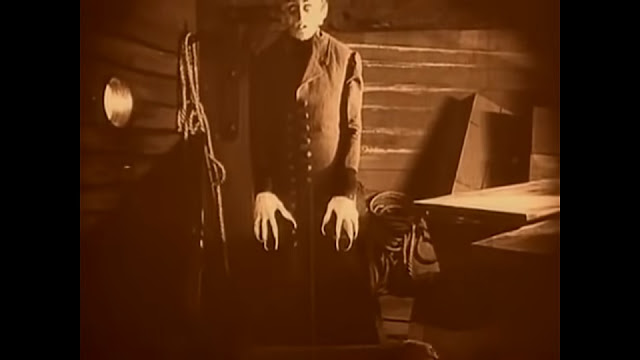 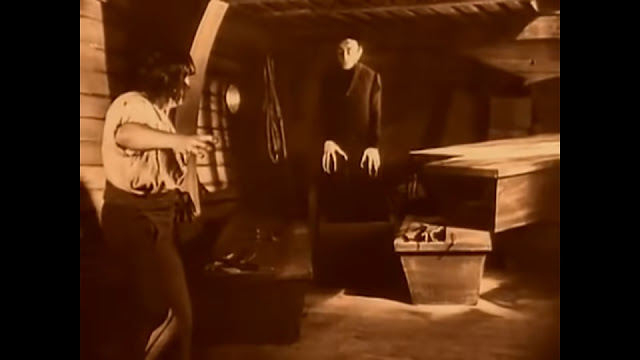 While predominately a classical vampire tale, Nosferatu contains some surprisingly modern-thinking moments! You expect a film like this to be very traditional, but there are brief moments where characters compare vampires to creatures like mosquitos, certain squids, and parasites. It's a small but interesting scene.
One of the more interesting things about Nosferatu is the plague element. Something only hinted at in the book, if that, is brought to full focus here, with ominous moments of fear and contagion as Count Orlok's plague rats threaten to spread death, and his killings are thought to be victims of disease. This creates a nice sense of foreboding. 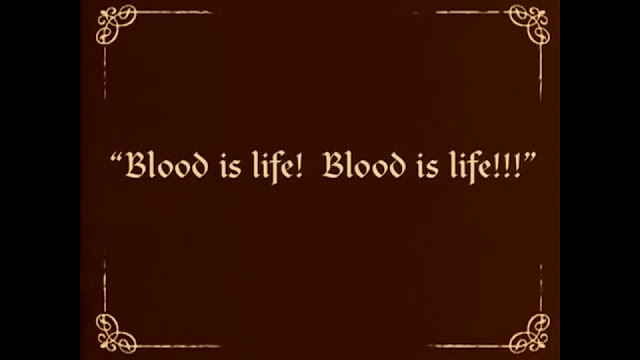 The cast here give good performances, with the leads all doing well, and a few making for entertaining madmen. It's the theatrical Max Schreck who has an iconic status, with the make-up used so spooky and convincing that people have long since had fun by claiming he was really a vampire, or another actor in disguise.
The direction by F.W. Murnau is legendary. Overall the film is shot very well, from the big scary setpieces, to the quieter 'little' moments. The film's use of shadow in particular has become famous, and gives us one of cinema's most iconic images. Nosferatu also makes use of fast motion photography to show Orlok's abilities, which gives a supernatural edge that is only a little silly. The locations are very good, with a nice mix of sets and locations. And the movie is one that tinting really adds too, with its use of yellows and deep purples (though it still looks grand in black and white). 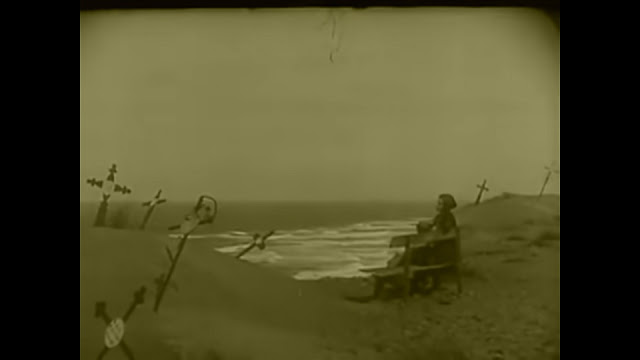 It's the connection to Bram Stoker's classic book that caused a lot of trouble for Nosferatu. While in the public domain now, the book was still under copyright in 1922, and Stoker's widow made damn sure no-one else took advantage. One can understand her, and it's only in hindsight that we can truly understand how important this film is, but, I am still pissed off at Florence Stoker for being so overzealous and mean! She and her lawyers almost eradicated Nosferatu from the face of the earth, depriving cinema of one of its greatest accomplishments. Luckily it survived, where so many other films didn't, and we can still enjoy it today, nearly 100 years later. 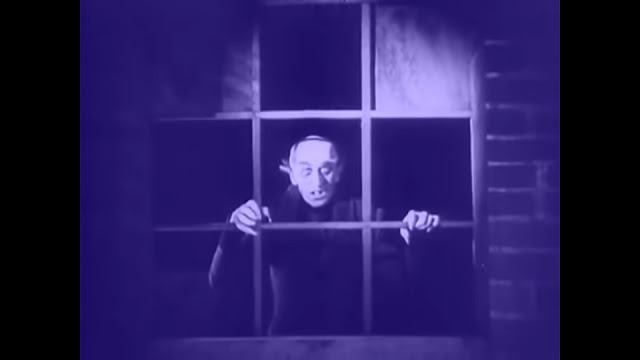 Nosferatu: A Symphony of Horror will forever be a classic of world cinema, and a shining example of the achievements horror can pull off, no matter what some stuffed-shirts might say. If you're a fan of vampires, you owe it to yourself to check this out as soon as you can...
Posted by Chris at 1:36 AM