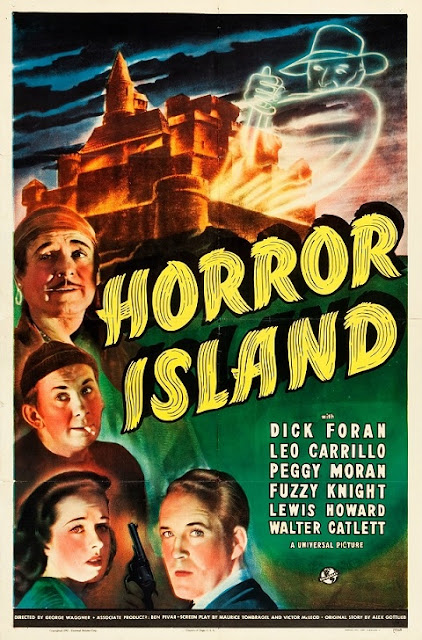 Bill Martin is a struggling business owner in a small Florida fishing port, always up for a new money-making scheme. When an eccentric Spanish sailor presents him with a map leading to a treasure, on the seemingly useless island Bill owns, he jumps at the idea, despite a mysterious Phantom stealing half the map. Bill organises a commercial treasure hunt on the island, so that even if the treasure isn't real he can at least make a few bucks. But as they arrive, guests begin mysteriously dying, as the unseen Phantom gets closer to the pirate's gold... 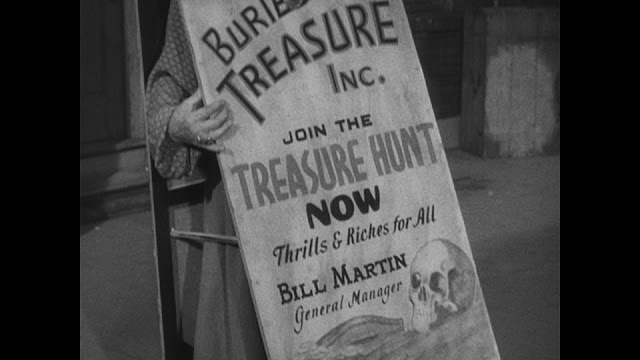 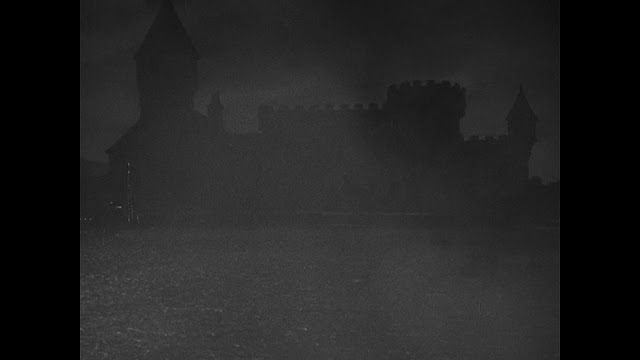 Horror Island is an enjoyable spooky little mystery. Despite the title's promises, it's a fairly lighthearted affair, with irreverent characters, funny dialogue, and a laidback tone. Still, you can't deny that it does live up to the title's claims. There is an island, and it does contain horror! It's just not in the least scary. 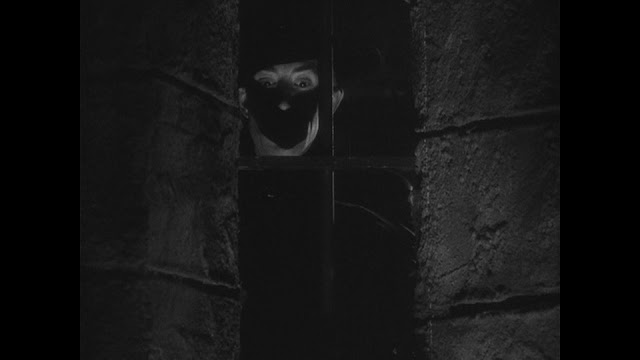 The plot is decent, and sets things up well, though the movie gets a little sidetracked with the whole horror hotel business, to the point that I forgot there was a real treasure. It also takes its sweet ass time, 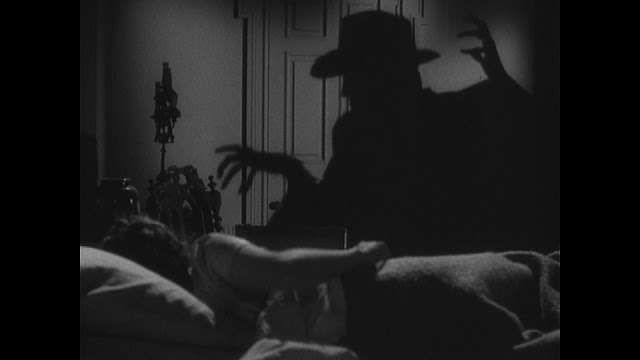 There are a few too many characters too, and by the time the movie has finally set up its relatively simple premise, we're already halfway through. This isn't helped by some of the characters looking alike. We have Bill and his comic relief sidekick Stuff, comic relief sailor Tobias Clump, the love interest and her bored cousin, two crooks, an excited professor, a suspicious but amiable sheriff, plus Bill's cousin! And this isn't even counting the Phantom roaming around. That's 10 characters in an hour long film! Could it be done? Sure. But here it's all a bit jumbled, and many of the characters aren't necessary, and could've been easily combined. 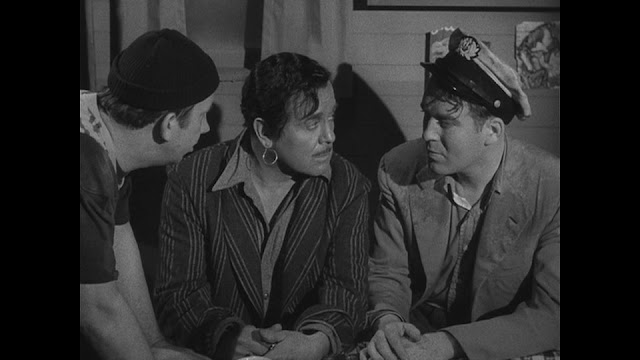 Bill is a likeable hero. He's a bit of a wastrel, full of hair brained schemes, always owing money, and afraid that every new person visiting his shop is there to break his legs (which you just know is gonna bit him in the back by the end). He shares decent chemistry with rich girl Wendy, who's spunky, and skeptical within reason. The comic relief characters all do their parts well, and are never annoying.
The crooks have a plan of their own, cut short by the guy Rod's murder. This doesn't upset his girl Arleen too much, as she was itching for a chance to get away from the brute. She is considered a suspect at first by the sheriff, but he soon realises she's ok. He trusts her with a loaded gun too! She thankfully gets a happy ending. Despite only us the audience knowing she's on the level, nobody else would realistically believe her, yet they all do, which is a relief. How Bill even knew her name though let alone her trouble with Rod is anyone's guess, but hey, it's a movie. 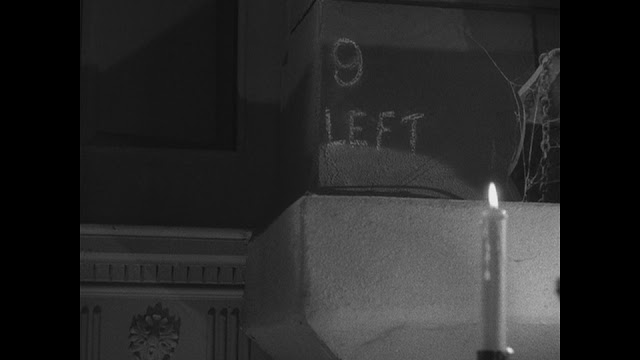 The villain's identity is strange, since we can openly see his face. It made me curious who he could be. There does turn out to be a great twist, and the killer puts up a fight despite his deceptive appearance. Although the reveal of the Phantom's identity was a letdown (Panama Pete? Really? You expect a shadowy villain to have a more threatening name than that!). There are some other obvious red herrings, which keep the plot going, and thankfully obvious culprit Cousin George, only character in the film with a motive, did not turn out to be the killer. Imagine that, if the guy who openly wanted the treasure was the killer all along.
The villain's death is hilarious, not only because of his idiocy, but also the violence promised by the movie, only to be dispelled when we see him totally unmarked despite being cleaved by a huge axe. 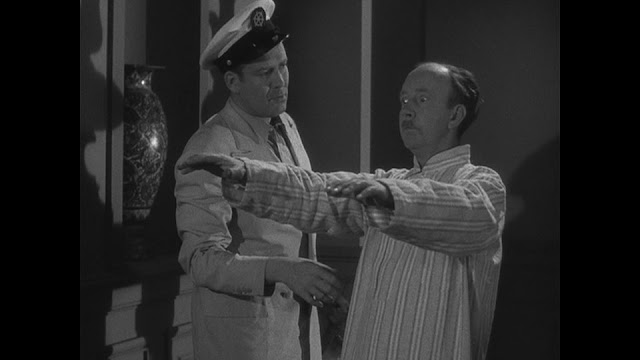 The dialogue is full of fun quips, from one comment about a ghost with muscles, to the 'funnier and quieter' bit, and other amusing lines.
"I thought so, a man driver!"
"If that wasn't the wind, don't do it again!"
"Is this party goin' on all night? Radio's playing and dames screamin'."
And "What are you all complaining about? This is exciting! It's adventure! Imagine-Lost at sea, on the way to a haunted island, with a ghost castle. Well, one of us might even be murdered! " 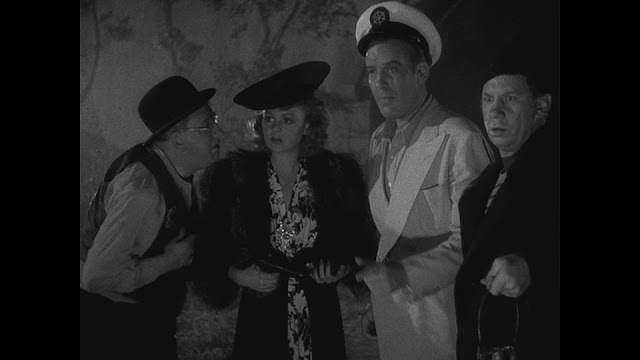 Dick Foran is a reliable lead, as is Peggy Moran, the two reuniting after their turn together in The Mummy's Hand. Fuzzy Knight is a decent enough comic relief, and the same can be said of Leo Carrillo. He has a funny accent, but talks a bit too fast sometimes, making me glad my DVD had subtitles. The rest of the cast does well, including the awesomely named Hobart Cavanaugh, and the sarcastic Lewis Howard. One treat was a fun actress playing a supporting character. It looked like she had a smaller face, but I could've sworn it sounded just like Iris Adrian's voice. And sure enough, that's who it is! I'm glad she always got juicy roles. 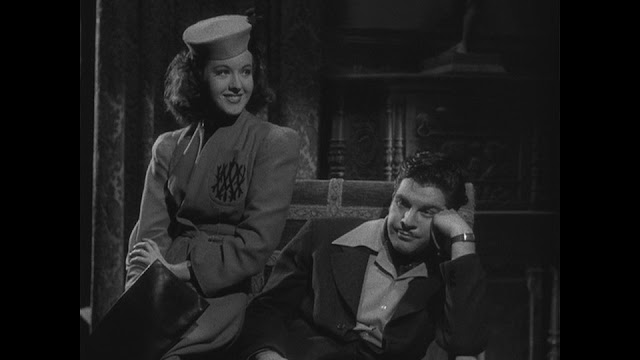 The direction here is fairly standard, with many neat shots, which give off a nice spooky vibe, akin to being in a haunted house ride. For this reason I think this is a perfect movie to introduce young kids to the horror genre!
Horror Island is a pretty fun movie, and good example of 1940s comedy-horror. It's not the best in the genre or era, but certainly a fun watch...
Posted by Chris at 8:07 AM