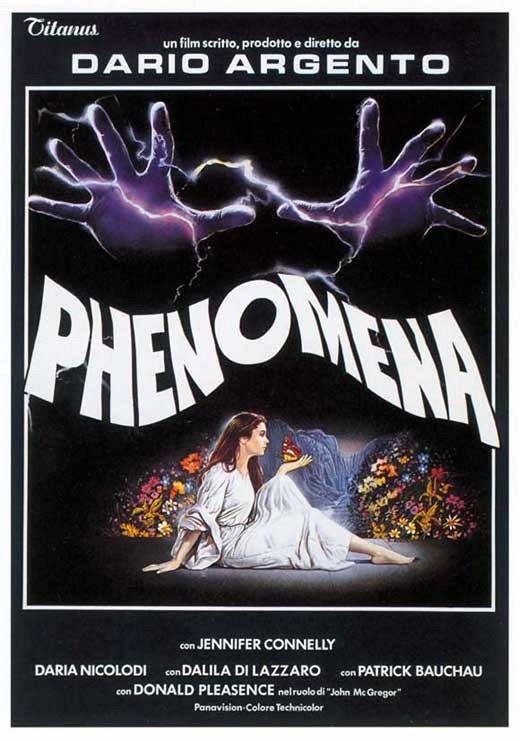 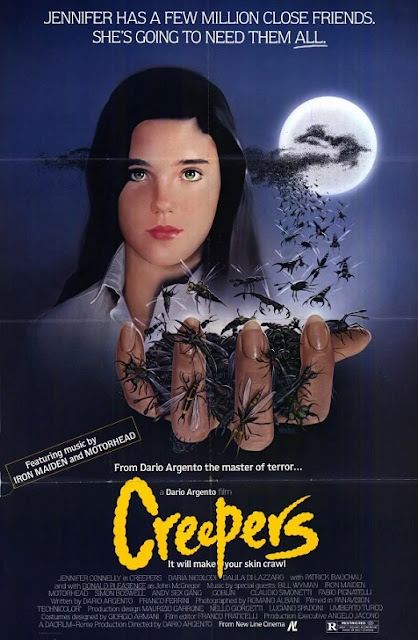 Jennifer Corvino is a teenage girl sent to a boarding school in Switzerland, where she soon finds herself in serious trouble. A murderer is on the loose, and her mysterious sleepwalking gets her into trouble with the teachers and makes her a target of ridicule by fellow students. The only person to take her seriously is entomologist John McGregor, who theorises that Jennifer might have a special gift for communicating with insects, and can use it to find the murderer before she's the next victim... 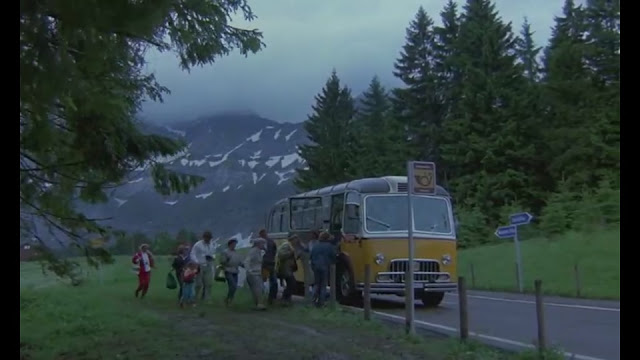 Phenomena was one of Italian director Dario Argento's lesser known films, and not held in as high regard as classics such as Suspiria or Deep Red. Over the years though it's built up a cult following, and praise in retrospect, with Argento himself considering it one of his favourite works. My opinion regarding Phenomena is somewhere in the middle. It's by no means bad, not like Argento's films after the 80s, but there are a few elements holding it back from being a true classic for me.
The story is decent, but the pacing is a bit slow, and time is wasted on things that don't end up amounting to much (such as Jennifer's hunt for a phone). All of this results in a pretty simple horror flick that's just shy of 2 hours! 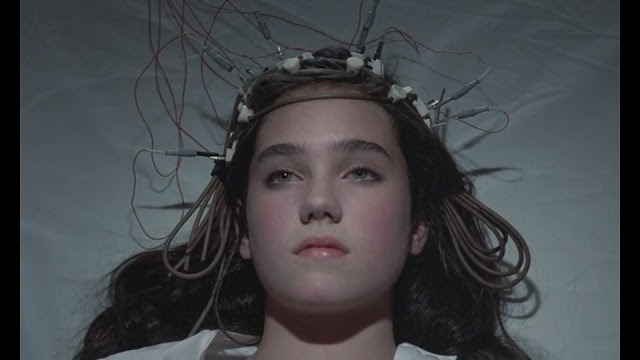 The setting is underused. It's a great location, and there's lots of potential. It's also an atmospheric place, as Jennifer walks through these dark academy halls, where the students are terrors and a killer could be lurking behind every corner. Unfortunately the movie seems to lose interest less than halfway through, and Jennifer runs away and never returns. The last couple of acts suffer a little for not having a consistent location. It's never confusing, but a bit harder to get attached.
No effort is made to have the other girls be sympathetic, even remotely. They are bitches! In some ways this is effective, though the movie does go a touch overboard  Not to the point where is breaches plausibility, but still. This culminates in a spectacular scene where Jennifer shows why you shouldn't bully a girl with telepathic control over insects. 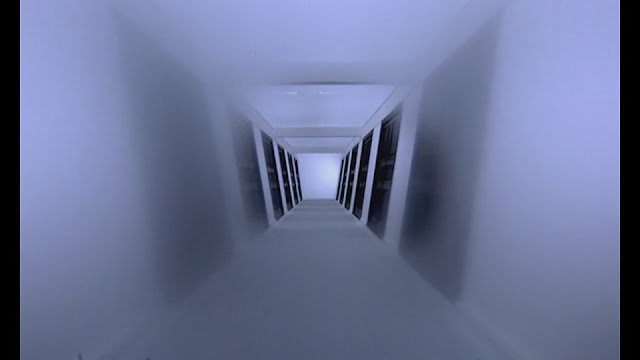 The mystery in Phenomena is seriously lacking. Throughout the film we get zero suspects and no clues. It takes an hour into the film before Jennifer finds the creepy murder old house, and this doesn't amount to much. By the time we do find out who the killer is, your reaction is likely to be "...Them? Do I know them? Oh yeah, they were in the background of a couple of scenes". If the movie had've stayed at the school more, maybe it could've done a better job establishing her!
The climax is great fun, with a big lakeside fight, an explosion, and an army of insects. Really all you need. This leads in to a decent but flawed ending. I didn't like the death at the end though. It felt like a shock just for the sake of a shock, and needlessly tormenting Jennifer after an acceptable point. This poor girl has suffered so much, but now she's finally taken control and beaten the baddies! Then the movie goes ahead and snuffs out her last surviving friend. It's not the event that I would necessarily mind, but more how it's done, and when in the story. With only 1 minute left, it has no staying power for me, especially since the killer should logically already be dead, and the big final showdown on the lake is done. What follows this however is a pretty spectacular villain demise. Certainly unique, and bound to get a chuckle from you. 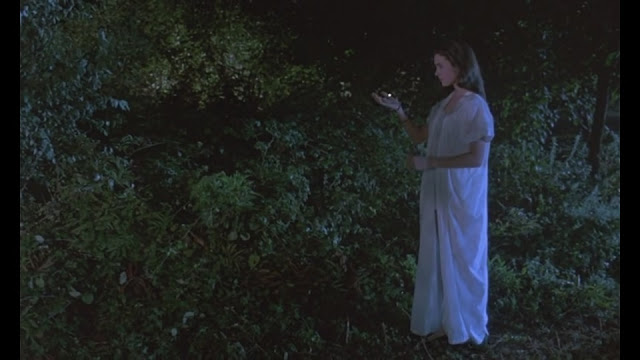 Jennifer is a good protagonist. Smart, proactive, and up for a challenge! She might be scared out of her mind, but when stuff needs to be done, she's first in line to go do it, with the help of her insect friends.
What makes the movie unique and interesting is its positive portrayal of insects. It shows them in a very good light, extols their talents, and manages to make sweet without cute-ifying them.
Dr. McGregor is a good mentor character. Smart, likeable, and the only person in the film who actually helps Jennifer. He's a lovely presence and gives the film some emotion. 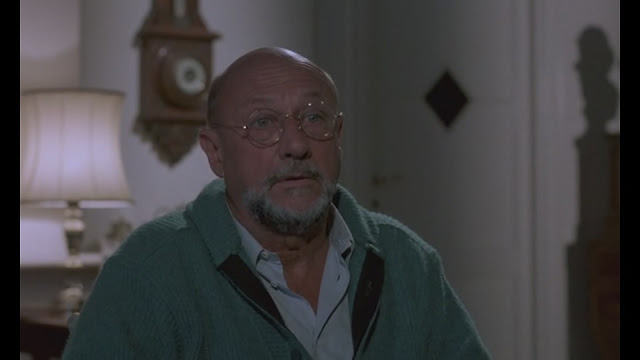 Jennifer's roommate and only friend at the school Sophie is alright, but dies before we really get to know her. None of the other girls leave much of an impression either, nor do the teachers. They're completely absent from the story after the halfway mark, feeling like a missed opportunity.
Inspector Geiger doesn't appear enough for us to really get to know him, which is a shame considering how major his role suddenly becomes in the last act. The poor guy has one heck of a trying time!
Now for the villain of the piece. Who the killer even is is a point of confusion. I assumed it was X, but other places say it's the son. He only plays a role in the climax, and it is great, though has some amusingly silly moments. When Jennifer finds him during her escape, she  tender, until she gets a look at his face, and immediately runs away screaming. Wow, what if he really was just a disabled child! You're mean, Jennifer! At no point does the movie say he is a killer, and while he'd have to be 15, he's like a 3 foot tall and looks like a toddler! Yet Jennifer assumes he's a powerful killer, and since this is a horror film she's proven correct. 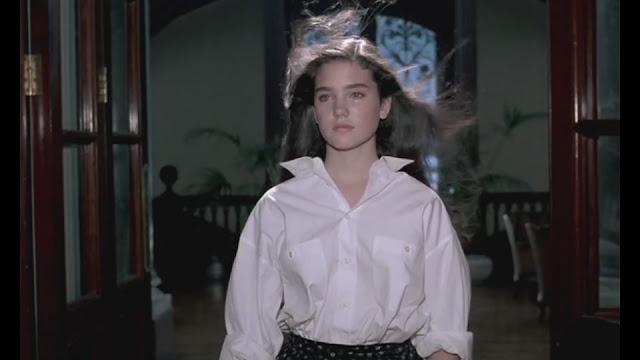 Jennifer Connelly does a very good job, especially for her first leading role. Some moments are a little shakey, but overall she impresses, and this makes for a great companion piece to Labyrinth. Daria Nicolodi is almost unrecognisable, made up in such a way, then again in the final act. She does a really good job, and it's a surprisingly crazy turn. Donald Pleasence is great as the helpful doctor, and I was sad to see him go.
Some of the dubbing can get a bit creaky, but that's part of the charm. It was also great to see Kaspar Capparoni! I'm aware no-one else outside of Italy or Australia will recognise him, but it's great nonetheless! One last thing to mention is that some cuts of the movie shifts the dubbing to Italian at random, which is a little jarring, but amusing, not to mention fitting for a tri-lingual country like Switzerland. 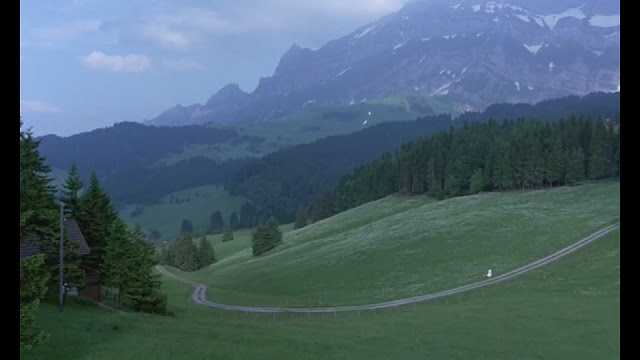 The soundtrack here has good and bad sides. Getting to the good first, there are some really effective ambient tracks, which really make for a spooky watch, and go hand-in-hand with the beauty and coldness of this forbidding location. The main track is a grand orchestral one, that sells the emotion of the moment. Unfortunately it's repeated a fair bit, which is par for the course in an Italian movie, but this theme is so short and orchestrated so specifically that it's not as effective as tracks that use a lower-key repetition (I hope I'm making sense).
As for the bad, half the score is comprised of heavy metal. Good songs if you're a fan, but boy do they kill the mood! Trying to have a tense or sombre scene when some thrash singer is going "YEAH, PUT THE PEDAL TO THE METAL AND ROCK TILL YOU DIE!". It even threatens to drown out important exposition in one scene. 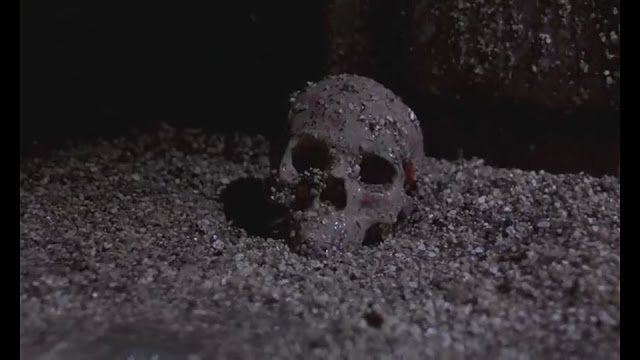 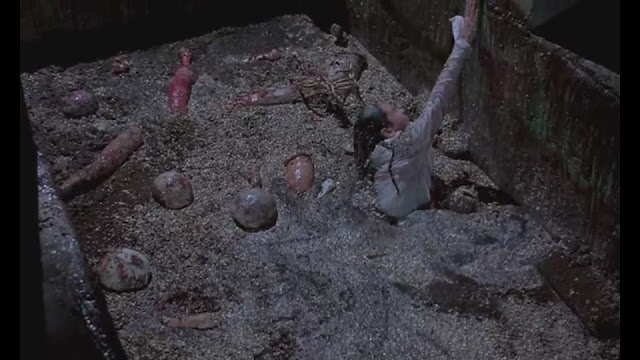 Phenomena is one of Argento's less gory movies. There's a little violence throughout, but never too intense. The death scenes often cut away before anything is shown. Where it picks up is in the last act, with quite a few gruesome deaths and visages. The corpse pit has become on of the film's most memorable and gross moments. My favourite death scene is probably the one that begins the movie, with its great use of slow motion.
The effects are great. The violence is (almost) always convincing, even if a decapitation later on has me rolling with laughter every time. The decomposed body parts look great too, with maggots giving authenticity to the props. The make-up is also fantastic, with one character in particular who shocks and impresses.
Lastly, Argento's direction is superb. The film makes use of naturalistic lighting, and has a few ethereal moments, lending an almost dreamlike quality to some scenes. My only complaint is how much he lingers on some shots. I swear you could cut this film down to 90 minutes if you trimmed all the awkward pauses in conversations, or the drawn out snooping. 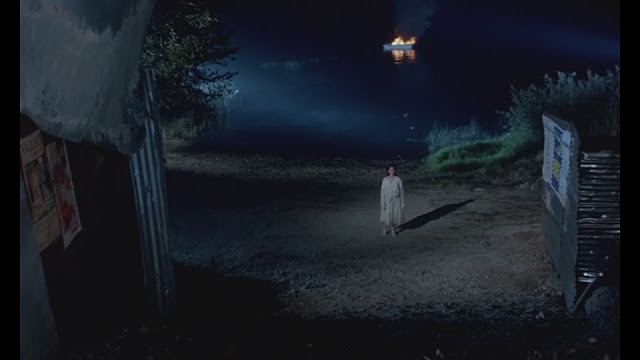 Despite its mixed reception upon release, this movie has left quite a legacy, including being the inspiration for Japanese horror game Clock Tower, which itself was a huge inspiration on that genre. So if you're a fan of games like Resident Evil and Silent Hill, you can owe at least a little towards Phenomena for getting the ball rolling.
Phenomena isn't a great movie for me, but it does have many great moments, and is a must-watch for fans of Italian horror. For every moment that'll have you scratching your head, there's two to make you gasp or grin...
Posted by Chris at 8:27 AM