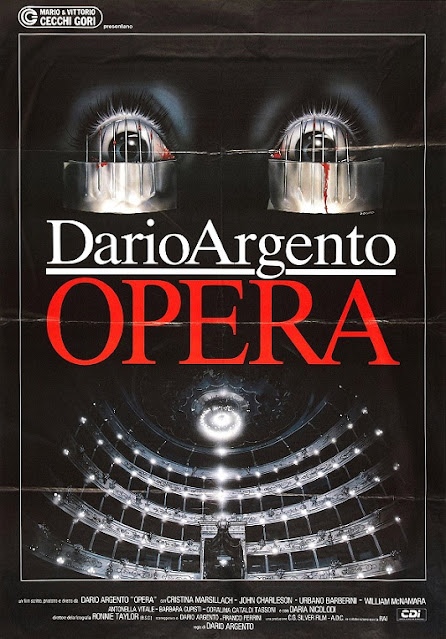 Betty is a young but talented opera singer, and due to a leading lady's accident, she is promoted to the starring role in a new production of Verdi's Macbeth. Betty is afraid of the curse often associated with the 'Scottish Play', and her fears soon come true when a mysterious killer briefly kidnaps her and forces her to watch as he kills those close to her. While he police search, Betty teams up with director Marco to uncover the killer's identity before it's too late... 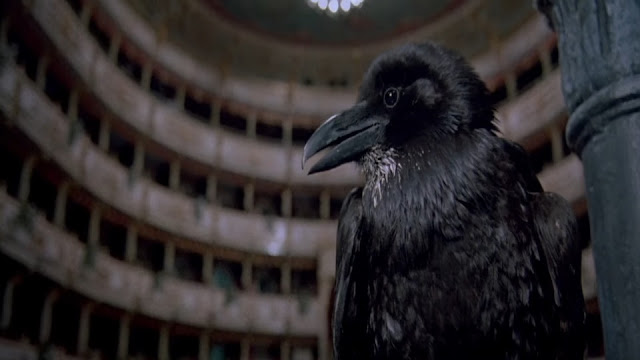 Opera is considered to be the last great Argento film, and was also the last thing he made in the 80s. It's not perfect, but is an enjoyable enough horror, and delivers enough of the good stuff for anyone just wanting a fun distraction. Despite being almost 2 hours, the movie goes at a fairly speedy pace. It takes too long for things to happen, but you don't notice, if that makes any sense. There is some truly iconic imagery here, =.
The story itself is one of the weaker elements of the film. The killer's backstory, and connection with Betty's mother is interesting! But the movie only really uses it as a vague backdrop, and it's never entirely clear why the killer abducts Betty, or why he kills these specific people. There are never any clues, nor even much in the way of suspects. The killer could only be Marco or Inspector Santini.
There are some neat setpieces here, with a highlight being the home invasion. Though it is a bit confusing. Was the real cop in the apartment all along or wasn't he? And the fact that the movie feels the need to namedrop officer Daniele Soavi's name a dozen times is just weird. Still, a fab scene, and one of many. 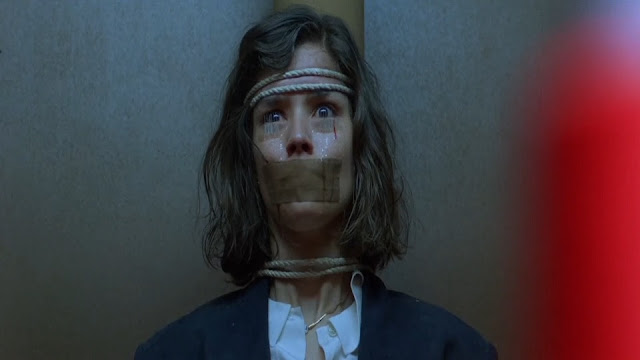 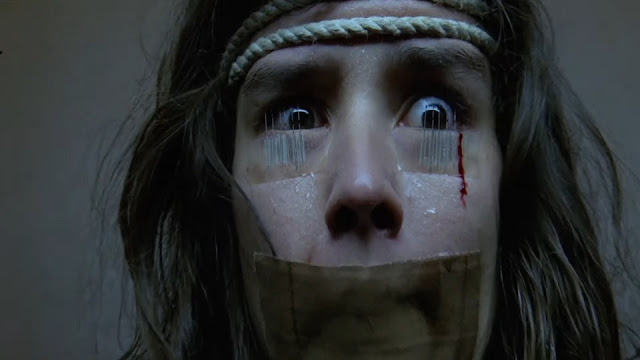 The characters are quite thin. Betty is ok, but there's not a lot to her. Her boyfriend is murdered almost immediately, and  not only do we never get to know him, he's never mentioned again. The poor bloke could've been anyone. Marco (or Mark, in the English dub) is the best, acting as a stand-in for Argento himself. He disappears for almost the entire midsection though. Then there's Inspector Santini, who's a pretty boring cop, having none of the charm of Tenebrae's police detective.
Giulia is a fun and slightly comical presence, though she also dies fairly quickly (well actually it takes nearly an hour, but it's a quick movie!). Betty's older friend Mira is similar. Decent, but a little underused. Betty also befriends a little girl halfway through, which comes totally out of nowhere but I liked her. She was everything our lead wasn't-Fun, proactive, likeable, etc. I felt bad that we last see her on a less than stellar note with her shitty mother, but thankfully we do see her again at the opera, so I guess things didn't go that badly. 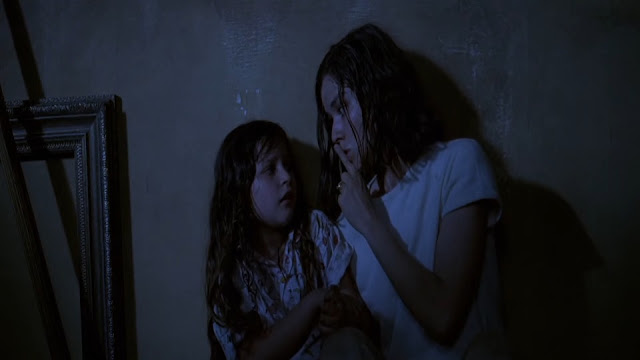 Where the movie really falls down is in the ending. The first climax is great! The crows play a huge part in events, uncovering the killer and pecking him up for good measure. Unfortunately Betty is the protagonist, not them, so the movie doesn't end then and there. Oh well. What follows is effective,, and the killer's 'final' act does feel consistent, even if our heroine is a bit of a lump.
It's after this when the film suddenly takes a change of scenery, to the rolling green hills of Switzerland. At first it just seems like an uncharacteristically long happy ending for Argento, until you realise there's still 10 minutes left! Things proceed to go pear-shaped, as we get a second climax, and a pitiful answer for how the killer even bloody survived! Then when the movie finally ends, it suddenly decides to go all avant-garde, leaving us on a bizarre note to finish on.
This ending is why Opera had a really hard time seeing a theatrical release in the U.S., due to the studio's insistence on removing these last 10 minutes, and Argento's refusal. It's not often when the meddling studio is correct and the defiant auteur wrong, but this is definitely one of them. If only the second ending was woven more organically into the story, it could've worked!  one thing that unites many of this movie's viewer's is the opinion that the ending is
Beyond the ending, the movie has other weird touches, like flashes to Betty's brain and other organs...I think. It's bizarre and never established, nor is it frequent enough to feel at home. Then there's the presentation of the first opera singer Mara, who is never actually seen. Scenes are instead from her point of view, or always holding her off-camera. 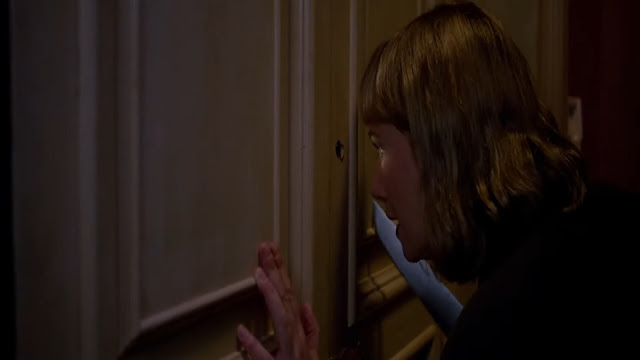 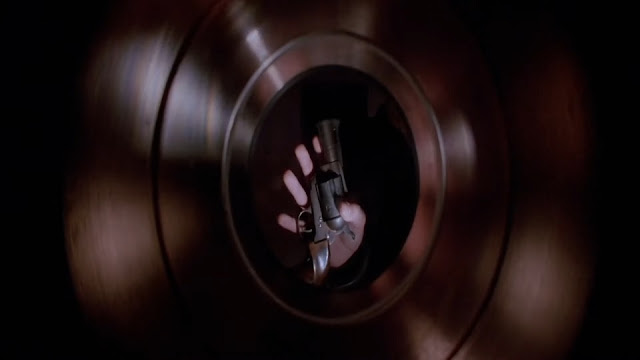 The film has an interesting connection to Phantom of the Opera. This serves not as a straight retelling of the novel, but more of a spiritual successor. Up-and-coming opera singer aided then tormented by a ghostly figure. These elements are there, but apparently Argento wasn't satisfied with just this, and made a proper adaption a few years later (much to the world's displeasure). There's also a Sound of Music connection at the end.
The acting in Opera is competent to decent. Christina Marsillach is a decent lead. Argento clashed with her on-set, some stories making it out to be more dramatic than it actually was, and overall she does a decent job, and enjoyed working on the film. The rest of the cast do decently, despite the sometimes spotty dubbing. Ian Charleson is a good male lead, and despite a real life car crash sidelining him from production for a while, he makes the most of his role, and leaves a good impression. Urbano Barabeni does ok as the killer, although isn't as good as in other films.
The soundtrack to Opera mirrors that of Phenomena, in that the majority is good, with some really beautiful tracks, but the action is spoiled by the frequent use of hard rock music. It's so bad that if you saw a death scene on its own, you might think someone's stuck a random song over it, and you'd be like "Ok, I get you like you like Motörhead, so do I, but can you play the real scene?". 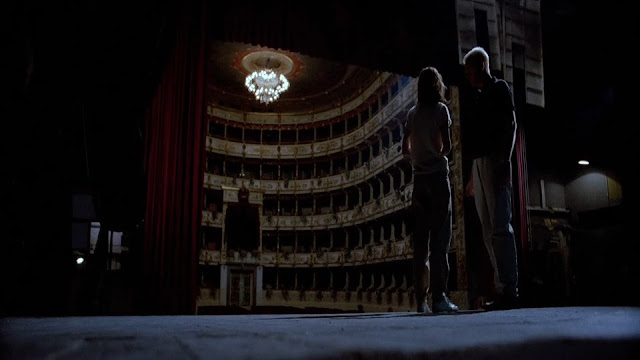 The effects by Sergio Stivaletti are very good, and gruesomely convincing, although I noticed the blood wasn't as jolly red as it usually is in Italian horror, and as a result it's never been my favourite example. It just feels like your run-of-the-mill gore you'd see in any random U.S. horror flick, as opposed to the artful violence the Italians usually did. Still, none of this should take away from how good they otherwise look. The deaths range from stabbings, to shooting, and more. I also really liked the touch with the bullet still traveling after killing its victim. Oftentimes movies just act like humans are bullet sponges, but here we see it keep going.
Opera looks gorgeous, with the opera house providing many great visuals, especially during the last act, where the camera sweeps through the audience, from a bird's point of view. The ending gives us some beautiful shots of the Swiss countryside. If Phenomena made Switzerland look creepy, this makes it look like your next holiday destination.
One last thing to mention is the strange credits. They begin with Written, Produced, and Directed by Dario Argento, followed a little later by 'Screenplay by Dario Argento, then Based on an idea by Dario Argento, before finally ending with Directed by Dario Argento. Geez, giving yourself a bit of a bit of a pat of the back there, aren't you? 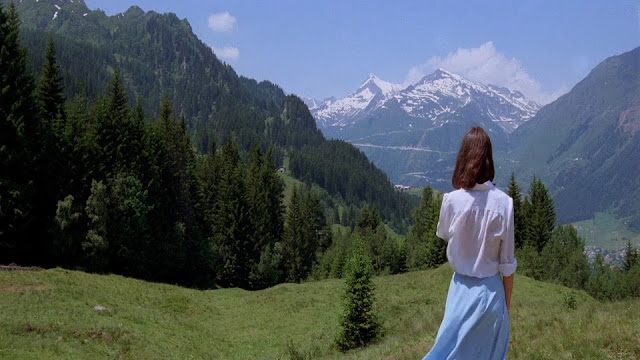 Opera represents Dario Argento's skills at their decline, but while there's much to dislike, there's also a lot to appreciate here, and you can definitely see why it's still managed to build up a solid fanbase over the years...
Posted by Chris at 8:28 AM