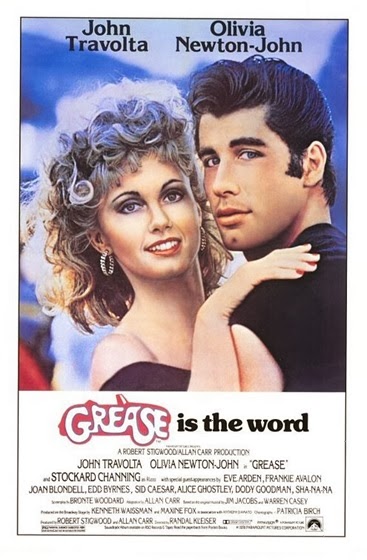 Ah, Grease! One of the most famous musicals of all time!...Yeah, I don't like it that much.

Don't get me wrong. I don't hate the movie, or even think it's bad. I just don't gel to it. In fact, I think its sequel is better!

I really hope your reaction to that statement was "There was a Grease 2?!", and not "Ugh, Grease 2! I've heard that movie is awful!". As far as I'm concerned, the movie's a bit of an unsung musical classic! It's got fun characters, a good plot, some great, memorable songs, yet not only was it not given it's dues, it's considered to be one of the worst sequels ever made! What?! WHAT?!

As for Grease 2's failure, I can only guess that everyone just assumed it was shit because they probably viewed it as a cash-grab sequel that'd suck big-time, and so they avoided it in theatres, and when the negative reviews came in from film snobs everywhere, that clinched Grease 2's fate at the box office. Poor Grease 2. And poor Maxwell Caulfield's career. Don't worry Grease 2, I think you're kinda terrific*!

*Props if you get that!

Grease is about Danny Zuko (John Travolta), leader of the T-Birds, and Sandy (Olivia Newton-John), a new student from Australia, who joins up with the Pink Ladies. Danny and Sandy met and fell in love during the Summer, and when they're unexpectedly reunited, Danny acts like a tool, because he wants to maintain his reputation among his friends. Sandy is despondent, and Danny tries his best to get her back... 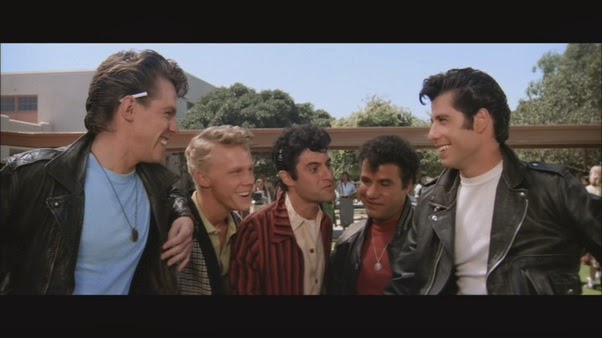 By far the biggest problem with Grease is the story. There really isn't one. The majority of the film is just 'stuff happens, with about ten minutes of a love story'. It's because of this that Grease isn't even in my top 10 favourite musicals list, and its sequel is.

Sandy really isn't in the movie a whole lot, but is an ok character*. Danny is a pretty unlikeable dick for the majority of the screentime, and add that to the fact that I don't particularly take to John Travolta, and you can see why I prefer the sequel over this.

*I'm glad that Olivia Newton-John used her real accent in this, rather than do what literally every other Australian actor in history besides Eric Bana in Funny People has done-put on an American accent. 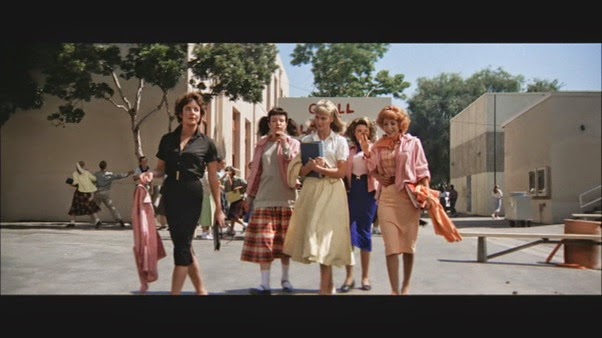 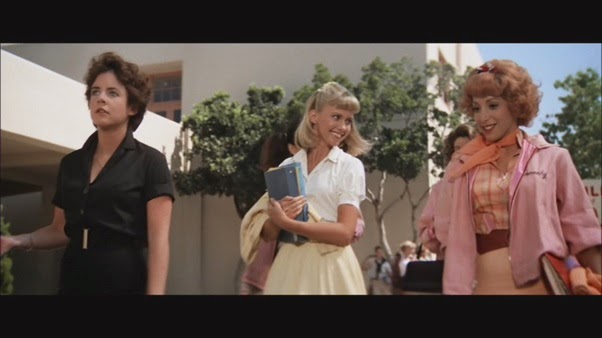 The T-Birds are all extremely annoying to start off, but they become tolerable as the movie goes on. As for the Pink Ladies, they're great fun! My favourite is Frenchy, Rizzo is well-written, Jan is adorable. And the, uh, other one is ok, I guess. I can't really remember her all that well.

Principal McGee and Blanche make for a funny duo, and I'm glad they returned for Grease 2.

The acting is all good. Travolta and Olivia Newton-John make fine leads, and the singing is pretty much all good (that is, excluding moments like Travolta's travolting opening verse to You're the One That I Want). 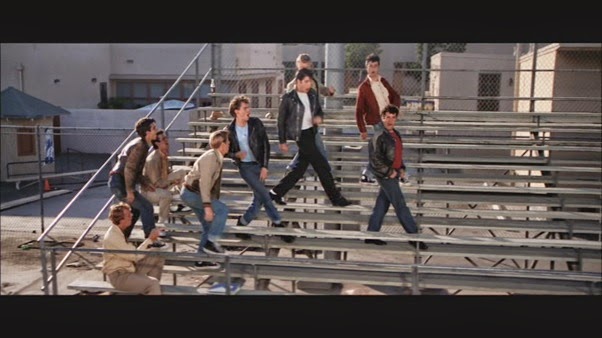 By the way, did you know that Frankie Avalon was the Beauty School Dropout guardian angel?! I didn't! I've got to get to watching some Frankie Avalon movies, stat! I should go watch Blood Song, or failing that, It's A Bikini World!...

The songs are all fine. Some I love (like Grease is the Word, and Summer Lovin'), and others I merely like. There aren't any that I hate, so that's a good thing. And while I don't love the majority of Grease's songs, they're at least very memorable.

I particularly like the song Sandy,  but there is some stupidity to it, as I'll mention a bit later. My main problem with Sandy is that it's too short. I really like the chorus, but it's only sung once (technically twice, but the first time is spoken verse to start off the song, so it's different). 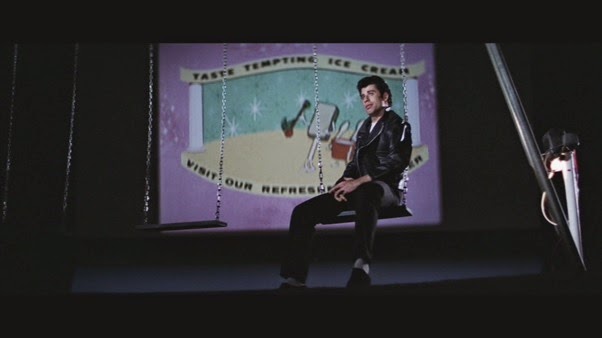 Is it just me, or does the Beauty School Dropout song (sung by who I can only assume is Random the angel from Happy Days) seem pretty judgemental towards Frenchie?

When it comes to You're the One That I Want, that line of the song isn't so much verbalised as it is slurred-"you'rthewathaahwa! Ohh, ooh, ooh!". Other than that, and what I mentioned before, it's a great song! 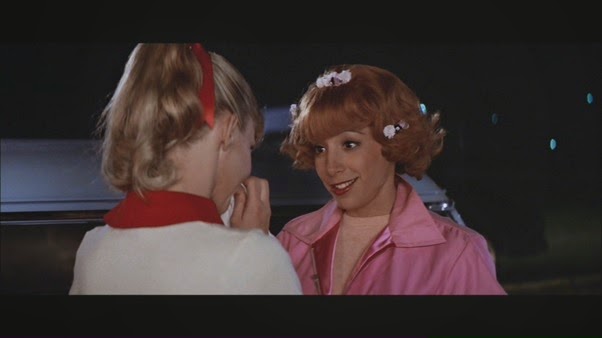 And when it comes to Summer Lovin' in recent years, there have been buzzkills complaining, saying how the "Did she put up a fight" line is rapey. No, it isn't. It's a figure of speech! I would explain how, but really, if you don't understand it, I am no teacher, so I can in no way be bothered to teach the obvious!

However, there is some slight rapey-ness in the film though...

Thankfully, Danny only forces himself on Sandy once. Why is that a good thing? Well I remembered it as being three times, so, good for Danny Zuko that he didn't do it that much. Bad for him that he did it, period. "I sit and wonder why-yi-yi oh why you left me, oh Sandy"-Um, maybe it's because you tried to rape her!

As for the ending (no, this is hardly spoiling anything. If you haven't seen Grease, but know of just one moment from it, then it's this one, for sure-no doubt about it), people complain about it, feeling that Sandy is totally overhauling her personality for her man. While that does seem to be the case, have the hate-filled complainers actually listened to the lyrics of You're the One That I Want?! They're about how Danny had better shape up, and prove that he's willing and able to change for Sandy just as she has for him! And if you really hate the ending so much, you could easily assume that she was just doing a fun act, and went back to her old self once the credits rolled. 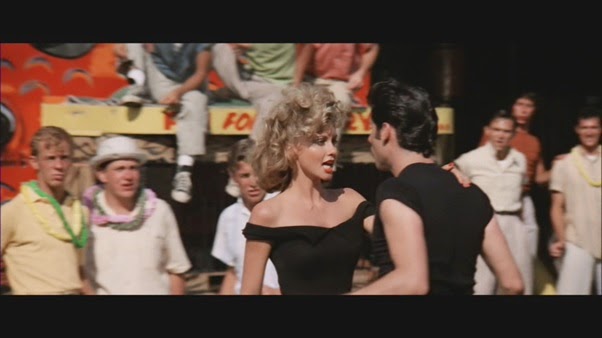 By the way, there is one distracting thing about this movie-the characters smoke. A lot! The "Come on, try one, it won't kill ya" line is hilarious in hindsight.

So, to finish, I do recommend Grease. While it isn't a movie I love, or even like a whole lot, I'd be willing to sit through it if a date wanted to watch it. Take from that what you will.

In some closing thoughts, if only there was a Grease 3. It could have been about Frenchy, and an older Dolores from the second movie. That would have been cool! Two of my favourite characters in the spotlight! Too bad that'll never happen...unless I'm willing to write fanfiction that is...
Posted by Chris Hewson at 10:02 AM