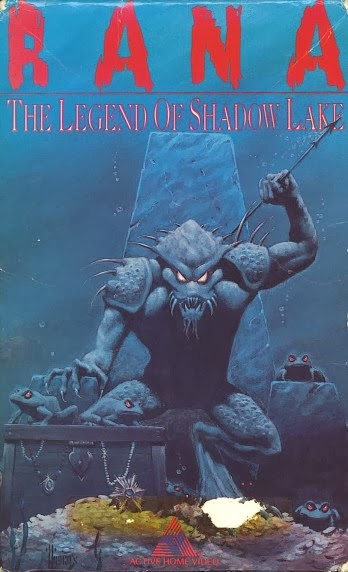 Rana was made by notorius filmmaker Bill Rebane, who's output consisted of stuff like Monster A-Go-Go, the horror movie starring Tiny Tim, and other various borefests, from what I've heard all over the interwebs. The film was distributed by sleaze-flick company Troma, and head Lloyd Kaufman considers this to be one of the five worst films Troma ever put out. If you've seen some of their output, then that statement should scare you. It didn't scare me though. Why? Because I've seen some of the most boring horror films ever made-I have a thick skin.

However, Rana: Legend of Shadow Lake surprised me. It's actually good! Nothing amazing, but it's a more-than-decent way of killing 90 minutes 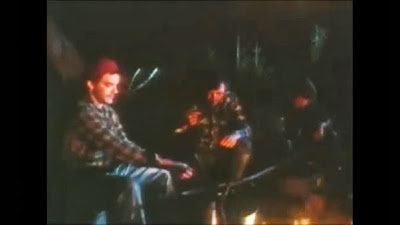 The movie is about Kelly, a guy who's returned to his childhood home-an isolated island-with his girlfriend in tow. He's there for a specific reason, and he tells his girlfriend Chris the nightmarish story of what happened on this abandoned island during his childhood...

The plot of this Rana is decent. It has slow buildup, yeah, but it's never boring.

The acting's here and there. Some is decent, some isn't as much, but none is terrible. 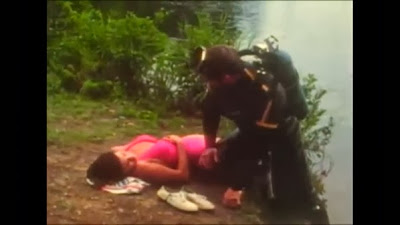 There is one almost poorly written moment, when the film returns to the present day for the first time. Kelly says a few things about kooky island inhabitant Old Charlie, which is fine, but then he goes on to say about how he had a crush on Susan, showed her around the island, and about her feeling that something was bad/wrong about the lake. SHOW, DON'T TELL! But then the movie switches back to the flashback story and shows just that, so it works out just fine.

The only real problem with the plot is that the story revolving around the lake-which is bottomless as far as anyone can tell, and is as old as the dinosaurs-is interesting enough to warrant more plot concerning it. 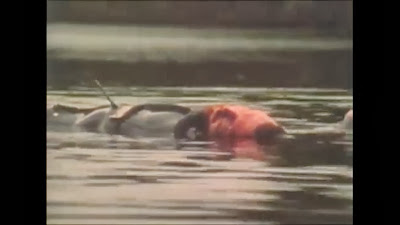 The music is all fine, although at one point, there's some really out of place 70's wakka-chicka cop music.

The effects for the monster, Rana, undoubtedly look bad, but the movie holds itself to the rule of Jaws (wait an hour before showing the monster, and even then, don't show it much). You barely see the Rana costume, so it's not like this is The Galaxy Invader or something...Until the last fifteen minutes that is, and it shows Rana in all his costumed glory. 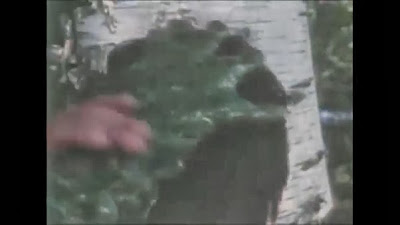 I didn't like the ending of the framing story much, but it wasn't as bad as I though it would be. It's when Kelly finishes his story, and goes to the lake with girlfriend Chris. They dive in (Aww man, they're so dead!), swim down until they find a large subterranean cavern that they enter and go deep into (Ah, they're gonna die! I can't look!), and..

Well the reason I wasn't liking it while watching was because I thought it'd be depressing, but thankfully it's not...It's abrupt is what it is! The damn movie ends mid-scene! But hey, if Kelly and Chris didn't die while the movie was going, then I don't have to watch them die, and I can pretend that they both survived unscathed. It's either a win-lose, or a lose-win.

The music in said finale though, is great! It's well-scored, and definitely fits the mood. 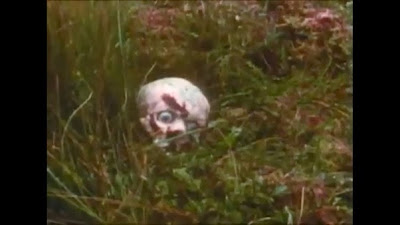 The movie isn't anything to look at, unfortunately, as the quality is so low, you'd think it was kept in Rana's underwater footlocker for a thousand years.

As the first Bill Rebane movie I've ever seen, Rana: Legend of Shadow Lake was surprisingly decent. It sure is no Monster A-Go-Go, that's for sure! I definitely recommend this movie, especially if you're on a Creature from the Black Lagoon kick,.
Posted by Chris Hewson at 8:29 AM