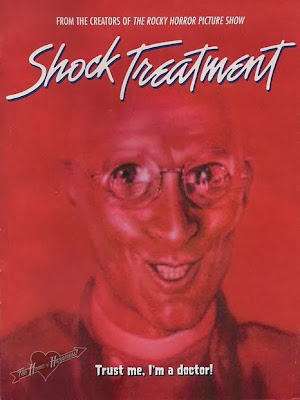 I am a HUGE fan of musical The Rocky Horror Picture Show! I've seen it countless times (at least thirty), have never gotten sick of it, and plan to watch it many a more times again in the future! But what do I think of the sequel Shock Treatment?

Shock Treatment is a rancid piece of shit-a total disappointment to the Rocky Horror name! Why? Because it doesn't have Frank-N-Furter in it, that's why!
...
Of course I'm kidding, but the few people who actually saw this box office bomb in theatres weren't! You see what your ridiculous complaint sounds like, assholes? It's stupid to write off an entire movie as terrible just because it doesn't have a certain character in it! And by the way, have any of those complainers actually read the proper Rocky Horror sequel scripts that Richard O'Brien wrote?! They're awful! Revenge of the Old Queen would have beaten out both The Exorcist 2, and Highlander 2 as one of the worst sequels of all time!

Shock Treatment is about Denton, now D-TV, a giant televion studio and channel. Couple Brad and Janet go to a marriage counselling show, and Brad ends up being committted to the asylum on hospital show Dentonvale, so that media mogul Farley Flavors can try and take Janet for himself... 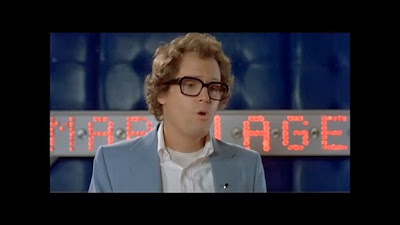 So, Shock Treatment-not a sequel, not a prequel, but an equal! Truer words were never said! This movie has Brad and Janet (the main characters of Rocky Horror), but they're played by different actors. Howeverer, there are many returning actors from Rocky Horror, albeit in different roles, like Richard O'Brien and Patricia Quinn (again as weird sorta-villainous incestuous siblings), Charles Grey as a character who I suppose could be the narrating criminologist from RHPS, and Little Nell, as a sexay nurse! And as returning characters are Ruby Wax and Jeremy Newson as Betty and Ralph Hapschatt (Ruby Wax is only Betty here, but Newson was Ralph in RHPS, making him the only constant actor and character mix in this 'series'). 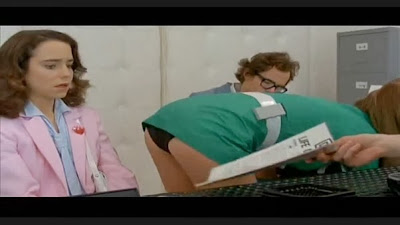 The film has nothing to do with RHPS aside from Brad and Janet, but that's fine-it's not just more of the same. The film is almost like an alternate universe version of Brad and Janet's crazy life, though it could also easily be viewed as a continuation. As for which is better, well Shock Treatment isn't as good as Rocky Horror, but I like it more regardless.

This is an intelligent movie, in its concept, and with its songs. D-TV may have seemed like an absurd and stupid concept back in 1981, but it's extremely prescient, as nowadays there are indeed whole channels worth of bullcrap reality shows that obsess over nothing. We can't get rid of the damn things!

The film's tone is crazy! At times, this movie feels like a level-headed version of Stephen Sayadin's Dr. Caligari, but mostly, Shock Treatment is just as crazy as that movie-it just doesn't have people getting it on with giant wall tongues that bleed candy. 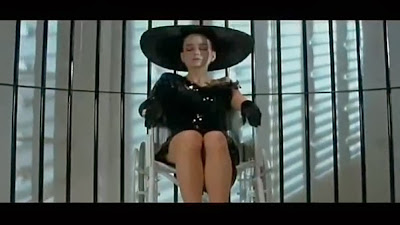 The film looks great, all shot in a television studio, due to budget limitations, which proved to be fortuitous, as it fits the movie thematically perfectly.

The film isn't really a comedy, but there are funny moments throughout. And there's a joke that you'll only understand if you're familiar with The Rhyme* of the Ancient Mariner

*My literacy is too good to stoop to using the Ye Olde Englishe speak and write Rime, or Ancyent. 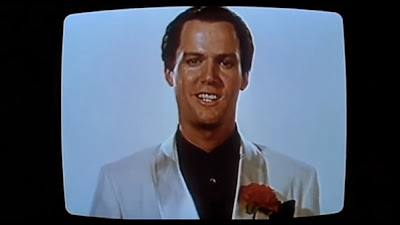 As for the acting, the roles of Brad and Janet were recast, which I don't mind. For one, I don't like Susan Sarandon-at all! I'm glad they recast the role (Sarandon's asking price was too high). As for Barry Bostwick, he was busy with other filming commitments at the time. I prefer Cliff de Young for Shock Treatment, partly because of the fantastic and unnoticable 'double element', and also because Barry Bostwick's Brad was a masculine man, while Cliff de Young's Brad is a wimpy pushover-it works better when there's different actors for the radical change in character. Granted, the best Brad is ultimately Barry Bostwick. 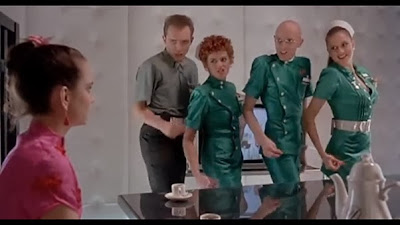 Barry Humphries is loads of fun as Bert Shnick, and Richard O'Brien and Patricia Quinn are both great too! There's one big problem in the cast though-Little Nell isn't in the movie nearly enough!

As for the plot, well, the movie kinda left the plot in its other pants, which is sort-of a problem, but also not. I guess that an intricate plot isn't a thing a movie like this has a need for. The only real problem is that Brad is barely in the damn movie!

The songs here are all great! They're so good that Sal Piro, founder and president of the huge Rocky Horror Picture Show Fan Club likes the songs in Shock Treatment better that the ones in RHPS. 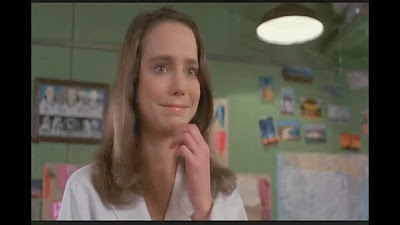 From the funny Bitchin' in the Kitchen, to Lullaby, which is all shot in one take (and follows a verse from deep-voiced Jessica Harper with one from high-pitched Little Nell), to the uber-cool Farley's Song, Little Black Dress, Looking for Trade, Me of Me, In My Own Way, Look What I Did To My Id, Breaking Out, Duel Duet, and Anyhow Anyhow, and the title song, Shock Treatment, all the songs are a blast, and the singing is perfect! Kudos to the great Jessica Harper, and her awesome genre film career!

In any other film, it'd probably be poorly structured that Brad and Farley don't meet until the end, but given what happens in their meeting, with the song Duel Duet, it's great! 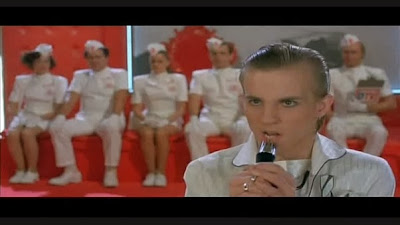 The lyrics of the title song may not make a lick of sense (well, I suppose they do if you do hard analysing), but it's still an awesome tune!

And there's Anyhow Anyhow, which is metaphorical of both being on TV, and sex.

One minor problem is I feel that the placement of Look What I Did To My Id should have been after the revelation about Drs. Cosmo and Nation Mckinley (past presidents and past presidence), rather than before. It would have fitted better thematically. 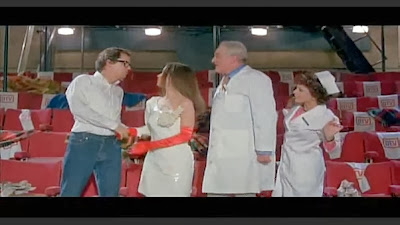 In closing, watch Shock Treatment! Right now! It's absolutely worthy to accompany The Rocky Horror Picture Show in a double feature-and not as a movie b, but as an equal!
Posted by Chris Hewson at 8:55 AM