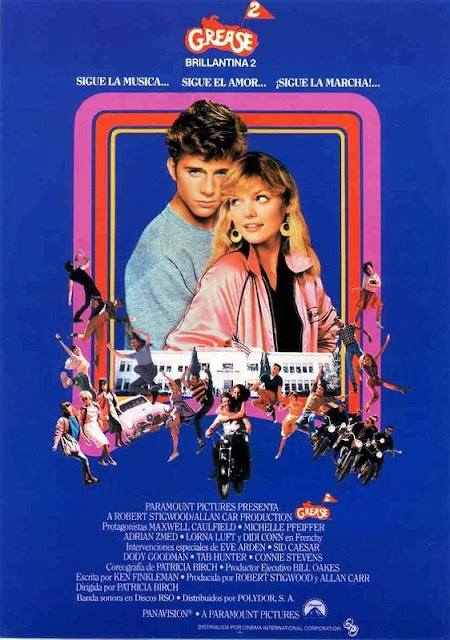 Grease 2 is about Michael Carrington (Maxwell Caulfield), a new student at Rydell High School, who has trouble fitting in, given everyone thinks him a nerd. When he falls for Pink Lady Stephanie (Michelle Pfeiffer), he crafts a cool, sauve, and masculine biker persona to try and sweep her off her feet...

Grease 2 has a reputation for being one of the worst movies ever made, and to all the people who think that, I say-What the hell did you watch?! This movie is awesome!

Now, I can't exactly fully review this movie, as I only properly started watching it from the Reproduction number onwards, but I saw most of it, and definitely enough that I know I love it, and that I know I wouldn't hesitate in recommending it!

*EDIT! I've since seen the full movie. It's still awesome, and I stand by everything I've said in this review.

Good songs are integral for a musical, obviously, and Grease 2 succeeds! It's full of great, fun songs, and fine singing all round.

The movie has a pretty goofy tone, and is a load of fun to watch! The characters are all fun and memorable, even the minor ones (thanks in part to either dialogue, or asthetic-or both). Though there are two problems in the character department that are my only issues with the movie. One is the romance between Michael and Stephanie. It's definitely well-written, and Maxwell Caulfield and Michelle Pfeiffer play off great with each-other, having great chemistry, but until the end came along, they pretty much only had a couple of scenes together-one being a dialogue-full scene, and the other being him nervously stuttering a line to her. And counting the scenes with him as 'The Guy', that was pretty much just a couple lines of dialogue, and a dating montage.

And the other problem is the total lack of Frenchie! She appears here and there in the first half, but halfway through the movie, she just vanishes! She doesn't even show up for the climax, or ending (as far as I could tell).

The acting is all good. Not a bad peformance in the bunch!

I absolutely like Grease 2 better than its predecessor, for many reasons-reasons that I won't state here. I not only recommend it wholeheartedly, but I also suggest that if you want to have a musical day or night, and you have more than five hours to kill, watch The Rocky Horror Picture Show, Shock Treatment, and Grease 2!...
Posted by Chris Hewson at 7:38 AM