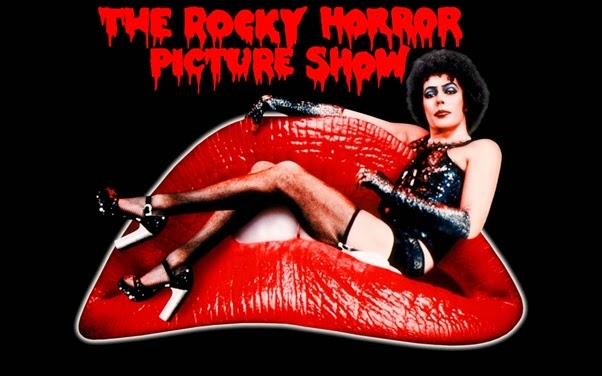 Sit down, and let me tell you a story, ladies and gentlemen. A bone-chilling story of exsanguinatory pleasure, and wrist-snapping horror. This is a story not for the faint of heart, but neither is it a story that the strong could take easily either. This...is the tale of how I first saw The Rocky Horror Picture Show...

...Ok, it's a story with none of those things. My mum was out on holidays, so my brother and I were staying with a friend of hers for a few days. One dark and stormy night (it may have actually been dark and stormy, I can't remember) he put on a taped video tape of The Rocky Horror Picture Show! And it was that same guy who showed me Casino Royale, so I owe a lot of my taste in film to him. Ever since then, when I was a young kid of all of five years old, I've loved The Rocky Horror Picture Show!

Rocky Horror is a 1975 musical goofball sorta horror-comedy film about Frank-N-Furter (Tim Curry), a villainous Transvestite from Transsexual, Transylvania, and Brad and Janet (Barry Bostwick and Susan Sarandon), a couple who go to his castle one night when their car's tire bursts during a road trip to their high school teacher Dr. Scott's house, and experience the most bizarre night of their lives...

When first released back in 1975, Rocky Horror was a flop, but it quickly found an audience on the midnight movie circuit*, and its theatrical runs and rereleases gained some strange habit, such as people throwing various things at the screen, dancing in the aisles, wearing the Rocky Horror outfits, and creating an unfunny and annoying fan comedy commentary.

*An annoying tidbit. One of the reasons that sequel Shock Treatment tanked so hard, and one of the main reasons you've likely never heard of it, is that it was only ever shown in theatres as a midnight release! Naturally, no-one even knew it existed, no-one saw it, it was quickly withdrawn from theatres, and the gods cried out at the great injustice that had been done! Between Shock Treatment and Grease 2, musical sequels don't have all that much luck unless they star Gordon MacRae!

One of the few problems I have with Rocky Horry is the plot, or lack thereof. It's not so much that there's not much plot (though there isn't), but more that we have no idea who any of these 'strange people' are, or what the point of  their plans/intentions are. That does detract from the movie, but not too much. It's very easy to just put that concern at the back of your head as you sit back and enjoy the movie.

There are plenty other confusing litte things about the movie too. For one, how is calling Dr. Scott 'Dr. von Scott' implying that he was a nazi? If you don't know that that's the film's intent, you won't even get the scene! Also, why does Riff-Raff kill...a certain character before going after Frank? What's with Magenta and Riff-Raff's confusing dialogue right after they [word removed due to spoilers] Frank? What's with the weird one-time fourth-wall break from Dr. Scott?

Also, am I the only one who wished Eddie (Meatloaf) had more to do than sing one song, then get killed?

Onto the good stuff, the movie is extremely rewatchable.

Tim Curry is fantastic as Frank-N-Furter. He's a gleefully demented villain, as are Richard O'Brien and Patricia Quinn as the weird incestuous siblings Magenta and Riff-Raff. Frankie is such a loved character that there are so many fans of this film who are sad about his fate in the end (he was a murderer, you strange people!), and many more write embarrassingly bad* fanfiction where he's the hero.

*Yes, I am qualified to say that. I once sat through 1000 pages of crappy Rocky Horror-Shock Treatment fanfic from this one particular author.

Barry Bostwick is great as the Masculine 50's-McHero Brad.

Little Nell as Columbia, Charles Grey as the narrating Criminologist, and Jonathan Adams as Dr. Scott are my favourites by far, though that really doesn't mean much, since everyone here who isn't Susan Sarandon is awesome!

From the first one, to the last, the songs in Rocky Horror are all fantastic! I would go into them, but I'd just be repeating myself again again, saying how awesome each song is. I will mention a couple of things though.

For one, what is the deal with You'd Better Wise Up, Janet Weiss?! For one, what's it called? That's its title, though there are plenty who think it's called other names, mainly Planet Schmanet Janet (you mean that line that's only in the song once, as opposed to the oft-repeated chorus line?). But mainly, the song's structure is fucked! It goes from part of the song, to dialogue for a minute, then more song, to more dialogue, to more song, then there's more, different sounding song, that many decree a totally different song. You see that pink puddle on the floor? It's my melted brain.

I like In Just Seven Days, I Can Make You A Man already, but I really enjoy it thanks to my knowledge of Charles Atlas and those little comic strip commercials he'd do. And no, I don't know about those from the internet, I know from old comics I'd read when I was a kid, way before the internet was a thing. I like it so much, because it was a somewhat obscure (well, at least for someone Gen Y it is) reference that I got when I was a pre-internet kid.

Strangely, the penultimate song, Superheroes, is always cut out on certain TV broadcasts of the film (and in the American release of the film back in '75). I've no idea why. If it was a mistake, you'd think it would have long since been rectified in the THIRTY-EIGHT years since! And if it's to save time, 1, Then why are they showing a film this long in a tight time-slot, and 2, Why cut out the song that's only a minute long?!

The singing is all great. There's not a bad performance in the bunch!

So, to finish, go watch The Rocky Horror Picture Show. Right now. Then go watch its awesome sequel, Shock Treatment! You'll have a great time!...
Posted by Chris Hewson at 8:12 AM