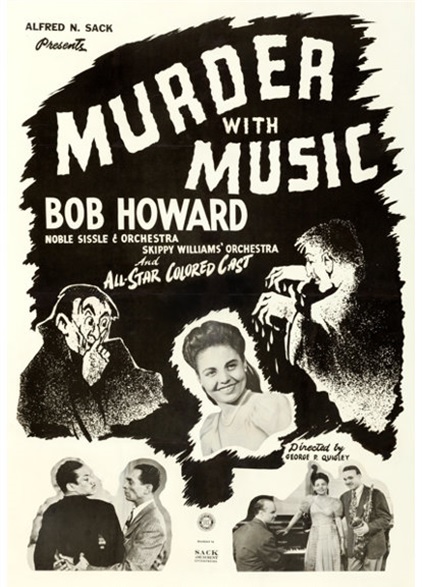 Man, this is a strange movie!


A journalist is in need of a job, and meets with an editor, who rebuffs him, telling a story of the last time he hired a brash young reporter. This employee, Hal, was involved with the beautiful nightclub singer Lola, who's also been carrying on with half the men in town so it seems, including a gangster named Mike who's just broken out of jail. Intent on getting back together with Lola and killing anyone who messes with his gal, Mike is set to make all sorts of trouble. But when someone is murdered, is he the true culprit?... 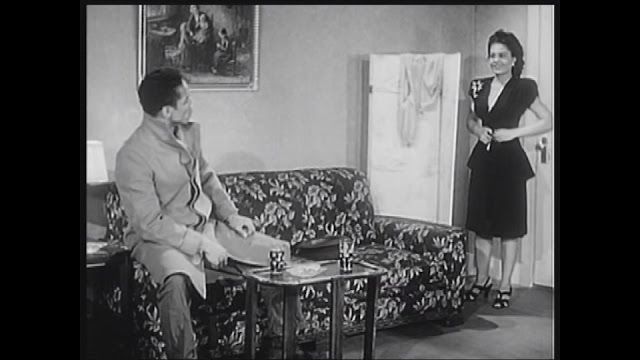 Murder with Music opens with a conversation between a prospective new reporter and an editor. The boss's spiel about why he's not taking on new staff just like that quickly turns into a full on monologue, detailing the personality and home life of one his his reporters, who was chasing a nightclub singer named Lola, who's also fooling around with a guy named Louis, and is in trouble because an old flame of hers has just broken out of prison. That sounds confusing to read, I'm sure, and it's just as confusing to hear, dumped on us all at once without showing us a thing! The film then cuts to a couple (Hal and Lola) sitting down and watching TV in real time, which is absolutely riveting. Afterwards we get an instrumental followed by a musical number (a running theme in the movie, so when you hear a sax playing, get comfortable, because the camera's not cutting away anytime soon). From here on out, this is the film, jumping back and forth between the two guys chatting in the office, scenes that feel like they're from an incomplete narrative, songs, and bizarre non-sequiturs such as a foreign 'Count' who bursts into the editor's office to quickly rant in French and German before abruptly leaving, provoking little reaction from those present.


Any genuine attempts at story are consistently interrupted before they can get going by either dance numbers, musical interludes, or the cast simply doing household chores without speaking. There's one particularly hilarious moment where the song is playing over an actual scene, and drowning out the dialogue. It's only three minutes before the end when the titular murder finally happens! If you're wondering how satisfying a reveal it is, all I can say is that it would've been a lot more satisfying if it'd actually happened when the movie was still going! There's no mystery as it is, with the murder happening and the guilty party immediately being caught! Quick as that, we're back to the Editor's office where the other guy has disappeared between scenes (I guess we'll never know if he got the job or not), and it's nightclub owner Bill's turn to come and chat. The editor asks how things are going with him and his girl Mary, and mercifully the film answers by actually cutting back to their reconciliation, rather than bluntly telling us in this final minute. 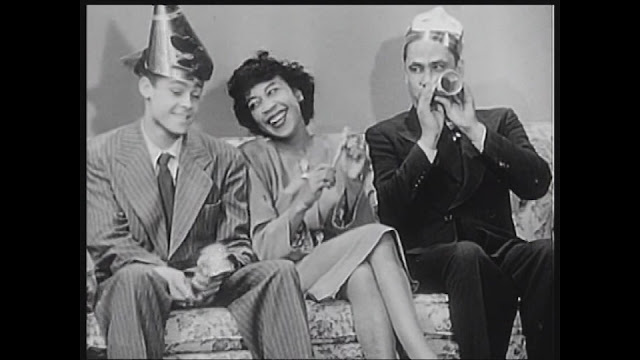 At first I wondered if the bright idea of telling us what happened in the first act instead of showing us was because there'd been an accident that saw the first couple of reels destroyed, and maybe they had to hastily re-shoot, but nope, the whole movie is disjointed like this.

There are far too many characters in this film, even discounting the ones who just vanish into the ether for most of the runtime, like Louis. We've got the two guys in the office, Lola, Mike, Hal, Bill, and Mary, among others. Something in particular that confused me was who the protagonist. Lola is the character who gets the most screentime but she's hardly nice enough to be the protagonist, and it seems less like she's leading Mike on to save her skin and more like she's genuinely falling back into old habits. God knows Hal isn't the lead, spending literally the entire movie crouched behind a chair. The two guys in the office only barely interact with the main plot, so that only seems to leaves us with Jerry the cop, a random officer of the law who seems like he's only there for a quick walk-on role, but sticks around for a while longer, making me wonder if he'd end up becoming the film's detective and true protagonist. Eventually Bill takes up that mantle, having to fix his relationship with Mary, and discover the murderer (it takes him all of 15 seconds, by the way). 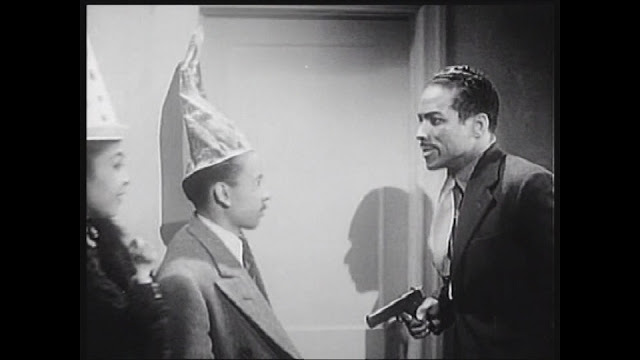 Murder with Music is partially a comedy. How much of what makes you laugh is intentional or not really depends. My favourite scene has to be when the clueless Officer Jerry is being serenaded by the piano, oblivious to the oncoming masqueraders being forced into a closet at gunpoint right behind him. Some of the dialogue is also pretty chuckleworthy too ("She's as crooked as a barrel of worms"). The running joke with the multilingual Count is headscratching at first with how out-of-nowhere it feels, but come the second, third, and fourth reprisal of that joke, it begins to feel more familiar, if still weird. I'm not sure if the joke is overused or not, but the mystique is lost a little by the end. 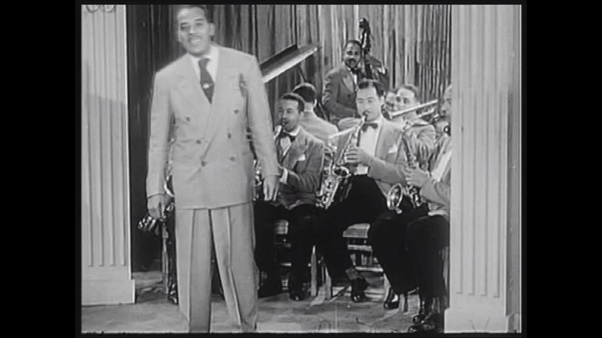 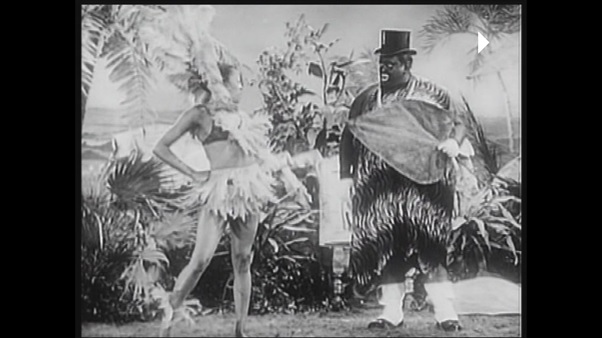 The continuity in Murder with Music is reputedly pretty bad, though I didn't notice much. That doesn't mean the film isn't guilty of such issues, just that I don't have the greatest eye for them. When I went back to check, I noticed appearing dresses, disappearing people, and multiplying glasses, and more. Most noticeable is the murder, where the victim impressively manages to die despite not having a knife in his back. 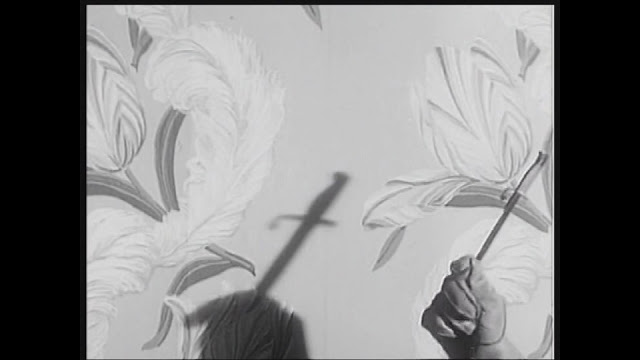 The acting is pretty good. Some performances are worse than others, but most do well. Nellie Hill convinces as the wanton woman, while my favourite actor besides Bob Howard as the good-humored Editor was Marjorie Oliver as the Secretary. One of the biggest positives to Murder with Music is in how as a race film, everyone is black no matter their standing in life, whether rich, poor, newspaper editor or police officer.

Lastly, the music! While the murder disappoints, the music most certainly does not. The instrumental work is all great, as are the tunes themselves, with such artists as Noble Sissie, Skippy Williams, and of course Nellie Hill herself. Even if you have no despite to see this movie itself, I'd still recommend the soundtrack. After all, pictures like this and Stormy Weather torpedoed their cohesion in order to promote them as best they could, so the least we can do is oblige! 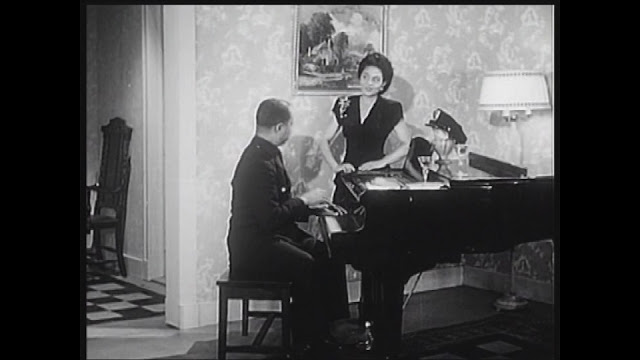 If the idea of watching people watch tv, pour out drinks, and apply make-up, all without dialogue appeals to you, I'm sure you'll love Murder with Music. For everyone else, sure, it's interminable at times, and you'll probably get the superior song named Hello Happiness from The Drifters, but there's still something about this film that makes it a bizarre treat. It's so surreal, whether willfully or not, that you've gotta see it for that alone...
Posted by Chris Hewson at 2:18 AM