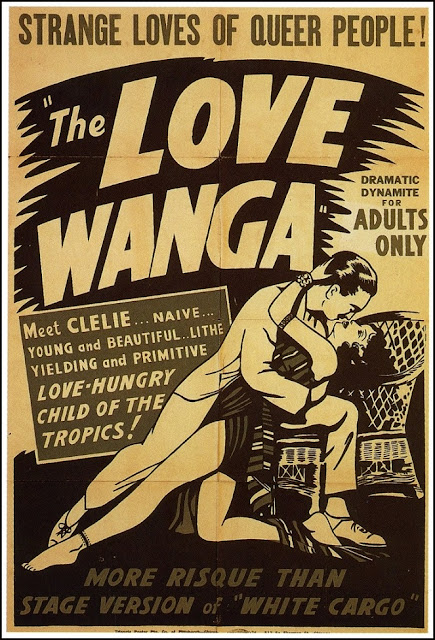 Plantation owner Adam Maynard is returning to his island home in Haiti after two years abroad, where he met and got engaged to the pretty Eve. His old flame Klili is coldly furious at this news, and after one last attempt at winning him back the old fashioned way, she decides to resort to her dark Voodoo powers to get the job done... 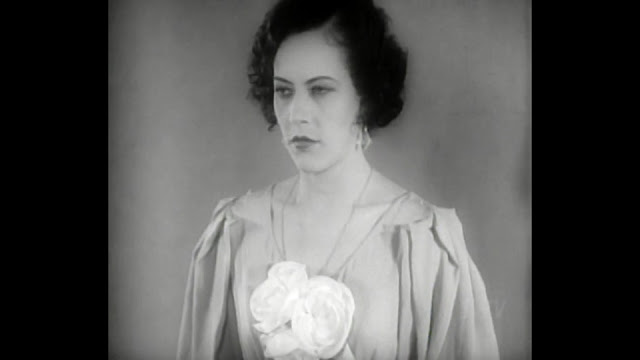 Ouanga (also known as The Love Wanga) is a typical Voodoo chiller from the 1930s. There's a lot to unpack here, so I'll discuss the movie as a movie first. It's ok. The story is simple but effective,   The pacing is decent enough, until the final act. It felt like there were a couple of natural endpoints, but then the movie just kept on going. The ending was also disappointing. We don't even get so much as a final look at the leads before the end, and a bizarre editing decision warps time and undercuts the otherwise cheery conclusion. 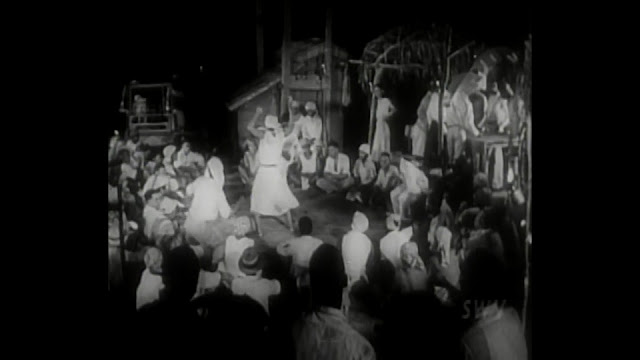 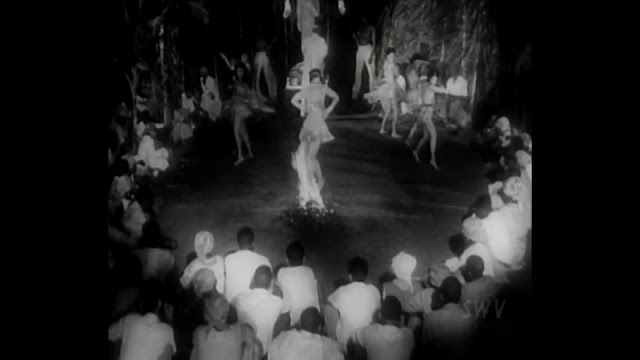 This is an interesting movie in that it straddles the line of either 'This is really damn racist', or 'this is shockingly progressive for its time!'. It cuts no bones about race relations of the time, and the inherent injustices of forced segregation, which were present back then even if the 'darker' person in question is light enough to pass as white.

The movie's portrayal of Voodoo is mixed. Sometimes it's handled in a fun Hollywood Voodoo kind of way, but there's a negativity towards it that permeates the movie. It's treated like it's a demonic cult, when it's actually just a regular African religion. More than that, it's also a legitimate denomination of Catholicism, rather than an arcane black art. 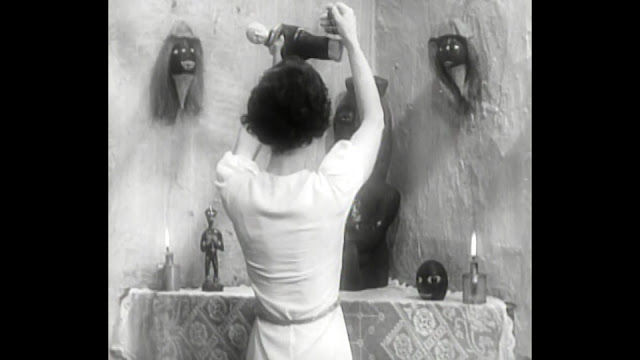 As for its portrayal of Haiti, that too is mixed. On one hand we see black people holding regular jobs besides serving positions, and some even own whole plantations, but on the other hand there's a lot of almost demeaning moments seen, like how the workers refer to Adam as 'Master', or the general attitude some characters have. With any luck, this wasn't the attitudes of the filmmaker, but rather the opposite.

The characters are ok to varying degrees. Adam is a bastard. No doubt about it. I don't think there's a moment where he's presented as even remotely likeable. He treats his manservant like shit, he's too damn privileged to carry his own darn luggage, and he has all the airs of an arrogant colonist. You can just feel the resentment in his voice at these foreigners for daring to be foreign. Especially uncomfortable are his threats to horsewhip black people to get what he wants! Like, dude, I know you wanna get your kidnapped fiancee back, but unfortunate implications, please! 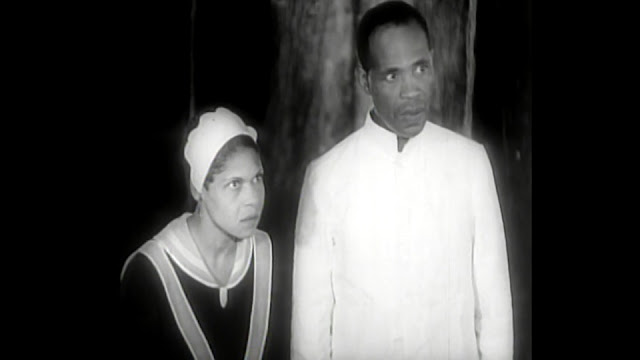 Then of course is his shocking racism to Klili. Throughout the film he utters such 'choice' lines as "The barriers of blood that separates us can't be overcome.", and "No Klili, you belong with your kind." What the fuck did he just say? Jesus Christ! It's a wonder Klili even wants this racist sack of shit back!

Another low moment for Adam is when he's warned about the Voodoo on the island by his servant, then has the balls to chastise him, saying "Now see here Jackson. If I catch you fooling around with that crazy business I'll ship you back to Harlem on the first boat!". Dude, he warned you about the Voodoo, you asshole! 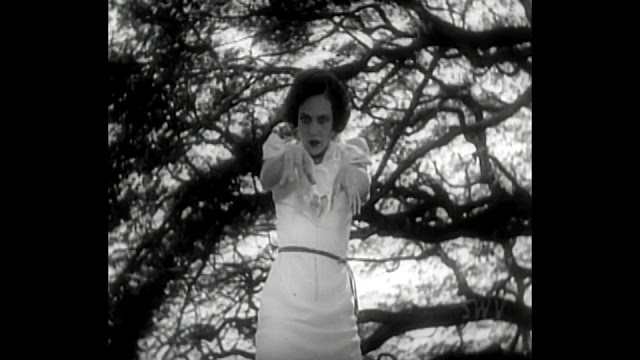 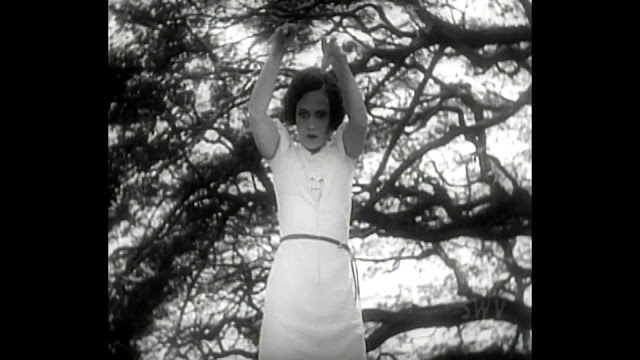 Moving onto Klili, she's an interesting protagonist! And yes, despite Adam being the 'handsome' leading man and ostensibly the good guy, she's definitely meant to be seen as the true protagonist. It's her who's got the juicy character arc, and the interesting struggles, as well; as the main focus. She has her nice moments, and also scary ones. I was particularly amused by her comment when trying to enlist the help of Eve's maid. "There's no need to be frightened!...Unless you refuse to do as I ask.".

Also a major character is LeStrange, the local man who loves Klili-Unreciprocated of course. "You must be mad if you think you can win the love of that sort of a white man" he says at one point. It's the 'that sort of' part that makes me think this story has something to say. If this were just plain racist he would've said 'a white man' and that's it.

This character also exposes a particularly nasty double standard with men over women. If any woman get in Klili's way of winning Adam over, she'll kill them ("If I can't have him, no-one can!"), but when LeStrange is proclaiming if any guy gets in his way by getting together with Kili, he'll kill her! What a creep! Geez louise, no-one comes off with any kind of grace in this movie! 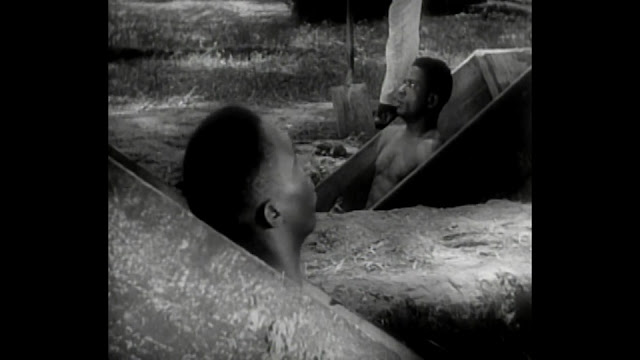 One lrandom thing I found weird was how at the beginning, Klili is gifted with a protective charm, and is told that if it's ever lost or destroyed, she'll die horribly. First of all, how has she survived this long then without it? Secondly, it seems that getting this charm has actually made her worse off, as now that she has it on, she'll be set upon by evil spirits and killed if she ever takes it off. I see a flaw with this particular protective magic!

Filmed on location in either Haiti or the West Indies, Ouanga certainly looks convincing enough, with a few great shots livening things up considerably. The acting in Ouanga is Nothing to write home about. Some are ok (with Babe Joyce and George Spink being pretty cute and funny, respectively), while others fare worse. The best actor by far is Fredi Washington, who delivers a great performance! She nails both her character's sensitive side, and her more malevolent streak, as well as Klili's inner turmoil over her race.

While it is a bit hard to tell with the black-and-white colour of the film, Fredi Washington is indeed black. She was a badass woman who deserves respect. The white community saw her as too dark to be a real human being, but white enough to be an acceptable casting substitute in favour of casting 'socially unacceptable' darker black people. To which she said 'Fuck that!' and consistently refused such roles. This screwed over her acting career quite a bit, but I imagine she didn't mind. She stood up for what she believed in, and if people like me are still singing her praises 80 years later, then it wasn't for nothing. 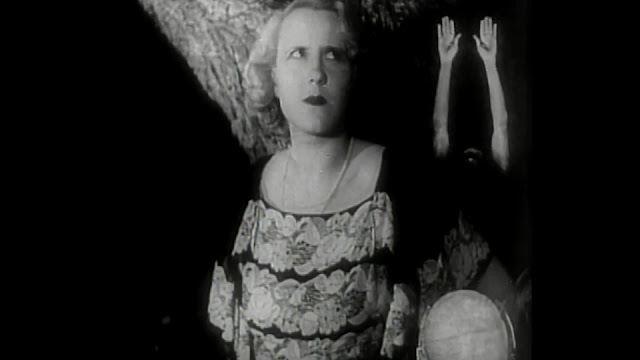 Despite a shaky start, Ouanga is quite an interesting movie, and offers some possible well thought out examinations on race, or perhaps it fails miserably. Maybe it depends on the viewer. In any case, there's a line from Klili that sums up the movie "I'll show him what a black girl can do!". Sister, you show him!... 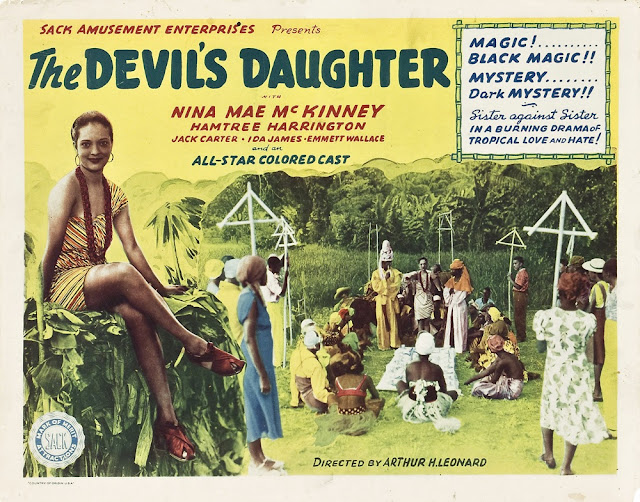 Sylvia is a young woman returning to her family's banana plantation in Jamaica. Her father has recently died, leaving the business to Sylvia in his will, much to the fury of her half-sister Isabelle, who's determined to use her Obeah magic to frighten her sister away and take back full control for herself... 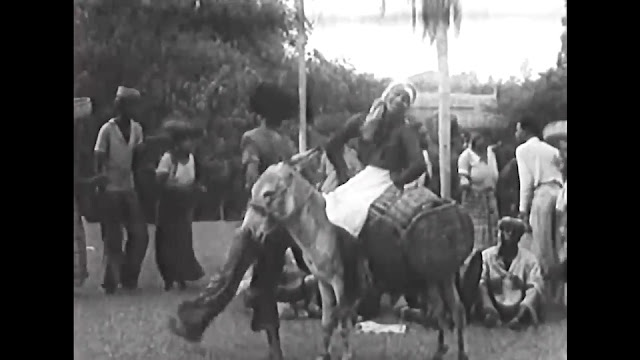 I'd heard The Devil's Daughter was a remake of Ouange, and it does credit the old film in its credits, but this film more uses the bones of that story to craft an entirely new tale, and even that is being generous given how different this is. If there was no credit to the other film's writer, I never would've known this was a remake, not even through me watching them both back-to-back. I suppose this means it passed the golden rule of re-imaginings. Always strive to be different!

This movie was a little boring to start, with a meandering group song and dance number. Once it properly get started, The Devil's Daughter has an infectious charm. Less of a horror film and more of a comedy to start with, I welcomed this unexpected different genre, but that comic relief ends up fading into the background, while the story at the forefront is predominately a family drama. The story is decent, though never really gets time to grow and develop over the scant 51 minute runtime. Then there's the ending, which trips over itself in a hurry to wrap things up in the most ludicrously upbeat way possible. 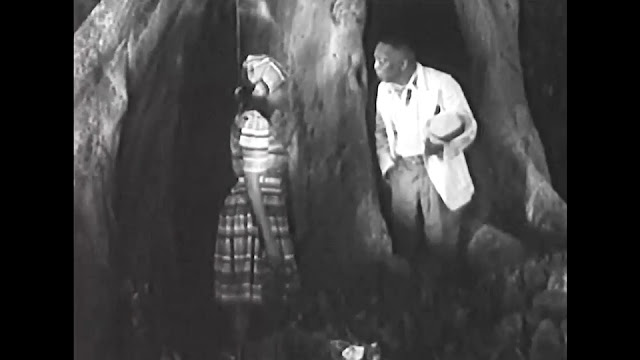 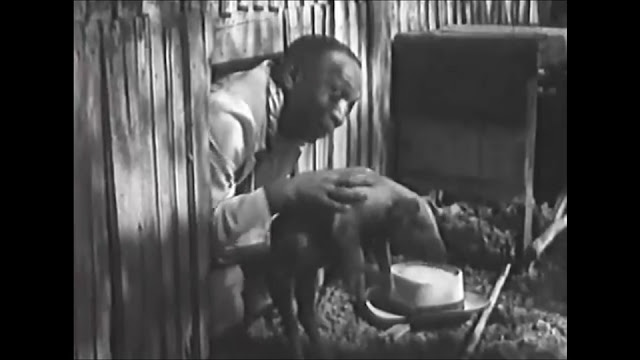 I don't begrudge The Devil's Daughter for not really being a horror film, but I do mind that it completely and utterly fails to make its portrayal of Voodoo scary, thus robbing the climax of a lot of tension. Everyone just looks so jolly, like they're genuine practitioners who are just having a fun day out on the knoll, singing songs and breaking bread, so to speak.

While the commentary on interracial romance is gone, we're still given interesting material on attempted assimilation and a woman trying to make her way in the business world when both your gender and skin are playing against you. Both are played pretty subtly though, more subtext than upfront stuff, I think. There's even a little commentary on the dangers of private non-believers leading religions for their own benefits. 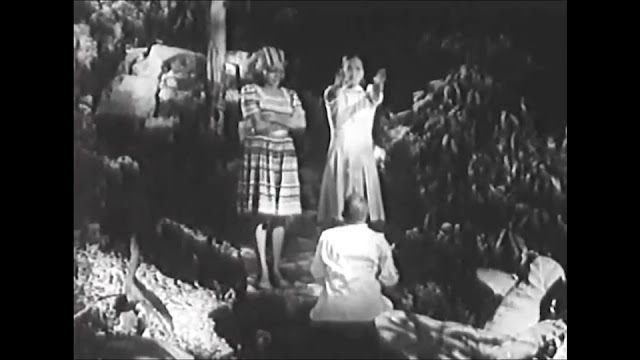 The characters are pretty decent. First there's Sylvia, who I deemed a psychopath the moment she looked at an adorable little piglet and went "Delicious!". That aside, she's pretty sweet, if gullible. In stark contrast to Isabelle, who's given every chance in the book by Sylvia to get off easy with half the plantation at least and more to follow, but refutes them all, demanding all or nothing, and earning everything bad that comes her way as a result, not that things ever reach such a dour point.

The male characters fare a little less better. Love interest John is likeable enough, while the secondary love interest and shady crook Ramsay is an ok minor villain, though the film's short runtime means he spills the beans very quickly! You expect there to be more opposition from this wormy kind of character.

Lastly, there's the comic relief, courtesy of Harlem-based agent Percy Jackson and local maid Elvira, whose duppie-avoiding antics make for the best parts of the movie. 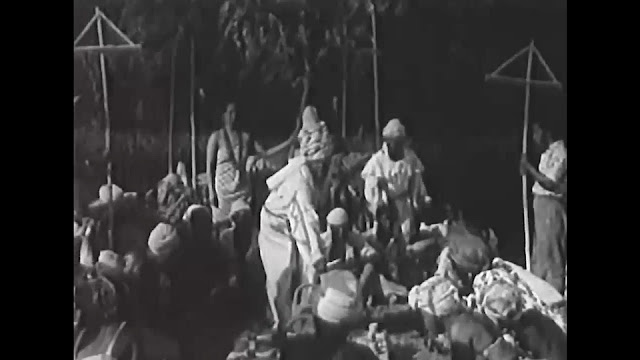 Since The Devil's Daughter was made by African-Americans, they actually know what the hell they're talking about when it comes to Voodoo (Or Obeah in this case, since we're in Jamaica), unlike the sensationalistic white folk behind Ouanga and other movies in the Hollywood Voodoo craze. As hilarious as the cheery demeanours, bird-trilling and overacting of the gathering come across during the 'thrilling' conclusion, they're still a fascinating look into African diaspora religion!

The score is made up of African-American folk singing, and it sounds good, even if the 'Blood song' sounds more like an upbeat romance tune.

The acting is a little amateurish from just about everyone involved, but this drawback aside, most of the performers still get across a sort of homegrown almost authentic charm. Nina Mae McKinney is the best actor, and Hamtree Harrington (excuse me??) is lots of fun. There's some unintentionally  hilarious fight choreography in one scene, and the rather musical ceremonial chanting from McKinney leaves a bit to be desired, both in vocal talent and in harmonising. 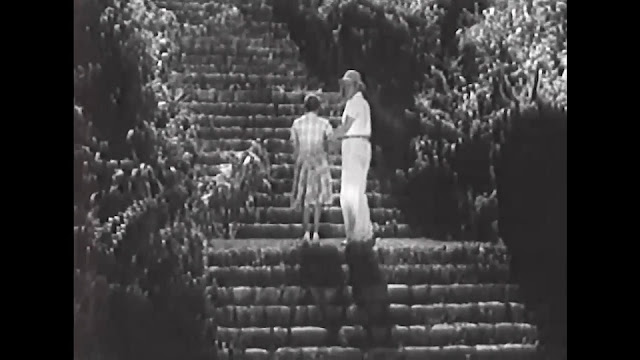 The Devil's Daughter isn't a great film, but it is a great little time capsule into both older African-American culture and progress, and that of Obeah in the 1930s, even if through a fictionalised lens...
Posted by Chris Hewson at 7:35 AM